The contours of India’s energy security strategy have changed significantly over the past few years in light of the mounting concerns over the limited availability of fossil fuels and the national commitments to carbon emission reduction. The government is aggressively promoting alternative energy sources and energy efficiency technologies in order to complement electricity generation from conventional sources. A particularly strong policy push is being provided to solar power generation, which is targeted to increase to 100 GW by 2020. Of this, about 40 GW is planned to be in the form of distributed generation from solar rooftop installations. Net metering is the key policy instrument being used by the government to stimulate private investments in rooftop solar.

Grid connectivity of rooftop installations holds importance because of the intermittent nature of solar power generation. While peak generation takes place during the afternoon, the load tends to be higher in the evening. Further, generation drops to zero during the night. In such a scenario, net metering not only provides a cost-effective alternative to storage batteries, but also creates a revenue stream for consumers. Thus, net metering improves the viability of rooftop projects by maximising the benefits for rooftop owners.

Tamil Nadu, Andhra Pradesh, Uttarakhand and Punjab were among the first states to come out with relevant regulations for net metering in 2013 and 2014. Over a period of three years, almost 26 states and union territories have released policies and regulations to operationalise net metering. However, progress on the implementation front remains slow due to various utility-level challenges.

“As of date, net metering is being effectively implemented in only a handful of states,” notes Jasmeet Khurana, associate director, consulting, BRIDGE TO INDIA. “Andhra Pradesh, Telangana and Delhi are some of the leading states in terms of implementation. Many other states have started implementation but are still ironing out operational issues.”

The concept of net metering is associated with the rise of prosumers, consumers who also engage in the generation of electricity. Net metering is essentially an accounting principle wherein the final electricity bill of the prosumer is generated based on a bidirectional flow of electricity, including the amount drawn from the grid and supplied to the grid.

There are two operational models for such accounting, based on the measurement of gross feed-in and net feed-in. Under the gross feed-in set-up existing in countries like Germany, utilities install primary and secondary unidirectional meters on the prosumer’s premises to separately measure the total electricity exported and imported. Bills are generated based on the difference between the two, given the retail consumption tariff and the feed-in tariff (FiT). In contrast, in the net feed-in model, popular in the US, a single bidirectional meter is deployed. Under this, the electricity generated by solar panels is consumed within the prosumer premises; any excess is exported to the grid and any deficit is drawn from the grid. The bidirectional meter measures the net exports and imports to generate electricity bills.

The impact of either of the models on the growth of rooftop solar capacity depends on the net benefit available to the consumer. In Germany, the rooftop solar capacity increased in response to the handsome FiTs available under the gross model, while in the US, the growth is attributed to substantial returns under the net model. In India, several states including Gujarat, Andhra Pradesh, Uttar Pradesh and Goa allow gross metering of rooftop solar plants; however, net metering based on bidirectional meters remains more popular.

The preference of the state governments for net metering is supported by a recently published report, “Unleashing Private Investment in Rooftop Solar in India”, commissioned by the Solar Rooftop Policy Coalition comprising the UK Department for International Development, the Climate Group, the Shakti Sustainable Energy Foundation, and the Nand and Jeet Khemka Foundation.

The state electricity regulatory commissions in India have been prompt in drafting regulations enabling net metering facilities for rooftop solar. The process of finalisation of these regulations was expedited by the availability of model regulations released by the Forum of Regulators in August 2013. The Central Electricity Authority (CEA) also facilitated this by finalising the technical standards for connectivity of distributed generation resources as well as by amending the CEA (Installation and Operation of Meters) Regulations, 2006.

To encourage implementation, the regulations allow discoms to utilise the entire power generated from net metered rooftop solar installations towards their renewable purchase obligation targets. All customer categories are eligible for net metering; however, in West Bengal, the eligibility is limited to institutional consumers.

Meanwhile, significant variations exist in the regulations across states, owing to local grid conditions, the economic situation and policy objectives. Most states provide net metering facilities for projects up to a capacity of 1 MWp, though only smaller-size projects are included under the framework in Madhya Pradesh (0.5-250 kW projects), Uttarakhand (up to 500 kW) and Goa and union territories (1 kWp to 500 kWp). The regulations in Delhi and Uttar Pradesh do not have a cap on project size.

There are also wide variations in the price offered to consumers for net power export. Karnataka and Uttarkhand have the most remunerative tariff structure, with Rs 9.56 per kWh being offered for net metered rooftop projects set up without subsidy. In Andhra Pradesh, Assam, Delhi, Gujarat, Kerala and Maharashtra, the price offered is equivalent to the average power purchase cost of the respective discom.

States like Tamil Nadu, Haryana and Odisha have adopted an energy credit model for compensation. Under this, the net export by the consumer is carried forward to the next billing period as energy credit for adjustment against energy consumed in subsequent billing periods within a given settlement period. This is similar to the model deployed across almost 40 states in the US.

A key drawback of the existing framework is that the regulators have defined limits to individual project sizes. While such restrictions have been imposed for maintaining distribution grid stability, they limit net electricity exports. For instance, to qualify for net metering, the size of the rooftop solar system is limited to 80-100 per cent of the contracted load or annual consumption in most states. In Assam, Chhattisgarh and Gujarat, the system size restrictions are more stringent at 40-50 per cent. In most states, discoms can provide net metering as long as the cumulative capacity to be allowed for a particular distribution transformer does not exceed 15-40 per cent of its capacity. The criterion is relaxed the most in Karnataka, wherein the limit is set at 80 per cent.

A framework has been developed to utilise the net metering facility to improve rural access to electricity. In a first, the Karnataka government launched the ambitious Surya Raitha programme to extend net metering to solar irrigation pump-sets on dedicated irrigation feeders. Under this, farmers can sell the surplus power generated at Rs 9.56 per unit if subsidy has not been availed of and at Rs 7.20 per unit if subsidy has been taken.

Despite the strong progress made on the regulatory front, net metering is yet to be operational in most states, primarily due to utility-level challenges. While most regulations envisage a 60 to 90-day gap between application filing and interconnection approval, the timelines remain uncertain. Ashok Nehra, head, development and strategy, Rays Power Experts, said at a recent Power Line confrence, “A lot of files are still pending with discoms for which net metering approval is yet to be given. For instance, Haryana issued a net metering policy four to five months back, but many projects are still awaiting approval. The major reason for this is that they do not have any notification and they are not even aware about the policy.” 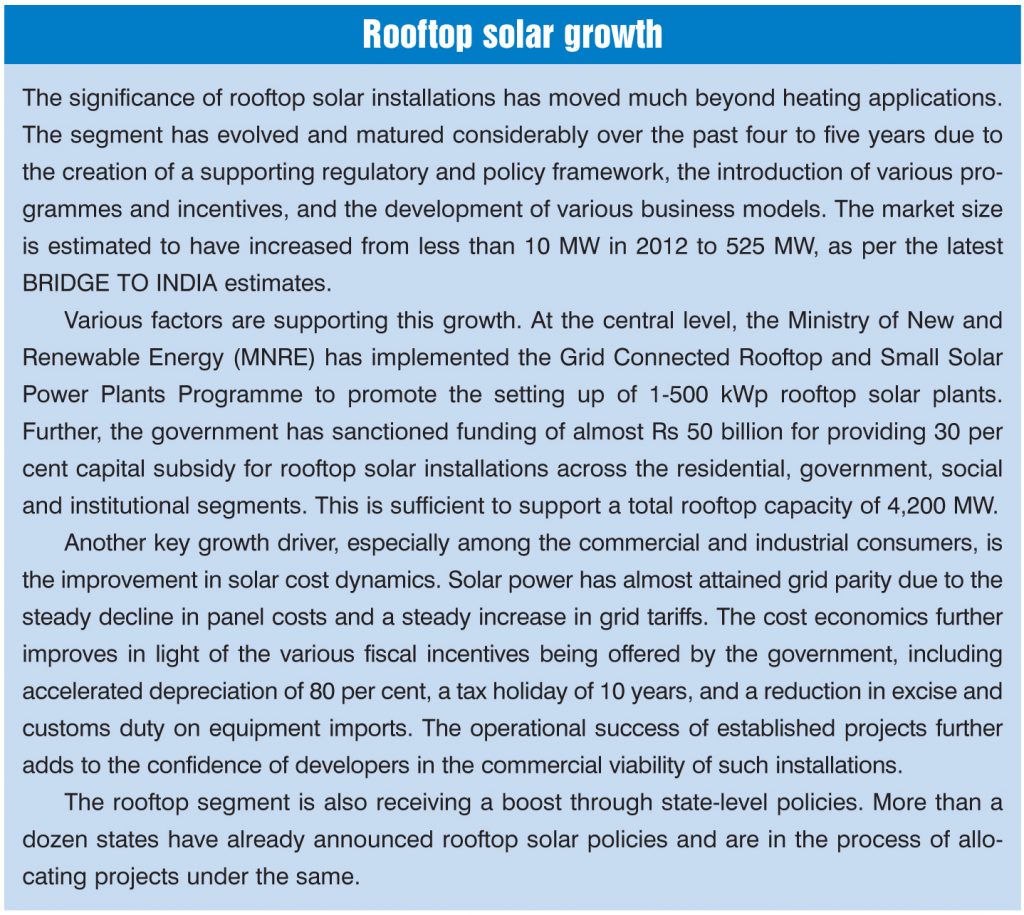 There is a general lack of clarity among discom staff over the eligibility rules under the net metering framework, leading to unnecessary delays in approvals and rejections of applications. Particularly challenging is the regulation pertaining to transformer capacity, as utilities often do not have reliable data on transformer loading. Another implementation challenge is that in states like Gujarat, the policy is valid only for operational projects. Therefore, developers are unable to approach discoms for net metering facilities until the projects is entirely operational.

Meanwhile, despite the benefits of net metering for discoms in the form of reduced load, concerns are often raised about the loss in revenue over the short and medium term. This is a particularly significant concern given that the discoms are already strained financially. There are also concerns that net metering will lead to a rise in tariffs for non-net metered consumers. However, the tariff impact is likely to be low until penetration becomes very high.

Talking about the challenges in the implementation of net metering in Uttar Pradesh which has 35 installations aggregating a capacity of 9.4 MWp, Vikas Chandra Agarwal, director, distribution, Uttar Pradesh Electricity Regulatory Commission (UPERC), says, “Following the directives from UPERC, the state discoms have demonstrated considerable enthusiasm for implementing net metering. The commission has provided the standard agreement to be executed between the discom and the consumer, and stipulated a timeline for the installation of bidirectional meters. However, the key issue faced in implementation  pertains to the limit on the capacity of the rooftop solar system, which is restricted to 15 per cent of the distribution transformer capacity.”

The success of net metering depends on the support of the discoms and the incremental tariffs available to consumers. “Regulations can be tweaked and revised, but the key challenge is in the implementation. Thus, the discoms need to be brought on board to support net metering, as most of them still view the overall framework as being unfavourable to their business,” says Khurana.

The government must create an incentive structure such that the benefits from rooftop solar are shared with the utilities. There is a need for clear implementation guidelines for utility staff to enable effective interpretation of the rules. The establishment of a single-window clearance mechanism and the introduction of well-designed application forms will help reduce the timeline for approvals and make the process simpler for consumers.

On the regulatory front, the existing framework can be refined further in line with the consumer response and best practices. New consumer categories such as group captive generators can be brought under the ambit of net metering. There is a need to define and monitor timelines for new connections as well as impose sanctions for non-compliance. Going forward, the regulations must also address the issue of generation loss by rooftop owners during load shedding.

Meanwhile, the emphasis laid on net metering by the central and state governments is commendable as it will help drive growth of rooftop solar capacity. The establishment of a strong regulatory framework must be followed up by effective implementation. Rooftop solar uptake can increase only through generating awareness and providing clear policy directives.