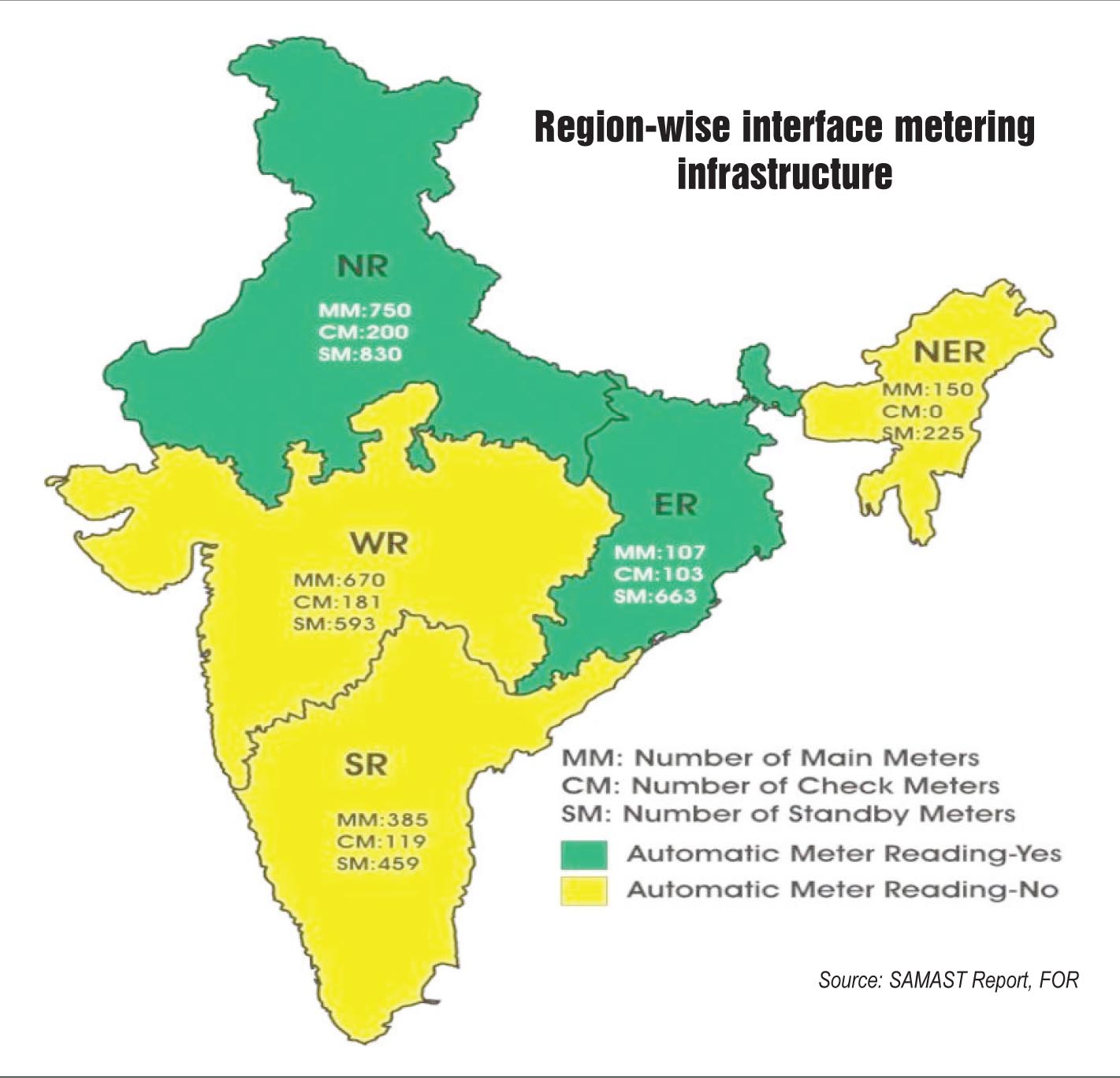 In July 2018, the Central Electricity Regulatory Commission (CERC) passed a landmark order on “Pilot Project on 05-Minute Scheduling, Metering, Accounting and Settlement for Thermal/Hydro, and on Hydro as Fast Response Ancillary Services (FRAS)”. This is in support of the previous orders passed by the regulator to ensure the smooth integration of 175 GW of renewable energy generation by 2022.

The Forum of Regulators (FoR) constituted a technical committee to develop an intra-state-level regulatory framework for seamless renewable integration. The CERC passed the latest order in response to the technical committee’s recommendation (based on the roadmap proposed by a subgroup for the implementation of 5-minute scheduling, metering, accounting and settlement) and Power System Operation Corporation of India’s (POSOCO) request to the CERC (dated May 9, 2018) to implement its proposed pilots on FRAS through hydro projects and on 5-minute scheduling and settlement. The CERC has approved the pilots and directed POSOCO to implement them.

The Indian power market has come a long way from pre-availability-based tariff (ABT) to the implementation of ABT reforms in 2002-03 (15-minute scheduling), open access in 2004 (15-minute trading), introduction of collective transactions through power exchanges in 2008 (hourly bidding), switch to 15-minute bidding in power exchanges in 2012, reserves regulation ancillary services (RRAS) in 2016 and automatic generation control (AGC) pilot in 2018.

Power Line presents the key features of the CERC order… 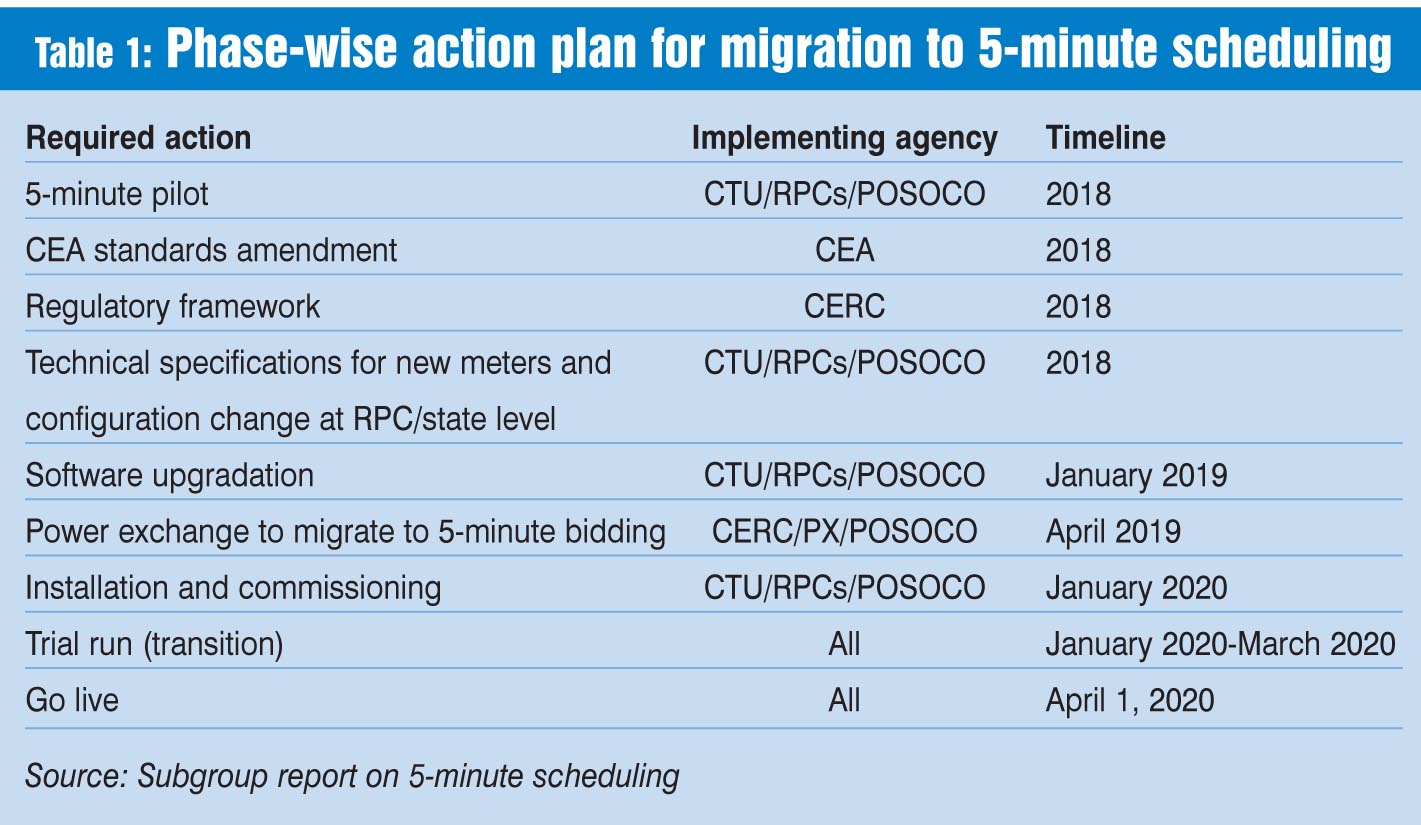 The CERC has observed that 5-minute scheduling has several advantages over the present 15-minute scheduling. These include reduction of reserves requirement, decrease in variability and price discovery closer to real time. It will also bring out the value of flexibility. The implementation of 5-minute scheduling in the US has helped in reducing the regulation requirements of many independent system operators/regional transmission organisations to below 1 per cent of the daily peak load. The report of the NITI Aayog expert group on 175 GW by 2022 also recommends scheduling and despatch on a 5-minute basis, as this will help lower the overall costs for consumers with the decrease in the need for ancillary resources.

In India, POSOCO in coordination with the CTU will implement 5-minute metering at hydro stations in the northern, eastern and north-eastern regions, and thermal stations with AGC installations in all five regions to gain experience. This will help in formulating or further refining technical specifications and software requirement specifications for metering software at the regional load despatch centres (RLDCs) and accounting software at regional power committees (RPCs) for 5-minute metering.

Under the pilot, the 5-minute and 15-minute metering and accounting would be done in parallel. The order notes that all interface energy meters (IEMs) procured in future should be able to record energy use (including voltage and reactive energy) at 5-minute intervals, have frequency resolution of 0.01 Hz and provide auto-time synchronisation through GPS. The technical specifications for IEMs, AMR and meter data processing for interstate systems in the western region approved in the Western Regional Power Committee meeting held in July 2017 may be used for the pilots until the Central Electricity Authority (CEA) notifies new IEM standards for 5-minute metering. Meanwhile, the CEA has been requested to expedite the revision of amendments to the metering standards.

In line with the existing CEA regulations on the installation and operation of meters, the central transmission utility (CTU), Power Grid Corporation of India Limited, must facilitate the pilots through the installation of 5-minute meters at pre-identified locations in coordination with POSOCO. The CTU is required to do so by the end of August 2018. It can claim reimbursement of the procurement and installation costs through a petition to the CERC. 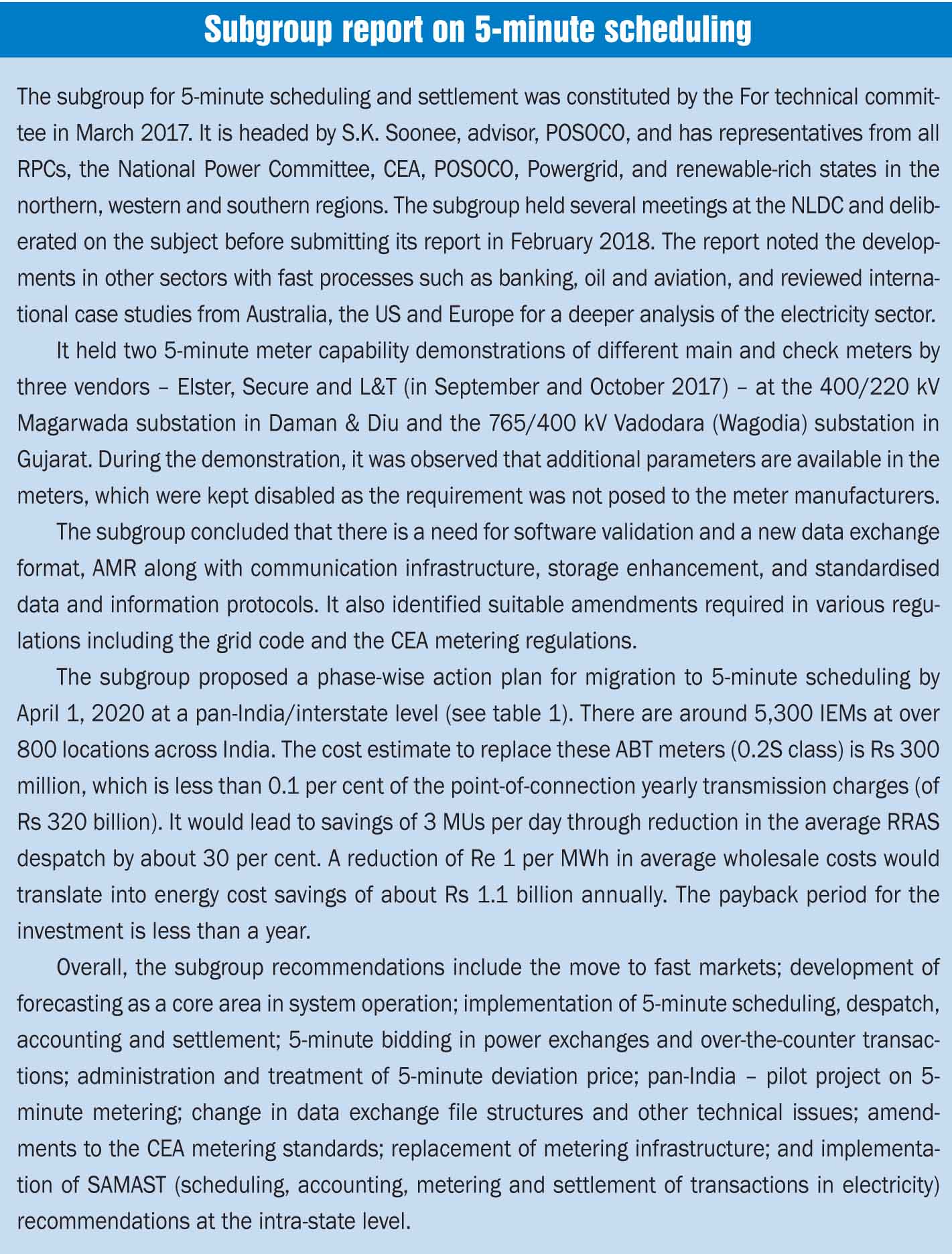 With respect to the operationalisation of reserves, primary reserves have been ensured through suitable amendments to the grid code while the ongoing pilot project on AGC will ensure secondary control. Slow tertiary control is available through the RRAS, which has been in operation since April 2016. RRAS predominantly utilises thermal stations, which are “ramp limited resources” (due to their ramping limitations). Hydro stations are “energy limited resources” due to constraints in terms of water inflows, but can respond much faster than thermal stations. Therefore, the FRAS from hydro stations can be used primarily for regulation service from storage-or-pondage based hydro stations to handle sharp fluctuations such as those observed at the hour boundary. Fast response ancillary can act as a mechanism to handle the intermittency associated with renewable generation.

POSOCO must implement the FRAS pilot covering all central sector hydro generating stations. In this regard, all constraints declared by the hydro stations must be honoured and the declared total energy delivery over the day must be maintained.

FRAS will be triggered based on a stack prepared on the basis of the balance energy available at hydro stations and despatched without disturbing the schedules of the beneficiaries. The RPCs will issue weekly FRAS accounts along with RRAS accounts based on the information provided by the National Load Despatch Centre (NLDC)/RLDCs. The incentive will be paid from the deviation settlement mechanism pool on a mileage basis at the rate of 10 paise per unit for the pilot project (subject to change) for both up and down regulation provided by the hydro station. No additional fixed or variable charges will be paid for providing FRAS support. The total hydro energy despatched under FRAS will be made zero and hence no energy charges will be payable to them.

The mileage during the day will be calculated based on the following formula:

It may be noted that the triggering of FRAS will be based on the balance energy available at hydro stations, which will be at zero marginal cost for the station. In contrast, despatch from thermal stations is based on variable charges. The mark-up or incentive provided to thermal stations (50 paise per unit for regulation-up ancillary service and AGC service while 25 per cent of variable charges are allowed to be retained by the generator for regulation down ancillary service) is likely to meet the variable cost associated with fuel price adjustment. Since this is not the case with hydro plants, the incentive is suggested to be paid on the basis of the mileage a hydro generator is able to provide as FRAS. The central hydro stations must cooperate with POSOCO for conducting the pilot and follow FRAS instructions issued by the NLDC. The RLDCs and NLDC will monitor their performance.

POSOCO has estimated an investment requirement of Rs 8.7 million for the implementation of a 5-minute scheduling and Rs 4.98 million for FRAS (see tables 2 and 3). 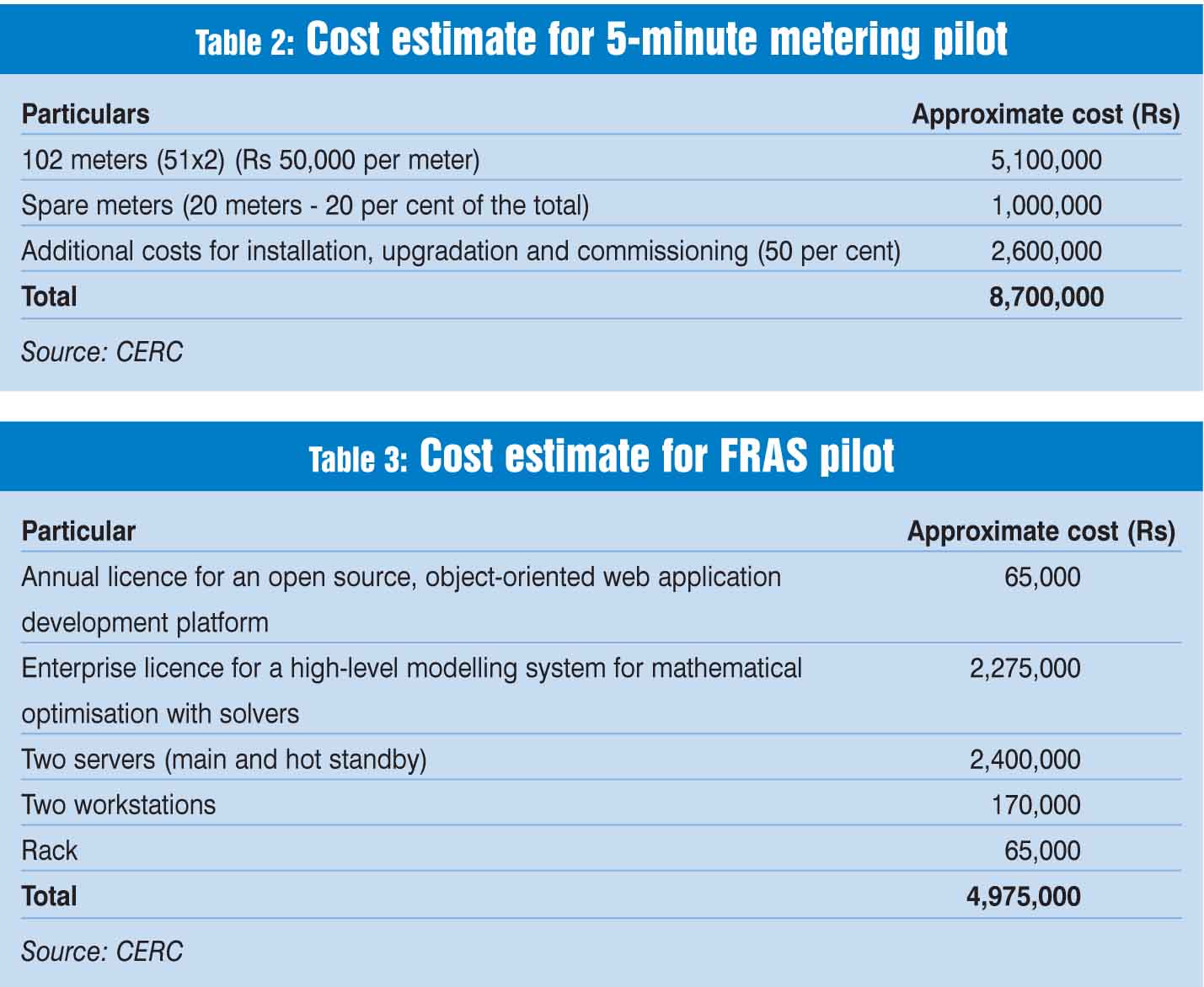 The CERC order directs POSOCO to complete the pilot studies within six months (mid-January 2019) and submit its report on the experience gained from the pilots. This exercise will provide valuable insights including identification of potential teething troubles before the final roll-out. Once fully implemented, 5-minute scheduling will also facilitate the implementation of competing resources like battery storage, electric vehicles and demand response as voltage support ancillary services in the future. Scheduling closer to real time as well as FRAS from hydropower will help bring granularity in grid management, improve power system operation and facilitate smooth grid integration of renewables. Net, net, it will be a leap forward towards faster power markets.