Supervisory control and data acquisition (SCADA) is a system for acquiring and analysing information obtained from numerous devices placed on the electrical grid. A SCADA system can monitor and control hundreds to hundreds of thousands of input-output points. It is one of the earliest adopted tools by Indian utilities for the supervision of grid infrastructure and to move towards a smarter grid.

The SCADA system is used both at the distribution and the transmission level. SCADA and energy management systems (EMS) have been implemented for all the state transmission grids and the five regional grids (a single unified grid since 2013). The implementation at the transmission level took place between 2002 and 2006, while it is still under-deployment at the distribution level. The biggest push to the implementation of SCADA at the distribution level was provided by the erstwhile Restructured-Accelerated Power Development and Reforms Programme [R-APDRP, now subsumed under the Integrated Power Development Scheme (IPDS)], which was launched in 2008 to facilitate the adoption of integrated IT platforms by utilities in large towns. The programme was extended till the Twelfth Plan to enable the completion of the projects. While most of the SCADA projects have been completed, some still remain to be awarded.

A SCADA system is a common process automation system, which is used to gather data from sensors and instruments located at remote sites, and to transmit and display this data at a central site for control or monitoring purposes. The collected data is usually viewed on one or more SCADA host computers located at the central or master site where it is used for controlling and monitoring various grid elements. Apart from measuring voltage, current, active power, reactive power, power factor, etc., SCADA enables monitoring of the status of switches and protection relays, and detecting the occurrence of faults at feeder terminal units.

RTU is a microprocessor-based electronic device that acquires data from MFTs and transmits it to the control centre. MFTs collect data from the metering and other equipment and calculate the values for desired grid parameters such as voltages, current, reactive power, etc. An LDMS or HMI presents processed data to the substation operator. It is linked to the SCADA system’s databases and software programs to provide trending, diagnostic data and management information to the substation operator. A SCADA system also consists of a fault passage indicator, a device which provides visual or remote indication of a fault in the electric power system. 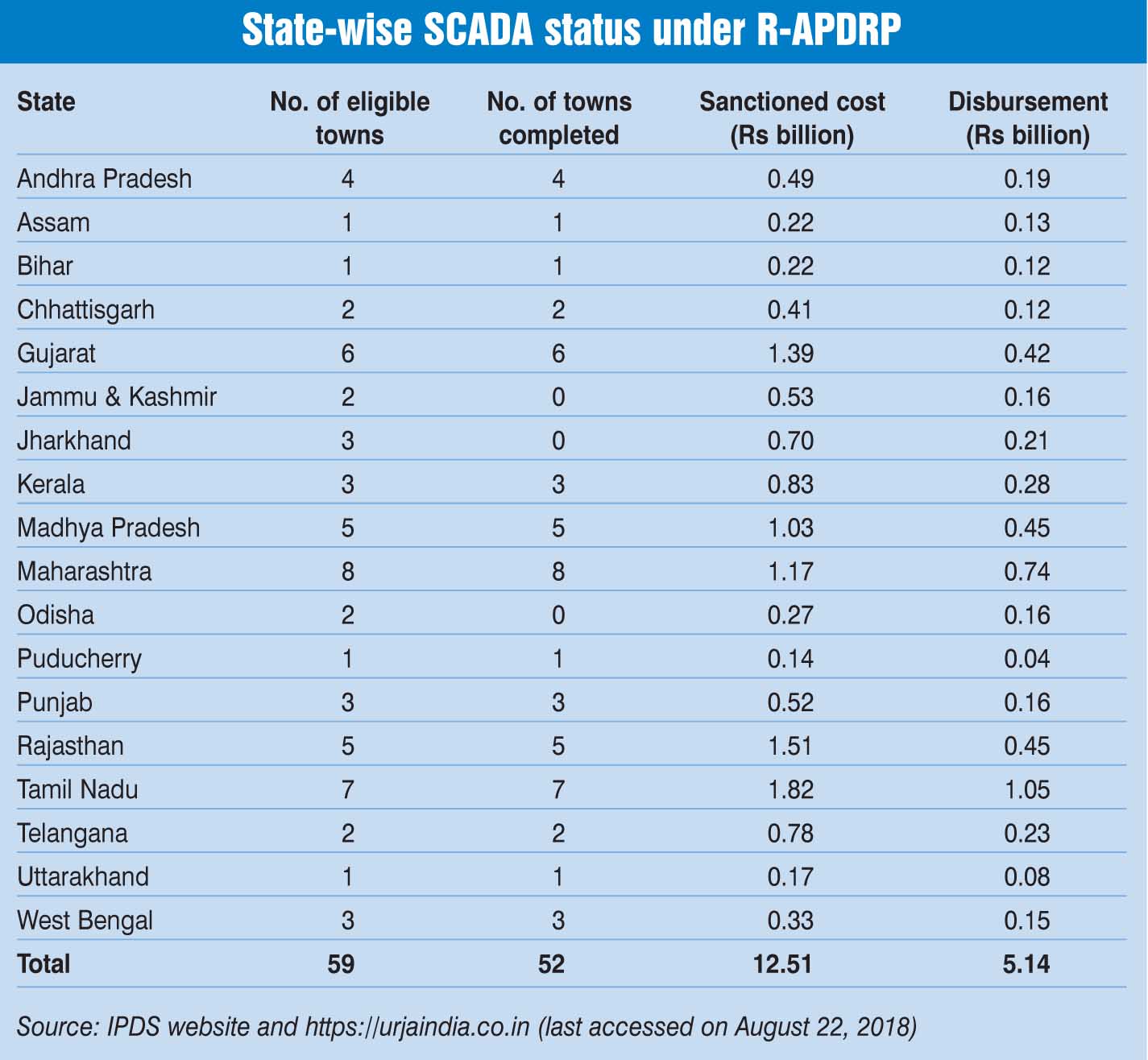 The government has emphasised time and again on the need for SCADA and distribution automation through its various policy and programmes. Distribution automation through SCADA systems directly leads to increased reliability of power and lower operating costs. In a bid to achieve sustained loss reduction through the establishment of automated systems, the government launched Restructured R-APRDP in 2008. It included deployment of SCADA and DMS. However, it was envisaged only for cities with a population of more than 0.40 million and an annual energy input of more than 350 MUs.

As per the Smart Grid Handbook for Regulators and Policy Makers released by the India Smart Grid Forum in November 2017, SCADA/EMS and SCADA/EMS are the key components of a smart grid. SCADA is an integral part of almost all the smart grid projects being undertaken in India. It also identifies SCADA as necessary for distribution automation, which is the focus of all utilities right now.

In the National Electricity Plan, 2018, the Central Electricity Authority (CEA) has mentioned that improvement in the reliability of distribution network can be achieved with the deployment of SCADA/ DMS for remote monitoring and control of various network elements, obviating the need for manned substations. More recently, in June 2018, CEA released the Guidelines on Development of Distribution Infrastructure, wherein it has talked about the benefits of SCADA and the advanced distribution management system (ADMS).

The progress in the deployment of SCADA has been very slow. The timelines to complete SCADA implementation have been extended a number of times, with some states showing negligible progress yet. As per the last revised deadline, all projects were to be closed (including third party verification and submission of closure report with utilisation certificate) by March 31, 2018. However, control centres in 52 towns have been commissioned out of the 59 envisaged towns across 18 states. Of these, 27 are functional. The remaining seven control centres are planned in Jharkhand, Jammu & Kashmir and Puducherry and have witnessed no or very slow progress.

Although Punjab and Rajasthan have completed SCADA installation, they have reduced the quantities of SCADA enablers to be installed. The two states are now expected to increase the same in order to achieve the overall SCADA objective. The government has extended the deadline to complete SCADA projects including third party verification till March 31, 2019, beyond which loans will not be converted into grants. For Jharkhand, the deadline is June 30, 2019 while Jammu & Kashmir is required to award the project by September 2018 in order to be considered for time extension.

With respect to the utilisation of funds allocated to the scheme, only Rs 5.15 billion have been disbursed, about 41 per cent of the total sanctioned costs of Rs 12.51 billion. The disbursements vary between 30 to 60 per cent in the participating states. Odisha, where no project has been completed, has already received 60 per cent of the funds, which is amongst the highest.

While the progress has been slow, once completed, SCADA implementation will definitely help the Indian power sector in reducing system losses, improving system reliability and paving the way for the implementation of smart grids in India. With the deployment of intelligent SCADA systems, huge amount of data is being generated and hence, more and more smart analytics is needed to analyse the raw data and derive meaningful information out of it. Further, SCADA and DMS systems need to be installed in towns other than those covered under R-APDRP. The latest trend in power distribution now is to implement ADMS which unifies SCADA, DMS and OMS.

Meanwhile, transmission has already moved a step ahead and is in the process of implementing phasor measurement units-based wide area monitoring system (WAMS). In existing SCADA/EMS, the field data is obtained from RTUs. As the RTUs are scattered in large geographical area, the data from a cluster of RTUs are concentrated at the sub-load despatch centre level and sent to the state load despatch centres and then to the regional load despatch centres. Thus, there is latency of a few seconds in the data received at the main control centre. Further, this data is not time synchronised. WAMS, on the other hand, acquires current, voltage (both magnitude and phase angle) and frequency that are time synchronised via GPS to a time resolution of 1 microsecond, thereby facilitating better and faster analyses of grid conditions. This will increase the effective capacity of congested corridors, increase transmission asset utilisation and also lower the energy costs to consumers.