In major positive development, Tata Power has emerged as the successful bidder for the acquisition of the Central Electricity Supply Utility of Odisha (CESU), the largest state-owned discom in Odisha, and secured the distribution licence in the state. The company received a letter of intent from Odisha Electricity Regulatory Commission (OERC) in December 2019. CESU will now be operated on a public-private partnership (PPP) basis. Tata Power will form a special purpose vehicle (SPV) in which it will own 51 per cent equity stake while the remaining 49 per cent will be held by the Odisha government. Tata Power will pick up the stake in the SPV at an estimated value of about Rs 1.75 billion.

Praveer Sinha, chief executive officer and managing director, Tata Power, said in an official statement, “Tata Power has several successful PPPs in generation, transmission and distribution in the country. Recently, our focus has been on increasing the company’s existing footprint in electricity distribution through PPPs with discoms. This tie-up with CESU is the latest such partnership in the distribution business.”

The development marks a win-win deal for all stakeholders as it will enable Tata Power to expand its footprint in the distribution segment and double its consumer base, while helping OERC in closing the sale of CESU, which has been pending since 2015-16. The consumers can also expect superior services owing to the advanced technology implementation by the new licensee. Sanjay Banga, president, transmission and distribution (T&D), Tata Power, said in an official statement, “We hope to transform Odisha’s distribution system with 24×7 reliable power and unmatched customer services with extensive social engagement using our existing experience in electricity distribution in Delhi, Mumbai and Ajmer.”

The privatisation of discoms is not new to Odisha. In fact, it was the first state in the country to adopt the privatisation route in distribution in 1999. The state government privatised CESU (previously known as Central Electricity Supply Company of Odisha or CESCO) by selling 51 per cent of CESCO’s equity to a consortium led by the US-based AES Corporation through an international competitive bidding process, while the other three discoms, North Eastern Electricity Supply Company of Odisha Limited (NESCO), Western Electricity Supply Company of Odisha (WESCO) and SOUTHCO were taken over by BSES/Reliance Infrastructure. However, AES unilaterally withdrew from CESCO’s management in 2001 after failing to pay power dues to GRIDCO Limited. CESCO’s licence was subsequently revoked in 2005. OERC made another attempt to attract private participation by selling 51 per cent ownership of the utility within a period of one year; however, it did not succeed. Subsequently, OERC took charge of the utility’s management, under the Central Electricity Supply Utility of Odisha (Operation and Management) Scheme, 2006, and renamed the utility CESU. The scheme, which was initially formulated for a period of two years, has been extended periodically till September 2020.

In 2016, OERC first initiated the process of selling the utility. However, only one player, India Power Corporation Limited, submitted a bid for the proposed acquisition and therefore the bidding round was cancelled. Then, in April 2017, OERC again invited expressions of interest (EoIs) for the acquisition of CESU with the final bid submission deadline as September 2018, which was revised multiple times. Apart from Tata Power, power majors such as the Adani Group, Torrent Power Limited and the Greenko Group were in the fray for acquiring the utility. After more than a year, the results of the bidding were announced and Tata Power emerged as the successful bidder.

Tata Power will now own the licence for distribution and retail supply of electricity in Odisha’s five circles – Bhubaneswar (electrical circles I and II), Cuttack, Paradip and Dhenkanal – for a period of 25 years. CESU is currently responsible for power distribution in these areas with a customer base of about 2.6 million. It utility also has the largest distribution network in Odisha, comprising about 87,700 ckt. km of lines and 251 substations. The average demand of CESU is around 1,300 MW with an annual input energy of 8,400 MUs (2017-18).

One of the key tasks for Tata Power post the takeover of CESU’s distribution operations will be the reduction of aggregate technical and commercial (AT&C) losses. The utility has reported high losses in the range of 30-37 per cent in the past four years (see Table 1). The AT&C losses stood at about 30.5 per cent in 2018-19 and 37.84 per cent during April-September 2019. To reduce AT&C losses, CESU has taken measures such as engagement of input-based franchisees. Currently, 10 of its distribution divisions with over 1.5 million consumers (accounting for nearly 57 per cent of CESU’s existing consumer base) are under franchisee operations. Feedback Energy Distribution Company Limited (FEDCO) is operating as a distribution franchisee in four divisions (Khurda, Nayagarh, Balugaon and Puri) and Enzen Global Solutions Private Limited is working as a distribution franchisee in six divisions (Dhenkanal, Angul, Chainpal, Kendrapara, Marshaghai and Jagatshingpur). The AT&C losses of these divisions varied between 25 per cent and 57 per cent during 2018-19. While the distribution franchisee agreements (DFAs) signed with ENZEN and FEDCO are valid till March 31, 2020, the future of franchisees is unclear once Tata Power takes over. 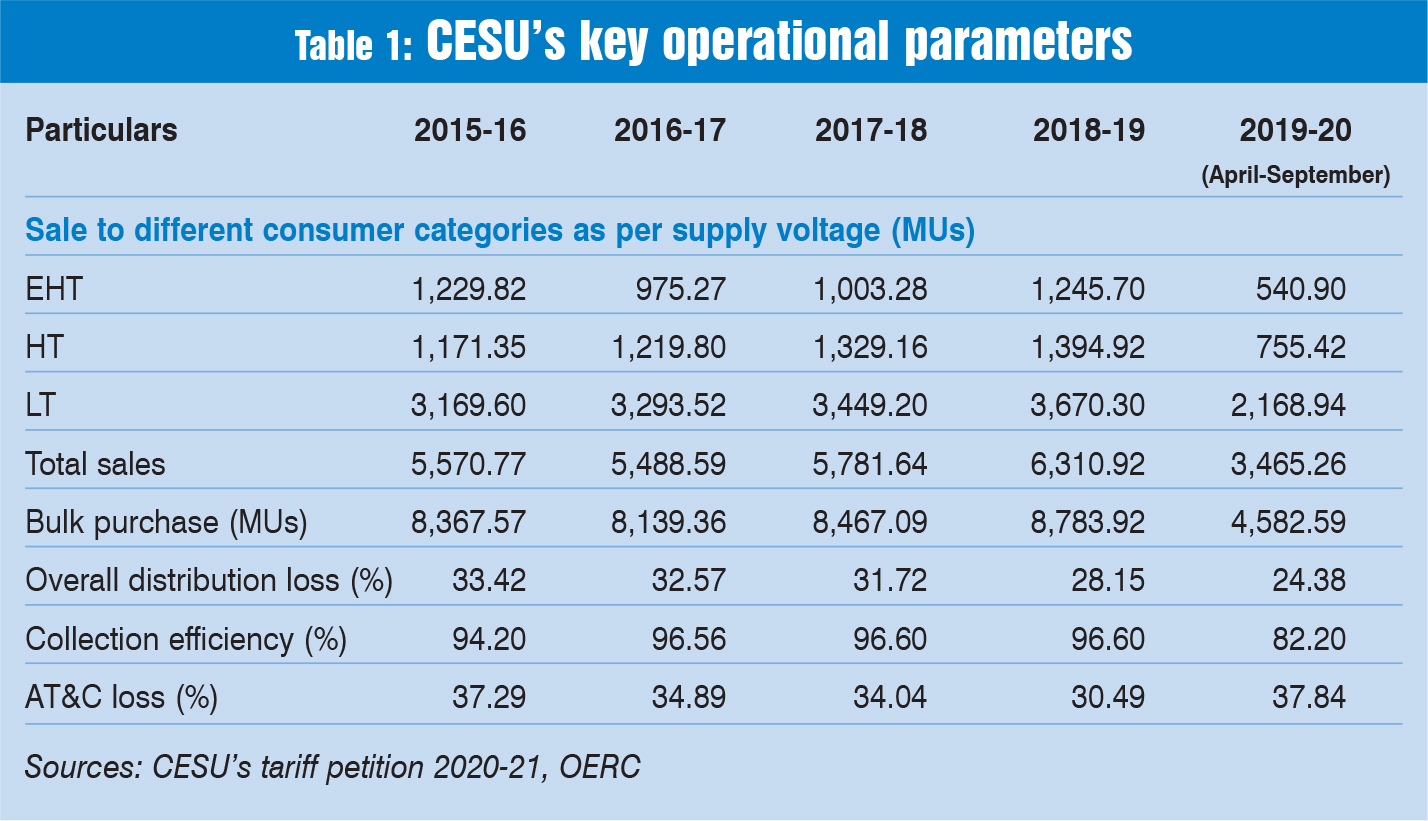 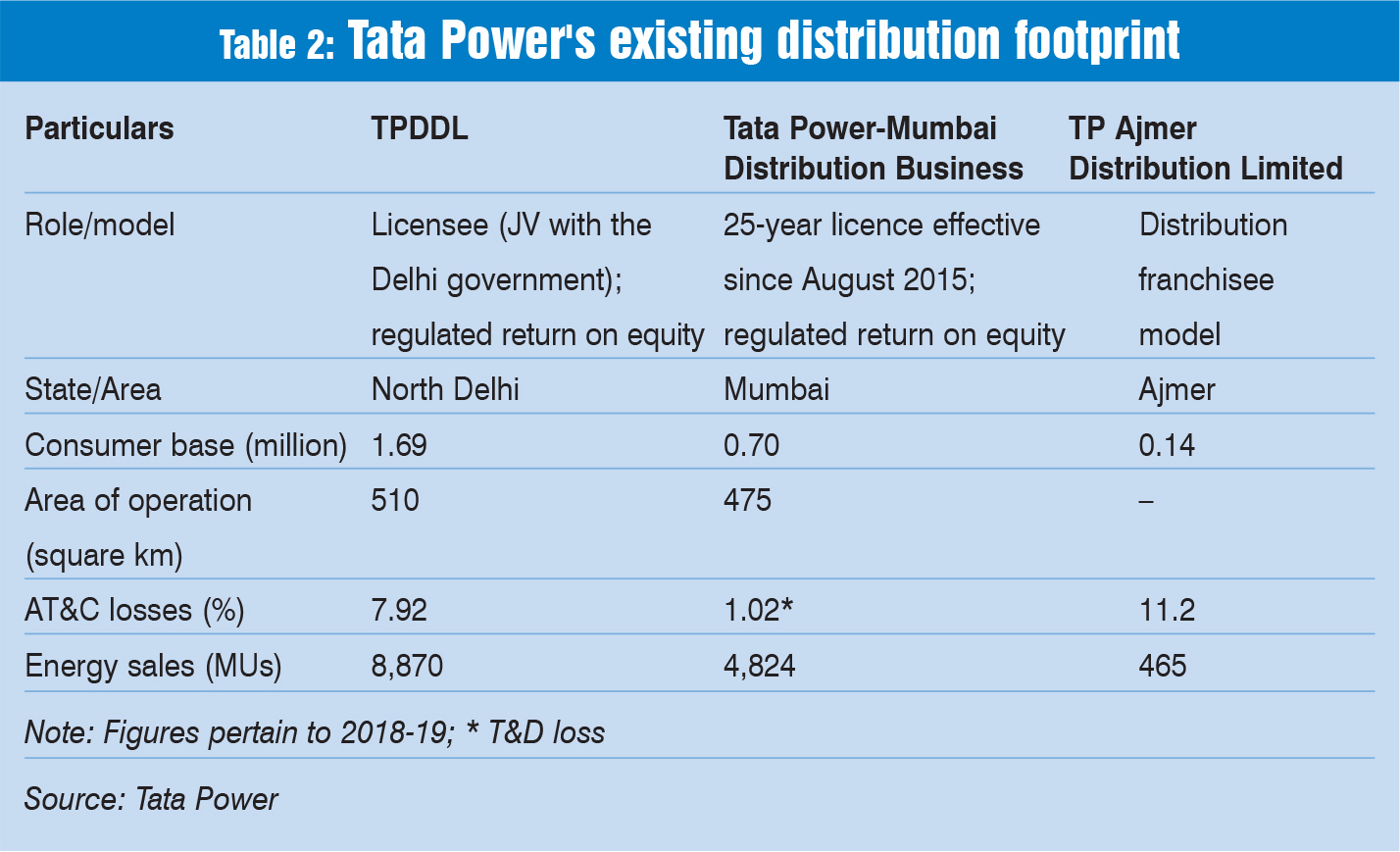 The takeover of CESU by Tata Power is a positive development for the distribution segment, which is facing heavy operational and financial losses. Private participation is needed to bring in the right investment and technology. That said, since Odisha’s previous experience with discom privatisation did not yield good results, it will be interesting to see how Tata Power turns around distribution operations in CESU’s area. In the coming months, OERC is expected to select bidders for acquiring stakes in NESCO, WESCO and SOUTHCO as well. To this end, EoIs have already been invited. In sum, Odisha’s power sector is at the cusp of transformation once again and the results are keenly awaited by industry observers.