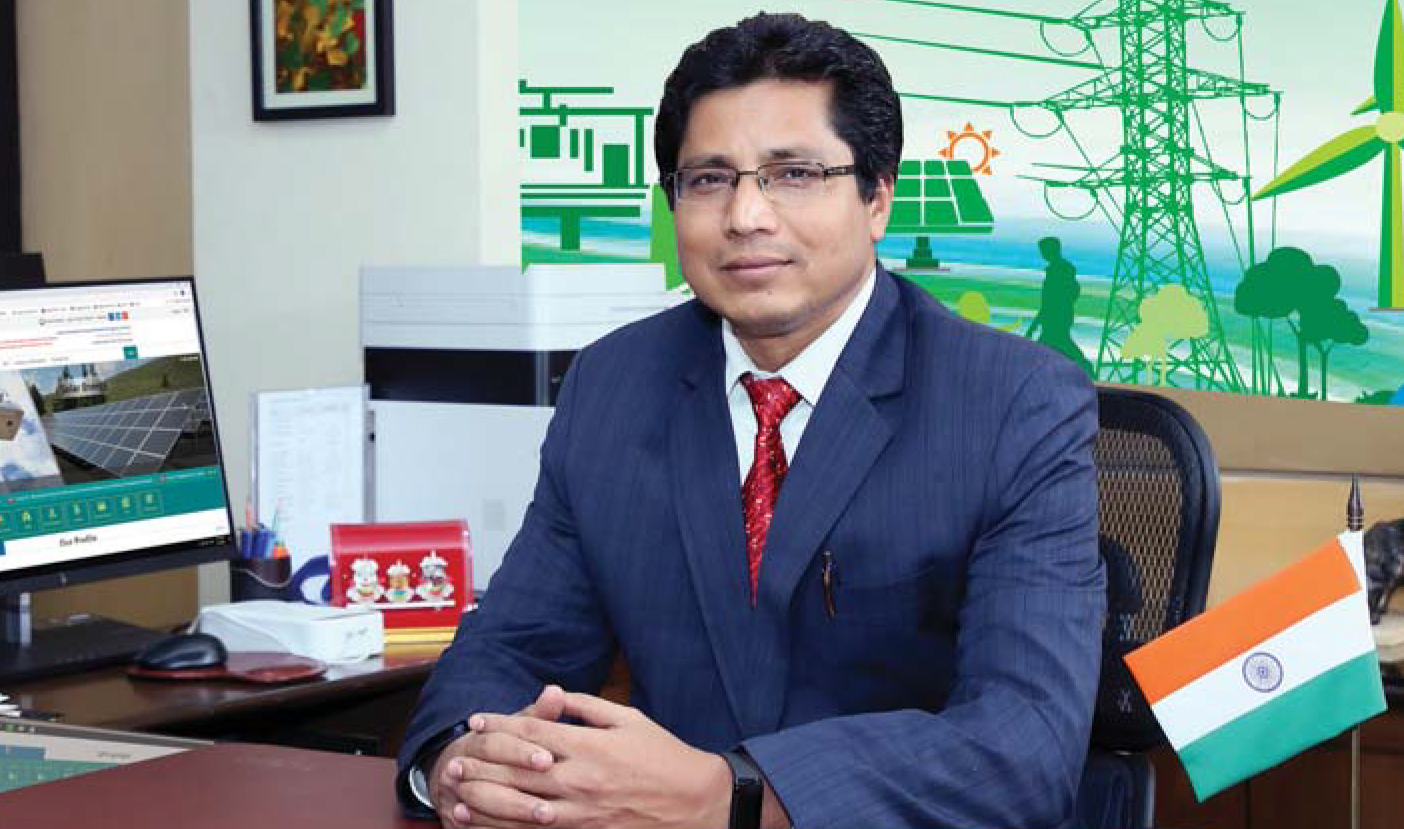 What is your perspective on the current state of the power sector, particularly the renewable energy segment?

India has been moving in line with its action plan to meet the pledge made at COP21 in Paris in 2014, to reduce the carbon footprint to 30 per cent and generate 40 per cent of electricity from renewable energy by 2030. As per the prime minister’s message at the inaugural session of the First World Solar Technology Summit (which was read out by R.K. Singh, minister of state, independent charge, for power and new and renewable energy), we have scaled up our non-fossil fuel-based power generation to 134 GW and we are confident of increasing it to 220 GW by 2022.

At this juncture, India’s total installed power generation capacity has reached over 372 GW (as of August 2020) with thermal plants dominating at a 62 per cent share. Meanwhile, renewable energy (including the large-hydro capacity of 45.69 GW) accounted for a share of 36 per cent (134.34 GW). Moreover, with a renewables capacity of 45.11 GW under construction and 28.43 GW under various stages of bidding, the target of 175 GW is likely to be surpassed in 2022.

Notably, in the auction for 400 MW of solar power with round-the-clock (RTC) supply, the winning bidder quoted a first-year tariff of Rs 2.90 per kWh with a 3 per cent annual escalation for the first 15 years of the 25-year power purchase agreement (PPA) while the equivalent thermal power tariff was Rs 4-Rs 5 per kWh. This is a major breakthrough as it implies that solar power is now cheaper than thermal power, even with storage technologies in place to provide RTC supply. A minimal thermal capacity would be needed in the future as solar power will be as efficient as thermal power with storage and also much cheaper. The government is likely to push for more auctions for RTC and hybrid projects.

Overall, the national target of 175 GW has ensured humongous growth in the field of renewable energy in the country. Today, renewables is the fastest growing sunrise sector in the country, with massive opportunities for investment, credit growth, manufacturing and employment, among others.

What are the main issues impeding the growth of the sector? How can these be overcome in the short and long terms?

In the past two years, owing to prompt corrective action by the Reserve Bank of India (RBI) on several banks, coupled with mounting renewable energy dues and opening of PPAs in the state of Andhra Pradesh, credit availability from various banks/financial institutions has become a challenge, which is likely to continue in the coming period. This may have serious implications for the renewable energy sector. Further, in light of Covid-19, banks and non-banking financial institutions (NBFCs) have started concentrating on their core sectors (such as real estate and consumer finance), which is going to put the onus of the renewable energy sector on systemically important NBFCs like PFC, REC and IREDA.

In the long run, innovative financial mechanisms will be critical to meet the funding requirements of the sector. Also, with the liquidity infusion package of Rs 900 billion announced by the central government, discoms would be able to clear pending dues of renewable energy developers, which would have a positive impact on the investor community. Till September 16, 2020, about Rs 247.42 billion was disbursed out of the Rs 705.9 billion sanctioned under the liquidity infusion package. Moreover, building integrated RTC renewable energy that can compete with baseload curves is expected to address the real needs of discoms and, in turn, financiers. Therefore, integrating RTC renewable assets (hydro, wind and solar) with the latest storage technologies would be critical for the sustainable growth of the segment.

“Innovative financial mechanisms will be critical to meet the funding requirements of the sector.”

What trends do you see in the renewable energy segment in the near term?

The Covid-19 pandemic is likely to impact the renewable energy sector as some short-term issues like reduction in power demand, delayed construction activity and land tie-ups may slow down the growth of the sector. The central government is proactively working towards tackling the challenges posed by the pandemic, and this transitional phase would also pass. We may see the following trends in the near future:

How has IREDA evolved as an organisation over the years? What have been some of the biggest achievements so far?

Since its inception, IREDA has played a catalytic role in the developing market for renewable energy and energy efficiency projects by showcasing the success of financing in the sector. The activities undertaken by IREDA are akin to those of a green bank. Since its inception, the organisation has been making profits and regularly paying dividend(s) to the central government. IREDA was awarded “Mini-Ratna Category-I” status by the Department of Public Enterprise (DPE) in June 2015. Over the years, IREDA has sanctioned loans to renewable energy and energy efficiency projects aggregating Rs 883.7 billion, and disbursed Rs 568.73 billion up to October 8, 2020. The loan book provision of IREDA as of October 8, 2020 is Rs 250.56 billion, supporting more than 17,259 MW of renewable energy capacity. Since 2014, IREDA’s operations, both in terms of sanctions and disbursements, have grown at a compound annual growth rate of 23 per cent and 27.4 per cent, respectively. IREDA has been signing MoUs with the Government of India and its MoU achievement been “Excellent/Very Good”. DPE has awarded “Very Good” rating to IREDA for the year 2018-19.

What are your biggest priorities for the company?

IREDA is committed to maintaining its strong position in the renewable energy financing sector, with its persistent approach to meeting customer requirements and enhancing customer satisfaction through fast processes. IREDA has been regularly introducing new and innovative financial products and is also keen to explore future business avenues such as funding of EVs and associated infrastructure, storage technologies and new technologies such as offshore wind and solar-wind hybrid projects. In the coming years, increased focus on reducing the cost of funds will be critical for IREDA. Further, better monitoring of projects to contain NPAs will be one of the key priorities.

One of the main priorities is to improve the net worth and increase the exposure limits of the company. For this, we have approached the central government for infusion of capital. Once the net worth of the company increases by way of equity infusion, IREDA will be able to borrow more money from the market and also increase exposure in single and group companies. As a measure to widen the sources of low-cost funding, IREDA would like to tap avenues such as capital gains and tax-free bonds. We will also try to obtain infrastructure status from the RBI to enhance the exposure limit in the sector.

What is your outlook for the renewable energy segment for the next two to three years? What are the prospects for IREDA?

India is set for a solar boom over the next two to three years as bottlenecks such as integrating solar farms with the grid have already been removed. The country’s renewable energy capacity is predicted to more than double by 2022. More focus on the development of solar farms will be the key for accelerated growth in the sector. Also, a major segment, rooftop solar, needs to grow faster to reach the ambitious 40 GW target, and bottlenecks relating to net metering in the rooftop segment need to be mitigated for the mass use of solar. Also, innovations for raising low-cost funds for the sector will play a key role in the accelerated growth of the sector. The issue of rupee-denominated green bonds, issue and listing of IPOs, entry of strategic investors such as pension funds and FIIs, credit enhancement guarantee schemes for raising bonds, and merger and acquisition of brownfield projects are some of the interesting trends that are expected to hit the headlines with respect to the upcoming financing scenario in the renewable energy sector. Energy storage and e-mobility are two other upcoming areas that are expected to change the landscape of the renewable energy sector. Given the growth of the sector and new financing models and instruments, IREDA is hopeful to emerge as a pioneer in the growth of the renewable energy sector in India.