Metering is a crucial area for distribution utilities as it is the first step towards energy accounting and revenue generation. So far, system and consumer metering has progressed well in the country though some states continue to be laggards in terms of implementation.

At the all-India level, there are about 214,175 feeders at the 11 kV level, 33 per cent of which are in urban areas and 67 per cent are in rural areas. Notably, the progress of feeder metering in both urban and rural areas stands at 99 per cent each. However, feeder metering is below 50 per cent in a few north-eastern states, including Arunachal Pradesh, Meghalaya and Nagaland.

Distribution transformer (DT) metering has not progressed at a good pace. Out of over 12 million DTs, 83 per cent are in rural areas and 17 per cent are in urban areas. Nearly 68 per cent of DTs in rural areas are unmetered, whereas in urban areas, 43 per cent are unmetered, which is a cause for concern. States like Punjab, Rajasthan and Odisha have low levels of DT metering with progress of less than 15 per cent. The government is laying greater emphasis on DT metering and monthly/bimonthly reviews are being carried out to ensure that targets are met.

On the consumer metering front, the progress varies across segments. It is estimated that there are nearly 300 million electricity consumers in the country, of which 80 per cent (242 million) are domestic consumers, 9 per cent (26.8 million) commercial, 1 per cent (3.4 million) industrial, 8 per cent (23.3 million) agricultural and 2 per cent others. In terms of metering progress, nearly 6 per cent of consumers are unmetered in the domestic segment, 7 per cent in the commercial segment, less than 1 per cent in the industrial, and 61 per cent in the agricultural segment. Uttar Pradesh and Jammu & Kashmir have recorded low levels of consumer metering at 57.11 per cent and 49.8 per cent respectively. In Jammu & Kashmir, significant metering works are being undertaken under various government initiatives including the Integrated Power Development Scheme (IPDS), the Deen Dayal Upadhyaya Gram Jyoti Yojana (DDUGJY) and the Prime Minister’s Development Programme. 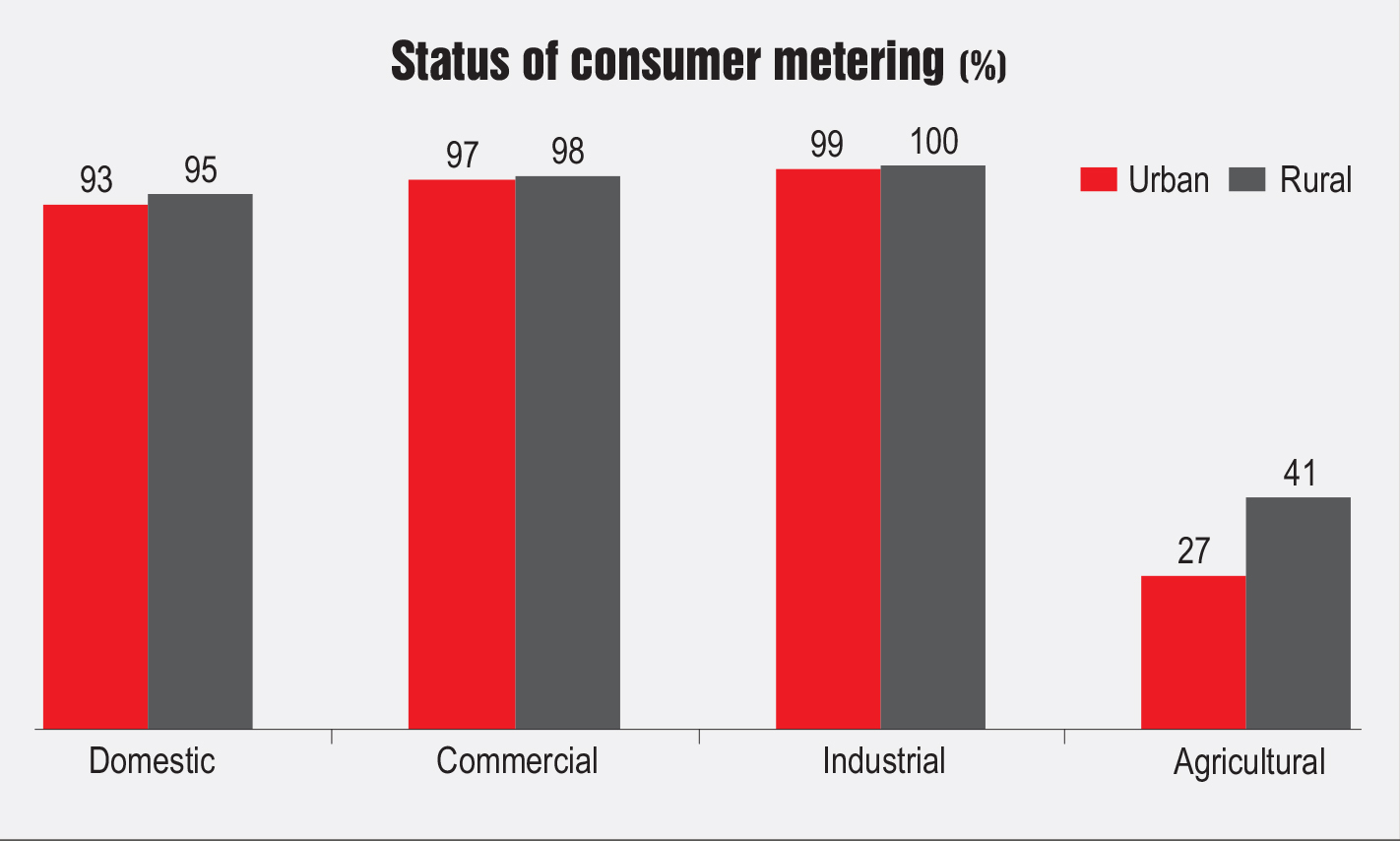 Some of the major government programmes are the IPDS, DDUGJY, the Smart Metering National Programme (SMNP) and the National Smart Grid Mission (NSGM).

DDUGJY: The DDUGJY, Launched in December 2014, DDUGJY is targeted at electrification and distribution strengthening in the rural sector along with metering of DTs, feeders and consumers in rural areas. The scheme has an estimated outlay of Rs 430.33 billion, including budgetary support of Rs 334.53 billion. 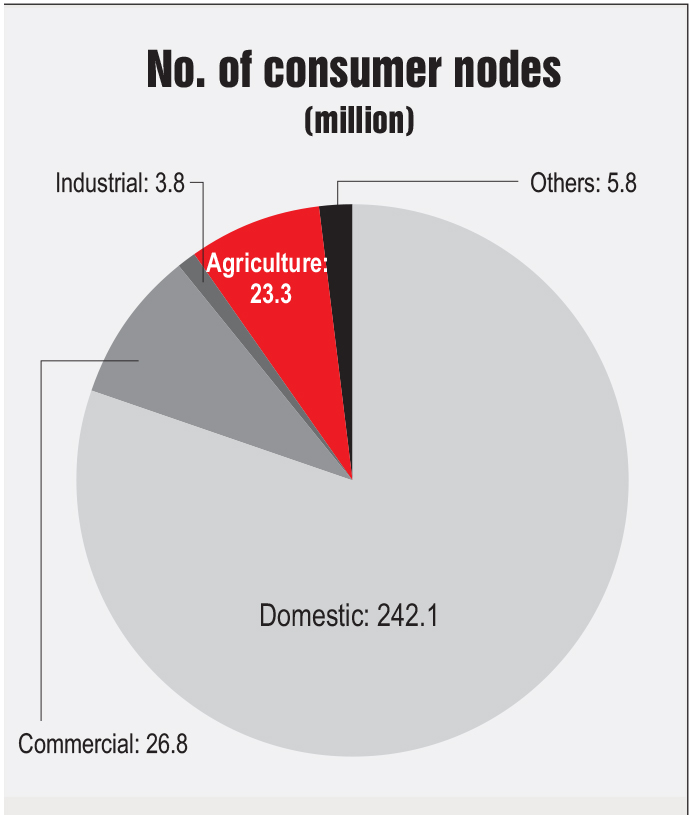 SMNP: Energy Efficiency Services Limited (EESL) is implementing the SMNP with a target to replace 250 million conventional meters with smart meters. The programme is being implemented by EESL through demand aggregation, bulk procurement and monetisation of savings. Recently, EESL and the National Investment and Infrastructure Fund have formed a joint venture, IntelliSmart Infrastructure Private Limited, to implement, finance and operate the smart meter roll-out programme for discoms. Of nearly 12 million smart meters under implementation across the country, EESL is engaged in the installation of 80 per cent. So far, nearly 1.4 million smart meters have been installed by EESL. 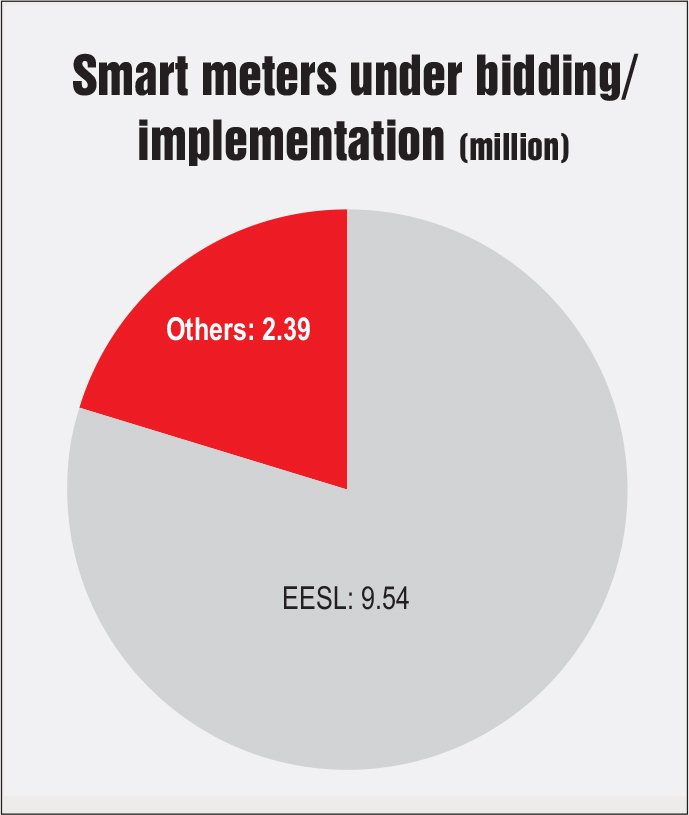 Apart from these programmes, the central government has asked states to move towards smart prepaid metering in three years. The Union Budget 2020-21 also focused on smart metering by utilities. Recently, the long-standing standard bidding documents for totex projects for smart prepaid meters have been finalised, which is a major achievement. They are now available on the NSGM website. In addition, options for a common back-end infrastructure facility for AMI projects are being explored.

Industrial demand was severely hit during the first two months of the lockdown imposed to contain the spread of Covid-19 in March-April 2020. Now the demand is back at pre-Covid levels. Power supply was not impacted because generation and transmission utilities continued to function as essential services. The government also infused considerable liquidity into discoms through loan from the PFC and REC under the Atmanirbhar Bharat Abhiyan. In terms of project implementation, the lockdown impacted the progress of various smart metering projects, but improvements have been observed since July and August. In Uttar Pradesh, areas with smart metering witnessed around 95 per cent billing efficiency as compared to 76 per cent in areas without smart meters. 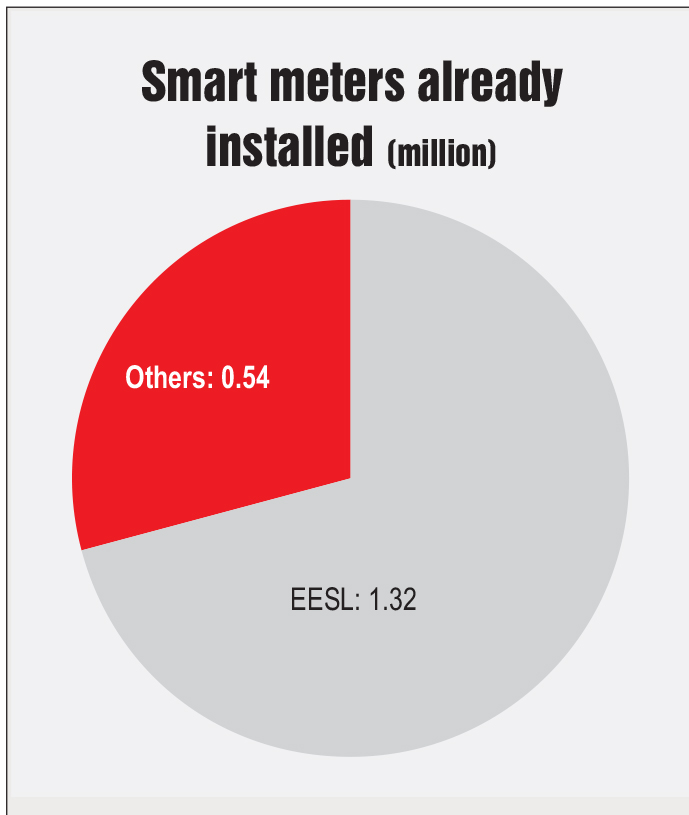 Net, net, smart metering is the way forward for the Indian power sector and the Covid-19 pandemic has further highlighted its importance for distribution utilities. Utilities have increasingly realised that if there had been widespread smart metering in their network during the lockdown, they would not have faced any billing/collection issues and decline in revenues.

Based on a presentation by Vishal Kapoor, Director, Distribution, Ministry of Power, at a Power Line webinar on metering held in September 2020