Madhya Pradesh has been providing 24×7 electricity supply to almost all consumers in the state. Contributing to the state’s efforts to ensure 24×7 power supply is one of its three power discoms, Madhya Pradesh Pashchim Kshetra Vidyut Vitaran Company Limited (MPPaKVVCL). Incorporated in July 2002, the discom undertakes distribution and retail supply of electricity to over 5.5 million consumers in Indore and Ujjain. Notably, it is the first state-owned discom in Madhya Pradesh and one of the few state distribution utilities in the country to record a profit (of about Rs 9.2 billion in 2019-20).

Over the years, the discom has implemented various technological initiatives to serve consumers in a better way. It has also taken measures under various central government schemes to strengthen the distribution system as well as reduce losses. MPPaKVVCL has also installed 120,000 smart meters in Indore and is planning to roll out more smart meters in the near future.

As of March 2020, MPPaKVVCL’s total line length stood at 325,178 ckt. km, of which over 5 per cent is at the 33 kV level, 42 per cent at the 11 kV level, and 53 per cent at the LT level. During the five-year period since March 2016, the line length witnessed a compound annual growth rate (CAGR) of 4 per cent. The majority of the lines are overhead and only a low percentage is laid underground. Further, the utility has 1,448 substations at 33/11 kV and 256,672 substations at the 11 kV level. The total number of substations grew at a CAGR of 8 per cent between March 2016 and March 2020. MPPaKVVCL’s total transformer capacity stood at 28,610 MVA, recording a growth of 5.7 per cent during the same period.

The discom has been executing several projects under the Deendayal Upadhyaya Gram Jyoti Yojana (DDUGJY) and Integrated Power Development Scheme (IPDS). Key works include extensive electrification by laying of new distribution lines and installation of new meters. Notably, under the Pradhan Mantri Sahaj Bijli Har Ghar Yojana (Saubhagya), the company achieved 100 per cent household electrification of 0.4 million connections within 10 months of the scheme’s launch and became the first discom in the country to complete works under the scheme, thereby earning monetary reward from the power ministry. Under the IPDS, projects worth Rs 6.5 billion have been sanctioned by the central government and Rs 3.11 billion has been released so far.

MPPaKVVCL has also executed a feeder separation scheme in order to improve the voltage profile, minimise transmission and distribution losses, and provide 24×7 power supply to non-irrigation consumers and 10 hours to irrigation consumers.

The discom has installed 120,000 smart meters in Indore city and the project turned out to be fairly successful, as it could recover its cost within two years. The discom incurred a per node cost of Rs 8,000 for installation and maintenance for five years. In addition, it has implemented the enterprise resource planning system to streamline project planning, procurement, material management, human resource management, and finance and accounting. 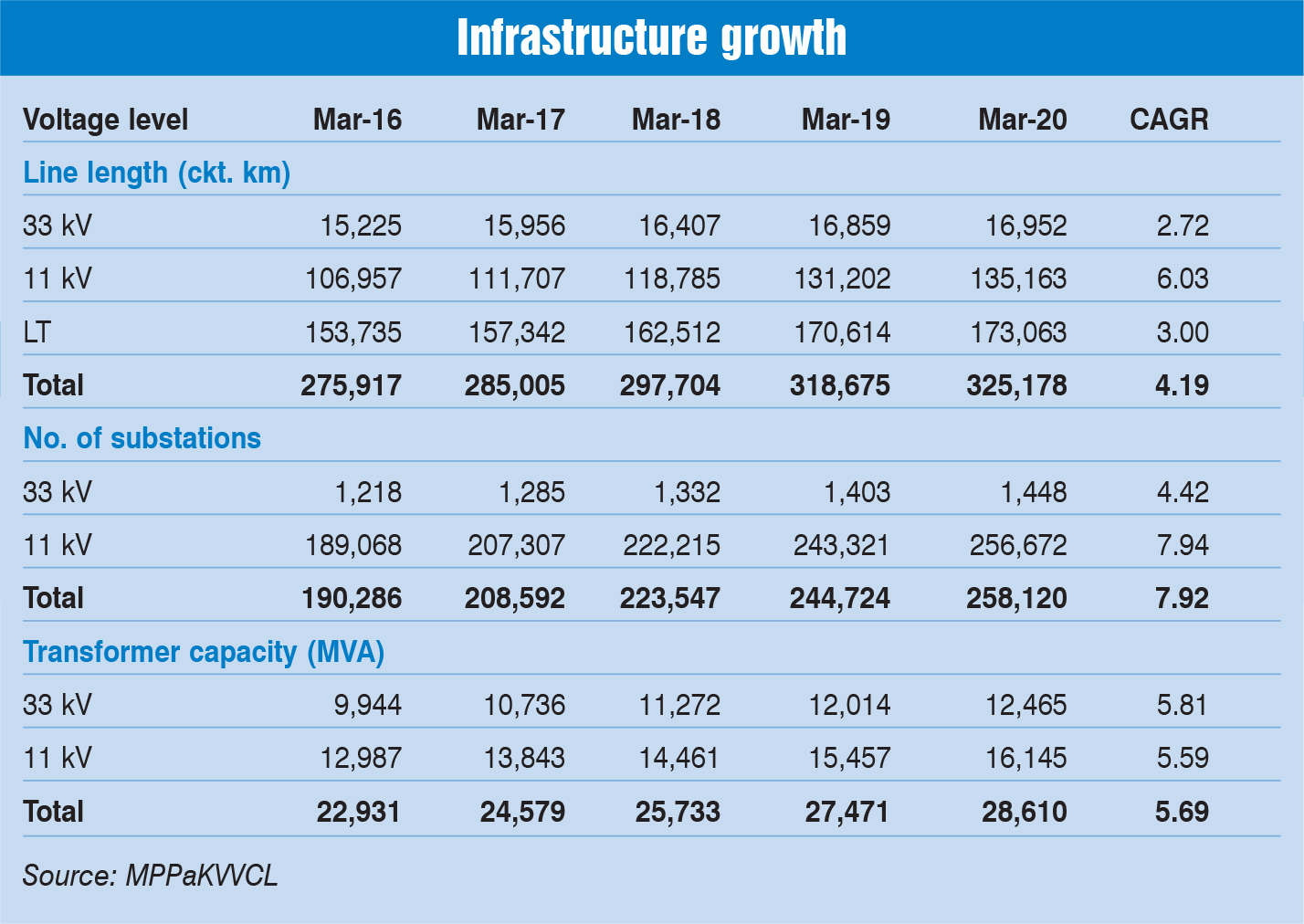 The discom booked a subsidy of Rs 70,106 million but received only Rs 56,808 million. The earnings before interest, taxes, depreciation and amortisation stood at Rs 22,732 million and outstanding debts at Rs 95,651.4 million in 2019-20. The total expenditure stood at Rs 146.8 billion and the power purchase cost contributed to the largest proportion of expenditure at nearly Rs 117 billion or 80 per cent. The discom’s capital expenditure over the five years from 2015-16 to 2019-20 aggregated Rs 42 billion.

One of the biggest challenges for the discom, at present, is the decline in power demand as well as revenues due to local lockdowns imposed to arrest the second wave of Covid. Last year too, the discom had suffered a revenue loss during the national lockdown, affecting its overall financial performance during 2020-21.

Another issue is insufficient metering (0.14 per cent) of agricultural consumers. Currently, these consumers are being charged at a flat rate tariff fixed by the state commission. In addition, asset metering of distribution transformers (DTRs) in rural areas is also incomplete. Besides, the failure of DTRs during the irrigation season and associated meters is also a common occurrence. Though the utility has made efforts towards mitigating these issues, it has not been able achieve the desired results.

The discom has planned a capex of Rs 152 billion for 2020-21 to 2025-26. This will be mostly spent on projects under various schemes such as the state government’s system strengthening scheme, the DDUGJY, the IPDS as well as for expanding the roll-out of smart meters. The future capex will be financed by the state government in the form of equity or grant, as well as loan from key sector lenders such as REC Limited and the Power Finance Corporation.

In terms of network expansion, the company has planned an addition of 7,503 ckt. km distribution lines, 11,780 substations, as well as increasing the transformer capacity by 3,612 MVA by 2025-26.

Under its plans for the smart meter roll-out, the company has reportedly ordered 350,000 smart meters from UK-based firm CyanConnode. These meters will be deployed in Ujjain, Dewas, Ratlam, Mhow and Khargone towns to provide real-time data and reliable 24×7 communication with consumers.

MPPaKVVCL has carved out ambitious capex, capacity addition and technology upgradation plans, which will help meet its goal of becoming more commercially viable and self-sustainable in the coming years, besides supplying reliable power to consumers.