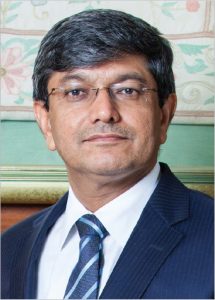 By 2032, NTPC Limited targets to achieve 60 GW of renewable power capacity, which is roughly half of its entire portfolio. Gurdeep Singh, chairman and managing director, NTPC, recently spoke to Alok Brara, publisher, Power Line, on the clean energy transition in the country and the steps needed to achieve this. He also shared his perspective on the role of thermal power plants in the energy transition and discussed NTPC’s plans in the areas of green hydrogen, energy storage, and other emerging technologies. Excerpts from the interview…

What is your perspective on the clean energy transition in the country? What are the steps required and what are the key challenges?

Clean energy transition is inevitable. There has been continuous energy transition from wood to coal to oil to gas to re­newables at present and further to gr­e­en hydrogen. Cleaner and greener en­ergy is essential for sustainability. This should not only be solar or wind energy but also include components of a circular economy such as biomass and waste-to-energy.  Clean energy transition is going to be a reality, and those who are able to take advantage of this will be the winners.

However, it is not going to happen tomorrow. It will not take just one or two years to get there, but two to three decades. Coal and gas will remain relevant for a few decades. The share of re­newables will increase. The prices have come down, which is positive. There is need for a lot of research and deve­lop­ment in the segment, especially in energy storage, which is essential for schedulable and dispatchable power on de­mand. We will have to see how soon we can achieve the transition with grid reliability. A major component of that is how much renewable energy can be absorbed into the grid without integration issues. There are ramp-up and ramp-down requirements, which need to be incentivized. Such a mechanism will help integrate more renewable ca­pa­city into the grid.

As a country, we started taking measures towards lowering carbon emissions by transitioning to supercritical units. We decided to move to supercritical units as they were more efficient. However, if we have to back down these units, it is defeating the purpose. As we go along, we have to start looking at these kinds of issues and also start thinking as to how we can have a blend of renewable energy plus storage plus conventional energy while ensuring that supercritical plants are not backed down to the point below which we lose the advantage of their efficiency and environmental benefits. The coal-based power plants, which were designed to operate as base load plants, are now expected to operate as balancing load plants.

We need to focus on demand-side management. Time-of-Day tariff is an important tool which we need to leverage. Mar­ket instruments can be helpful for energy transition and grid reliability. This is one area in which the energy exchange has done a reasonably good job. How­ever, we have only one predominant exchange. To get the benefits of the market mechanism, other exchanges are required to play a larger role. Also, there is an immediate need for market coupling.

Energy transition is going to be a huge task ahead and will cover a large gamut of activities.  The bottom line should be that people have access to power on demand, and it should be reliable.

The ministry has taken many steps in this direction, and some more may be in the pipeline. The energy transition is not something that is on and off. It is a journey rather than a destination.

What should be the contribution of thermal producers towards the net-zero goal or towar­ds clean energy? What are the things they need to do in order to ensure that the power they produce is cleaner?

Currently, the policy is that renewable energy should not go to waste and there should not be any backing down, which is the right thing to do. But let us look at it differently; if there is solar, wind, and hydro, and each of these is either at the peak or the bottom, what will happen to the grid? Most of the policies till now have been in favor of bringing more and more renewable or fossil-free power. We are incentivizing renewables in several ways. The main backbone of the power supply is still coal-based power. We need to start thinking about how we can incentivize backing down, flexibility and how we can incentivize or give freedom to coal-based plants to minimize their carbon footprint. Coal-based plants, whatever you do, cannot be completely carbon-free. The only measure that you can take is to reduce emissions, which is directly related to running the plant more efficiently.

We should also consider emissions per unit based on the total power supplied to the Discoms and not just the power dispatched because during the day, coal-based plants are required to back down based on the availability of solar and wind power. The Ministry of Power has issued a policy for flexibility in scheduling thermal plants with renewables. As per this policy, thermal power can be replaced with renewable power under the same PPA.

Hon’ble Prime Minister announced India’s ‘Net-Zero” target at COP-26 held in Glasgow. Responsible corporates started considering the plan to reduce their carbon footprint. NTPC was the first energy company globally to declare the UN’s Energy Compact Goals last year, where we committed to install 60 GW of renewable capacity by 2032 and reduce our net energy intensity by 10 per cent versus the 2012 level. This will be achieved mainly through the addition of more and more renewables as well as energy efficiency measures.

Overall energy demand is going to increase in the coming days and our dependence on coal will remain till storage becomes affordable. We cannot swit­ch off or switch on the coal-based power plants very fast, but at some point, we need to start thinking about the two-shift operation of some of the units.

NTPC has been playing a leading role in these areas. We have made all our units flexible up to the minimum load of 55 per cent. All other utilities should also implement a uniform technical minimum condition of 55 per cent of capa­city irrespective of the ownership and we will have to see how we can achieve further load reduction. To achieve this, required incentives need to be provided so that everyone participates.

What has been your experience in FGD?

FGD work is going on at almost all our units. We have ordered FGD for over 60 GW of capacity. As of now, we have commissioned FGD at 2,830 MW and many others are on the verge of commissioning. With the recent extension in the timeline, we would be able to complete it on time. We have planned FGD implementation in most of the units except for a few 110 MW units which are going to be de-commissioned. We have actually de­commissioned nearly 2 GW of coal-ba­sed capacity. These are mainly acqui­red from the state governments. At most of our TPPs, we are also working on NOx emissions reduction.

Another important area is Renovation and Modernization (R&M). We should not be in a hurry to decommission plants. I believe that any unit of 200 MW and above should not be de-commissioned unless it is in such a bad condition that it cannot be revived. Last year, NTPC’s Singrauli Unit, which was commissioned in the year 1982 and is over 40 years old, recorded a PLF of 100 per cent. There are some units of the state gencos that are not doing well and are being considered for retirement. I don’t think this is a good option. These units should be considered for R&M, which will cost only 20-25 per cent of the setting up of a new plant. It will also take one-fourth of the time. These units can be made flexib­le, efficient, and more environment fri­en­dly. R&M is one area that has not gained traction because of the supply overhang in the last few years. At present, the Ministry of Power is considering this subject and there should be some policy soon in this direction.

What is NTPC’s vision for renewable energy for the next 10 or 20 years?

By 2032, we aim to have 60 GW of renewable capacity, which could be as large as thermal capacity.

Let me also state that we have embarked on a robust energy transition journey at NTPC, which is probably the largest such exercise among the corporates.

Will this be primarily solar?

This will have a large component of solar, but we will also have hydro and wind components. One thing that we must discuss is that we have been front runners in using biomass in our boilers. We tested our boilers and carried out experiments and worked on the minor modifications that were needed. But we are not able to get enough supply of biomass. We are also working on Green Hydrogen.

NTPC was the first company to look at green hydrogen. What has been the progress?

It is important to understand that clean energy transition is not just for the power sector. Transition has to happen across all sectors including the most energy-in­tensive ones like Fertilizer, Refining, Ste­el, Aviation, Marine, etc., that is where the potential of Green Hydrogen needs to be leveraged.

We have been doing a lot of studies and preparatory work and are carrying out three pilot projects. One of these is in Ladakh where solar energy will be used to produce hydrogen, which will be used to run hydrogen-powered buses. The second project involves injecting Green Hydrogen into the piped natural gas (PNG) pipelines at NTPC Kawas in Guja­rat. The third one is of capturing CO2 and combining it with green hydrogen to produce green methanol.

The work at the largest renewable energy park (4,750 MW) at Khavada in Gujarat has started. We may use some of that energy to produce Green Hydrogen or green ammonia, which will be supplied to the fertilizer sector or refineries. This can also be exported. So, we are working seriously in those areas, but the constraint as of now is the absence of en­ou­gh electrolyzer manufacturing capacity. We are discussing with many companies to overcome this bottleneck.

You mentioned hydropower earlier. What kind of projects are you looking at?

In the hydropower segment, we have acquired two companies – NEEPCO and THDC – and both are predominantly in hydro. There is a pumped storage hydro project that THDC is likely to commission within the next year or so. We are also working on the feasibility of other pumped hydro storage projects.

What are the economics of pumped hydro storage versus other storage options? Is it becoming more viable?

No definitive figures are available as of now. Economics is site-specific and de­pends on the level of civil construction work required. In the next one or two years, some new projects are likely to be commissioned. After that, we will have greater clarity. As of now, some agencies are claiming that this could be well within Rs 4 per unit, which is quite competitive. The best part is that pumped storage does not depend much on special raw materials and resources, unlike battery solutions. This is a clean source of energy aligned with the Make-in-India programme and this will ensure job creation as well as energy security. It also does not have disposal and waste management problems. However, this cannot be the only source of energy storage. The­re is a need and space for all techno­logies – hydrogen or battery.

NTPC has signed an MoU to develop a gravity-based energy storage solution – which is neither battery nor water. When there is excess energy, it will lift 30-tonne blocks and these blocks will be lowered to harness the energy when required. We are looking forward to this technology. Another energy storage technology that needs greater attention is thermal storage where phase change materials are us­ed for storing energy.