The Bombay Stock Exchange (BSE) Power Index tracks the price movement of 11 power companies operating across various segments of the industry. The index is weighted by free float capitalisation and as of August 30, 2022, stood at 5,227.96 points, registering a growth of over 75 per cent compared to September 1, 2021. During the same period in 2020-21, the BSE Power Index recorded a growth of over 68 per cent despite Covid-19, exemplifying the robust performance of the companies on the index. Power Line presents a round-up of the stock movement of the BSE Power Index companies…

NHPC Limited, the country’s largest hydropower producer with an installed capacity of 7.01 GW, witnessed an increase of 40 per cent in its share price during the review period. Its consolidated income stood at Rs 101.52 billion in 2021-22 as compared to Rs 107.1 billion in 2020-21, recording a decline of 5.21 per cent. It registered a 42 per cent increase in profit after tax (PAT), which went up from Rs 34.87 billion in 2020-21 to Rs 49.84 billion in 2021-22. As of March 2022, NHPC’s total installed capacity stood at 7,071 MW. The company’s power plants had an aggregate plant availability factor of 88.19 per cent, 4 per cent higher than the previous year. Additionally, NHPC Limited is executing eight hydropower and five solar power projects with a combined capacity of 8,579 MW. The company undertook a capex of Rs 51.66 billion in 2021-22 and recorded a growth of 44.8 per cent compared to the previous year.

Private power major Tata Power experienced an increase of 77.59 per cent in its share price during the period under review. Tata Power’s consolidated income in 2021-22 stood at Rs 437.35 billion against Rs 331.42 billion in 2020-21, a growth of 31.96 per cent. Meanwhile, its net profit stood at Rs 21.55 billion in 2021-22 as against Rs 14.38 billion in 2020-21, recording a growth of 49.86 per cent. Currently, it has an installed capacity of 13,315 MW, comprising renewable capacity of 4,655 MW, a transmission line network of 3,552 ckt. km and its distribution arm serves around 12.3 million consumers. It has a solar module and solar cell manufacturing facility of approximately 1 GW. Moreover, the company has developed EV charging capacity throughout India at around 2,200 points, and around 1,400 EV charging stations are under construction. Tata Power’s total capex in financial year 2021-22 stood at Rs 72.68 billion. The company plans to invest over Rs 1 trillion (80 per cent of its capex) towards green businesses.

Adani Power’s stock price recorded a growth of 298.45 per cent compared to the previous year. The company’s revenues stood at Rs 316.86 billion in the period under review, recording a growth of 22.57 per cent. Its net profit for the review period was Rs 49.55 billion as compared to Rs 12.39 billion in the previous year. Adani Power’s total installed capacity (operational) stood at 13,650 MW as of March 2022. The aggregate PLF of the company’s projects stood at 51.5 per cent in 2021-22 declining from 58.9 per cent in 2020-21. Adani Power had around 3.2 GW of capacity under construction as of March 2022. It is expected to commence supply of power to Bangladesh from the 1,600 MW Godda project in Jharkhand from December 2022 onwards. Adani Power recently acquired DB Power for an enterprise value of Rs 70 billion. This acquisition will provide it access to around 3,170 MW of thermal power-based installed capacity. 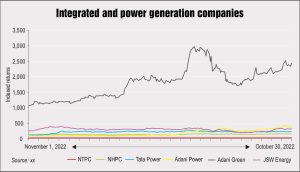 The share price of Adani Green Energy Limited (AGEL) had grown by 125 per cent as of August 31, 2022, compared to the same period in the previous year. Its total revenue was Rs 54.48 billion with a PAT of 4.88 billion during the review period, recording a growth of 35.59 per cent and 168 per cent respectively. The company had an installed capacity of 5.4 GW including 1.7 GW of capacity from SB Energy. AGEL’s total portfolio (including projects under construction) currently stands at 20,434 MW. Its solar and wind capacity utilisation stood at 23.8 per cent and 30.8 per cent respectively in financial year 2021-22. AGEL recently commissioned India’s first hybrid energy plant with a capacity of 390 MW in Rajasthan. The plant houses both solar and wind renewable energy infrastructure within the same location. Furthermore, the company plans to make substantial investments in manufacturing solar panels; this will help it in procuring equipment at lower prices and bidding more competitively for solar projects.

JSW Energy’s share price witnessed a growth of 33.73 per cent in the period under review. The company’s total revenue increased by 22 per cent to Rs 87.36 billion while its PAT increased to Rs 17.43 billion, growing by 117 per cent. The company currently has a portfolio of 7 GW with an installed capacity of 4.8 GW and 2.25 GW under construction. It has 2.64 GW of renewable energy capacity, of which 225 MW is operational and 2.4 GW is under construction. JSW Energy’s thermal power capacity had a PLF of 60 per cent in financial year 2021-22, up by 3 per cent compared to the previous year. The company intends to focus more on renewable energy over time. Around 85 per cent of its capacity is tied up under long-term power purchasing agreements (PPAs) with fixed tariffs, ensuring stable revenue streams.

Private major ATL showed a significant increase of 139 per cent in its share price during the review period of September 1, 2021 to August 31, 2022. The company’s consolidated income stood at Rs 118.61 billion in 2021-22 compared to Rs 104.58 billion in 2020-21, showing a 13.42 per cent increase. Its PAT stood at Rs 12.35 billion, down by 4 per cent from Rs 12.89 billion in the previous year. ATL’s capex stood at Rs 41.9 billion, recording a growth of 6 per cent compared to the previous year, when it was Rs 39.52 billion. It had a transmission network of 18,795 ckt. km and 20,765 MVA after it operationalised 1,104 ckt. km of capacity in financial year 2021-22. Its transmission network had a system availability of 99.7 per cent. Its distribution business (AEML), catering to around 3 million consumers in Mumbai, achieved reasonably acceptable distribution losses equal to 6.55 per cent during the previous fiscal. 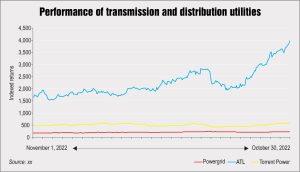 Torrent Power also witnessed a growth of 19.21 per cent in its stock price. Its consolidated income stood at Rs 144.92 billion in 2021-22 compared to Rs 123.14 billion in 2020-21, having registered a growth of 17.7 per cent. The company recorded a 64.63 per cent decrease in its PAT as it declined from Rs 12.96 billion in 2020-21 to Rs 4.58 billion in 2021-22. Torrent Power currently has an installed operational capacity of 4,110 MW which is a mix of thermal and renewable energy projects. On the distribution side, it serves around 4 million customers with 99 per cent reliability and has registered a very low T&D distribution loss of 3.93 per cent. It has a distribution licence for operating in Ahmedabad, Surat, the Dahej SEZ and Dholera. Additionally, it has distribution franchises in Agra, Bhiwandi, Shil, Mumbra and Kalwa. In 2021-22, it also acquired a 51 per cent stake in the licensed distribution arm of Dadra Nagar Haveli and Daman & Diu. 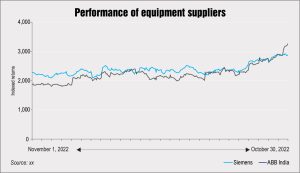 The Indian economy and the power sector demonstrated strong growth owing to recovery from the first and second waves of Covid-19; this allowed the utilities to commission projects and accrue more revenue. Now the sector is rapidly moving to make substantial investments in renewable energy, IoT, private discoms, etc. Nonetheless, the sector’s financial health is expected to improve in the medium term driven by recently announced reforms such as the electricity amendment bill, open access reforms, the mandatory enforcement of a payment security mechanism under PPAs, and the privatisation of UTs.