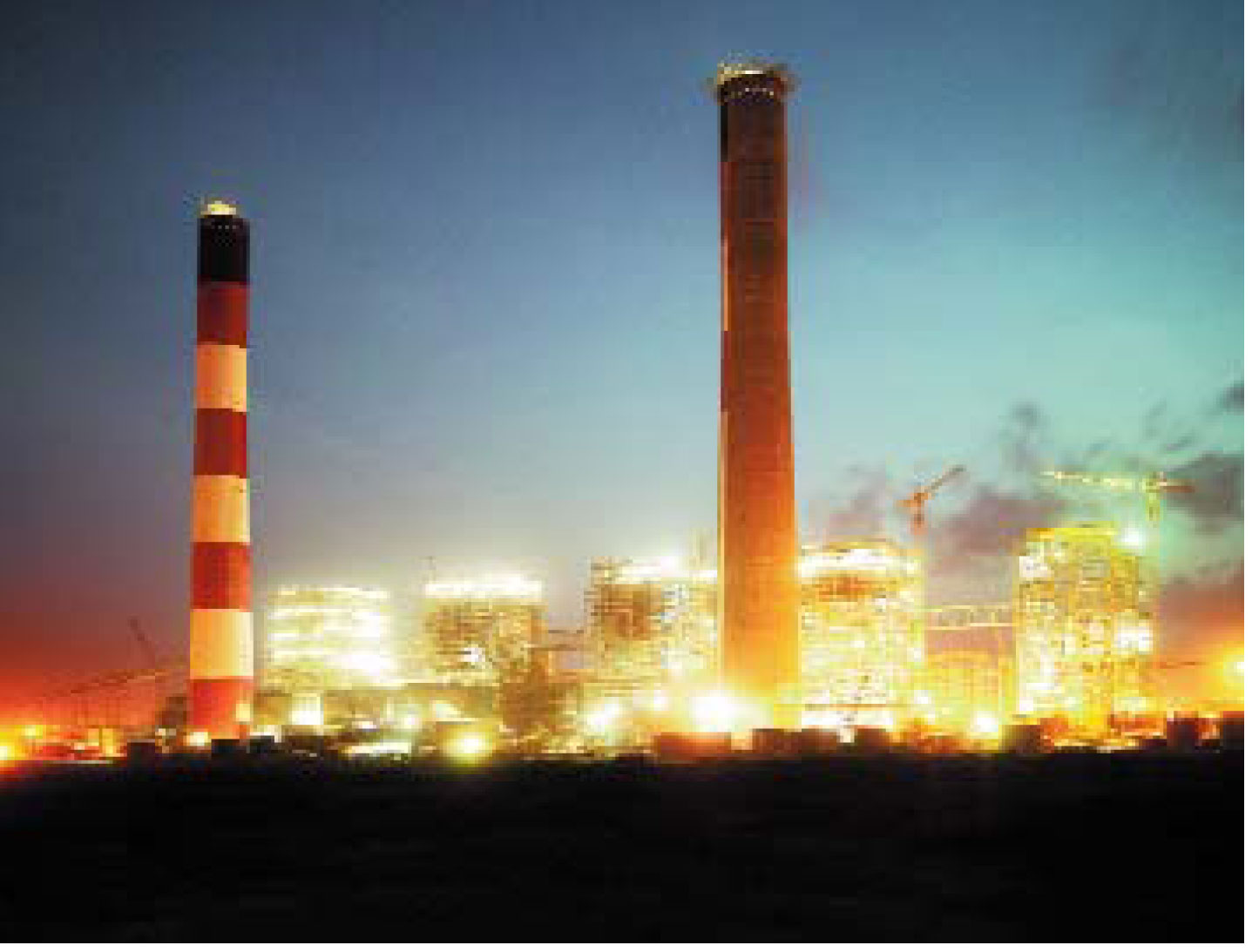 The 4,000 MW Mundra ultra mega power project in Gujarat set new milestones in the sector. It was the first UMPP to be awarded by the government and the first project to install 800 MW supercritical units. It was also completed in a record time of one year from the date of commissioning of the first unit in March 2012. This article from our archives talked about the innovative practices followed by Tata Power in this landmark project…

The 4,000 MW Mundra ultra mega power project (UMPP) is set to create new benchmarks in the power sector. With progress much ahead of schedule, the project is close to commissioning its first unit.

The Mundra UMPP, which would be the largest coal-fired greenfield plant in the world once complete, is being set up by Tata Power Company, India’s largest private sector power company, through its wholly owned subsidiary Coastal Gujarat Power Limited (CGPL). The project is being developed across an area of 3,224.6 acres covering three villages – Tunda and MotaKandagara in Mundra taluka, and Nana Bhadiya in Mandvi taluka – near Mundra port in Kutch district of Gujarat.

The project has been making brisk progress with a field force of 11,500 working full steam ahead. The first 800 MW unit was almost ready for commissioning in June this year, but was held back due to a delay in the construction of transmission lines. Power Grid Corporation of India Limited (Powergrid), which is constructing these lines, is confident about setting up the evacuation system by September 15, 2011, the time-frame agreed to by the two parties.

The Mundra UMPP has many firsts to its credit. It was the first to be awarded under the UMPP policy. It is India’s first project to install 800 MW supercritical units. It is expected to be the most energy efficient coal-based thermal power plant in the country. It is also the recipient of the largest individual single-project assistance offered by the Inter­national Finance Corporation (IFC), the Korea EXIM Bank and the Asian Development Bank (ADB).

Being a first-of-its-kind project, the UMPP has necessitated the use of several new concepts and solutions in project management, human resources (HR) and execution. In an exclusive interaction with Power Line, the project team talked at length about the challenges faced by the company in implementation and the strategies adopted to overcome them….

Initially, the project was managed by a steering committee consisting of senior Tata Power executives who were instrumental in winning the bid. The first set of employees, including the chief executive officer and the chief financial officer for the project, were appointed in June 2007. Following this, departments and processes such as administration, HR, procurement, accounting, funds management, planning, safety and construction management were put in place. “The need of the hour was to put together a team that would hit the ground running,” says Alok Kanagat, executive director, CGPL. Today, CGPL has 500 employees drawn from diverse companies. To integrate the team, structured interventions such as induction programmes, senior executive team-building programmes and offsite meetings were held.

Capability building measures were taken to create a skilled manpower base. Dupont was brought in to help CGPL formulate and implement safety pro­cesses and strategies. In early 2009, an international benchmarking consultant was contracted for process benchmarking. Another strategy that paid rich dividends was the appointment of an operation and maintenance (O&M) team during construction to facilitate a smooth handover. Currently, a customised project management information system is under development, which will integrate all project building activities into a single application. 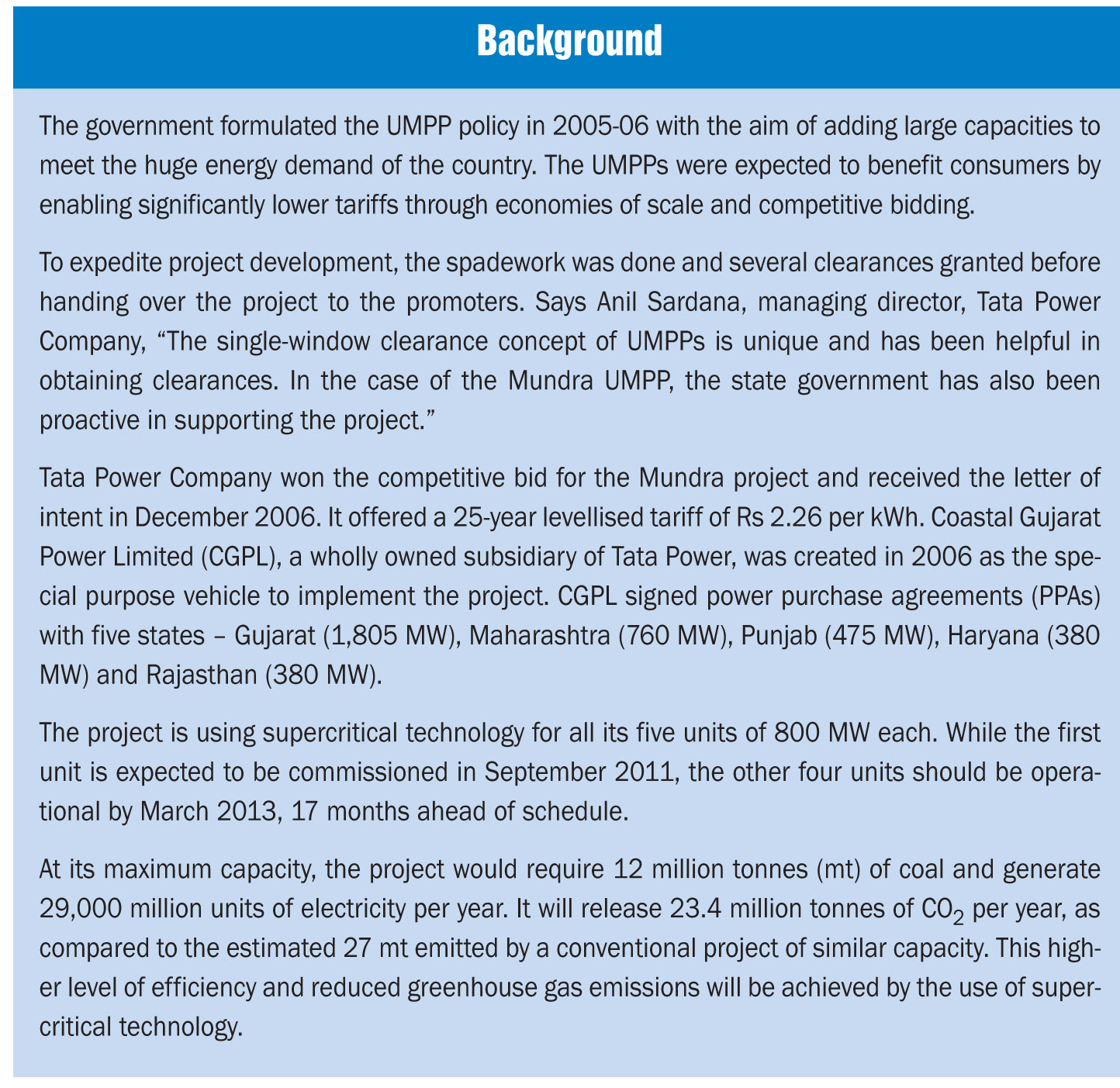 CGPL faced several challenges in obtaining clearances, especially excise and customs duty exemption. “The initial impression at the time of bidding was that UMPPs would get excise exemption. However, it soon became clear that the way the customs and excise notifications had been interpreted, the project was not eligible for exemption,” says Kanagat. Finally, a new notification was released that provided clarity on the issue. Another challenge was obtaining forest clearance. It took nearly two years to secure final approval for the 321.2 acres of forest land required for the project.

Financial closure for the project was achieved in April 2008. CGPL won Project Finance International’s Deal of the Year Award for Asia Pacific in 2009 as well as the Euromoney Deal of the Year Award for the fund raising. “Given the volatile nature of global coal and shipping industries, it is indeed creditable that more than 50 per cent of the project’s debt is based on foreign currency,” says Kanagat. Despite the project still being under construction, CGPL has been awarded a credit rating of A+/Positive by CRISIL. 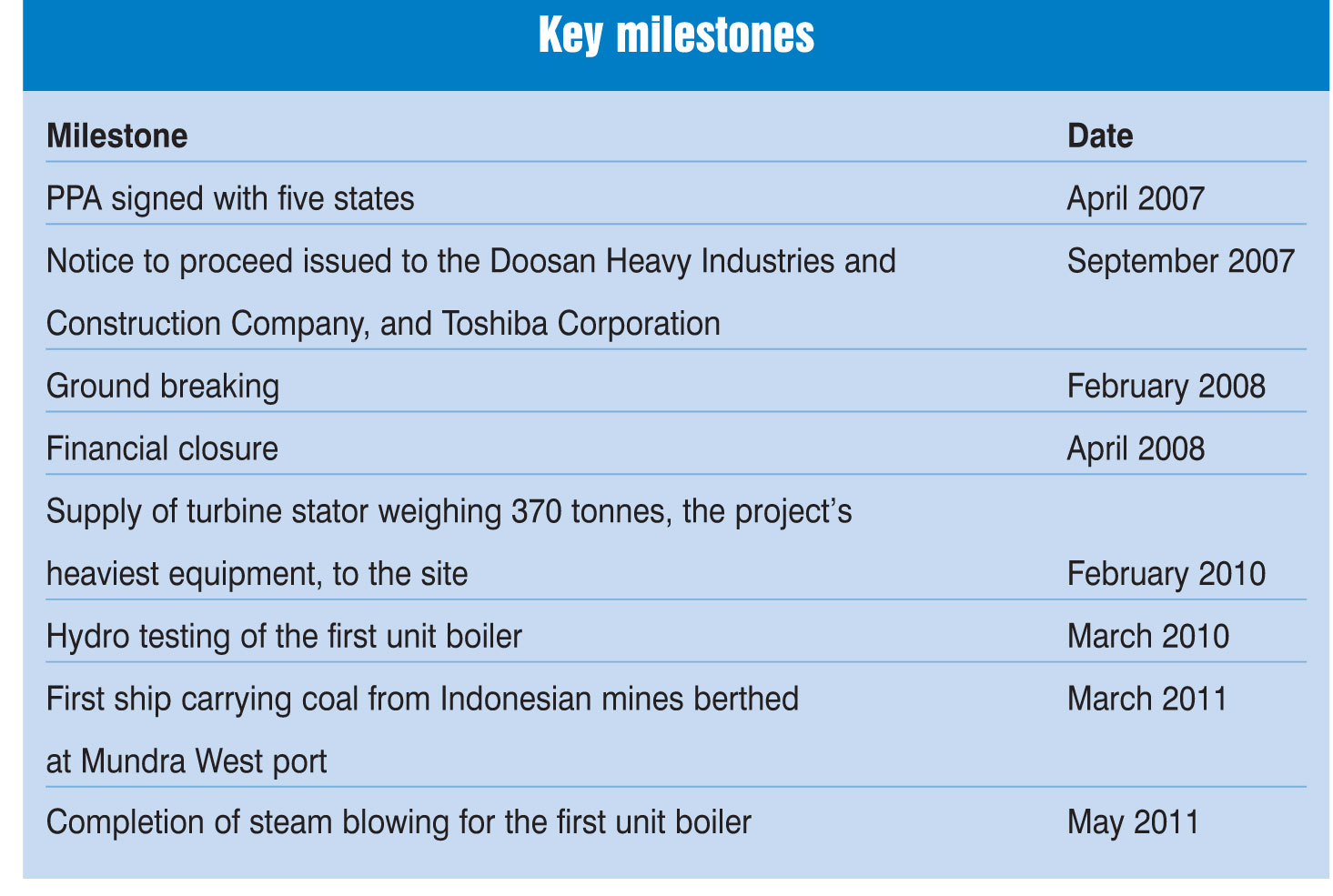 There is no single engineering, procurement and construction (EPC) contractor for the project. Instead, the team has adopted a multi-packaging model. In May 2007, Tata Power awarded the contract for the complete boiler island along with civil works to South Korea-based Doosan Heavy Industries and Cons­truction Company. In August 2007, Tata Power placed the order for supply of turbine generators and auxiliaries with Japan-based Toshiba Corporation. Orders for balance of plant equipment were placed separately.

The project is based on imported coal and would require 12 million tonnes per annum (mtpa) of coal. Tata Power has tied up this requirement from two Indonesian coal mines, Bumi Resources-PT Kaltim Prima Coal and PT Arutmin, by acquiring a 30 per cent stake in each of them. The $1.2 billion deal includes coal offtake agreements that allow Tata Power to purchase 12 mtpa of coal from 2011 and a 30 per cent stake in Bumi’s trading company.

Since the project was won through a competitive bidding process, it is essential to meet the budgeted costs. Any time overruns could translate into additional costs. Several strategies have been adopted to avoid this. Cross-functional teams have been appointed to monitor project costs and physical progress. Also, to realise logistical efficiencies of coal transport, a mix of owned and long-term charter capesize vessels is being used. “Using owned ships provides cost clarity over a long-term PPA and safeguards against volatility in shipping cycles,” says Sardana.

Transmission infrastructure development for the project is being undertaken by Powergrid. There has been some uncertainty over whether construction of the transmission infrastructure would keep pace with the generation project. How­ever, S.K. Chatur­vedi, chairman and managing director of Powergrid, assures that there are no delays. “Powergrid was working on two alternative routes, a temporary one and a permanent one. The development of the latter was time consuming and, therefore, we offered to develop the temporary route. Now, there is progress on the permanent route as well. For the first unit, completion of one of these routes is enough,” he says. As per the Central Electricity Authority’s status report, three lines – Mundra-Bachhau-Ranchodpura (MBR), Mundra-Limbdi and Mundra-Jetpur – were to be constructed for power evacuation from the project. The MBR line was scheduled to be completed in January 2011, but is now likely to be delayed due to right-of-way and forest clearance-related issues. The transmission link passes through the Wild Ass Sanctuary in Kutch district. Contingency arrangements are being made using part of the Mundra-Limbdi line and Gujarat Energy Transmission Corporation Limi­ted’s network at the Bachau substation. 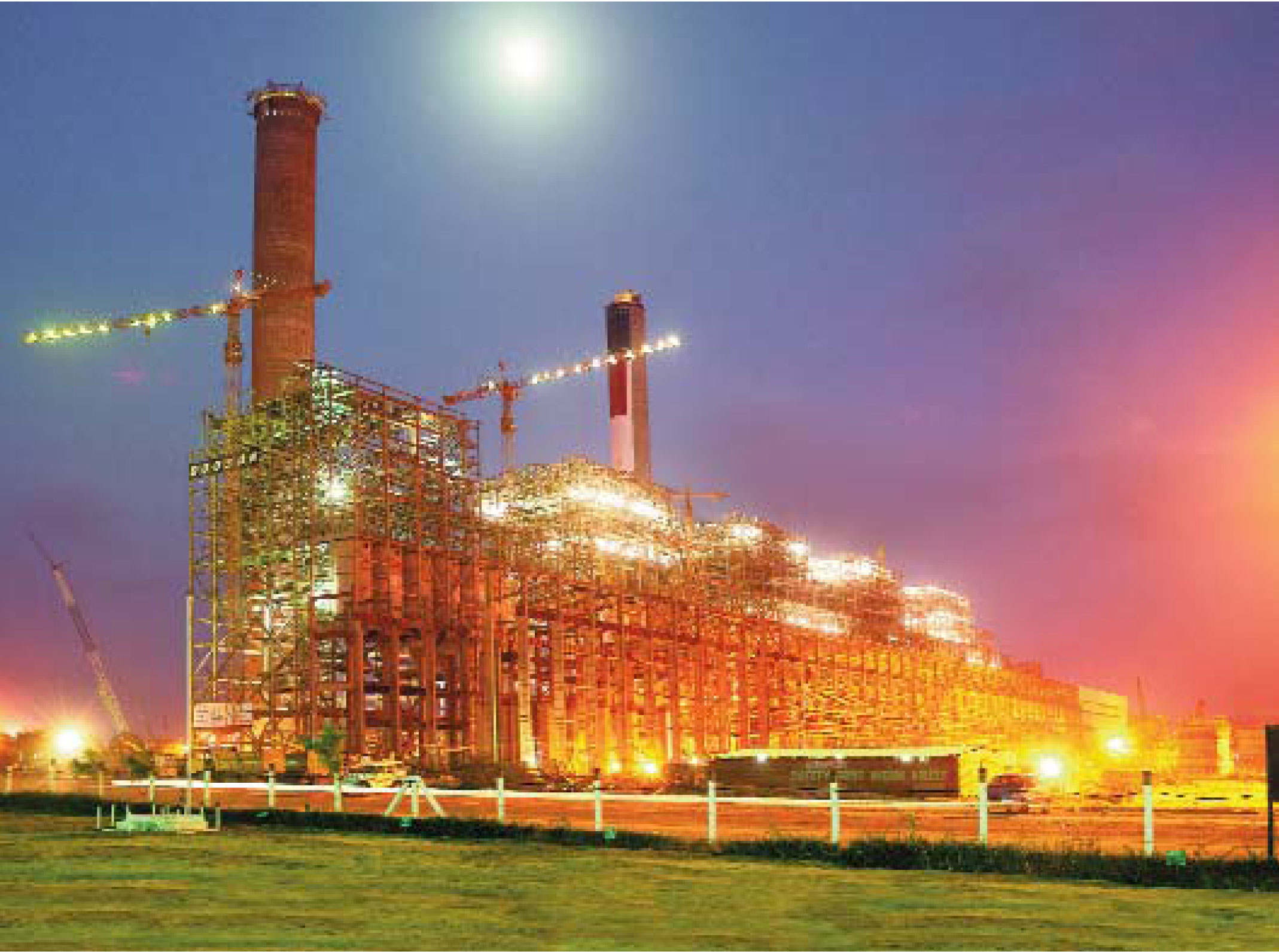 Along with successful project execution, the company has paid attention to soft initiatives such as worker safety and corporate social responsibility. These initiatives help in integration and involvement of the local population with the project. Some of these are as follows:

Worker safety: For ensuring worker safety, CGPL has contracted Dupont to provide safety systems and has increased the supervisor-to-workmen ratio. To discourage unsafe work practices, financial rewards and penalties have been announced for contractors.

Corporate social responsibility: The project has not resulted in any physical displacement or resettlement. However, it has had a direct impact on the livelihood of several households that are dependent on cattle rearing. CGPL has been adopting strategies to help the affected population. These interventions have been in the areas of health, education, income generation, livelihood restoration, infrastructure development, energy conservation and natural re­source management.

The company has compensated private landowners from whom land was acquired. To compensate for the reduction in grazing land, CGPL has developed a facility to provide fodder for cattle. It has also helped increase the productivity of non-project land in affected areas. Besides, the company has implemented skill development training programmes for affected households, thereby equipping them for alternative sources of livelihood.

The grazing land mitigation plan and the interim fodder supply programme have become benchmarks for the state. “We understand that this mitigation method has become a norm for each and every upcoming industry in this region requiring grazing land. Besides, we never faced any agitation,” says Kanagat. As the next step, a transition from mitigation measures to income generation and livelihood restoration was needed. Initiatives such as organic farming and vermiculture are some of the options being considered with support from partner agencies.

Green initiatives: The green initiatives  taken in and around the plant include landscaping the project and colony area, coastline protection through mangrove plantation, water harvesting, waste­­water recycling and soil conservation. Vege­tation screen development is under way along the plant periphery to help in dust control as well as microclimate management. CGPL also plans to set up a 4 MW micro-hydel plant and a wind farm near the project site. The administrative office for the project is being developed as a green building and CGPL is in discussions with cement manufacturers for utilisation of fly ash from the plant.

Though the Mundra UMPP has overcome several challenges, it still has some way to go. Once fully commissioned, the project will not only be a major achievement for Tata Power but will also set new benchmarks in the sector and strengthen India’s position in the global power industry.