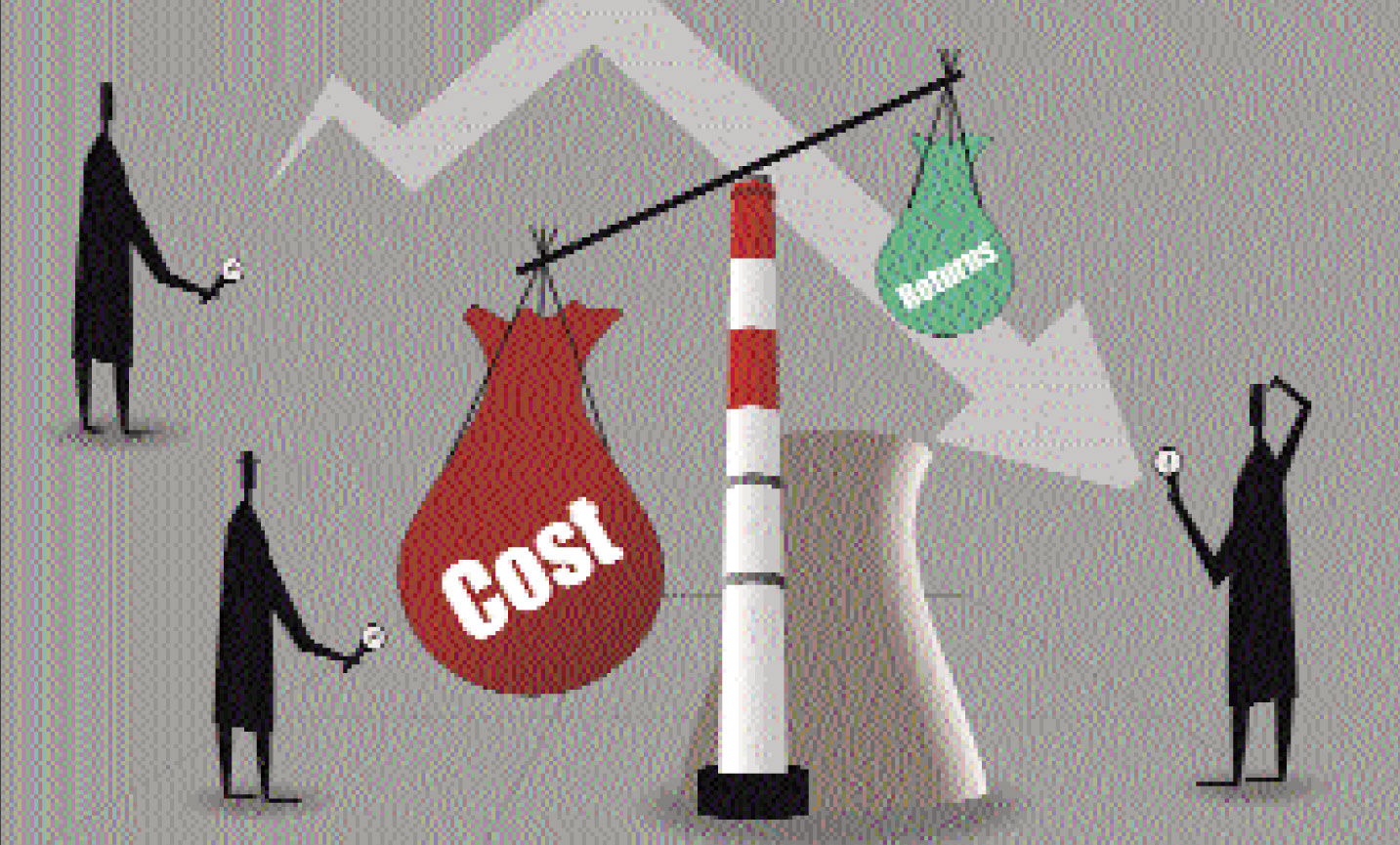 At a time when the country is facing an acute coal shortage, we revisit a story from August 2011, when nearly 40 GW of capacity had been impacted by the coal crisis at the time. Interestingly, the reasons for the shortfall have remained more or less the same – inadequate domestic production and a steep rise in international coal prices. The sector, once again, finds itself in a coal conundrum.

The low price discovery in the competitive bidding process for ultra mega power projects (UMPPs) was a high point for the Indian power sector. The price discovered for the Mundra, Sasan and Krishnapatnam UMPPs was Rs 2.26 per unit, Rs 1.19 per unit and Rs 2.33 per unit respectively. However, today, with the fuel crisis deepening, these upcoming projects may not be able to supply power at these costs. Operational projects like Adani Power’s Mundra plant and JSW Energy’s Ratnagiri facility are already fa­cing the heat and finding it unremunerative to supply power at costs they have committed to.

“A spectre of acute fuel shortage looms large on the power sector. About 40,000 MW of operating and upcoming cap­acity would be impacted,” says Ashok Khurana, director-general, Association of Power Producers, which comprises 17 major power generating companies. Issues related to rising fuel costs and fuel procurement, and delays in securing approvals and environmental clearances have led to steep cost escalations. These projects now run the risk of defaulting on their commitments, unless the contracts are renegotiated.

Imported coal-based projects are the worst-affected segment. Developers are stuck as they cannot pass on the increasing costs to buyers under the existing contracts. “While the government is trying to incorporate the required changes for prospective projects, it would need to establish a suitable mechanism or an institutional framework for operational plants and facilities that are under construction,” says Khurana. APP is demanding that for factors that are foreseeable as well as beyond the control of the developer, the government should change the standard bidding provisions to allow some costs to be passed through.

The projects facing issues related to fuel supply and costs can be categorised as follows:

Projects based on imported coal: Indo­nesia’s new coal pricing regulation has meant an increase in the landed price of fuel. Indonesian coal prices will now have to be benchmarked against a set of international and domestic indices, and by September 2011 all coal contracts would be modified retrospectively. This implies that the long-term contracts, which were based on discounts or flat pricing, will not be honoured. At least 17,000 MW of Indian projects will be directly impacted by this regulation (including Adani Power’s 1,980 MW Tiroda and 2,640 MW Mundra projects; Lanco Infratech’s 507.5 MW Udupi project; Tata Power’s 4,000 MW Mundra UMPP; and JSW Energy’s 300 MW Ratnagiri project). Also, Australia is planning to levy a coal tax and other coal exporting countries may follow suit.

Projects with LoA but inadequate coal supply: Some operational projects have received letters of assurance from Coal India Limited (CIL), but are yet to sign the fuel supply agreement (FSA). CIL has stopped signing FSAs since April 2009. Some of these projects are operating at low plant load factors (PLFs) of 40-50 per cent due to inadequate coal supply from CIL. “CIL is an instrument of the state and should honour its commitment,” says Khurana. Also, these projects are sourcing their additional requirement from the open market (through e-auctions, etc.) at high costs. Lanco’s Amarkantak I and II projects are meeting only 60-65 per cent of their fuel requirement from CIL. Reliance Power’s Rosa plant, a cost-plus project, is sourcing only 50-60 per cent of its demand from CIL. Other impacted projects are NTPC’s Farakka and Kahalgaon facilities, KSK’s Wardha plant and Lanco Infratech’s Anpara project. 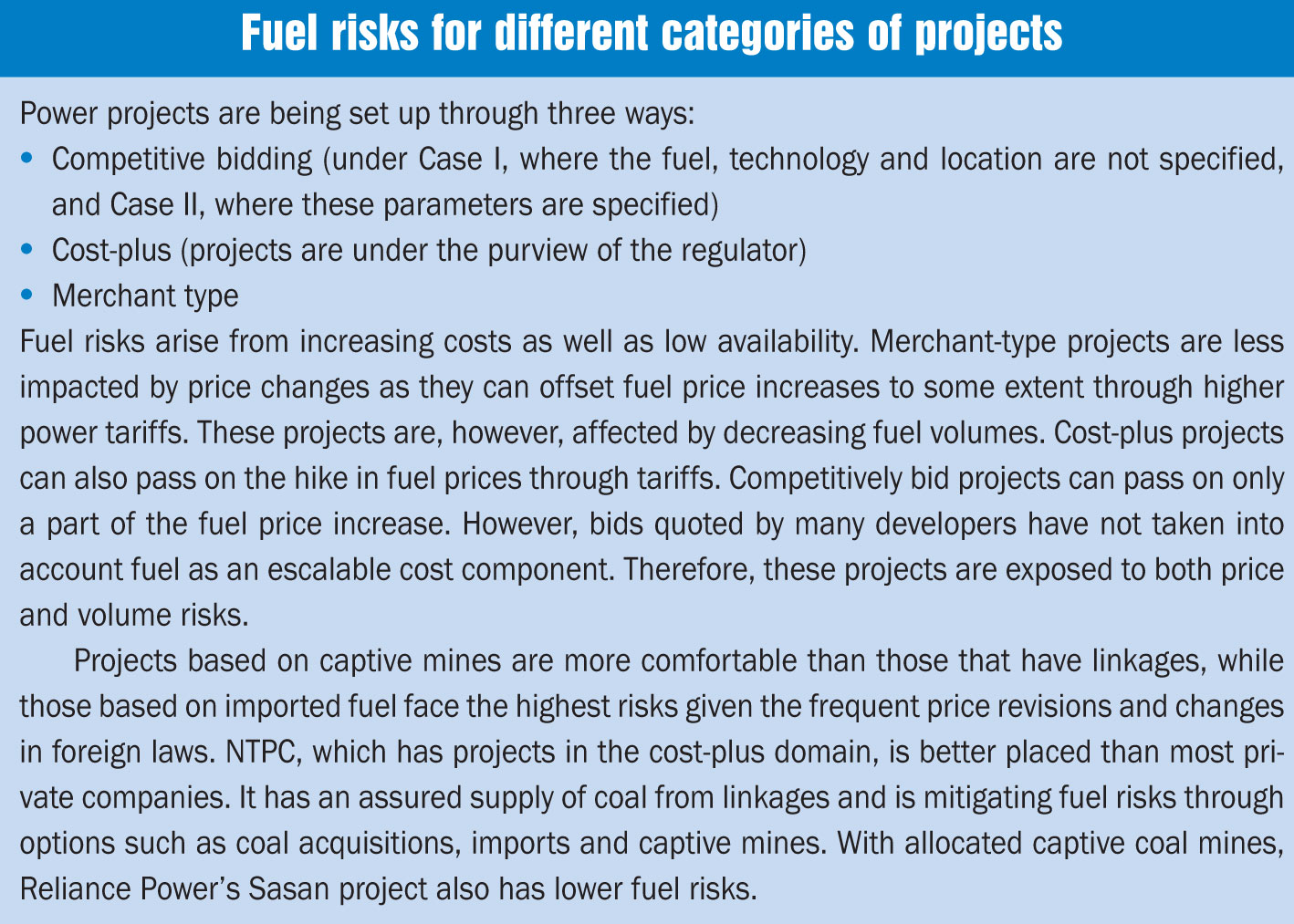 Projects with coal blocks in no-go areas: The go/no-go issue has affected another set of coal-based projects. Some coal mines in no-go areas are being released by the Ministry of Environment and Forests on a case-to-case basis. Six coal mines were cleared recently, thereby providing a lifeline to the Bedabahal UMPP, the Orissa Power Generation Corpo­ration’s 1,320 MW plant and NTPC’s 1,600 MW Dulanga project. Earlier, coal mines associated with the 2×660 MW IFFCO Chhattisgarh project were also released. However, several advanced projects are still stranded due to this issue. The standard bid document preparation process in 2006 did not consider this problem.

Many bids have a low proportion of escalable tariffs, thereby exposing developers to fuel price-related risks. Besides, inadequate fuel supply leads to low PLFs and, therefore, results in under-recovery of fixed costs as well as incentives.

In this situation, the power ministry is under pressure to act and keep investors interested in the sector. It is reviewing the competitive bidding guidelines for both Case I and Case II projects, and planning to make such fuel escalations force majeure and, therefore, a pass through. In July 2011, it undertook a consultation process involving the private sector to make changes in the bidding documents for Case II projects. “We are still compiling the changes,” says I.C.P. Keshari, joint secretary, Ministry of Power. For Case I projects, a special committee under the secretary has been constituted. However, private companies feel that the ministry’s interventions may not be enough as it may not incorporate all the required changes. They also believe that while the ministry may take a view for projects prospectively, upcoming/operational projects may not get adequate relief.

A recent order by the Maharashtra Electricity Regulatory Commission (MERC) is being seen as a landmark step towards an accommodating stance. The MERC has allowed Maharashtra State Electricity Distribution Company Limited (MSEDCL) to deviate from the standard bidding document for the procurement of 600 MW of baseload power on a long-term basis through tariff-based competitive bidding. It has directed that in case the development of the allocated Bhiv­kund captive coal mine does not progress due to reasons beyond the control of the developer, it can resort to market purchases to produce the contracted power and pass the increased fuel cost to MSEDCL for procuring additional coal from another source to meet the fuel shortfall.

The competitive bidding guidelines were incorporated in 2006 when domestic coal was freely available and international coal prices were affordable. “Fuel shortages in the domestic market are leading to a heavy dependence on imports. Unfortunately, the UMPP bid and other documents do not appear to take into account the fact that for these imports, Indian generators are dependent on the fuel supplier, which supply through contracts that are governed by foreign laws. The risk of change in the law governing supply and the terms of supply including price variations have been totally ignored. When fuel constitutes 60-80 per cent of the cost of generation, no gener­ator can sustain a 25-year supply commitment if the law restricts supply or increases prices dramatically,” says Amit Kapur, partner, Jyoti Sagar Associates.

There is no mechanism under the Electricity Act, 2003 under which generators can request for a tariff review. Regulators cannot provide relief as they do not have the authority to review tariffs in such cases. “The regulators have their hands tied. Under Section 63 of the act, they are required to adopt the tariff determined through a transparent bidding process. This weakens the case for regulators to act proactively on such matters and decide on merits. The alternative of moving court involves protracted litigation, during which the assets remain non-performing. The impact of this can cascade to the financial sector with serious consequences,” points out Khurana. He says that an expert committee should be established for setting benchmarks and resolving these issues.

While the power ministry has undertaken a review of its tariff bidding guidelines, it has no plans as yet to move a proposal to amend the Electricity Act and empower regulators to revise power supply agreements.

V.P. Raja, chairman, MERC, believes that blanket changes are not required. “Some companies have undertaken proper due diligence and incorporated a mechanism for a sufficient pass-through of variable costs in their contracts. Changes are required on a case-to-case basis depending on the merit of each. The sanctity of the contract has to be maintained and we cannot play around with it,” he says.  He feels that Case I bidding should be made more fuel specific, and separate bids should be invited for gas-, imported coal- and domestic coal-based projects, as domestic coal-based bids will always be the lowest (L1).

Khurana agrees that a case-to-case perspective is needed to estimate the required pass-through so that the developer does not make unlawful gains.

“The benchmarks must evaluate reasonable returns that are not one-sided and windfall. This should be done on the basis of a predetermined threshold of material change (both positive and negative) so that both windfall and one-sided changes are dealt with in the larger interest of the economy. This could be introduced through the exit, renegotiation and force majeure provisions,” says Kapur.

Going forward, power generators will continue to face fuel risks. CIL’s production has not kept pace with the increase in capacity or the rate at which it has signed up linkages. Its lack of confidence in supplying fuel is reflected by the quality of FSAs. FSAs signed before April 2009 assured coal supplies for 90 per cent of project’s requirement. However, post- April 2009, CIL has been guaranteeing supplies of only 50-60 per cent. In addition, many developers complain that the FSAs are lopsided and protect CIL from delays and underproduction while setting them stiff milestone-based targets. “While PPAs set tariffs for a 25-year period, the terms under the FSAs can be revised every five years,” says a developer. For imported coal, companies run the risk of price changes every one-two years as well as revision of foreign regulations. 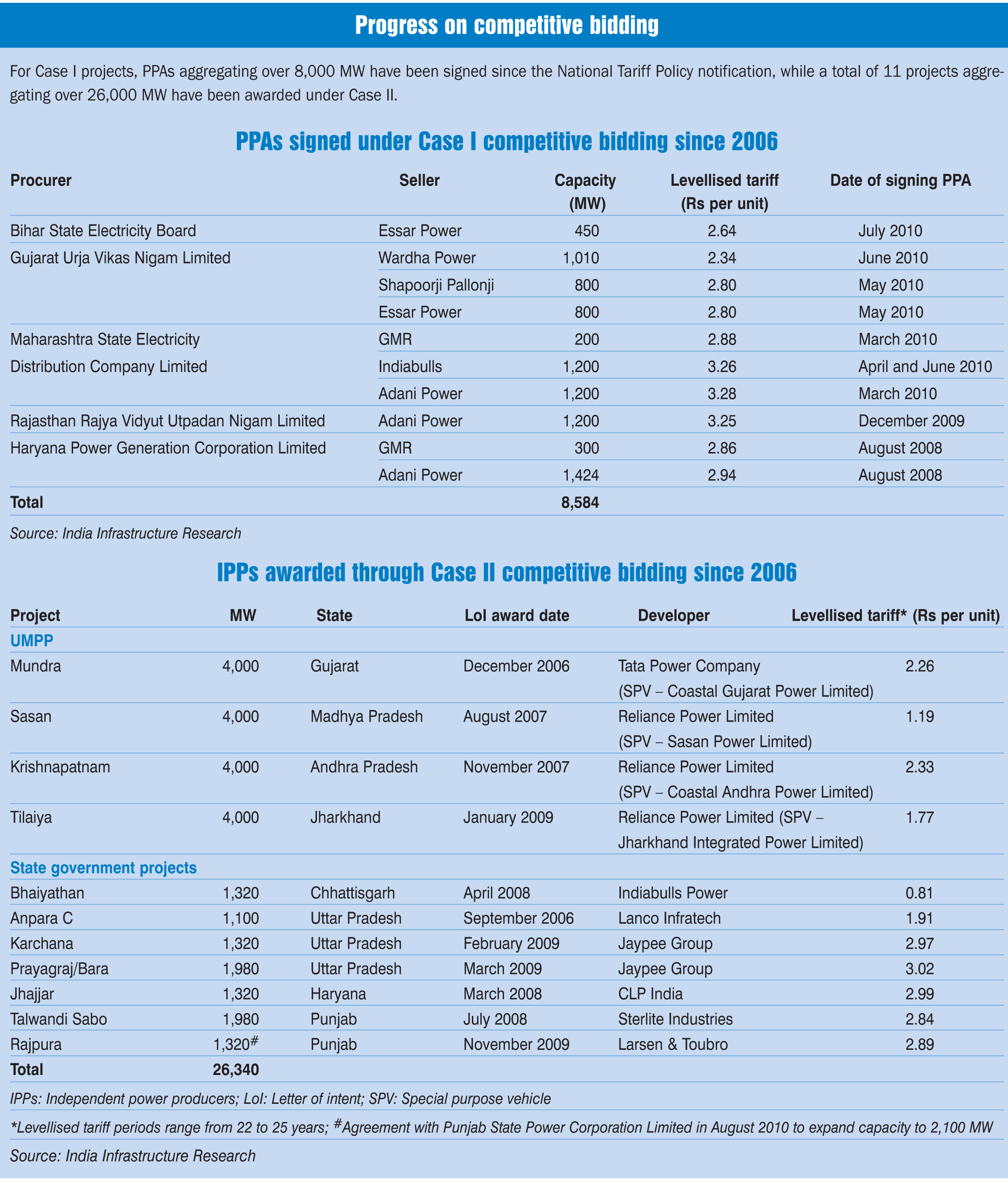 According to Kapur, the Indian power policy and law do not take into account two realities – risks are allocated to those entities that are best placed to manage them and long-term infrastructure projects are bound to face unforeseen issues that can result in dramatic changes. “There must be an evaluation of risks and role allocation with regard to the Indian and international definitions of force majeure, controllable and uncontrollable factors, frustration and supervening impossibility, unforeseen events and lack of mitigation measures,” he says.

In fact, the workability of competitive bidding itself is being questioned as the process forces developers to make assumptions and calculations over several costs (land, water, fuel, equipment, etc.) as well as make room for delays, while binding them to watertight commitments under a 25-year PPA. Un­controllable factors apart, it is possible that in their bid to win contracts, developers may have spread themselves too thin and taken an overoptimistic call on various costs and other factors.

However, experts say that competitive bidding is the way forward. “The system is still sound. All that is required is a little tweaking based on the actual ground experience,” says Raja. Khurana believes that alignment of the power sector with the fuel supply segment could address the issue. “What we need is to make the fuel regime compatible with the power sector regime,” he says.

Limited coal availability and its high prices have worsened the fuel supply scenario for the sector, which has been facing similar issues in operating gas-based projects. In this situation, the government needs to act sensitively and fairly. It needs to undertake a consultation process involving all stakeholders to ensure that investments made in operating and up­coming projects are not wasted. Keeping investors interested in the sector in these difficult times is of utmost importance.