Within just a few years, North Bihar Power Distribution Company Limited (NBPDCL) has made significant progress in improving its operational performance. The utility, which was incorporated in 2012 following the unbundling of the Bihar State Electricity Board (BSEB), reduced its aggregate technical and commercial (AT&C) losses from nearly 59 per cent to 33 per cent in September 2015.

NBPDCL is engaged in electricity distribution in 21 districts of north Bihar: west Champaran, east Champaran, Sitamadhi, Sheohar, Muzaffarpur, Vaishali, Saran, Siwan, Gopalgunj, Mahubani, Darbhanaga, Samastipur, Begusarai, Khagaria, Saharsa, Supaul, Medhepura, Araria, Katihar, Purnea and Kishangunj. In recent years, it has undertaken several initiatives to up its operational and financial performance. It has also introduced private participation by appointing a distribution franchise in Muzaffarpur. Taking into account the Bihar government’s participation in the centre’s 24×7 Power for All scheme, the utility has lined up many measures to improve electricity supply over the coming years. Power Line presents an overview of NBPDCL’s distribution infrastructure, consumer base, loss reduction initiatives, challenges and future plans…

Distribution network and consumer base

NBPDCL’s consumer base and metering coverage has increased steadily over the years. Between 2012-13 and 2014-15, the discom’s consumers effectively increased at a compound annual growth rate (CAGR) of 22.5 per cent. As of September 2015, the number of consumers stood at 3.96 million, with almost 90 per cent belonging to the domestic category (as of 2014-15). In the past three years, NBPDCL’s metered consumers increased at a CAGR of 23.5 per cent, standing at 3.43 million as of September 2015. The discom’s metering coverage increased from nearly 76 per cent in November 2012 to 86.6 per cent in September 2015.

Notably, Muzaffarpur is being supplied electricity through the distribution franchise mode since November 2013, with Essel Utilities being appointed the franchisee for a period of 15 years. As of September 2015, it was serving around 0.25 million consumers in the area.

NBPDCL inherited several challenges after separating from the erstwhile BSEB, with AT&C loss levels of 59 per cent, delays in the release of new connections and the presence of unauthorised and unmetered connections resulting in low collection efficiency. Poor infrastructure like defective meters, the billing of minimum monthly charges due to meter reading issues, and insufficient manpower posed further obstacles.

However, the discom has been recording a steady decline in its AT&C loss levels over the past three years as a result of various improvement measures. The losses declined by 24.08 percentage points to 35.32 per cent in 2014-15, standing at 32.65 per cent as of September 2015.

Its average monthly availability of power also increased from 360 MUs in March 2013 to 700 MUs in September 2015. It has been successfully meeting the peak demand for power in its region over the past three years. During 2012-13 to 2014-15, the peak power demand increased from 500 MW to 1,354 MW in north Bihar. NBPDCL increased its power availability in line with the rising demand from six to eight hours in rural areas to 16 hours, and in urban areas from 12-16 hours to 20-22 hours. It has also released around 2 million new connections since March 2013.

To reduce commercial losses, NBPDCL has introduced incentive schemes to motivate employees involved in revenue collection. It has also started disconnection drives to keep a check on the non-payment of bills, and also introduced monitoring by concerned officials at the district level. Regular revenue review meetings of divisions, the filing and prompt disposal of certificate cases, and employee training have also been taken up.

The company has adopted several best practices, such as time-of-day metering for connections with a minimum load of 1 MW; aerial bunched cables with bearer wires for LT lines in dense areas; and the installation of prepaid meters. It has successfully completed the first phase of remote meter reading for all connections above 20 kW. 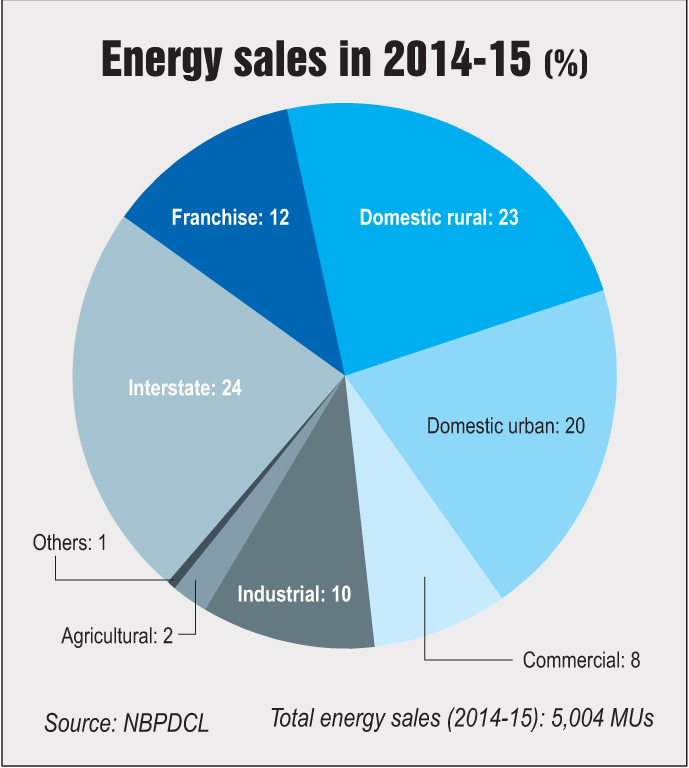 With various initiatives for improving operational efficiency and reducing losses, NBPDCL’s operational and financial performance is gradually starting to pick up. There is wide scope for improvement as the company’s AT&C losses remain high in comparison with other state discoms. In the draft business plan for 2016-17, several measures have been proposed for further improving revenue collection and arresting losses. To motivate consumers to make timely bill payments, it plans to provide a rebate of 1.5 per cent on the billed amount of all LT and HT consumers. To promote online payments, it has proposed a rebate of 1 per cent  in addition to the 1.5 per cent rebate. The construction of new 33/11 kV substations, associated 33 kV lines, interconnecting 33 kV lines and the upgradation of existing substations is also planned. Overall, NBPDCL is aiming to bring down its distribution losses to about 23 per cent by 2018-19. Given its progress so far, it is likely to achieve the target.

With inputs from a presentation by Vijay Kumar, General Manager, Revenue, NBPDCL at a recent Power Line conference