The insulation of transmission lines influences their cost and reliability. Therefore, there is a need to lower the chances of line failure and simultaneously reduce the cost of insulation.

Design considerations for insulators have evolved over the years. Recent advancements in the designs of circuit breakers and other protective devices have reduced the effects of switching transitions and power frequency during overvoltage conditions. This has considerably lowered insulation requirements for extra high voltage (EHV) networks. Circuit breakers can be equipped with pre-insertion resistors, improved lightning arresters  and bus-car protection, which limit the effects of switching overvoltage to a large extent. In addition, the provision of shunt reactors on EHV lines for absorbing excessive reactive power limits switching surge overvoltage and prevents abnormally high fundamental frequency and harmonic voltage. Equipping a system with sophisticated earthing also lowers its insulation requirements.

A transmission line transmits electrical energy in bulk from the generating station to the distribution station. The maximum generation voltage in India is 11 kV, and the quantum of power to be transmitted is very large (especially at low voltage levels). Therefore, the voltage is stepped up to higher levels using step-up transformers and then transmitted through an EHV system. Though an EHV system offers advantages like reduced conductor size and costs, it escalates the need for insulation in the transmission line. The cost of insulation also increases as the separation between conductors needs to be augmented to avoid electrical discharge. The corona losses in an EHV system are high as well due to the communication line and EHV line running on the same tower, creating problems pertaining to radio interference with the communication circuit, among other issues.

An EHV system is also prone to over-voltage, necessitating a higher level of insulation. The basic function of an insulator is to prevent flashovers in the event of overvoltage, which occurs due to switching surges (caused by the switching off of long lines in no-load situations, the interruption of low inductive currents like transformer magnetising currents, energising lines of no load, etc.); power frequency overvoltage (caused by interruptions in a loaded line at one end only, especially when it is long and the impedance is high; the occurrence of a single phase or two phases to earth fault; by the sudden connection of an open line to the source; at the free end of a line that is connected at only one end); and overvoltage caused by direct strokes of lightning.

A critical aspect of transmission line insulation is that the string insulation must be sufficient to prevent a flashover in case of overvoltage or switching surges. All abnormal and prevailing circumstances that affect the frequency of flashovers like rain, dust, insulator pollution and fog must be considered in insulator designs. It is also necessary to allow for safety margins in unforeseen conditions.

Overhead line insulators are used to separate line conductors from each other and from supporting structures. Some key considerations in insulator designs are that they should be able to withstand overvoltage due to lightning, switching or other causes under severe conditions; possess high mechanical strength to bear conductor load under adverse loading conditions; have high resistance to temperature changes to reduce damage from flashovers; and minimise the leakage of current to the earth to keep the corona loss and ratio of interference within reasonable limits. In addition, the insulator material should have high electric resistance and high relative permittivity to augment its dielectric strength. It should be non-porous and free from impurities and cracks, which lowers the permittivity of the material.

The most commonly used material for insulators in overhead lines is porcelain. In addition, glass, steatite and other special composition materials are also used often. A basic advantage of porcelain is that it is mechanically strong and offers better protection from leakage. Meanwhile, a glass insulator is less affected by changes in temperature. 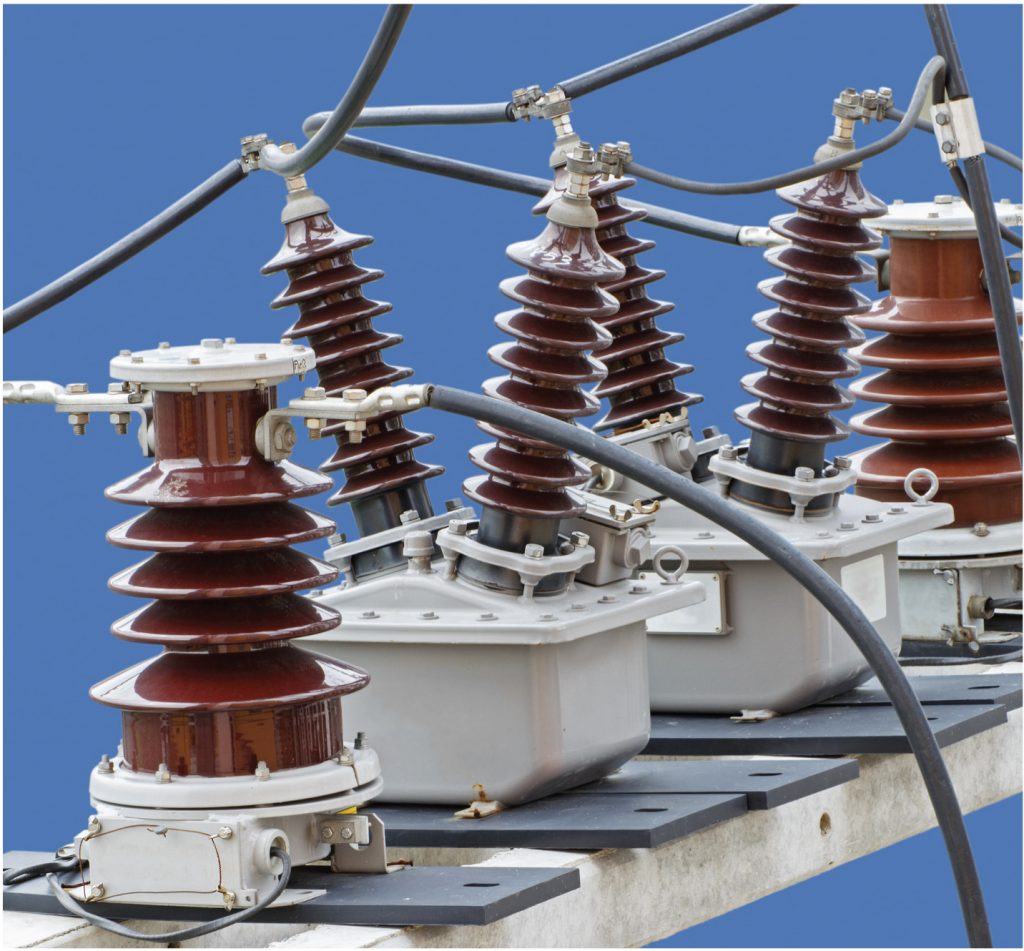 A suspension insulator, used for voltage levels beyond 33 kV, consists of a number of separate insulator units connected by metal lines to form a flexible chain or string. Each unit is designed for operating voltages at around 11 kV. A string can be assembled by connecting several units to suit the voltage and weather conditions. In case the line is to operate on a higher voltage in the future, more insulator units can be added on the same string. In case a unit is damaged, only that one can be replaced.

Strain (or tension) insulators are used to relieve the line of excessive tension arising at the dead end, corners and sharp turns. They are designed for handling mechanical stresses at angle positions where there is a change in the line direction or a termination of the line. For high voltage lines with longer spans and greater mechanical loading, suspension insulator strings are arranged horizontally. In case a single string is not sufficient for taking the load, two or more strings can be deployed in parallel.

Insulators are required to withstand mechanical as well as electrical stresses. Electrical stresses occur primarily due to line voltage and can lead to insulator failure and electrical breakdowns either through flashover or puncture. If there is a flashover, the insulator will continue to act in its proper capacity unless the extreme heat generated by the process destroys it completely. When there is  a puncture (when voltage levels are higher than in the case of a flashover and the voltage flows inside the insulator), the insulator is completely destroyed. In practice, porcelain of sufficient thickness is provided in the insulator to avoid puncture by the line voltage.

The choice of insulator thus affects the cost of the conductor as well as of other components in the transmission system. Therefore, it is critical to choose the level of insulation judiciously so that it meets the exact requirements.