Insulators are a key component of overhead lines and are used to insulate live conductors from transmission and distribution towers. They are also required to carry high tension or compressive loads. For the successful utilisation of insulators, the insulating material should be mechanically strong to carry tension load and conductor weight as well as have very high dielectric strength to withstand voltage stresses. It must also possess high insulation resistance to prevent leakage current.

Electrical insulators are generally made of porcelain, glass or polymeric composite. Both glass and porcelain are commonly used insulator materials, and there is not much difference in the cost and performance of both. However, composite insulators are increasingly replacing porcelain insulators as the former are best suited for compact tower arrangements.

Initially, insulators were made primarily of glass; however, these failed to withstand high temperatures. With the introduction of higher voltages in the 1890s, power utilities started installing porcelain insulators with special coatings and designs. At present, both types of insulators are widely in use, with each having their associated benefits and limitations.

Glass is made through a process called annealing and it has a higher dielectric strength as compared to porcelain. While the resistivity of glass is very high, the coefficient of thermal expansion is low. Glass insulators also have higher tensile strength and do not heat up in sunlight, unlike porcelain.

Further, impurities and air bubbles can easily be detected inside the insulator body due to the transparency of glass. Glass also has a much longer service life as ageing does not have any effect on its mechanical and electrical properties. An additional advantage of the toughened glass used in overhead line installations is that broken glass insulators tend to shatter completely upon impact and are therefore easily visible during inspection. In addition, glass is cheaper than porcelain.

In spite of all these benefits, porcelain is the most commonly used material for manufacturing insulators for overhead transmission lines due to a number of reasons. Such insulators are made from clay, quartz or aluminium silicate and feldspar, and are covered with a smooth glaze to shed dust and moisture. It is critical to ensure that the porcelain does not have any porosity since this is the main cause of deterioration of dielectric strength. It should also be free from impurities and air bubbles as this affects the insulation properties.

The key advantage of porcelain is that it does not have any cracks, holes, laminations, etc. and its insulation resistance is very high. Also, the dielectric strength of porcelain insulators is very high at about 60 kV per cm. A key advantage of porcelain is that, unlike glass, it can be cast in irregular shapes for higher voltages. In the case of glass, irregular cooling often leads to internal strains. Besides, moisture easily condenses on a glass surface, which creates a path for the leaked current.

During the 1960s, insulators with porcelain sheds supported by an epoxy resin fibreglass rod were developed; however, these were not widely used owing to the introduction of lighter-weight polymeric insulating materials. Polymeric outdoor insulators for transmission lines were developed during the 1960s and the first generation of commercial polymeric transmission line insulators were introduced by manufacturers in the 1970s.

In fact, by the 1980s, a large number of utilities started experimenting with first-generation composite insulators, even though the results were not encouraging. These insulators were initially installed in short sections of lines and at trouble spots, mostly for experimentation and data gathering purposes. Intensive research efforts further led to the development of second-generation composite transmission line insulators. These improved units have significant advantages such as better corona resistance and slip-free end fitting.

Polymer insulators are light in weight and small in size as compared to porcelain or glass insulators, which reduces the installation cost. Their light weight implies that polymer insulators impose less load on the support structure, leading to an overall low cost of installation. They provide high creepage offset and resistance to vandalism.

In addition, polymer insulators are very flexible, which significantly reduces the chances of breakage. Also, they have higher tensile strength compared to porcelain insulators. They are better suited for polluted areas and require less cleaning due to the hydrophobic nature of the insulator.

However, there are a number of limitations associated with polymer insulators such as high leakage current and short lifespan. Besides, moisture can enter the core of the insulator if there is any unwanted gap between the core and the weather sheds. Over-crimping in the end fittings may lead to cracks in the core, which would, in turn, lead to mechanical failure of the polymer insulator. 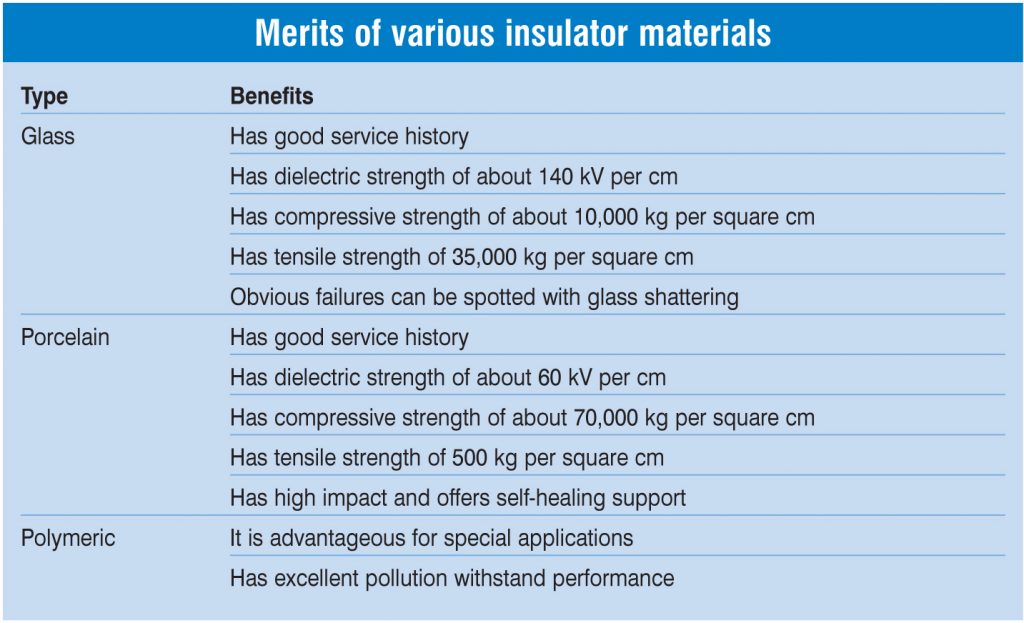 Another disadvantage is that polymeric insulators melt and bend in case of a fire, which is not the case with glass or porcelain insulators. Such insulators have failed to perform in areas close to the ocean coastline where there are high levels of salt in the air. Also, these insulators are more prone to bird attacks.

Given their limitations, polymer insulators are considered most suitable for indoor applications and bushings. They are used to a limited extent on medium voltage transformers installed outdoors. Such insulators have been mainly used on neutral connections where insulation is not subject to the same dielectric stress as the phase conductor supports. Cap and pin insulators installed on low voltage distribution lines and long rod insulators installed on transmission lines may employ composite insulators based on the high tensile strength core of the glass fibre and resin.

Globally, various power utilities have been utilising polymer composite-based insulators for certain applications, and the results have been fairly satisfactory under various climatic conditions over the past 20 years. However, there is still some reluctance to use polymer insulators for overhead line works, primarily due to doubts about their long-term resistance to ultraviolet exposure and weathering.

Glass and porcelain are the most widely used materials for making insulators. Although polymeric composite-based insulator materials at present do not have the long-term proven service life of glass and porcelain, some utilities have been gradually deploying these.