Coal continues to be the mainstay of India’s power generation activity, with a share of over 60 per cent in the total installed capacity (as of December 2015). However, over the years, the costs of coal-based generation have followed an increasing trend, primarily due to issues in domestic fuel availability. This has fostered an undue reliance on coal imports, rendering costs more vulnerable to the volatility in global commodity prices and the forex market.

The generation costs of coal-based plants have been increasing consistently over the past few years. For instance, the average tariff for NTPC Limited increased from Rs 2.46 per unit in 2010-11 to Rs 3.11 per unit in 2014-15, marking a compound annual growth rate (CAGR) of 6.04 per cent.

The capital costs of coal-based projects tend to escalate significantly from the initial cost to the cost at the time of commissioning. These cost overruns can be primarily attributed to issues like delays in land acquisition, infrastructure development, and the process of securing clearances from the Ministry of Environment, Forest and Climate Change. All these factors have an impact on the indirect costs of a project. Interest rate hikes also lead to cost escalations.

O&M costs are largely determined by the Central Electricity Regulatory Commission (CERC) and benchmarks are available for the same. They are primarily driven by the system’s inflation expectations. The CERC has notified the benchmark O&M costs for coal-based generation projects (600 MW) for the period from 2014-15 to 2018-19. As per this notification, O&M expenses will be escalated at the rate of 6.3 per cent. The escalation rate was 5.7 per cent for deducing O&M expenses for 2009-10 and 2013-14. As per ICRA, O&M costs for coal-based projects are estimated to increase from Rs 144 million per MW in 2014-15 to Rs 184 million per MW in 2018-19.

However, the major component of generation costs is the fuel or energy charge. Between 2010-11 and 2014-15, NTPC’s fuel charges increased at a CAGR of 5.84 per cent from Rs 1.61 per unit in 2010-11 to Rs 2.04 per unit in 2014-15, mainly due to the increased dependence on costly imported coal. Though the country’s total coal-based installed capacity has increased by over 10 per cent in the past six to seven years, coal production has remained largely subdued at single-digit levels. However, with the government’s increasing focus on enhancing domestic coal production, Coal India Limited recorded a growth of about 7 per cent in 2014-15 compared to a marginal level of 1-2 per cent over the three years prior to that. 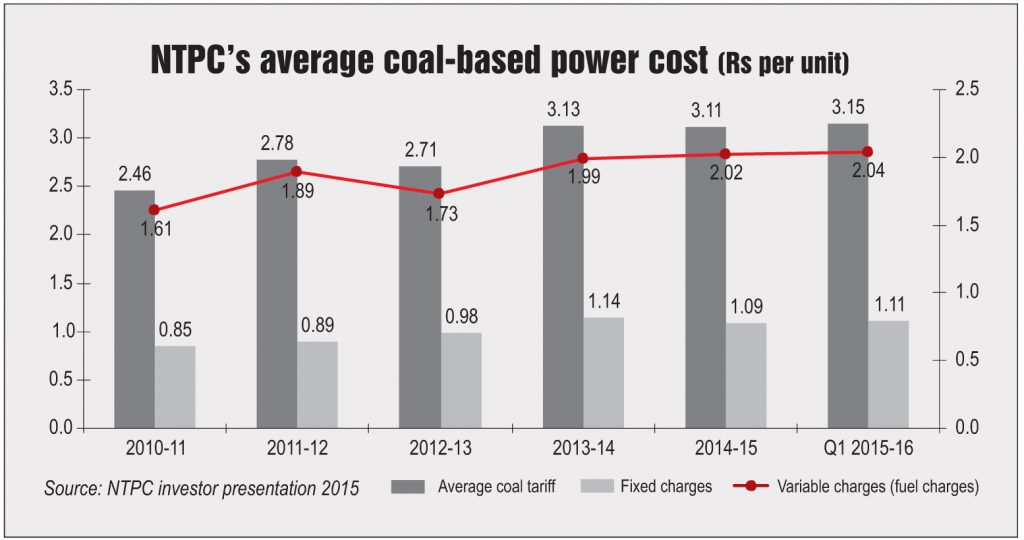 The reliance on imports has a direct impact on generation costs as imported coal is typically priced higher than domestic coal due to its high calorific value as well as factors like freight charges and transportation charges. As per ICRA’s estimates, blending 50 per cent of imported coal for thermal power plants (TPPs) located in the hinterlands increases the cost of generation by about Re 0.80 per unit (at current market prices).

The increasing dependence on coal imports has made generation costs more sensitive to the volatility in rupee-dollar exchange rates. Although global coal prices are declining due to a supply glut, the positive impact of this decrease has been dampened in the Indian context due to the depreciation of the rupee against the dollar. Forex fluctuations do not affect only TPPs based on imported coal but also those based on imported equipment or involving foreign debt, thereby affecting generation tariffs. According to ICRA, keeping fuel prices constant, for every Re 1 depreciation against the dollar, the cost of generation increases by about 3.5 paise per unit for an imported coal-based plant, and by about 1.5 paise per unit for a domestic coal-based plant (in the hinterlands with a 1:1 coal-blending mix). Meanwhile, the capital cost of a project based on imported boiler, turbine and generator equipment increases by 1 per cent for every Re 1 depreciation against the dollar.

In recent years, there has been a slowdown in competitive bidding for long-term power procurement by utilities. This can be majorly attributed to the higher bids being offered by developers due to an increase in generation costs, along with execution issues and the weak financial health of discoms.

Under Case I, there was a lull in contracted capacities in 2012-13. However, during 2013-14, around 3,235 MW was contracted through the Case I route, but this was based on the earlier standard bidding documents (SBDs) issued by Uttar Pradesh and Rajasthan. The bids were evaluated based on a 25-year levellised tariff and the discovered prices were in the range of Rs 4.50-Rs 4.89 per unit for Rajasthan, and Rs 4.48-Rs 5.70 per unit for Uttar Pradesh.

The Ministry of Power (MoP) notified the revised SBDs for projects on a Case II and Case I basis in September 2013 and October 2013 respectively. Under these, bidding was undertaken on the basis of the single parameter of capacity charge, with the fuel cost to be passed through. The new SBDs for Case II projects notified by the MoP in September 2013 changed the basic bidding framework to design-build-finance-operate-transfer (DBFOT) from build-own-operate (BOO). However, this was not to the industry’s liking. Since the SBD revision, Kerala and Andhra Pradesh have issued tenders under Case I bids, and the discovered prices were in the range of Rs 3.60-Rs 4.29 and Rs 4.27-Rs 4.49 respectively. 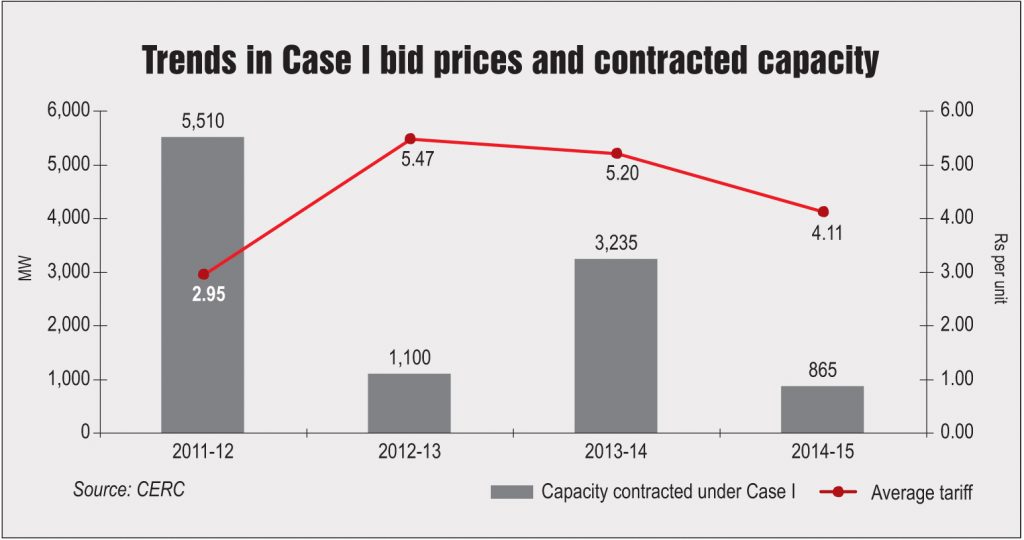 Due to the industry backlash against the DBFOT model, the Case I standard bidding guidelines were revised again, and the new ones were notified by the ministry in May 2015. These amendments brought back the BOO model and also changed the contract period from 25 years to seven years and above. In addition, they introduced the requirement of the distribution licensee settling the deviations from SBDs, with the approval of the appropriate commission, instead of the central government. Meanwhile, following the exit of private players from the Bedabahal and Cheyyur ultra mega power projects (UMPPs), which were bid out as per the Case II SBDs, a need was felt to further rework the guidelines. In December 2015, the Pratyush Sinha Committee released a draft of the revised SBDs for imported coal-based UMPPs.

The proposed guidelines call for the pass-through of input cost variations to consumers. The escalation rate for variable charges (separately for fuel, sea transportation, inland handling, inland transportation and O&M) will be notified by the CERC every year. A key provision has been included in the context of the blending of imported coal with domestic coal in order to reduce the impact of imported coal price fluctuations. The central government will facilitate coal supply for the same for five years. However, the blending option will be facilitated only in a situation where the cost of imported coal escalates by 10 per cent over the price quoted during bidding. To bring down fuel costs, blending of up to 30 per cent will be allowed. This revision is of immense significance, particularly in the case of the Mundra UMPP, which is seeking a compensatory tariff following the rise in Indonesian coal prices.

The increased production by Coal India Limited in the past year and the decline in coal imports since July 2015 are positive signs for the sector. The steps being taken in the direction of coal linkage rationalisation and coal swapping will also help reduce generation costs. Moreover, if the Ujwal Discom Assurance Yojana is successful in bringing about a revival in the distribution segment, the pace of power procurement through the competitive bidding route is expected to gather momentum. The key, however, will lie in sustaining the increase in domestic coal production to insulate generation costs from the uncertainties prevailing in international markets. n

With inputs from a presentation by Sabyasachi Majumdar, Senior Vice-President, ICRA Limited