Rural electrification has been one of the key focus areas of the current government. The central government aims to electrify all villages by May 2018 and provide quality and reliable electricity to all households by 2019 through its flagship programme, Deendayal Upadhyaya Gram Jyoti Yojana (DDUGJY). While 98 per cent of the villages in India have been “electrified”, electricity is still to reach all homes. Moreover, the quality, reliability and duration of supply to the “electrified” villages continue to be areas of concern.

What does electrification mean?

As per the current definition, which was notified by the Ministry of Power (MoP) in February 2004, a village would be declared electrified if: basic infrastructure such as a distribution transformer (DTs) and distribution lines are provided in the inhabited locality as well as a minimum of one dalit basti/hamlet where it exists (however, for electrification through non-conventional energy sources, a DT may not be necessary); electricity is provided to public places like schools, panchayat offices, health centres, etc.; and the number of households electrified is at least 10 per cent of the total number of households in the village.

This definition is wider and more inclusive and encompassing than the previous ones; however, the adequacy of this definition is still debatable. The definition requires only 10 per cent of the households in a village to be connected for it to be classified as electrified. This implies that even if a large number of households in a village remain unconnected, the village will still qualify as an electrified village, with little or no meaning. Moreover, the definition does not specify a minimum number of hours of supply or any norms for the quality of supply. As a result, while the percentage of electrified villages is close to 100, the percentage of connected households is still fairly low, that too, with limited electricity supply. 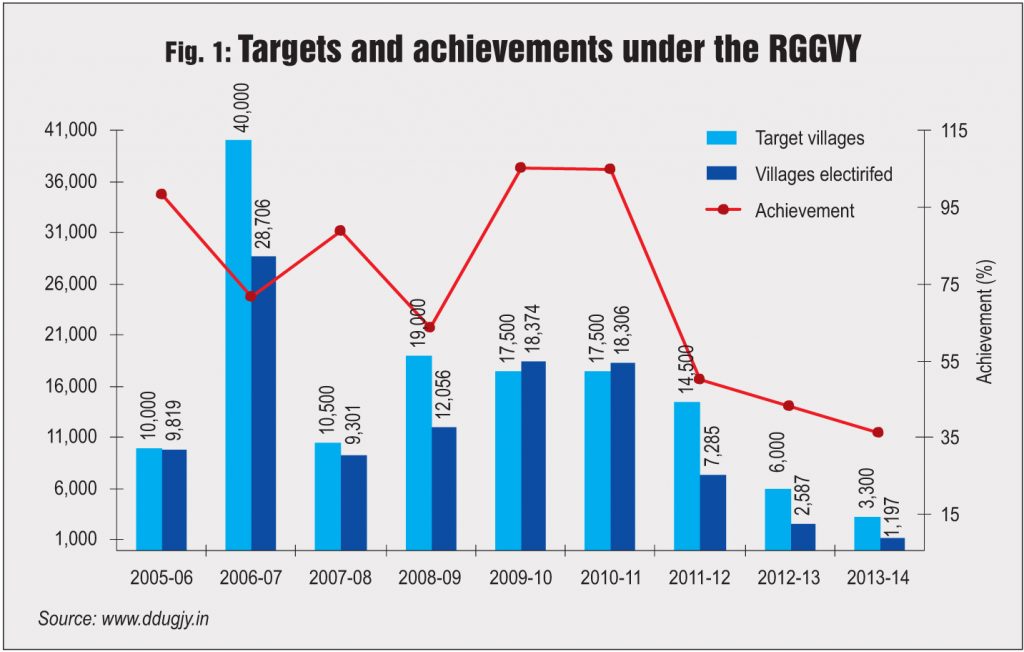 The first major initiative was the establishment of the Rural Electrification Corporation (REC) in 1969 with the objective of providing finance and promoting rural electrification across the country. REC has been responsible for the electrification of over 100,000 villages in the past 10 years. A number of other initiatives were also taken by the government, which were subsequently merged with the Rajiv Gandhi Grameen Vidyutikaran Yojana (RGGVY), following its launch in 2005.

The RGGVY was aimed at providing energy access to all by 2009 and at least one unit of electricity per household per day by 2012. While more than 100,000 villages had been electrified under the RGGVY, the progress was slower than targeted. The scheme was to officially end in 2009, however, due to non-attainment of the electrification targets, certain allocations were made for its continuation in the Twelfth Plan period (2012-17) as well. The actual programme cost more than doubled – from Rs 160 billion in 2005 to around Rs 355 billion in 2013.

In terms of achieving the annual targets of lighting up unelectrified villages, the performance was much better in the initial years than in the last three years of the programme. In fact, during 2009-10 and 2010-11, the number of villages electrified under the scheme was greater than the targeted number. However, during the period 2011-12 to 2013-14, the achievement remained in the range of 35-50 per cent of the target. Not only did the annual target achievement rate of the RGGVY dip sharply over these years, but the number of villages energised was also very low.

In December 2014, the government announced the DDUGJY with some modifications to the RGGVY. It aims at feeder segregation and strengthening and augmentation of sub-transmission and distribution infrastructure in rural areas, including metering of distribution transformers/feeders/consumers, apart from the electrification of unelectrified villages and households. The proposed works under the scheme include the construction or segregation of 16,500 feeders, the laying of 21,900 ckt. km of 33 kV or 66 kV lines, the setting up of 1,620 new substations, the augmentation of 1,615 existing substations, metering of feeders, DTs and consumers, and other low tention infrastructure works. Under the scheme, 3,578 projects – 606 grid connected and 2,972 off-grid – have been sanctioned. 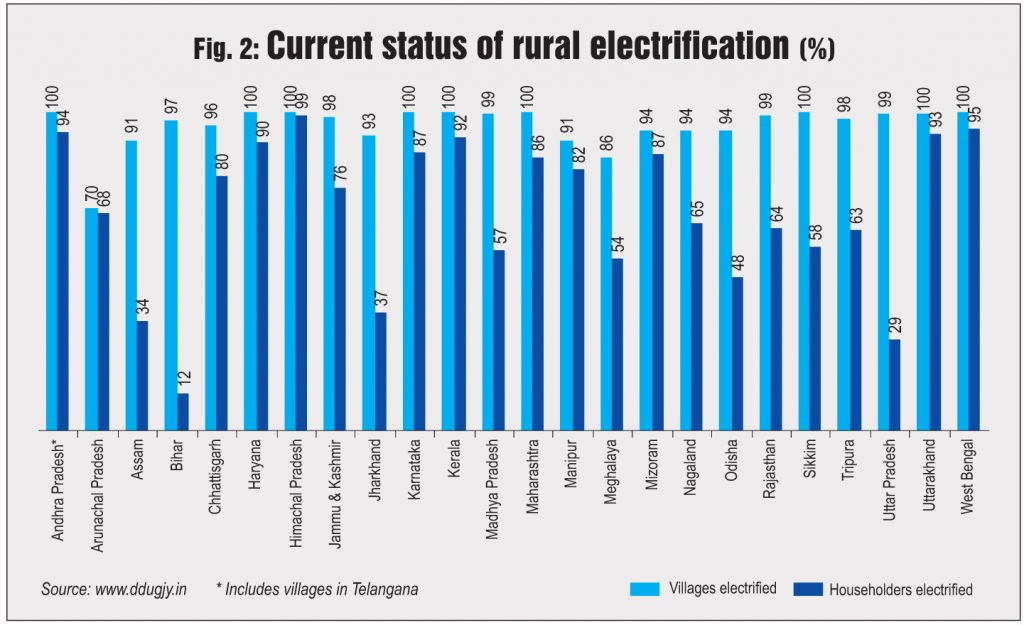 As mentioned earlier, nearly 98 per cent of the total inhabited villages have been electrified in India till now, but only around 64 per cent of the households have electricity connections. Moreover, habitations with population below one hundred are not yet considered for electrification.

This implies that a large part of the electrification and energy access are superficial. Electrification has limited meaning and impact unless it reaches the maximum number of households. Moreover, “actual” supply of electricity, which is not only available at all times but is also reliable, is critical for meaningful electrification and development of the rural areas.

Under the DDUGJY, the government has targeted to electrify all villages by May 2018 and all households by 2019. However, it has estimated that it may be able to electrify all the villages by December 2016 itself. As on date, 11,444 villages remain to be electrified. Of these, 7,847 villages are planned to be electrified through the grid, 3,148 villages through off-grid systems and 449 villages under various state plans. Projects for all the unelectrified villages have been sanctioned already and the states are required to confirm if any village has been left out. While some of these have also been awarded for implementation, the remaining are targeted to be awarded by March 2016.

Along with the electrification of rural areas, the scheme also focuses on metering. Apart from metering at the consumer end, metering of DTs and feeders is also planned, which will facilitate energy accounting. This is likely to help utilities in identifying areas of high losses and initiating remedial measures for loss reduction.

The benefits of energy access and security are no doubt immense. Electricity supply to rural areas has led to significant development of these areas. It has enabled people to use electricity for various appliances including lights, fans, televisions and refrigerators, given them access to better community services (public lighting, health, education), and enhanced livelihoods (more income generation options, improved irrigation and more productive hours).

In impoverished and undeveloped areas, even small amounts of electricity have freed up large amounts of human time and effort. In such areas, people physically carry water and fuel, have limited storage options for food, and their activity is limited to daylight hours. Access to electricity and the use of electrical appliances such as lighting, water pumps and refrigerators have improved people’s productivity. According to a World Bank report (October 2015), rural electrification in India has led to changes in consumption and earnings, with an increase in labour supply (both men and women), and promoted girls’ schooling by reallocating their time to tasks more conducive to school attendance.

Rural electrification has also led to a reduction in the use of kerosene for lighting purposes. As per the National Sample Survey (July 2011-June 2012), the percentage of rural households using kerosene for lighting almost halved between 1999 and 2011. With the increase in electrification, the use of kerosene for lighting has fallen and is now mostly a backup resource for power outages. The Ministry of Petroleum and Natural Gas expects kerosene demand in India to drop by around 18 per cent by March 2017 as more households shift to electricity for lighting with more rural areas gaining access to power. Solar lanterns, which are cleaner and more cost-effective, have also gained significantly as a replacement to kerosene-lit lanterns.

A large part of the demand for electricity in rural areas is for powering irrigation pumps. In this regard, the deployment of solar pumps not only provides access to energy where the grid is not available, but also reduces power demand in the case of grid-connected pumps and eliminates the need for rostering of agricultural supply. The central government as well as various state governments have been providing subsidies for solar pumps for promoting their use.

While India may soon be ready to claim 100 per cent electrification, there is still a long way to go before the country achieves electrification in its true sense. Efforts are being made and some results are coming in; however, challenges remain in terms of the large number of unconnected households and unsatisfactory quality of supply. Once the requisite infrastructure is in place, greater attention can be placed on connecting all households and improving the quality and reliability of electricity supply.