The slew of reforms by the government in the power sector had raised industry expectations from the budget. It was anticipated that it would include key announcements that would benefit the sector. However, the budget cannot really be termed as a game changer for the sector. But, there are positives such as the focus on the renewable energy segment and rural electrification, promoting domestic manufacturing, diversification of sources for power generation, resolving contractual disputes, etc. The budget projects the government’s vision for achieving energy security for the country in the long run. Power Line analyses the budget and the impact it is expected to have on the power sector…

The government has also made clear its intention to diversify the sources of power generation for long-term stability. A comprehensive plan, spanning the next 15 to 20 years, is being drawn up to augment the investment in nuclear power generation. Budgetary allocation of up to Rs 30 billion per annum, together with public sector investments, will be leveraged to facilitate the required investment for this purpose.

In order to augment infrastructure spending, the government will permit the mobilisation of additional finances to the extent of Rs 313 billion by the National Highways Authority of India (NHAI), the Power Finance Corporation (PFC), the Rural Electrification Corporation (REC), Indian Renewable Energy Development Agency (IREDA), the National Bank for Agriculture and Rural Development (NABARD) and the Inland Water Authority through the issue of bonds during 2016-17.

Recognising the role of the private sector in the development of infrastructure, the government has introduced new initiatives to bolster the sector by increasing the effectiveness of the public-private partnership (PPP) model. The Public Utility (Resolution of Disputes) Bill is expected to be introduced during 2016-17 to streamline institutional arrangements for the resolution of disputes in infrastructure-related construction contracts, PPP and public utility contracts. Also, guidelines for renegotiation of PPP concession agreements will be issued, keeping in view the long-term nature of such contracts and the potential uncertainties involved in execution.

The coal cess has been doubled from Rs 200 per tonne to Rs 400 per tonne. The accelerated depreciation (AD) for renewable energy projects has also been reduced from 80 per cent to 40 per cent, effective April 1, 2017.

As part of the drive towards self-sufficiency in fuel sources, the government has announced its intention to incentivise gas production from deep-water, ultra deep-water and high pressure-high temperature areas, which are currently not exploited on account of higher costs and higher risks. For new discoveries and areas that are yet to commence production, the government will provide calibrated marketing freedom and a pre-determined ceiling price, which will be discovered on the principle of landed price of alternative fuels. Just days after the budget, the cabinet has cleared a new pricing formula for undeveloped gas discoveries in difficult areas. The price will be the lower of the weighted average of fuel oil and imported liquefied natural gas (LNG) and weighted average of fuel oil, naphtha and imported coal. At current rates, this will come to around $7 per mmBtu. 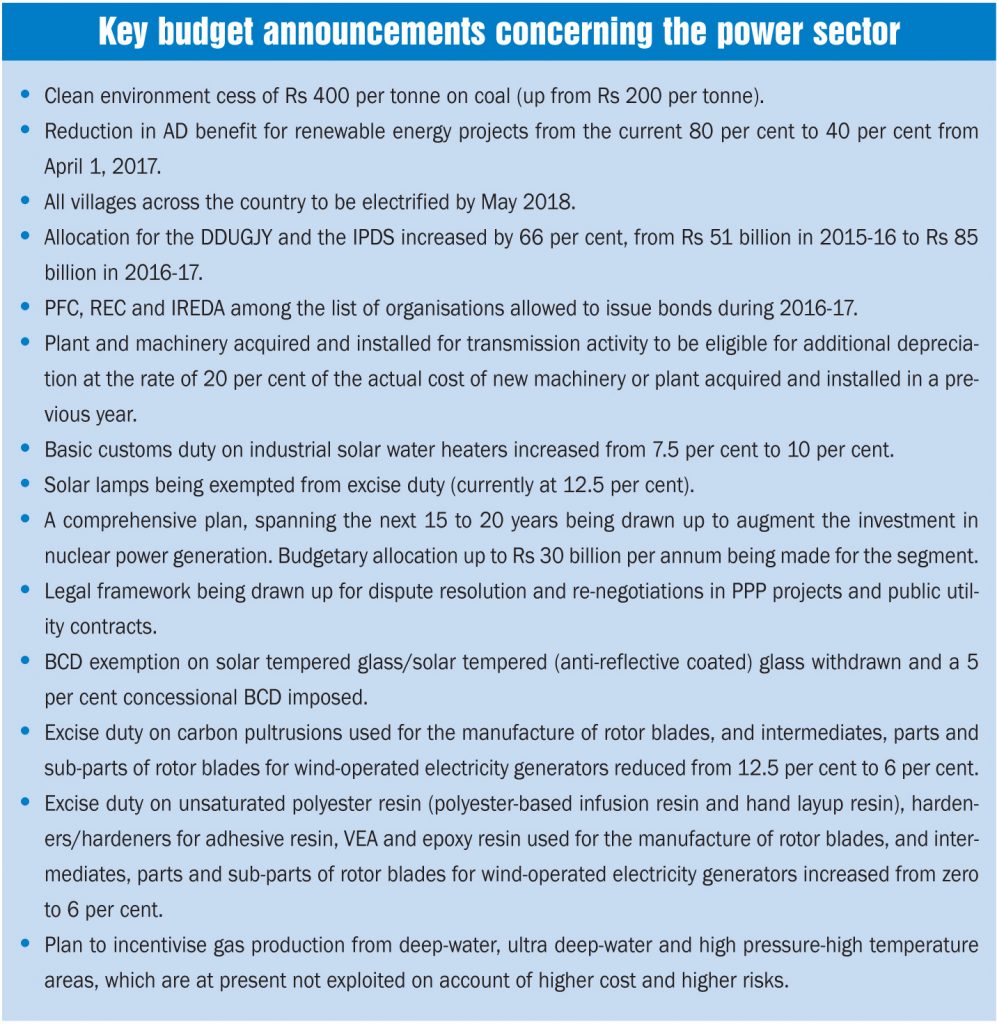 A new policy for the management of government investment in public sector enterprises, including disinvestment and strategic sale, has been approved. The government wishes to leverage the assets of central public sector enterprises (CPSEs) for the generation of resources for investment in new projects. It will encourage CPSEs to divest individual assets like land and manufacturing units to release their asset value for making investments in new projects. The NITI Aayog will identify the CPSEs for strategic sale.

The focus on Make in India is also clear in the budget. The basic customs duty (BCD) on industrial solar water heaters has been increased from 7.5 per cent to 10 per cent. BCD exemption on solar tempered glass/solar tempered (anti-reflective coated) glass has been withdrawn, and a 5 per cent concessional BCD has been imposed, subject to actual user conditions.

The doubling of the coal cess, now known as the clean environment cess, will have a significant impact on thermal power generation. It will increase generation costs by around 10 paise per unit. For retail tariffs, this will mean an increase of 16-18 paise per unit. The government plans to use this money for the development of renewable energy. However, for the conventional energy sector, which is already reeling from low demand and hence low plant load factors (PLFs), this will be another challenge. Thermal power plants though, will be able to pass this on to the consumers, as coal costs are a pass-through. Distribution utilities will need to absorb this cost and will incorporate this in their annual revenue requirement (ARR) to pass it on to consumers. This goes against the government’s intent of providing power at an affordable cost. For the renewable energy segment on the other hand, the increase in cess is beneficial in two ways. One, it will make funds available to the government for the development of this segment. Two, it will bring the conventional power tariff closer to that of power generated from renewable energy sources.

Nuclear power finds a special mention in the budget announcements. This shows the government’s intent to diversify the country’s energy mix. While it has already set a target of 175 GW for renewable energy capacity by 2022, there is no such target for nuclear power. Nuclear power offers the advantage of large-scale capacity additions and is a clean source of energy. At present, there is 5,780 MW of nuclear power capacity in the country, the most recent addition being Unit 1 of the Kudankulam Atomic Power Project in Tamil Nadu. There is another 3,800 MW of nuclear power capacity that is under construction in the country across three projects. A number of CPSEs have also shown interest in investing in this segment in joint venture with Nuclear Power Corporation of India Limited (NPCIL), which is currently the sole operator of nuclear power plants.

Gas-based generation has seen its role declining in the overall power mix in the country. This has been due to the lack of availability of domestic gas to run the plants, which has left many plants stranded. In this regard, the step to incentivise gas production from deep-water, ultra deep-water and high pressure-high temperature areas, which are currently not exploited, can lead to some relief in the long run. This, again, is a step towards increasing the energy security of the country.

The provision of a legal framework for dispute resolution and re-negotiations in PPP projects and public utility contracts is a welcome step. There are a number of projects that are stalled because of disputes related to PPAs. The new legal framework will allow a re-negotiation of PPAs and will help end the logjam being faced by various projects.

Rural electrification has always been high on the government’s agenda. Rural electrification is being implemented with ever more vigour and is being tracked and monitored closely using innovative technology solutions such as the Grameen Vidyutikaran (GARV) app. Of the 18,452 villages that were yet to be electrified by April 1, 2015, about 6,874 have already been electrified (as per the GARV app accessed on March 21, 2016) while 11,578 remain to be electrified.

Under the DDUGJY, projects worth Rs 411 billion were sanctioned and Rs 10.96 billion of funds released as of February 29, 2016. Increasing rural electrification will also increase the demand for power and hence increase the PLFs for generation companies. The increase in the allocation of funds to the DDUGJY and the IPDS will give a boost to distribution infrastructure improvement. The proposal to exempt solar lamps from excise duty (currently at 12.5 per cent) is also a positive development, as it will help shift rural households away from kerosene to meet their lighting needs, saving money as well as protecting the environment.

Impact on the renewable energy sector

A key announcement that will impact the sector is the reduction in AD for renewable energy projects to 40 per cent from the current 80 per cent for the first year. This will be applicable from April 2017. This would lead to an increase in tariffs for projects coming up after April 2017. In the past, a significant portion of wind power capacity addition has been done by industries to avail of tax benefits. However, over the past few years, independent power producers (IPPs) have taken the lead in wind capacity addition. These players look at generation-based incentive (GBI) rather than AD as a key benefit. So, from the point of view of these players, the reduction in AD is not expected to make much of a difference.

However, the other section of companies, not having power as their core business will get impacted. As such, it is expected that there will be a beeline of such players in the next fiscal to add capacity to benefit from AD. So, there could be a spurt in capacity addition as was seen once earlier, before the AD benefit was withdrawn.

Three power sector lending agencies – PFC, REC and IREDA – are among those identified by the government to be allowed to raise additional financing through bonds. This will bring liquidity into the system and allow funding of more power projects.

The budget contains certain provisions aimed at pushing indigenous manufacturing in the sector. The increase in customs duty on industrial solar heaters and solar tempered glass is a step in this direction. This will encourage manufacturers of such equipment to set up or expand their operations in India.

As far as wind equipment manufacturing is concerned, the budget has proposed a reduction in excise duty for certain raw material for the manufacture of wind turbines, and an increase in certain others. As such, it is not very clear whether the overall impact on costs will be positive or negative.

The transmission and distribution (T&D) sector is also set to get a shot in the arm with additional depreciation benefits announced. This sector is expected to see significant growth, with extensive plans for the expansion of the T&D network in the country. The Ujwal Discom Assurance Yojana (UDAY) is expected to improve the financial health of the discoms, which, in turn, would lead to investments in the distribution network.

All in all, the power sector has been appreciative of the budget and industry reactions have been largely positive. However, there are a few areas of concern that have been pointed out. These include the increase in the coal cess and the reduction in AD on renewable energy projects from April 2017. Both of these measures are expected to lead to an increase in power tariffs. The budget clearly brings out the government’s focus on rural electrification and renewable energy, which is encouraging. The success of the power sector will depend on the turnaround of the distribution utilities, which the government is aiming to achieve through the UDAY scheme. Another issue that needs to be tackled is the declining PLFs of generating stations.