Wind power accounts for 8.7 per cent of the total installed capacity base and almost 65 per cent of the entire renewable energy capacity in the country. As per the Global Wind Energy Council, India is the fifth largest market for wind energy globally after China, the US, Germany and Spain (as of 2014). Significant potential, mature technology and consistent policy support have played a key role in the expansion of wind power in India. As per the National Institute of Wind Energy (NIWE), the country’s wind energy potential at 100 metres above ground level is over 302 GW. The wind power sector is poised for further growth in the years to come with the central government’s increasing focus on expanding renewable energy to ensure energy security.

Policy support continues to play a major role in the advancement of the wind power sector. The renewable purchase obligations (RPOs), generation-based incentives (GBIs) and the accelerated depreciation (AD) benefit have helped attract independent power producers as well as PSUs to the sector. As of 2014-15, the central government had contributed nearly Rs 10 billion as GBI for wind projects.

It must be noted, however, that in the Union Budget 2016-17, the government has announced a reduction in the AD benefit from 80 per cent to 40 per cent, with effect from April 1, 2017. This is expected to lead to a surge in investments in wind power in the next few months as companies will attempt to avail of the tax break during the remaining period. However, in the long term, it may dampen the expansion plans of wind energy developers who are dependent on AD as a tax-saving instrument.

However, other budget provisions like the increase in the clean environment cess from Rs 200 per tonne to Rs 400 per tonne of coal are likely to provide a significant boost to research and development (R&D) and other clean energy development activities.

The recent amendments to the Tariff Policy, 2006 augur well for the renewable energy sector, including wind power. The policy has introduced a concept of “renewable generation obligation” for new coal- and lignite-based power plants, under which new thermal power generators will be required to either set up or procure renewable capacity. Also, in order to reduce tariffs, renewable energy will be bundled with power generated from thermal plants whose power purchase agreements have expired. In addition, no interstate transmission charges will be levied on solar and wind power projects. Further, ancillary services to support grid operations will be developed for the expansion of renewable energy.

In September 2015, the government launched the National Offshore Wind Energy Policy with the aim of providing a framework for offshore wind energy development, including the setting up of offshore wind power projects, and R&D activities in waters (in or adjacent to the country) up to a seaward distance of 200 nautical miles from the baseline. Accordingly, there are plans to set up the country’s first offshore wind power project off the coast of Gujarat. The policy intends to provide a level playing field to all domestic and international investors. A wind atlas, a geographic information system-based tool to facilitate developers and policy planners in resource assessment, with information at 100 metre height, was also launched last year.

Meanwhile, at the state level, wind policies by various states provide the benefits of feed-in tariffs, allotment of sites and concessions for wheeling charges on state-owned grids, and banking of surplus energy for wind power producers.

Wind power tariffs are increasingly becoming more competitive with conventional sources. Today, industrial and commercial customers are willing to buy electricity from wind generators at tariffs ranging from Rs 4.50 to Rs 5.50 per unit compared to grid costs at Rs 7 per unit.

Wind turbine technology has improved significantly in recent years. With the availability of wind turbine generators of increasing rotor diameters and hub heights, it is possible to access wind resources in even low-potential regions. Further, according to industry estimates, plant load factors (PLFs) have improved by 80-100 per cent over the past seven to eight years for the existing wind power projects as a result of maturing technology. Accordingly, the cost per unit of generation has also improved by over 50 per cent during this period.

Further, trials for wind-solar hybrid power plants are under way. With huge solar power capacity addition plans lined up by the government, existing wind power plants can be used for the setting up of supplementary solar capacity. This would do away with the need for additional land or transmission infrastructure for solar projects.

With increasing pressure from regulators, state transcos and load centres are ensuring better grid integration for wind power through active power control based on frequency, tighter reactive power management, and more accurate forecasting and scheduling. These developments have significantly helped reduce the backing down of wind energy generators. 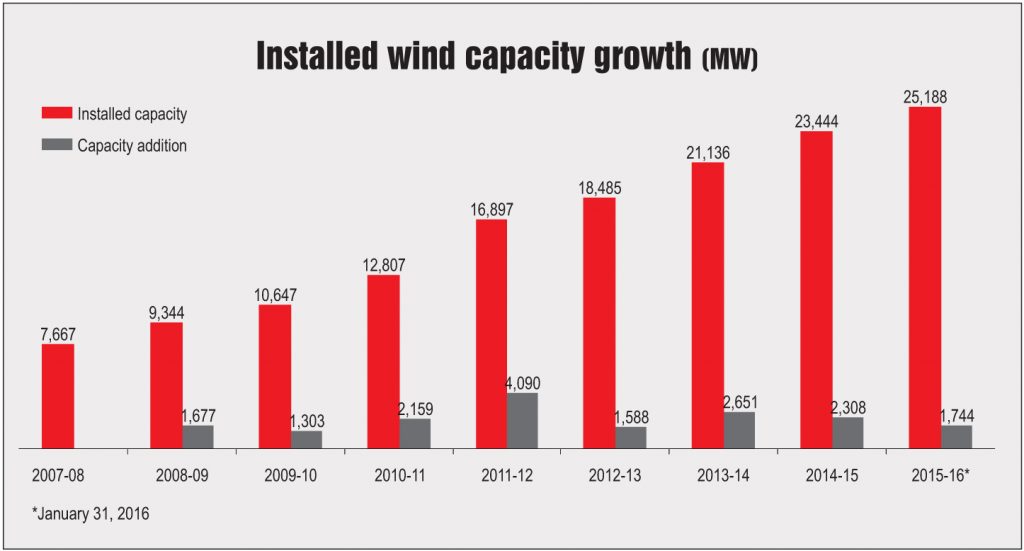 Developers and original equipment manufacturers (OEMs) cite high financing costs as a key challenge for implementing wind power projects. The limited availability of debt financing sources and soaring interest rates are a dampener for the sector. The poor financial health of state distribution utilities is another key issue as it impacts their ability to meet RPOs. However, the launch of the Ujwal Discom Assurance Yojana to revive discom finances is expected to help mitigate this challenge in the medium term.

Although the government is focusing on the augmentation and expansion of the grid to integrate the increasing amount of renewable energy, a lot still remains to be done. Weak compliance with the grid code by generators and operators needs to be looked into, besides accelerating transmission capacity expansion under the Green Energy Corridors project.

Last but not the least, transportation to remote project sites is another challenge faced by developers and OEMs due to inadequate infrastructure, which affects timely completion of projects. OEMs and project developers also face supply chain- and logistics-related challenges.

A conducive policy and regulatory framework as well as a positive business environment is expected to further accelerate the growth of the wind power sector in the long term. With an ambitious target of 175 GW of renewable energy by 2022, which includes 60 GW of wind energy, the government has taken a quantum leap in promoting renewables. Also, the government has proposed the launch of the National Wind Energy Mission to achieve the capacity addition targets and address the various challenges faced by the sector. Besides, there are proposals for the implementation of a dedicated renewable energy act to provide the requisite framework for facilitating increased use of renewable energy.

With inputs from a presentation by Vinod Kala, Founder and Managing Director, Emergent Ventures India Private Limited, at a recent Power Line conference