At the Conference of Parties (COP) 21 Summit held in Paris last year, India reiterated its commitment to reduce its energy intensity. The country has committed to cut the rate of emissions by 33-35 per cent by 2030 from the 2005 levels. While climate change is one of the key drivers of energy efficiency, it is also one of the important tools through which the country can bridge its power demand-supply gap.

Over the past few years, the Bureau of Energy Efficiency (BEE), under the aegis of the Ministry of Power (MoP), has spearheaded several energy efficiency initiatives.

The Perform, Achieve and Trade (PAT) mechanism was devised under the National Mission for Enhanced Energy Efficiency back in 2009. The scheme envisaged the identification of the highest energy consuming industries and the setting of  targets for them to reduce their specific energy consumption (SEC). Subsequently, eight sectors – thermal power plants (TPPs), iron and steel, cement, aluminium, fertilisers, paper and pulp, textiles and chlor-alkali – were specified  and 478 designated consumers (DCs) were identified within each of these. A baseline survey was conducted to measure the SEC of these consumers and, based on the baseline consumption, targets were set for each DC. This mechanism intended to reduce the SEC by 6.686 million tonnes of oil equivalent (mtoe) during Cycle 1, which ended in March 2015.

PAT is a market-based mechanism in the sense that industries that overachieve their targets will be issued energy saving certificates (ESCerts), which they can trade on the power exchanges. The buyers for these will be the industries that have not been able to meet their targets. The prices will be determined by the market based on the demand and supply of ESCerts.

The results of Cycle 1 of PAT have been very encouraging. There has been a saving of about 8.67 mtoe by the 427 DCs verified so far. This is 5.24 per cent of the total SEC of these DCs and 29 per cent higher than the targeted reduction in SEC. Further, it translates into CO2 mitigation of about 31 million tonnes (mt). 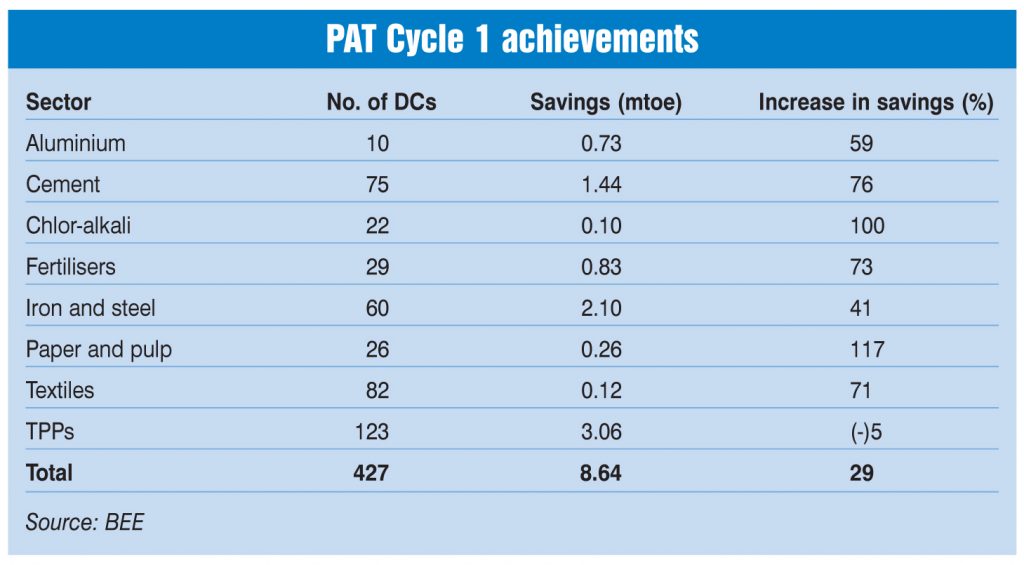 The duration of Cycle 2 will be from 2016-17 to 2018-19. This cycle includes 621 DCs across 11 sectors aggregating 227 mtoe of energy consumption and 8.869 mtoe of expected energy savings. This cycle will deepen the scheme by the inclusion of more units from the existing sectors. There are 89 new DCs that have been added from the  existing eight sectors. Further, the scope of the scheme has been broadened by including units from three new sectors – refineries, railways and electricity discoms. A total of 84 new DCS have been added from these new sectors. While the DCs selected in Cycle 1 accounted for a 36 per cent share in the total energy consumption (2009-10 level), those selected in Cycle 2 have a 50 per cent share.

The salient features of Cycle 1 have been retained for this cycle. These include:

However, the notified timeline for monitoring, reporting and verification has been extended.

The government notified the revised PAT rules in March 2016. As far as trading of ESCerts is concerned, the Central Electricity Regulatory Commission (CERC) has come out with draft regulations on Terms and Conditions for Exchange of Energy Saving Certificates. As per the draft regulations, ESCerts will be exchanged on the power exchanges, regulated by the commission. The function of registry of ESCerts trading will be performed by the Power System Operation Corporation. The company has also been entrusted with the task of preparing a draft procedure for ESCert trading.

The actual trading of ESCerts is expected to begin during 2016-17. However, the banking of ESCerts will be allowed until the next PAT cycle. The power exchanges will submit their business rules for approval to the CERC, in order to commence ESCert trading. The business rules will cover the price discovery mechanism; contract specifications for ESCerts; risk management mechanism; trading timelines; delivery, surveillance, and clearing and settlement; and member and client categories. 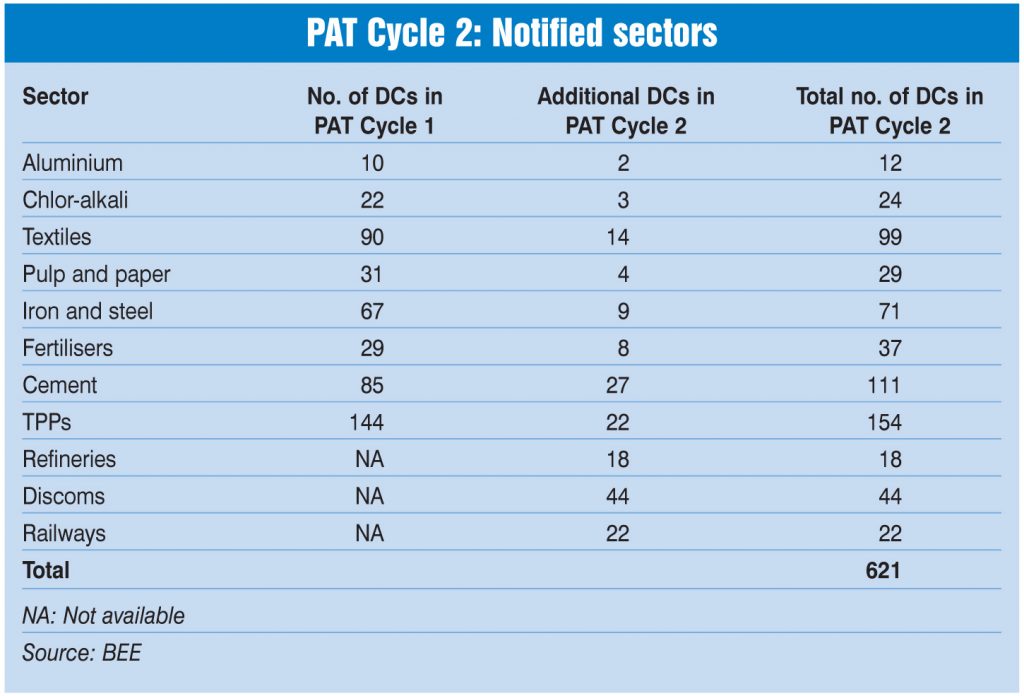 Reportedly, the BEE has proposed that ESCerts should have no floor or forbearance price, and that pricing should be determined purely through the demand and supply of ESCerts. Based on the initial results of Cycle 1, it is expected that there will be significant oversupply of ESCerts, which could potentially lead to low prices. However, since banking is allowed until the next PAT cycle, companies may choose to hold on to the certificates rather than selling them when they are trading at low prices.

The government has identified lighting as another key focus area for energy efficiency. To this end, in January 2015, it launched  a scheme called the Domestic Efficient Lighting Programme (later renamed as Unnat Jyoti by Affordable LEDs for All [UJALA]). The key driver of the scheme was the fact that lighting accounts for about 20 per cent of the total power consumption in India. Most of the domestic and public lighting needs are met by traditional incandescent lamps, which are very inefficient. The government’s target is to replace all the 770 million incandescent bulbs installed in the country with LED bulbs. It is estimated that this move would lead to a reduction of almost 20,000 MW load, energy savings of 100 billion kWh and greenhouse gas reduction of 80 mt every year. LED bulbs consume half the energy as that consumed by compact fluorescent lamps (CFLs) and one-tenth as that of incandescent bulbs.

mand  owing to the distribution of the bulbs is estimated at 2,783 MW. This has led to a reduction of 30,848 tonnes of CO2 per day. The government expects that sustained efforts under UJALA, coupled with industry support, will help achieve its objective of replacing 770 million inefficient bulbs by March 2019, leading to savings worth Rs 400 million.

The UJALA scheme has played a significant role in bringing down the  price of LED bulbs. As per a tweet by Piyush Goyal, minister of state (independent charge) for power, coal and new and renewable energy, “The procurement price of LED bulbs has reduced by 83 per cent from Rs 310 to Rs 54.90 in two years.” The affordability of LED bulbs has led to the increased adoption of these bulbs by households. 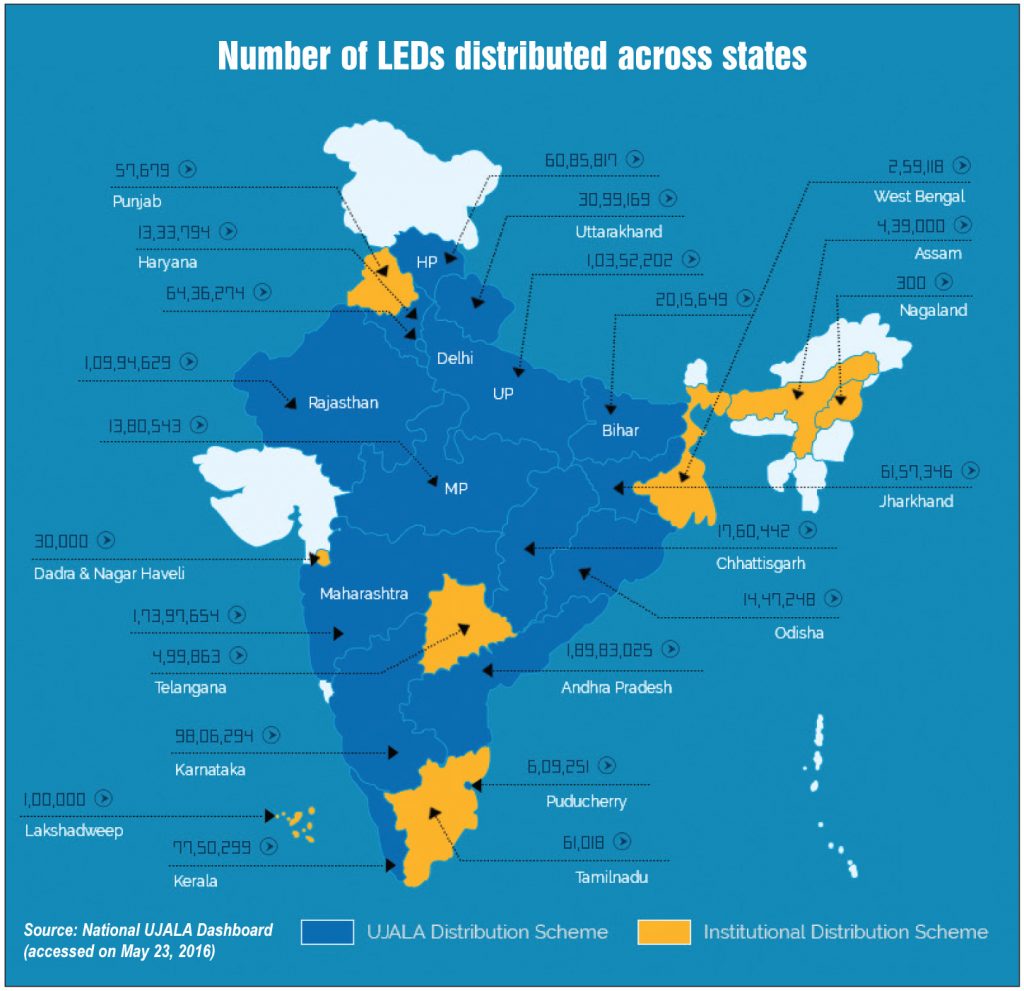 Under the NEEAPP, farmers can replace their inefficient pumps with the new BEE star-rated energy efficient agricultural pump sets free of cost. In addition, there is a provision for a smart control panel and a SIM card with these pumps. This facility will enable farmers to remotely control these pumps using their mobile phones from anywhere. EESL is expected to distribute 200,000 BEE star-rated pump sets to farmers under this programme, which will lead to 30 per cent of energy savings by 2019. This translates into annual savings of around Rs 200 billion on agricultural subsidies or a saving of 50 billion units of energy every year.

Under the NEEFP, the government will distribute BEE five-star-rated ceiling fans of 50 W each to consumers. Two energy efficient fans will be provided to each consumer at an equated monthly instalment (EMI) of Rs 60 per month, which will be added to their electricity bill for two years. The consumer can also purchase the fan by making an upfront payment of Rs 1,250. It is envisaged that by using these energy efficient fans, consumers can save Rs 700-Rs 730 per year on their electricity bills. Therefore, their cost will be recovered in less than two years. Uttar Pradesh is the second state in the country to adopt this programme.

The results of PAT Cycle 1 have been very encouraging and it seems that the overall energy saving targets envisaged under the scheme have been met. However, the trading of ESCerts, which the industry has been long waiting for, is yet to take off. ESCerts are expected to be a key incentive for industries that have achieved or surpassed their energy efficiency targets. However, it remains to be seen how efficiently the market will function in case of a disparity between the demand and supply of ESCerts. As has been proved by the renewable energy certificate market, lack of enforcement impacts the success of the entire trading process.

The government’s LED bulb distribution programme has been quite successful and has set new benchmarks. Consumer uptake of LEDs has increased owing to their affordability. While the government’s ambitious target could put the country well on course on its emission reduction trajectory, it remains to be seen whether its energy efficient agricultural pumps and fans initiatives deliver the desired results.

In sum, with extensive policy support, the country is well placed to achieve its energy efficiency targets while not compromising on its development goals. However, the momentum of the policy programmes needs to be maintained in order to achieve long-term sustainability.