Utilities in India are stuck in a vicious cycle of high losses and low investments. Mounting losses inhibit utilities from making investments in network strengthening, thus widening the revenue gap. According to the Ministry of Power, the accumulated losses of distribution utilities stood at about Rs 3,800 billion as of March 2015, while the outstanding debt was Rs 4,300 billion. The situation is particularly dismal in the public sector, where aggregate technical and commercial (AT&C) losses continue to remain over 25 per cent for a number of utilities.

Effective metering holds the key to the financial turnaround of these utilities. It represents a low-cost solution to improve the revenue flow, given the current scenario – that is inadequate tariff revisions and the limited ability of discoms to make mega network investments. Efficient metering not only results in accurate measurement and billing of the electricity supplied to consumers, but also forms the basis of energy audits, leakage analysis, use of analytics and overall demand-side management.

Indian utilities have adopted a number of tools and techniques for improving the metering scenario over the past decade. Metering has received a major push under various central government programmes such as the Integrated Power Development Scheme, which has subsumed the Restructured Accelerated Power Development and Reforms Programme (R-APDRP) and the Deendayal Upadhyaya Gram Jyoti Yojana.

As a result, the number of energy meters installed in the country is estimated to have increased at a high compound annual growth rate (CAGR) of over 12 per cent in the past five years, while the number of distribution transformer (DT) meters has increased at 5-6 per cent. Most utilities have managed to achieve over 90 per cent metering coverage for the industrial and domestic consumer segments, as well as at the feeder level. However, the situation remains grim for the agricultural consumer category and at the DT level, with the majority of the discoms reporting metering coverage of less than 50 per cent.

As for technology, almost all utilities have undertaken major drives to replace electromechanical meters with electrostatic meters, primarily to check meter tampering. While the transition is yet to be completed, all the new meters being installed are either electronic or based on advanced technology. There is also greater deployment of specific-use devices such as net, prepaid, time-of-day (ToD) and kVAh meters. The current focus is on the development of a smart metering infrastructure that can offer a range of intelligent functions such as automated meter reading (AMR), on-demand reading, communication management, and bill scheduling. Utilities have also started deploying advanced metering infrastructure (AMI) systems on a pilot basis in select locations.

The Bangalore Electric Supply Company (BESCOM) is among the progressive public sector utilities in India. The utility has been making sustained investments in strengthening the network, which has resulted in a decrease in AT&C losses from 22.7 per cent in 2010-11 to 16.8 per cent in 2014-15.

Efficient and effective metering and billing has played a key role in achieving this reduction. The utility has metered all its 7.16 million domestic consumers, 180,740 industrial consumers and 4,222 feeders (as of March 2015). Over the past decade (2005-06 to 2014-15), metered consumption has increased at a CAGR of 9.4 per cent. In 2014-15, the utility invested nearly Rs 1.93 billion in its metering programme, which was 103 per cent higher than the proposed amount.

As of September 2015, the utility has replaced 95.3 per cent of single-phase and 93.1 per cent of three-phase electromechanical meters with static meters across the 24 towns covered under Part B of the R-APDRP. BESCOM was one of the first utilities in the country to introduce thread-through-type composite meter housing boxes for DT meters. The utility has switched over to a three-element metering system from a two-element system, and replaced the three-phase three-wire system with a four-phase four-wire system. In doing so, BESCOM has replaced CT/PT operated energy meters of 0.5 class accuracy with 0.2 class accuracy meters, while the Central Electricity Authority stipulates that an accuracy of 0.5 class is sufficient.

The utility has implemented ToD metering for all high tension (HT) installations of more than 500 kVA. It is currently rolling out prepaid meters in an attempt to plug revenue leakages and improve collection efficiency. State regulations stipulate that all temporary electricity connections in Karnataka must be through prepaid energy meters. As part of a pilot project, BESCOM has installed 3,525 smart card-based prepaid meters in Indiranagar division. The meters were supplied by Supermax Components and the software was provided by Mexico-based IUSA. These meters were customised to meet specific utility needs. It is estimated that if the utility implements prepaid metering across the city, it could save as much as Rs 150 million in meter reading costs.

BESCOM is also rolling out net meters for grid-connected rooftop solar photovoltaic (PV) systems. The state solar power policy aims to set up rooftop solar PV systems aggregating 100 MW by 2017-18. The net metering facility is also being made available in the rural areas under the Surya Raitha scheme. The Rs 230 million project entails the replacement of existing irrigation pump sets with efficient solar power-based pump sets based on the net metering concept.

So far, the utility has rolled out 67 installations in rooftop solar PV with the net metering concept, by installing bidirectional meters. The utility is also providing smart meters to all consumer categories in the low tension segment in a phased manner, beginning with commercial consumers, as a part of the AMR and AMI deployment project.

A key area where the discom is lacking is metering coverage of agricultural consumers and at the DT level. As of March 2015, only 8.6 per cent of the agricultural consumers and about 52.05 per cent of the DTs were metered. BESCOM has set a target of metering all DTs in 2016-17; however, significant improvement in metering coverage of irrigation pump sets in rural areas may not be achieved due to protests by local farmers.

Since the utility’s electrostatic meters do not have inbuilt radio frequency (RF) gadgets, the utility is planning to retrofit the existing meters with external RF gadgets for retrieving the data, thus  building centralised meter reading (CMR) compatibility. BESCOM is also planning to undertake consumer billing through optical ports of electrostatic meters as well as deploying a wireless monitoring system for AMR. These projects are currently at the initial stages of implementation.

Significant investments are being planned to continue moving forward. As per the utility’s business plan for 2017-21, Rs 881.7 million will be invested in the replacement of electromechanical and faulty meters and the installation of DT meters, modems, boundary meters (in the R-APDRP area), smart meters, etc. 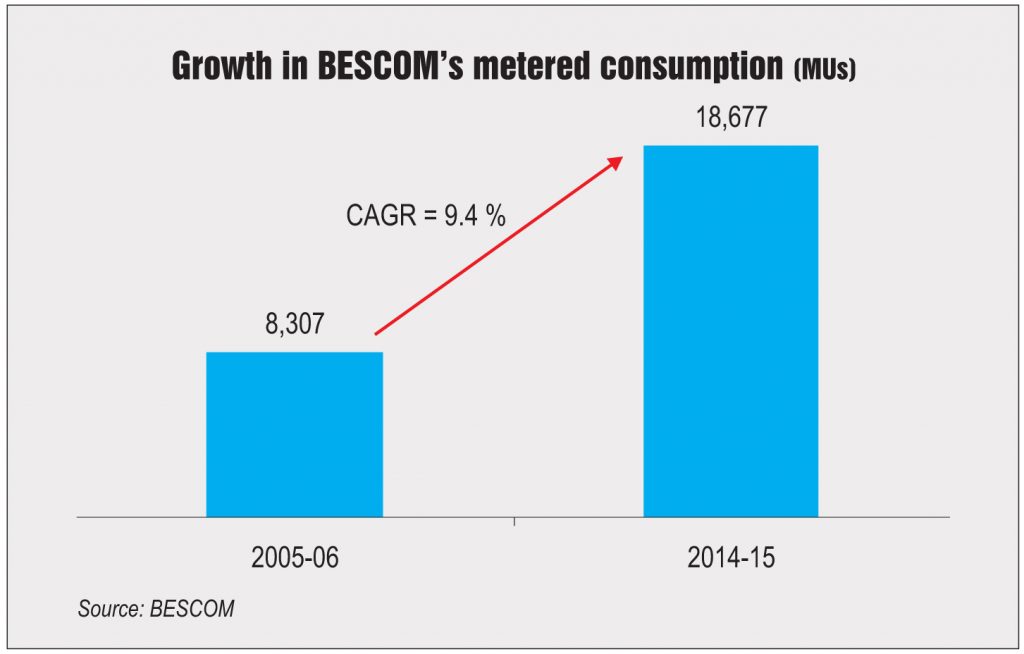 The operational performance of Southern Power Distribution Company of Andhra Pradesh Limited (APSPDCL) stands out since the utility has been reporting one of the lowest network losses in the country. During 2014-15, APSPDCL’s AT&C losses stood at 12.6 per cent, while  distribution losses stood at 10.31 per cent. The low loss levels are partly attributed to the extensive metering initiatives taken by the utility over the years, particularly in urban areas.

APSPDCL has achieved 100 per cent metering coverage for its 7.81 million domestic consumers and 112,696 industrial consumers. Metering at the utility’s 6,700 feeders is nearing completion. Over 90 per cent of the electromechanical meters in urban areas have been replaced with electronic meters. The utility has also implemented ToD and AMR systems in its network areas.

AMR systems are being implemented for feeders (including agricultural), DTs, and LT and HT industrial consumers to improve the power supply conditions and load management. In rural areas, communication has not been a major barrier as AMR is being implemented at the substation level. In addition, billing is being undertaken through IrDA ports, which have replaced all the old meters, and hence the utility is steadily eliminating manual interventions in the billing process and minimising the scope of human error.

To check meter tampering, APSPDCL has implemented a monitoring and tracing system, which detects irregularities in consumption and billing patterns. The discom has also implemented a high voltage distribution system to upgrade its network in order to address the problems of low voltages and distribution losses. The utility has also implemented a geographic information system for consumer indexing and asset mapping. APSPDCL has also extended the net metering facility to solar rooftop and small PV power plants. The facility is allowed for all single-phase and three-phase consumers.

Going forward, APSPDCL has set a target of reducing its network losses to less than 9 per cent through increased metered sales and the implementation of other loss reducing measures. As such, all connections and DTs are being released with meters. However, the utility still needs to develop a clear business plan to meter all agricultural services.

The AT&C losses of Uttar Haryana Bijli Vitran Nigam Limited (UHBVN) for 2014-15 stand higher than the national average of about 28.4 per cent. However, this is a significant decline from the 43.7 per cent reported about a decade ago in 2004-05. Over the past few years, UHBVN has been focusing on reducing the non-technical losses, which account for a major share of the overall losses.

For this, the utility has been regularising illegal connections, checking power theft, and replacing faulty and tampered meters, both in urban and rural areas. To prevent tampering, meters are being installed in steel meter cupboards. Moreover, UHBVN has undertaken a major drive to relocate energy meters outside the consumer premises. The meters have been shifted to the outer wall of houses in urban areas, while in rural areas these have been shifted into pillar boxes.

To regularise connections, UHBVN has launched voluntary disclosure and theft informer schemes. The utility has also intensified campaigns to keep a check on power theft on consumer premises. The online lodging of vigilance activities has been made mandatory.

On the technology front, the utility is replacing electromechanical meters with static meters. So far, more than 3.7 million electromechanical meters have been replaced and there are plans to replace the remaining during the current year. Another technological initiative taken by the utility is the deployment of ToD meters. UHBVN is also offering prepaid and smart meters for government institutions as well as starting to provide bidirectional meters for rooftop solar power plants. However, this is yet to be fully operationalised.

UHBVN is currently engaged in implementing a smart grid pilot project in the Panipat city subdivision. From about 31,914 consumers initially, the scope of the project has been reduced to 11,500 consumers. The project entails the deployment of AMI as well as supervisory control and data acquisition, distribution management, peak load management and outage management systems for industrial and residential consumers. The project is being executed under a grant provided by the Japanese government through the New Energy and Industry Technology Development Organisation, which has awarded the project to a consortium of Japanese companies led by Fuji Electric.

Utilities stand to benefit significantly from advanced metering practices, since metering and billing loopholes account for a large part of their commercial losses. Most utilities in the country are adopting new metering technologies and upgrading meter

reading and billing methodologies in order to improve collection efficiencies. Over the past decade, the focus has been on shifting to electrostatic meters as well as on meter sealing to check pilferage. Utilities are now adopting new metering functionalities such as bidirectional and prepaid to meet regulatory and policy commitments.

Going forward, more and more utilities are looking to develop smart metering infrastructure. The transition to a smart structure is likely to take a few years as such deployments are being undertaken in a phased manner. While there are significant variations in the extent of metering technology adoption, depending on management philosophy and investment capabilities, utilities are committed to making progress given the clear commercial benefits.