Need for the plan

The Electricity Act, 2003 opened up the previously constrained electricity market, which was characterised by long-term power purchase agreements and the inability of discoms and consumers to choose their suppliers. Besides delicensing generation and removing controls on captive generation, the act provided non-discriminatory open access to the transmission and distribution segment. However, the participation of discoms in the bidding process is not satisfactory and results in suboptimal utilisation in some parts of the grid. Therefore, it is important to frame an optimum transmission plan, which will decide the course of transmission capacity development to support the increased energy demand and generation capacity.

In addition, the report has estimated peak export demand from the neighbouring South Asian Association for Regional Cooperation (SAARC) countries. The total peak load demand of these countries to be served from the Indian grid has been estimated at 237,000 MW, 352,000 MW, 511,000 MW and 686,000 MW for the Thirteenth, Fourteenth, Fifteenth and Sixteenth Plan periods respectively.

With the Ministry of New and Renewable Energy’s ambitious target of installing 175 MW of renewable energy capacity by 2022, the fuel mix is expected to undergo a major change. As per the plan, at the end of 2026-27, around 52 per cent of the total generation capacity will be thermal followed by renewable (33 per cent), hydropower, including 24.3 GW of installed capacity from Nepal and Bhutan (12 per cent), and nuclear energy (3 per cent). 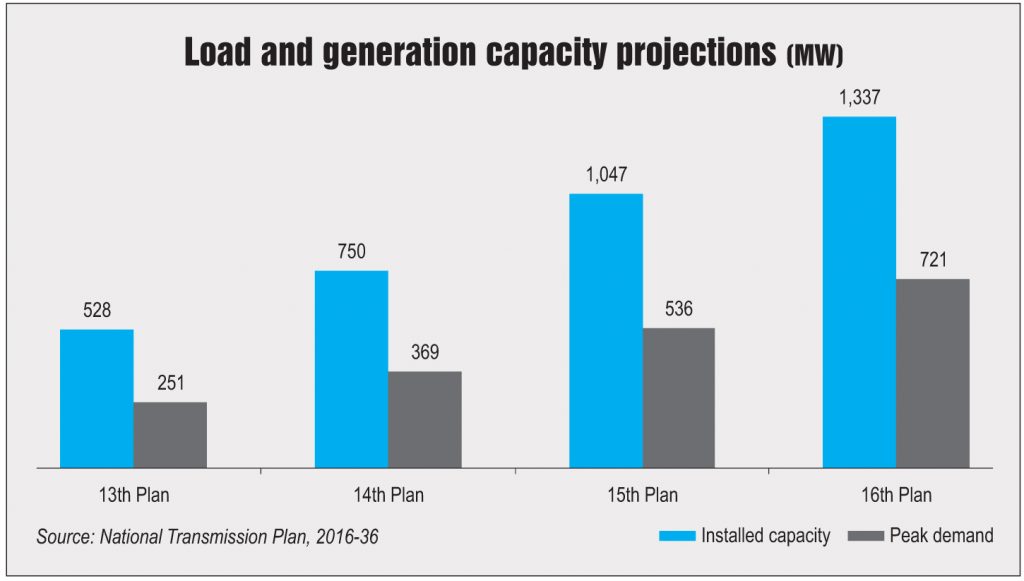 As per long-term projections, the generation capacity is expected to increase to around 1,047 GW during the Fifteenth Plan period and 1,337 GW over the Sixteenth Plan period. The projections reflect that the generation capacity will grow at a CAGR of 9.5 per cent during the period 2021-36, mainly driven by the increase in renewable energy capacity. However, due to their low plant load factor of about 20 per cent and non-availability during peak hours (6 to 9 p.m.), renewable energy projects will  make a lower contribution towards meeting the overall energy demand.

The transmission corridor capacity requirements have been worked out based on advance estimates of peak load demand and preliminary assessments of region-wise generation addition over the next 20 years. A load generation balance analysis for 2021-22 has indicated that the northern and southern regions would be required to import power and the remaining (western, eastern, north-eastern, Bhutan and Bangladesh) regions would be in a position to export power. To cater to this requirement, a number of interregional transmission corridors have been planned. The interregional transmission capacity expected to be installed by 2021-22 is estimated at 91,250 MW. These high capacity transmission corridors are at various stages of implementation and most of these are likely to be commissioned by 2021-22. The total transmission capacity addition between 2015 and 2022 is estimated at 35,900 MW. Of this, around 19,000 MW is expected to be installed during 2017-22. The maximum addition is planned in the west-south region (76 per cent) followed by the west-north (16 per cent) and east-north (8 per cent) regions. 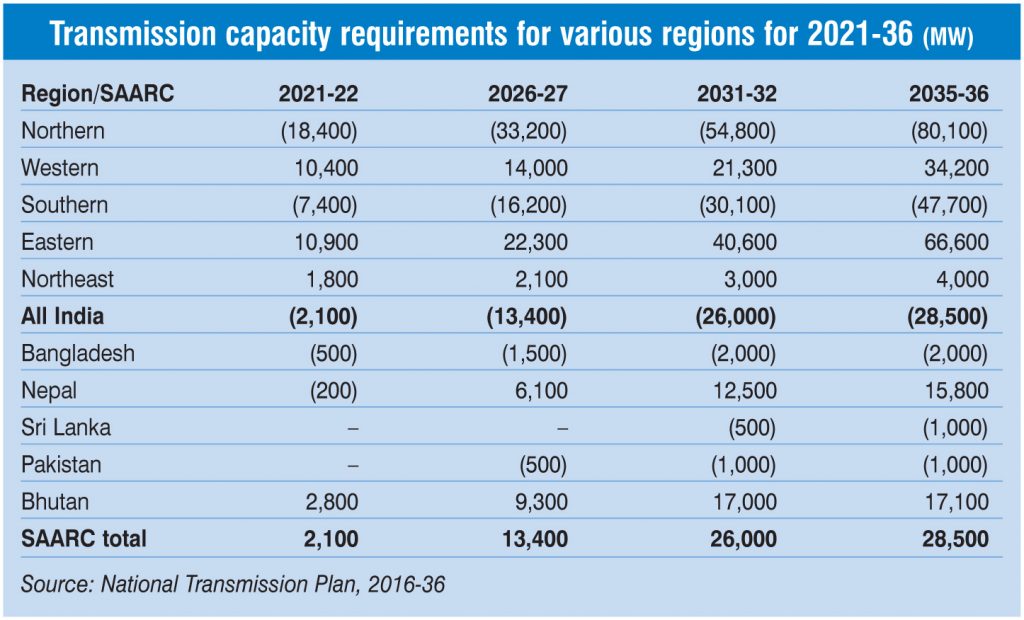 A region-wise analysis shows that major transmission corridors need to be set up in the northern and southern regions. To reduce the burden on the transmission system, there is a need to develop more hydro generation capacity in these regions.

Moreover, the state transmission utilities are required to undertake planning and implementation of intra-state systems and their interconnection with the interstate transmission system as scheduled by various transmission schemes so that the planned generation reaches the target beneficiaries.

There is a need to review the existing methods and adopt a different approach to maintain the load generation balance of the grid and manage the large renewable energy capacity addition proposed for the future.