The Indian energy sector is set to undergo a transformation. Consistent efforts are being made to increase the share of renewable energy in the fuel mix to about 38 per cent by 2022; this translates into an installed renewable energy capacity of 175 GW. Of this, a major portion (about 100 GW) will come from solar-based installations.

Given the policy and regulatory support provided to solar power, this segment has attracted attention from all quarters. The entry of a large number of players has increased competition, which, in turn, has driven down solar tariffs to an all-time low. Industry experts expect solar power tariffs to reach grid parity soon.

A key emerging trend is the increasing role of the states in driving growth in the solar space. The market, which was earlier driven largely by the Jawaharlal Nehru National Solar Mission and the Gujarat Solar Policy, 2009 is now led by over a dozen state solar policies. States such as Madhya Pradesh, Andhra Pradesh, Tamil Nadu, Punjab, Maharashtra, Uttar Pradesh and Telangana have come to the forefront, promoting capacity addition through state-centric policies. Most of them have started aligning their policies and targets to the central government’s schemes and targets.

In the past few years, the size of tenders issued by states has increased significantly. In 2014-15, the maximum capacity of state-level tenders across Karnataka, Telangana and Andhra Pradesh was 500 MW, whereas in 2015-16, it stood at 2,000 MW in Telangana. Other large-capacity tenders were a 1,200 MW tender each in Karnataka and Jharkhand, and a 750 MW tender in Madhya Pradesh.

Haryana was the first state to announce a solar policy in 2016, the Haryana Solar Power Policy, 2016. The new policy, which was released in March this year, supersedes the Haryana Solar Power Policy, 2014, which was to remain in effect till March 31, 2016. The new policy aims to increase the state’s involvement in promoting solar power development. It seeks to promote decentralised solar off-grid applications and ground-mounted projects in solar parks, canal tops/banks, panchayat land, rooftops, etc. It also provides various incentives to encourage private sector investments. These include the provision of industrial status to projects; exemption from change of land use approval, electricity duty and cess; freewheeling and banking facilities; and exemption from transmission and distribution and cross-subsidy surcharges. Besides, the state government has decided to purchase solar power over and above the renewable purchase obligation (RPO) target.

Of the government’s ambitious target of installing 100 GW of solar energy capacity, 40 GW will be contributed by rooftop plants, which are attracting interest owing to their competitive costs. To tap the potential of this segment, states are in the process of formulating supportive policies. Steps are also being taken to put in place net metering regulations for operating rooftop solar projects.

Many states have already announced rooftop solar policies. As of February 2016, states such as Punjab, Madhya Pradesh and Uttarakhand have released separate tenders for rooftop solar projects.

With regard to net metering, states such as Tamil Nadu, Andhra Pradesh, Uttarakhand and Punjab came out with relevant regulations in 2013 and 2014. Over a period of three years, almost 26 states and union territories have released policies and regulations to operationalise net metering. However, owing to various challenges at the utility level, their implementation has been slow. 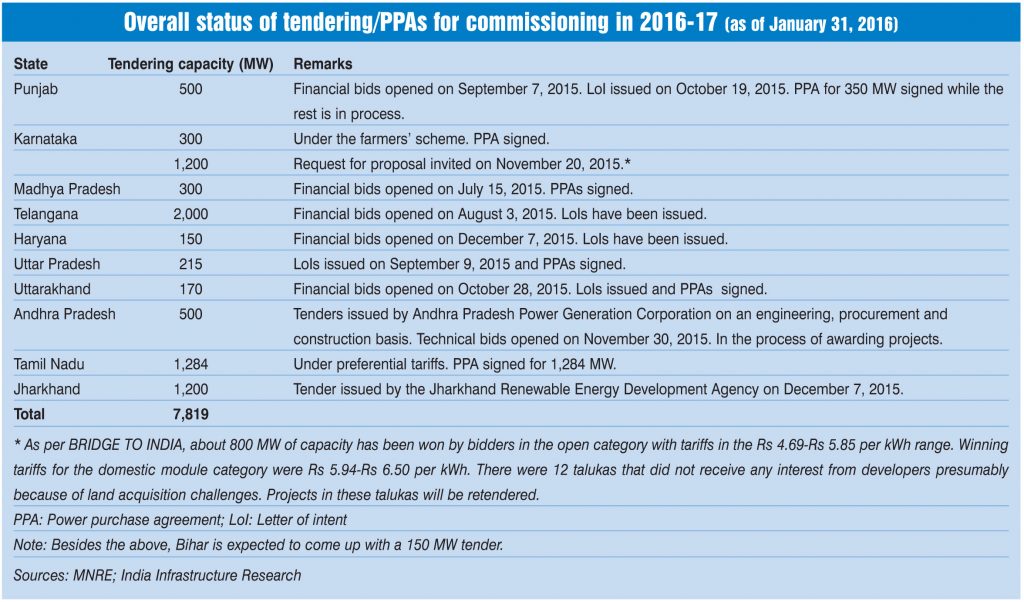 As per the Power for All documents released by various states, the cumulative capacity addition between 2016-17 and 2018-19 is estimated at 26,025 MW across Andhra Pradesh, Gujarat, Karnataka, Maharashtra, Punjab, Rajasthan and Telangana. The highest capacity addition (6,000 MW) is expected in Rajasthan, followed by Telangana (5,466 MW) and Maharashtra (4,617 MW). 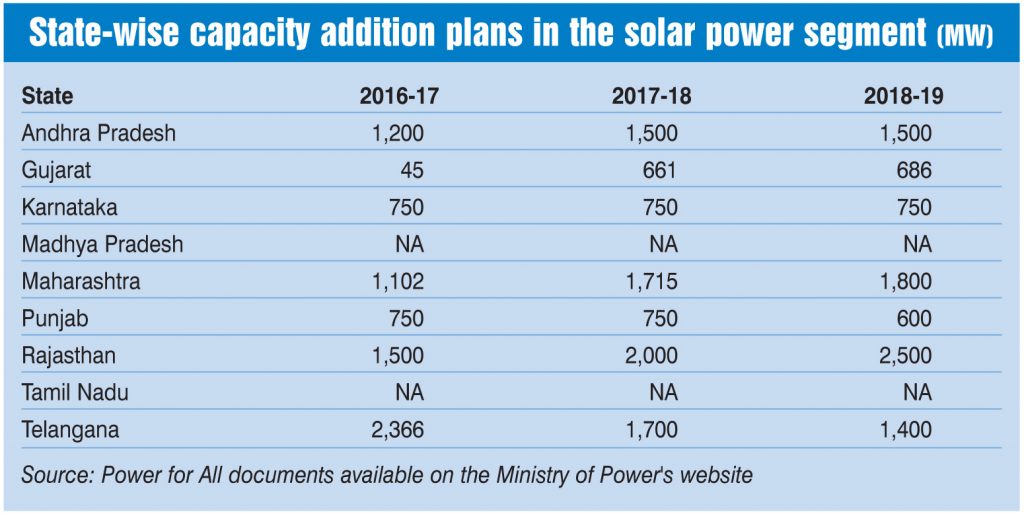 To achieve the government’s solar target, land needs to be acquired on a large scale. However, there are difficulties in acquiring land with specific radiation requirements in a short time period of less than 12 months. The upcoming solar parks hold immense potential in resolving this issue by making facilities such as land, clearances and infrastructure easily available to the developer.

Moreover, developers in most states are losing revenue because the evacuation infrastructure has not been developed in a timely manner. Therefore, the state governments need to develop the required evacuation infrastructure based on their solar potential. In addition, the state electricity regulatory commissions need to specify long-term solar RPO targets and ensure that these targets are complied with by all obligated entities.

Going ahead, the states need to maintain policy and regulatory continuity to ensure sustained participation in the solar power segment.