Set up in 2000, Eastern Power Distribution Company of Andhra Pradesh Limited (APEPDCL) caters to the power needs of the eastern region of Andhra Pradesh and is one of the strongest performing state discoms operationally. In 2015-16, APEPDCL’s aggregate technical and commercial (AT&C) losses stood at an impressive 5.5 per cent, as compared to 6.87 per cent registered in the previous year.

The company was able to lower its losses largely owing to network augmentation, electronic metering, deployment of star-rated distribution transformers (DTRs) and, importantly, the use of comprehensive IT applications. According to R. Mutyala Raju, chairman and managing director, APEPDCL, “We believed that a turnaround can only be achieved through continuous improvements and innovative strategies in the key functions of metering, billing and collection, and effective governance in loss control.”

As of March 2015, APEPDCL’s consumer base stood at 5.1 million. Around 85.8 per cent of its consumers came under the domestic category, followed by commercial consumers (7.9 per cent), agricultural consumers (4 per cent), others (1.7 per cent) and industrial consumers (0.7 per cent). It sold 15,534 MUs of energy to all categories of consumers during 2015-16. Domestic consumers account for the largest share of the company’s total energy sales.

In order to reduce its AT&C losses, the company took some key initiatives such as the provision of BEE five-star rated DTRs since 2011 for all its new projects. It has also replaced over 96 per cent of its electromechanical meters with higher accuracy electronic meters. Moreover, it has implemented high voltage distribution system (HVDS) in a phased manner since 2003-04 to improve tail-end voltages and the high tension (HT)-LT ratio.

Further, the company has adopted feeder-centric energy audits for reviewing, analysing and reducing losses. It has also introduced KVAH-based billing to reduce the load on the network and improve the voltage  profile. In addition, spot billing is being carried out for LT consumers through handheld devices.

Besides, for efficient customer service management, APEPDCL has adopted various measures including the setting up of a centralised call centre, provision of online payment options and the installation of anytime payment machines. The company launched a mobile application for its consumers in October 2015 and more than 69,000 consumers have downloaded it since then. Users are able to pay electricity bills from their mobile phones, receive bill reminders, get to know the power supply situation of their area, etc. “APEPDCL is a pioneer in providing next-generation customer services, with a number of new IT initiatives,” states Raju. 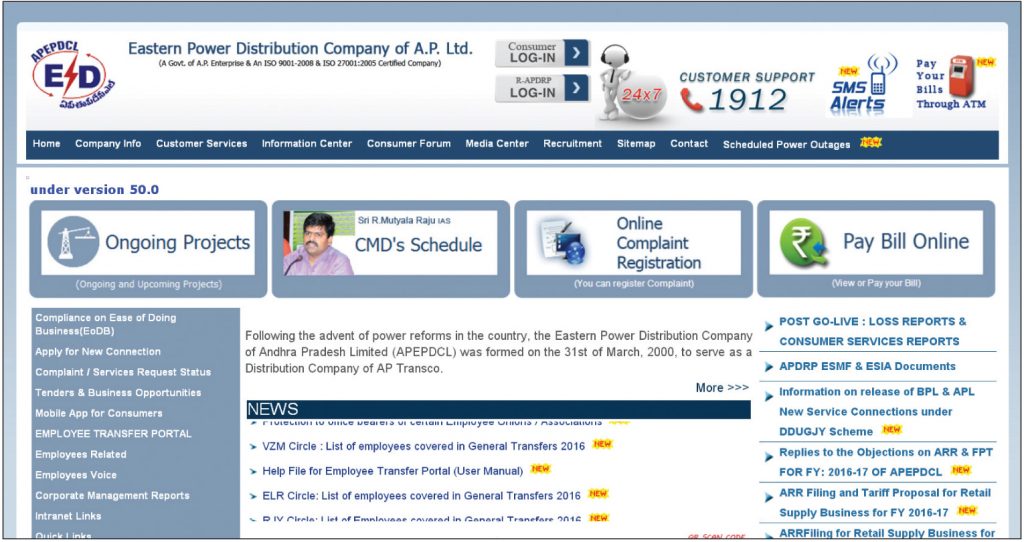 APEPDCL is executing various projects and programmes for augmenting its distribution infrastructure and improving its operational performance. Under Part A of the Restructured Accelerated Power Development and Reforms Programme (R-APDRP), the Power Finance Corporation (PFC) has sanctioned Rs 131.6 million for the implementation of the supervisory control and data acquisition (SCADA) system in Visakhapatnam. Under Part B, which focuses on network strengthening, PFC has sanctioned Rs 585.1 million for nine towns – Itchapuram, Palasa-Kasibugga, Amadalavalasa, Pithapuram, RC Puram, Mandapeta, Amalapura, Eluru and Bhimavaram. Of these, works have been completed in three towns. Apart from this, the Rural Electrification Corporation (REC) has sanctioned a Rs 1.37 billion HVDS project under the National Electricity Fund for east Godavari and west Godavari districts.

Meanwhile, under the new schemes – Deendayal Upadhyaya Gram Jyoti Yojana (DDUGJY) and the Integrated Power Development Scheme (IPDS) APEPDCL has taken up works on top priority. Under the DDUGJY,  work related to rural electrification was awarded on a war footing basis to duly comply with the state government’s ambitious target of electrification of all rural households by May 31, 2016. Accordingly, the electrification works which started in December 2015 were completed in time.

APEPDCL has adopted multi-pronged strategies, which include appointing nodal officers at the village level for closely monitoring the works; spot registration of applications; regular meetings with district collectors and local public representatives; conducting workshops and awareness campaigns, as well as creating WhatsApp groups for field level officers. Meanwhile, under the IPDS, APEPDCL has received a sanction of Rs 3 billion to execute works such as the erection of new 33 kV substations, network strengthening, metering and rooftop solar in 29 towns across five districts – Vizianagaram, Visakhapatnam, west Godavari, Srikakulam and east Godavari.

As per the Andhra Pradesh Solar Power Policy, 2015, APEPDCL has been playing an integral role in the development of solar energy, and has supported the gross and net metering options. The company has installed a 10 kW solar rooftop system at its corporate office building for demonstration purposes. So far, it has synchronised 102 solar rooftop systems, aggregating 1.63 MW, with the grid. The company is also implementing the solar pump set scheme under which around 1,791 pumps have been installed for irrigation purposes.

Under the Domestic Efficient Lighting Programme, APEPDCL has achieved 95 per cent of its target of distributing 7.9 million LED bulbs. The company has also initiated an agricultural demand side management-based project under the energy services company (ESCO) model. It aims to replace 2,496 inefficient agricultural pump sets with energy efficient pumps.

APEPDCL is undertaking a smart metering pilot project in Visakhapatnam. The project entails the implementation of smart metering solutions along with the deployment of smart grid infrastructure for an 11 kV feeder and 27 DTRs. So far, works for two DTRs have been completed.

In addition, APEPDCL has developed an interface based on the central government’s “Vidyut PRAVAH” application for discoms in Andhra Pradesh to provide transparency in the system and make the power utilities more accountable. The utility has also developed an outage management system dashboard, which is a web-based application capable of generating meaningful reports to monitor outages, loads and feeder interruptions.

The company has taken many steps to improve its organisational efficiency. These include the setting up of e-stores, which aim at replacing paper requisitions with e-requisitions; e-office, which expedites the documentation process; and a vehicle-tracking system, which is an IT-enabled system developed to streamline the process of DTR failure replacements. Apart from this, many applications have been developed to facilitate the day-to-day operations of department personnel.

The company is planning to strengthen its distribution network and infrastructure by investing in HVDS, smart metering, SCADA, underground cabling and covered conductors, capacity building, as well as infrastructure development through the erection of new substations and transmission lines. To this end, an amount of Rs 10.32 billion has been allocated to APEPDCL under the Power for All scheme, with the World Bank’s financial assistance.

The company is also executing the Andhra Pradesh Disaster Recovery Project. The Rs 7.2 billion project, which is part-funded by the World Bank, aims to restore the damage caused by the 2014 cyclone in the state as well as help improve the resilience of the state’s infrastructure in the event of future disasters.

APEPDCL proposes to undertake a capital expenditure of Rs 15.87 billion during the period 2016-17 to 2018-19. The capex proposed will be met either from the grant component of the government’s schemes, or the internal funds of the discom or, if necessary, by raising loans from power finance companies.

According to the company, maintaining a healthy financial status is quite challenging. During 2014-15, APEPDCL’s total revenue stood at Rs 80.23 billion, while its net losses stood at Rs 7.22 billion. The company has joined the Ujwal Discom Assurance Yojana, which  is a step in the right direction. Further, the company notes that right-of-way issues are leading to delays in projects.  However, the main challenge facing the company is to manage customer expectations. “In the digitisation era, customers not only expect to receive 24×7 power supply but also faster redressal of complaints and interruptions. Therefore, ensuring quality and uninterrupted power supply is a major challenge,” says Raju.

In spite of the bottlenecks, with a slew of projects proposed under various reforms such as IPDS, R-APDRP and Power for All over the next few years, it is expected that APEPDCL would be better equipped to overcome these challenges.