The power sector in India has been growing at a healthy pace supported by various policy initiatives by the government. Generation capacity has grown at a brisk rate of over 10 per cent over the past five years, while the transmission and distribution (T&D) network has witnessed a moderate growth of around 4 per cent. This has translated into a growing demand for robust power system equipment such as switchgear in the country.

Broadly, a switchgear is a combination of components such as switches, fuses and circuit breakers that are used to control, protect and isolate an electrical equipment to enable continuous and reliable supply of electricity. The use of switchgear helps in protecting against situations of overload, short circuit, insulation failure, etc.

The switchgear market consists of a variety of products such as circuit breakers, fuses, relays, contactors, etc. Electric switchgear is necessary at every switching point in the electrical power system. Besides the power system, switchgear is also used in the commercial, residential and industrial sectors.

The MV and HV segments have grown in capacity over the past several years following the announcement of reform measures. However, these reforms have not been implemented in full, which has resulted in overcapacity and intense competition in the industry. The LV switchgear segment, on the other hand, has been growing steadily, albeit slowly.

Historically, air-insulated switchgear (AIS) has been the most commonly used switchgear in India due to its low price.  However, GIS is now gaining popularity and is emerging as the preferred technology in India, especially in the transmission segment. Its compact and encapsulated structure makes it ideal for areas with space constraints. This kind of switchgear is also suitable for use in locations with severe weather conditions (high temperatures and high altitudes) and in industrial environments.

Given the government’s reform initiatives, the switchgear market is likely to continue on its growth trajectory. Programmes such as Power for All, Make in India, the Integrated Power Development Scheme, and the Deendayal Upadhyaya Gram Jyoti Yojana are expected to augment the demand for T&D equipment, which will, in turn, create growth opportunities for electrical equipment manufacturers, including switchgear manufacturers. Reforms such as the introduction of competition and the separation of the supply and wires businesses will further incentivise network improvements. 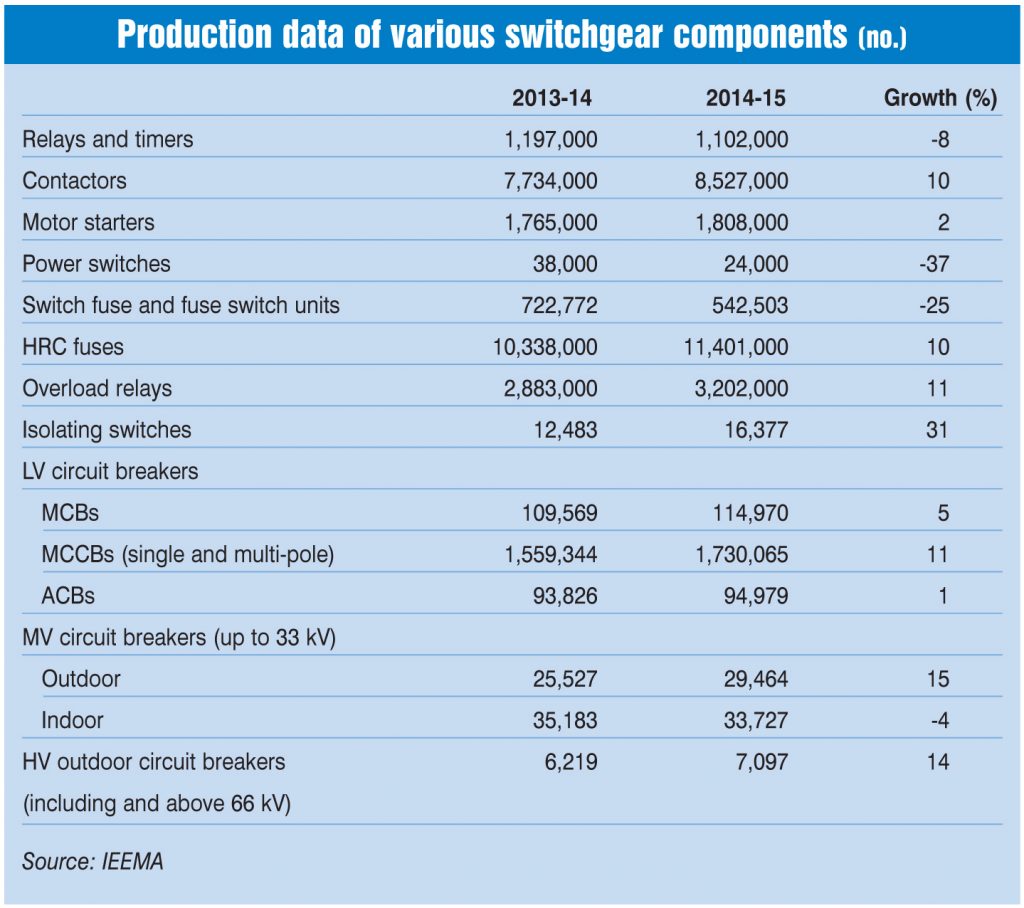 Going forward, network investments are needed to support the country’s electricity demand, projected at a compound annual growth rate of 7.2 per cent during 2016-22 by the CEA. The central government has also proposed investments of $50 billion in the transmission segment over the next five years.

All these plans and efforts are expected to lead to an increased demand for switchgear. Further, the government’s ambitious renewable energy targets for 2022 will support market growth. The MCCB and MCB markets are expected to benefit considerably from the alternative energy expansion.

A number of power plants in India are nearing the end of their service life and thus require overhauling and modernisation. This includes replacement of the existing transformers and switchgear. Power plant modernisation and refurbishment are expected to further support the growth of the switchgear market. Meanwhile, there are plans to segregate the power supply and the wires business in the distribution segment. This move, if it comes through, will open up new avenues for the power equipment sector. Further, the expansion of key industries (cement, steel, petrochemicals, etc.) and infrastructure sectors like telecom, railways, airports and ports, and the increasing emphasis on the development of smart grids and grid automation are also likely to support the switchgear market.

One of the major concerns for the domestic switchgear market is increasing imports. In 2014-15, imports of LV switchgear products increased by almost 14 per cent, from around Rs 45.22 billion in 2013-14 to Rs 51.5 billion in 2014-15. In addition, the slowdown in the power sector over the past few years and the deteriorating financial condition of the discoms has hindered the growth of the switchgear market.

However, looking ahead, the ongoing initiatives in the sector promise a positive outlook for the switchgear industry, which seems ready to meet the expected increase in the demand for various components. However, this may require the development of superior technologies and some work on standards and testing facilities.