The power system in Turkey has witnessed record expansion over the past 10 to 15 years. Sustained investments have been made across the power generation, transmission and distribution segments to cater to the rapid rise in the country’s electricity consumption. This trend of heavy investments in the electricity sector is slated to continue in the coming years, fuelled by the country’s projected economic growth. The investment will receive an additional push, given Turkey’s increasing role in the European Network of Transmission System Operators for Electricity (ENTSO-E).

Turkey stands out in the Southeast European region as it has steadily reported an average annual gross domestic product (GDP) growth of 6 per cent during the decade 2002 to 2012. Since 2013, the growth momentum has lost some steam, with GDP growing at an annual average rate of 3-4 per cent. The upswing in growth since the economic crisis of 2001, often termed as the Turkish miracle, has been a result of firm economic and political reforms targeted at ensuring its membership in the European Union (EU).

Sustained economic growth has fuelled Turkey’s electricity consumption. According to Turkey’s state transmission grid operator, Türkiye Elektrik Iletim A.S (TEIAS), electricity consumption increased at a compound annual growth rate (CAGR) of 5.4 per cent between 2005 and 2014. This was significantly higher than the average consumption growth across Europe, which stood at a CAGR of about 0.7 per cent. The rising demand was met through corresponding growth in the generation capacity. During this period, the generation capacity in the country expanded at a CAGR of 6.7 per cent.

The country’s transmission network has also undergone a substantial change over the past decade in response to the investment efforts made by TEIAS. Between 2005 and 2014, the company invested more than TRY 5.5 billion to add more than 7,800 km of transmission line length, 55,900 MVA of transformer capacity and 471 substations.

Growth momentum in the transmission segment is expected to continue in the coming years in response to the increasing power generation, demand and supply. It is estimated that during the period 2016 to 2025, electricity consumption in Turkey will increase at a CAGR of 5.4 per cent, while the overall growth in Europe will be limited to only 1.1 per cent. The high growth is expected to continue in the coming years as about 15 GW of generation capacity will be added in the country during 2016–19, given the projects under construction. In addition, 11.5 GW of generation capacity is likely to be commissioned during 2020-25.

Network investments hold the key to Turkey’s future energy strategy. The country is focusing on harnessing its renewable energy potential so as to reduce dependence on imported natural gas for power generation. The target is to increase the share of renewable energy in the total energy mix to 10 per cent by 2019. The economic viability of the proposed renewable energy projects, especially solar and geothermal, depends critically on the timely availability of evacuation facilities.

Generating additional transmission capacity will also help avoid overloading the existing lines and maintaining grid security. Turkey suffered a major blackout on April 3, 2015, which affected almost every province and was caused by the sudden shutdown of five transmission lines. The grid thus needs to be modernised by integrating information and communication technology so as to ensure uninterrupted and high quality energy supply throughout the country.

According to recent news reports, the Ministry of Energy and Natural Resources has announced that TEIAS will invest about TRY 10.2 billion between 2016 and 2019 for the development of 14 major transmission projects. Of these, four projects are expected to be completed by the end of 2017. These include the transmission line to connect the Zonguldak power project with the Izmit-Istanbul region and the Osmanca–Ada 2–Pasakoy transmission line. Another 10 projects, which are part of the company’s mid-term action plan, will be completed during 2018 and 2019.

Turkey achieved a major milestone in January 2016, when it became an observer member of ENTSO-E, which enables TEIAS to participate in groups and task forces within the association. Earlier, on April 15, 2015, Turkey was permanently connected to ENTSO-E’s continental Europe grid, following a negotiation process and trial synchronisation process that started in September 2010. Turkey’s connection to Europe’s grid will prove to be extremely beneficial for the country, as it will increase import-export opportunities and help improve network reliability. It is estimated that with a permanent connection, Turkey will be able to increase its electricity trade volume with Europe, via Greece and Bulgaria, to about 1,000 MW from the current 550-400 MW. In addition, Turkey will be able to decrease its reserve generation capacity from 900 MW at present to around 400 MW. 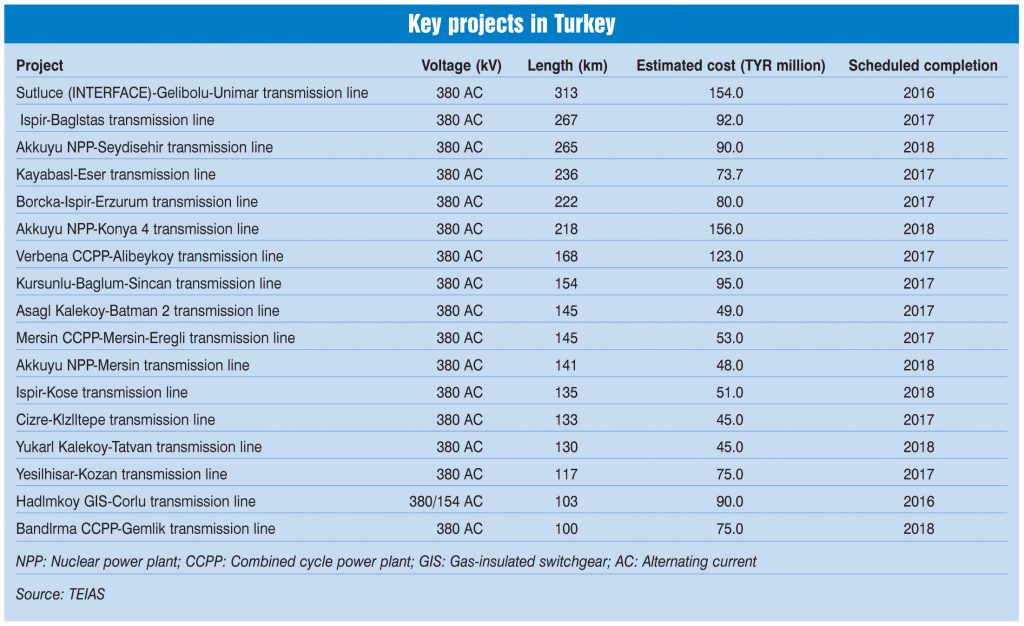 Turkey is also planning a new interconnection with Romania. The project will either entail developing a 400 kV high voltage direct current (HVDC) submarine cable link via the Black Sea, or transfer through the Bulgarian network via overhead lines. The construction of another 400 kV transmission line with a DC back-to-back station in Turkey, connecting with Syria, is under consideration. In addition, Georgia’s Energo-Pro is developing the 17 km 154 kV Batumi–Muratli transmission line of 350 MW capacity between Georgia and Turkey. The link is expected to be commissioned in 2016. Turkey is also engaged in a feasibility study of the Azerbaijan–Georgia–Turkey power bridge, which envisages greater interconnection of the high voltage networks of the three countries from a subregional perspective.

Among the other long-term investments is a proposed plan to link the Arab countries through a common power grid. The Arab countries plan to eventually connect the Arab grid to Turkey, which is already linked to the rest of Europe. This will enable both the Arab and the European countries to tap into each other’s energy resources. Studies on how best to create such a unified grid are under way.

The upswing in Turkey’s electricity sector depends directly on the country’s economic growth momentum, which is threatened not only by the possibility of economic stagnation in the Euro zone, but also by political unrest in neighbouring countries. However, the increase in private consumption, stability in inflation, and lower interest rates and production costs are providing the much-needed positive push to the investment scenario.

In the electricity sector, the government has drawn up ambitious plans to augment generation and transmission capacity to cater to the growing power demand. Investments in developing interconnections are only likely to increase as Turkey’s importance in the energy market grows as a regional energy hub.