Power Line focuses on the strategies adopted by North Bihar Power Distribution Company Limited (NBPDCL), one of the two distribution utilities in the state, for expanding rural electrification, the challenges being faced in executing these works, and the future targets and plans in the area…

“Rural electrification works have been launched in a big way in North Bihar which is positively impacting the access to electricity in the region. NBPDCL has played an important role in this by efficiently coordinating with all the agencies involved and ensuring their timely completion,” remarks S.C. Jha, former member, Bihar Electricity Regulatory Commission (BERC).

A majority of the rural electrification projects in North Bihar are being executed under the central government’s Deendayal Upadhyaya Gram Jyoti Yojana (DDUGJY). A few additional projects are also being implemented through the Backward Region Grant Fund (BRGF).

The improved electrification scenario in North Bihar is a result of the collective efforts of central and state governments, NBPDCL, Rural Electrification Corporation Limited (REC), contractors and sub-contractors. The targets for each of the contractors are defined and monitored on a weekly basis.

The contractors have had to overcome multiple challenges at the execution level, one of them being accessibility, as the road infrastructure in the state remains under-developed, especially in remote regions. Works in several villages, especially in the Katihar district, have suffered due to frequent flooding by rivers. Some of the works have been pending due to delay in railway crossing approvals. There have also been instances of resistance by local famers against putting up towers and distribution lines through their agricultural fields.

To address and resolve such issues, NBPDCL and REC have been conducting regular review and monitoring meetings with contractors and sub-contractors. “The discom is very cooperative, listens to complaints about faults and tends to them immediately,” informs an REC engineer engaged in the execution of work in Katihar. Significantly, the discom has been taking a strict note of delays in the execution of projects due to the inefficiency of the contractors. Such contracts have even been cancelled and re-awarded to boost execution. The discom has even floated additional contracts or asked the selected contractor to increase manpower in order to ensure timely completion of work.

In addition to expanding the reach of the electricity grid in the state, NBPDCL has initiated a number of measures to improve metering, billing and collection in rural as well as urban areas.

In the rural areas, NBPDCL has appointed revenue franchisees to ensure timely meter reading, delivery of bills and revenue collections. At present, 1,817 rural revenue franchisees (RRFs) are operational in North Bihar. It is estimated that the average monthly collection through RRFs in North Bihar is about Rs 250 million. According to a senior official with NBPDCL, the utility has currently engaged Pricewaterhouse Coopers to evaluate the features of the RRF model and study ways to enhance its impact.

Further, NBPDCL engaged the services of National Informatics Centre to develop a software for streamlining billing and collection in rural areas. The software is currently under trial in the Hajipur division. It will be implemented in a phased manner in all rural areas by end-March 2017.

NBPDCL has also been working towards strengthening physical infrastructure with funding available under the government programmes. The utility is replacing old meters with electronic meters, and installing prepaid meters in government offices and in select locations in certain villages. It has deployed the remote meter reading technology for all HT and LTIS (three-phase) consumers. Spot billing has been initiated in a few areas through engagement of meter reading agencies. Time-of-day metering has also been introduced for connections with a minimum load of 1 MW. NBPDCL has initiated accounting of energy at the feeder and DT levels through consumer indexing.

To check losses, NBPDCL has installed aerial bunched cables with bearer wire for all the LT lines in the dense area. The utility is gradually re-conductoring all dilapidated conductors. Only star-rated distribution transformers are being procured to meet new and replacement demand. Further, the utility is conducting frequent raids and inspections of consumer premises to prevent theft. NBPDCL is also implementing schemes for voluntary disclosure of load.

The impact of rural electrification and other loss reduction initiatives by NBPDCL is clearly visible in the operational efficiency. The utility’s consumer base has increased steadily from 2.2 million in March 2013 to 3.9 million in September 2015. The growth in rural consumers has been substantial during this period, which is estimated to have increased from less than 1.5 million to more than 2.5 million. 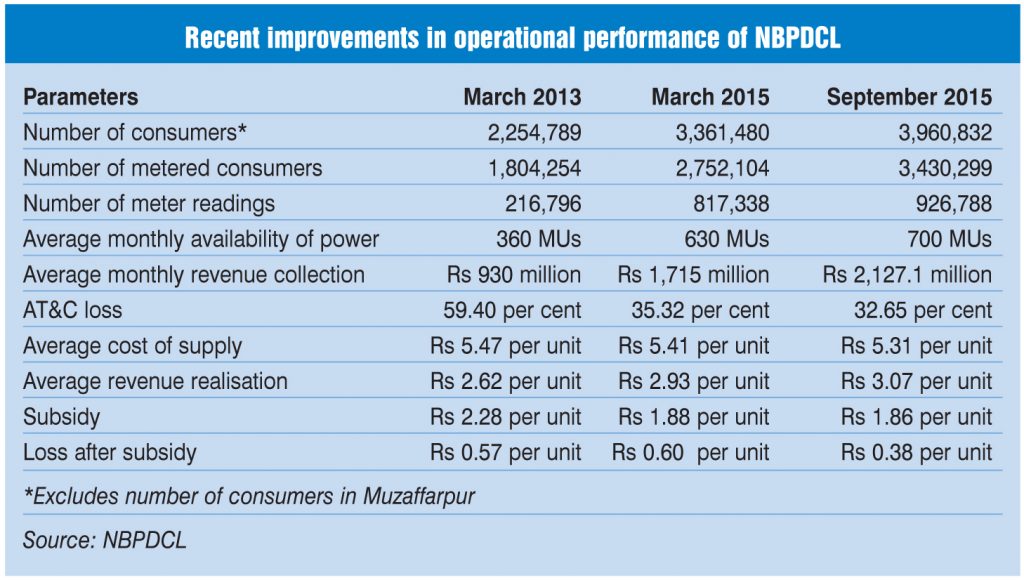 A Power Line survey also confirms the utility claims. A resident of Ashiana Nagar in Patna suggests that power supply in the state capital has improved radically and the utility has been intimating residents of power cuts in advance through publications in newspapers. Further, villagers in Muzaffarpur, Supaul and Madhubani inform that power is being supplied for about 15-18 hours in a day, while villagers in Saran and Samastipur districts report lower supply hours of 10-12.

The overall achievement of rural electrification in North Bihar is commendable. However, progress has been lacking in a few pockets owing to delays. Several villages located in the riverine or heavily forested areas in Supaul, Saharsa, Patna, Vaishali, Saran and West Champaran districts are still to be connected to the grid. Poor road connectivity is the key reason for slow progress in these areas. The installation of off-grid and mini-grid solutions is being explored to reach out to such regions. The utility is currently working on a detailed project report for such villages.

Reduction in AT&C losses is another key challenge for NBPDCL. The utility has committed to a loss reduction target of 15 per cent by 2019-20 under the Ujwal Discom Assurance Yojana. This will become more challenging with the growth in the number of rural consumers. It is expected that 2.7 million rural consumers will be added every year to NBPDCL’s total consumer base starting 2016-17. Meanwhile, given the expanding rural consumer base, NBPDCL must prepare to meet the increased demand at affordable prices.

The biggest challenge going forward for NBPDCL will be to improve household electrification, which remains dismal at present. As of June 2016, there are about 15,093 villages remaining under the intensive electrification of villages (IEV) programme. In addition, there are about 4.5 million below poverty line (BPL) households that are yet to be electrified. The state government has set the target of achieving 100 per cent electrification of rural and urban households by March 2019. However, funding remains a key challenge in achieving the target.

As explained by Jha, “Household electrification is a part of the utility’s long-term plan. However, a lack of adequate funds is a key challenge. NBPDCL does not have its own resources and financial institutions do not have the confidence in the utilities of Bihar to lend money for such projects. Works can only be taken up as and when central government funds come in.”