Rural infrastructure improvement has been the central component of Gujarat’s development agenda. The state takes pride in possessing one of the most developed electricity systems, having achieved the target of 24×7 power supply to villages under the Jyotigram Yojana launched in September 2003. In the recent years, the focus of investments in the state has been on improving the quality of power supply, connecting the remaining hamlets with the grid, increasing efficiency in the consumption, billing and collection processes, besides  adding to the share of renewable energy.

In line with these objectives, Gujarat has developed the country’s first rural smart grid pilot project in Shapur and Nana-Kajaliyara villages of Junagadh district. The landmark project was set up with the help of the state government grant of Rs 50 million extended to Paschim Gujarat Vij Company Limited (PGVCL) in April 2013.

Power Line recently visited Shapur village to understand the smart village project, assess the factors contributing to its success and evaluate its impact…

The choice of location for the smart village project was primarily driven by the availability of land. “At Shapur village, there is an old thermal power station (TPS) which was shut down years ago due to lack of water. PGVCL’s regional and divisional stores as well as the subdivision offices are situated within the compound of this TPS. Since three hectare of land was available at the site, it was selected for setting up the solar power plant,” informs P.P. Vohra, executive engineer, Junagadh division, PGVCL.

It was further decided to extend the smart grid component of the project beyond Shapur village to Nana-Kajaliyara village, because of its proximity as well as limited load. Shapur, with 2,090 connections, has an aggregate load of 1,862 kVA, while Nana-Kajaliyara, with 196 connections, has an existing load of 100 kVA. The electricity generated by the solar power plant is sufficient to meet the consumption demand of both the villages.

Selection of Shapur for the project presented an added advantage as it is one of the most developed and well managed villages in the state. It is a planned village with piped water supply, underground sewerage system, and a central communication and surveillance system, among other things. The gram panchayat of the village welcomed PGVCL’s proposal and supported deployment works wholeheartedly.

The engineering, procurement, construction contract for the Shapur solar power plant was awarded to Ahmedabad-based Rajesh Power Services Private Limited in August 2014. The Rs 27.3 million contracts also included development of the associated evacuation infrastructure, and operations and maintenance of the plant for five years.

The solar power plant comprises 1,720 modules of 280 watt capacity each, 15 inverters of 30 kW capacity each, 15 solar management units and a 630 kVA transformer. The system includes a weather monitoring station for accurate forecasting and scheduling, and a SCADA system for real-time monitoring of the plant performance. Islanding of the distributed generation project was not done because of the easy availability of grid. Additionally, it eliminated the need for load control measures and battery support, significantly reducing development costs.

The generation component of the project also included the installation of off-grid solar water pumps with a capacity of 5 HP and 7.5 HP at Shapur and Nana-Kajaliyara villages respectively. These pumps were supplied by Bright Solar Private Limited at a cost of Rs 1 million.

The contract for the smart grid component was awarded to Genus Power Infrastructures Limited in April 2015. The scope of the Rs 10.3 million contract included supply of smart meters, data concentrator units (DCUs), equipment for the RF-based system as well as commissioning of meter data acquisition and management system (MDAMS) and server side software.

The project entailed procurement of 2,750 smart meters, of which 2,297 are currently installed. These include single-phase RF meters, three-phase whole current RF meters and the LT-CT operated meters with built-in GPRS communication. “While the single- and three-phase meters communicate with the DCUs, LT-CT meters installed at the premises of high-end consumers communicate directly with the server. All meters are additionally installed with the optical port to enable local downloading,” informs Vimal Khatari, deputy manager, energy meters, Genus Power. 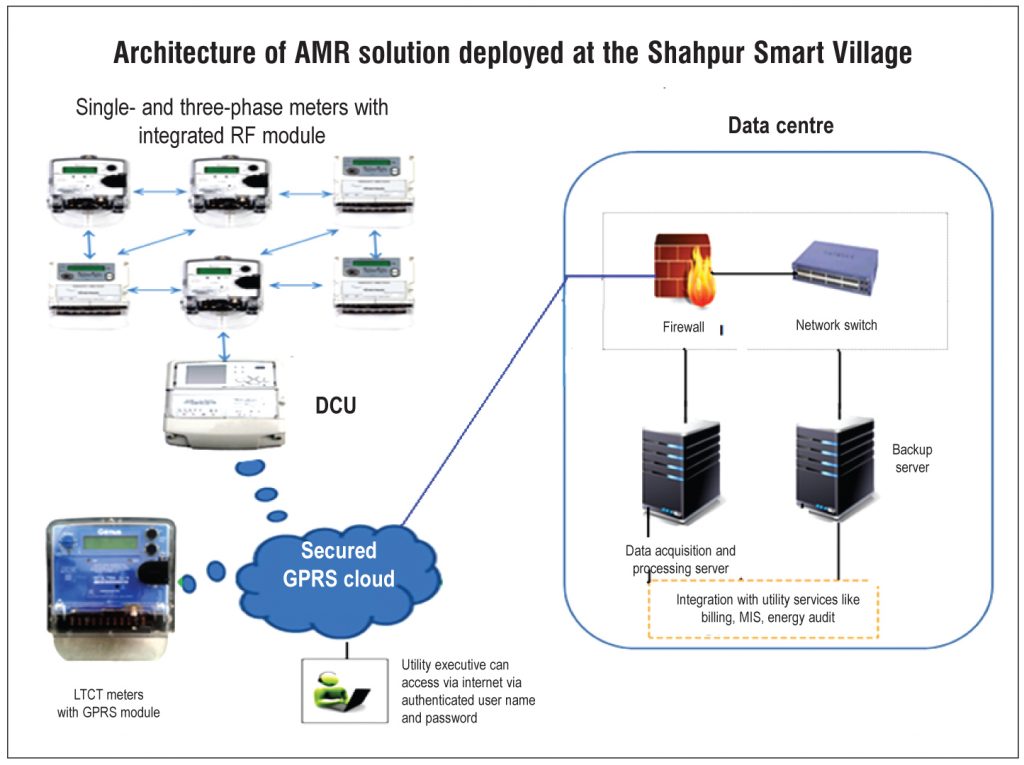 The AMR infrastructure from the project includes 55 DCUs, of which 48 are currently installed. These DCUs operate on Linux and communicate through RF and GPRS modems. Data from the smart meters is collected once a day, and the RF communication mesh is defined for 10 hops. These DCUs are self-healing in nature and automatically search for new meters at midnight or at every reset. The information collected by the DCUs is sent to servers installed at the energy management centre, also located in Shapur. The collected data is managed and analysed through a web-based MDAMS. The platform is compatible with PGVCL’s billing ERP module supplied by Oracle.

The distribution component of the project also included system upgrades at an investment of Rs 7.9 million. This included installation of aerial bunched cables, covering of distribution girders with a special coating for shock proofing, and fencing of all 31 transformers in the two villages.

The foremost challenge for PGVCL in executing the project was with respect to understanding the project requirements and the technology since the utility did not have prior experience with solar power generation or smart metering. This delayed the bidding process slightly, especially for the smart grid component as all the basic tendering parameters had to be developed in-house.

During the execution phase, the challenges in meter replacement were reduced due to the support of local villagers. PGVCL dedicated a budget of Rs 205,300 on informing and educating villagers about the project and its benefits. The centralised speaker system installed in Shapur was utilised to make announcements regarding the replacement works and the associated power cuts.

Despite these efforts, deployment of the smart grid component was delayed by about nine months. Meter replacement works were primarily affected due to premises being locked up for various reasons. Availability of the communication network was another major challenge. Vodafone, the internet service provider, had to instal a new tower to accommodate the demand from the project and to improve the signal strength. Additional efforts were dedicated for optimising the RF mesh design. Despite this, about 132 meters remain unmapped due to technological limitations and scattered location. Common meter reading instruments were provided for data collection from such meters.

As for the solar power plant, commissioning was delayed by 117 days, primarily on account of complications in the execution of civil works. For instance, the project developers had to undertake detailed shadow analysis before installing the PV panels because of the solar plant’s location next to the abandoned cooling tower of the old TPS. Developers also had to conduct detailed flood level analysis before execution of the project, as Shapur had been completely submerged during the floods in 1983. 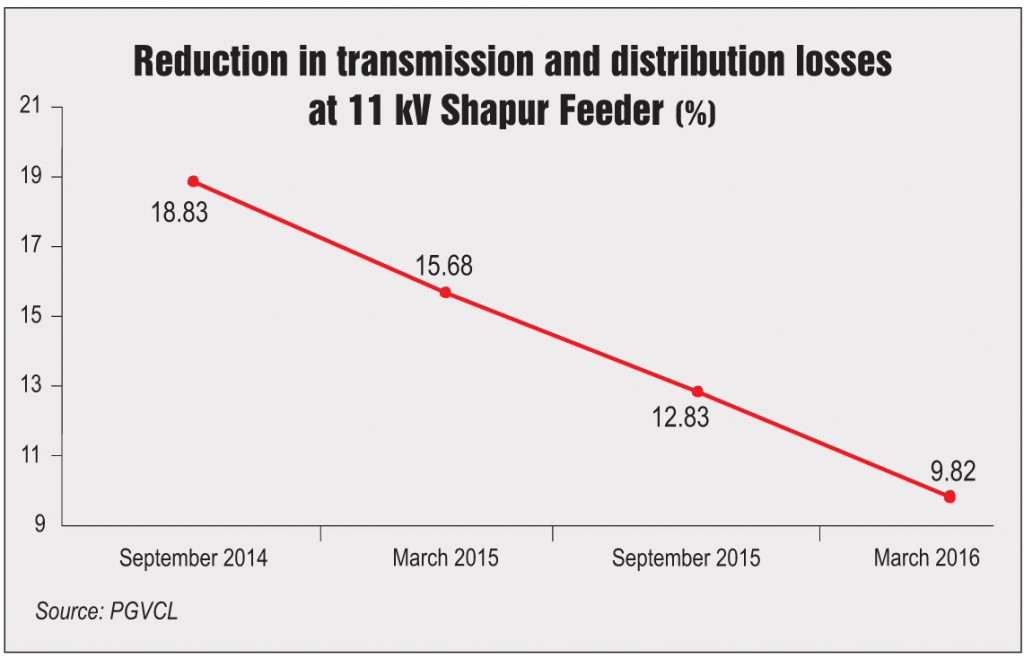 While it is too early to assess the impact of the smart village project, initial results are encouraging. The solar power plant is performing better than the initial expectations of PGVCL. Against the minimum capacity utilisation factor (CUF) requirement of 17 per cent set forth at the time of bidding, Rajesh Power had won the contract by guaranteeing a CUF of 18.008 per cent. During May 2015 to April 2016, the plant has been operating at an even higher CUF of 18.457 per cent. Given this, the payback period from the projects is estimated to be about five years.

As for the smart grid component, at present 90 per cent of the billing data from the two villages is being generated through the AMR system. This has improved the billing efficiency from 80-90 per cent to 100 per cent. The collection efficiency has also improved because manual meter reading generally involved a gap of about 15 days between data collection and bill generation. The system has reduced man power requirement for meter reading and inspection purposes.

The smart grid system has also led to the reduction in power theft as the MDAMS generates automatic tampering alerts. “The anti-tampering functionality of the smart meters has been of significant help. Instead of conducting mass checking, we now focus only on the leads generated by the system. This saves the utility’s time and effort, and it does not cause disturbance to genuine customers. Smart meters also create a deterrent for possible thefts as the consumers are aware that they will be caught by the system,” shares J.N. Talsania, deputy engineer, PGVCL.

The MDAMS has also enabled real-time monitoring of network parameters, leading to efficient load balancing and reduction in the failures of distribution transformers. The system also helps accurate accounting of peak demand and losses. The net impact of this has been that the transmission and distribution losses from the 11 kV feeder installed for Shapur village have decreased drastically over the past few months. The utility hopes to completely eliminate commercial losses in the region eventually.

“Application of improved metering and billing technologies in rural areas holds a significant promise for PGVCL. This is because at present the utility reports aggregate technical and commercial losses of 22 per cent, which are primarily driven by a 40 per cent loss reported in the rural areas. There are almost 250,000 unmetered consumers in the rural areas, who are billed based on their average consumption, driving up losses. Further, various industrial and commercial consumers have moved to rural areas due to good power supply and low tariffs. These consumers further impact utility profits. Smart meters can be a good solution in this context,” says Talsania.

Meanwhile, increased consumer satisfaction is one of the key advantages from the pilot project. An interaction with the village elders reveals that the power supply scenario in the village has improved significantly with the smart village project. “The voltage profile is significantly better. There have been no complaints regarding billing. With the elimination of manual intervention, the billing process has become hassle-free for us since no one knocks on our doors for taking meter readings. It was a challenge earlier when women were at home alone,” says Tinu Bhai Balji Bhai Varju, sarpanch, gram pachayat, Shapur. The project has brought an additional advantage of increased recognition for Shapur and also helped attract additional development grants.

“I believe improved electricity supply has been instrumental in arresting migration from our village. When the old TPS was shut down, the population in the village declined drastically from 13,000. Since the restoration of 24×7 power supply, the population has been stable at about 9,000,” says Varju.

The success of the Shapur smart village project has increased PGVCL’s confidence with the deployment of distributed generation and smart grid technologies. The utility is currently planning to instal 12,000 smart meters and to set up 60-70 solar rooftop installations over the next two years under the central government sponsored Integrated Power Development Scheme. An additional 60 kW solar power plant is also planned at the land available at Shapur. The progress of such initiatives will be contingent on the availability of funding.

Meanwhile, the Shapur smart village is a landmark project for PGVCL. While most utilities are struggling with the implementation of smart grid technologies in urban areas, PGVCL has done it successfully in these two villages. Various factors contributed to the project’s success, including availability of land, funding support from state government, strong commitment of the utility, dedicated efforts of contracts as well as cooperation of villages. The project is generating substantial benefits in terms of improved billing efficiency and reduced losses, while helping the utility meet its renewable purchase obligations.