In India, the majority of the installed capacity as well as generation is coal based. It is most likely that India’s power generation, over the next few decades will continue to depend heavily on coal. Coal is not only a finite source of energy, but also a highly polluting one, necessitating its more efficient use. Limiting CO2 emissions is a huge challenge and a number of steps are being taken on this front. To this end, the use of advanced technologies including supercritical (SC) and ultra-supercritical (USC) technologies can significantly improve the overall operational efficiency of the power plant and help in reducing the emissions. The government has made use of SC technology mandatory for the ultra mega power projects (UMPPs) being implemented. It has also been decided that all the coal fired capacity addition in the thirteenth Five-year Plan (2017-22) will be through SC units only.

Generation technology has evolved significantly over the past few decades and continues to evolve to address the challenges arising from the changing power scenario. Various plants have moved from using subcritical technology to SC. Further, research is being undertaken for the development of advanced ultra supercritical (A-USC) technology for thermal power plants. Circulating fluidised bed combustion (CFBC) is another efficient boiler technology which offers possible reduction in emissions.

SC units have been widely in use around the world for many years now. In India, the development and adoption of SC and USC gained popularity over the past decade only, driven by the need for increasing efficiency. These technologies are more efficient, consume less coal, reduce start-up time, increase operation flexibility and emit less CO2 as compared to conventional subcritical units that dominate the power generation sector in India.

Hence, switching to SC and USC units can increase the efficiency of thermal plants. In order to promote the same, the Government of India issued a policy on automatic transfer of coal linkage in the case of replacement of old subcritical units with new SC plants.

A consortium of three government entities, namely, Bharat Heavy Electricals Limited (BHEL), the Indira Gandhi Centre for Atomic Research (IGCAR) and NTPC Limited, is undertaking a project for the development of A-USC technology for thermal power plants. The total cost of the project is estimated to be Rs 15.54 billion, of which Rs 9 billion is being funded by the central government. In addition, the Department of Science and Technology will be contributing Rs 1 billion for the project. The remaining will be contributed by the consortium partners – Rs 2.7 billion by BHEL, Rs 0.5 billion by NTPC and Rs 2.34 billion by IGCAR. The design is likely to be ready by 2019-20. This will be the first time that large power plant equipment will be manufactured with advanced technologies in the country, without any technological collaboration/licensing agreement with foreign companies. The proposed technology is still in the research stage in other countries as well and has not been demonstrated anywhere in the world. 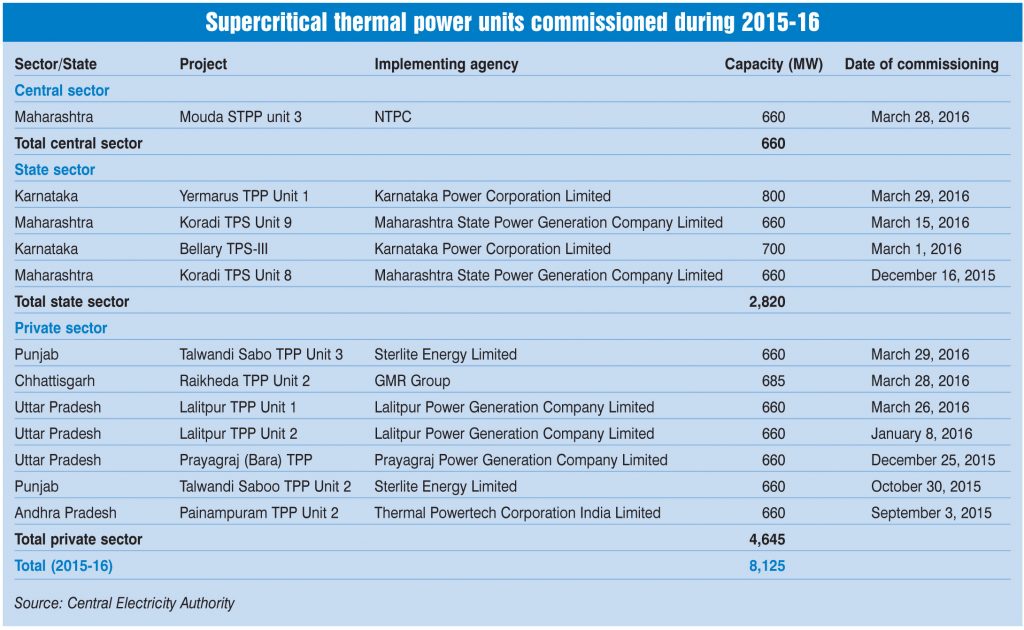 The CFBC boiler technology provides significant fuel flexibility while reducing emission levels. CFBC boilers can use different types of solid fuels including low quality coal, lignite, bagasse, coal washery rejects, coke and other biomass products. Mixing with coal or using coal when other fuels are not available gives an uninterrupted steam and energy supply. Hence, plants with CFBC boilers and access to various kinds of fuel stand to gain significantly from the fuel arbitrage.

CFBC boilers generally operate at 800ºC-900 ºC at which temperature the formation of nitrogen and other oxides is much lower. Further, the use of limestone in a CFBC boiler reduces the emission of sulphur oxides by converting them to sulphates during the combustion and circulation.

The unit size of the available CFBC boilers has increased over the years, from 35 MW in 1994 to 800 MW at present. However, in India, the largest unit size of an operational CFBC boiler is 250 MW, owned and operated by the Neyveli Lignite Corporation. Also, their efficiency level is still lower than those of SC or USC. Research works are going on to develop CFBC boilers with higher efficiencies.

Since CFBC boilers can handle different types of coal, the use of technology has a significant potential in India in view of the low quality of domestic coal and the need to blend it with high gross calorific value (GCV) coal. The application of CFBC technology is only expected to increase in India as the Central Electricity Authority calls for future plants to be designed for blend ratios of up to 30 per cent with imported or high GCV fuels. Further, the central government is also working towards increasing the production of domestic coal and reducing imports.

However, implementation of CFBC boilers has witnessed some operational challenges related to solids handling and deposition. While these were overcome eventually, they have led to significant delays in the commissioning of units. With the learnings from past experience and further research related to the technology, the use of CBFC boilers ought to increase in the future.

In view of the efficiency gains that modern boiler technologies offer, along with other environmental and economical benefits, it is only prudent to implement them in power plants – upcoming as well as existing ones. The same is being supported by the government as well in the form of various policies and guidelines.

While technologies including SC and USC are already well recognised, the widespread adoption of CFBC technology will take some time in view of its operational challenges. Going ahead, the development of A-USC technology will be an important breakthrough in the field of boiler technologies.