At a time when low PLFs and stressed discoms are putting pressure on the generation and distribution segments respectively, the transmission segment represents a relatively bright spot on the country’s power map. Its growth story looks promising with investments of nearly Rs 2.6 trillion forecast by 2022, as per the Central Electricity Authority’s (CEA) recently released draft National Electricity Plan. The projected investments are almost 1.4 times those planned for the Twelfth Plan period.

The National Electricity Plan, which is prepared every five years and is the basis for investment and policy planning, indicates major expansion and transformation of the transmission grid over the next few years. The CEA projects an addition of almost 100,000 ckt. km of transmission lines and 200,000 MVA of transformation capacity (at the 220 kV and above voltage levels) during the Thirteenth Plan period. An interregional capacity addition of around 45,700 MW is expected as compared to 29,700 MW planned for the previous plan period.

“The transmission industry has played the role of a key integrator in the country’s electricity market. Going forward, transmission will continue to play a major role, especially with large-scale renewable energy ingress into the grid. This will require the creation of major transmission superhighways. The Green Energy Corridors (GEC) initiative is to this end,” notes Anish De, partner, KPMG.

Power Grid Corporation of India Limited (Powergrid) recently outlined its strategy for the second phase of the GEC, which will help integrate 20 GW of solar capacity from the 34 solar parks that are expected to come up in 21 states. An investment of Rs 127 billion has been envisaged in solar power transmission capacity as part of this phase.

Another key trend expected to dominate the grid is the “smartening” of the grid. New technologies such as HVDC and dynamic compensation devices are expected to see massive investments going forward. “Transmission systems will have to become more dynamic than passive to cater to the sporadic nature of distributed generation, renewable generation, climate change, etc. This will drive unprecedented investments in sensors, data analytics, dynamic controls, among other things,” comments Pratik Agarwal, chief executive officer (CEO), Sterlite Power.

Meanwhile, as India looks to augment its cross-border ties, new connectivity projects and expansion of the capacity of existing interconnection systems for trading power surpluses and shortfalls in South Asian countries are also an important part of India’s transmission strategy.

The following is an assessment of the transmission segment outlook, given the ambitious growth targets and recent investment projections… 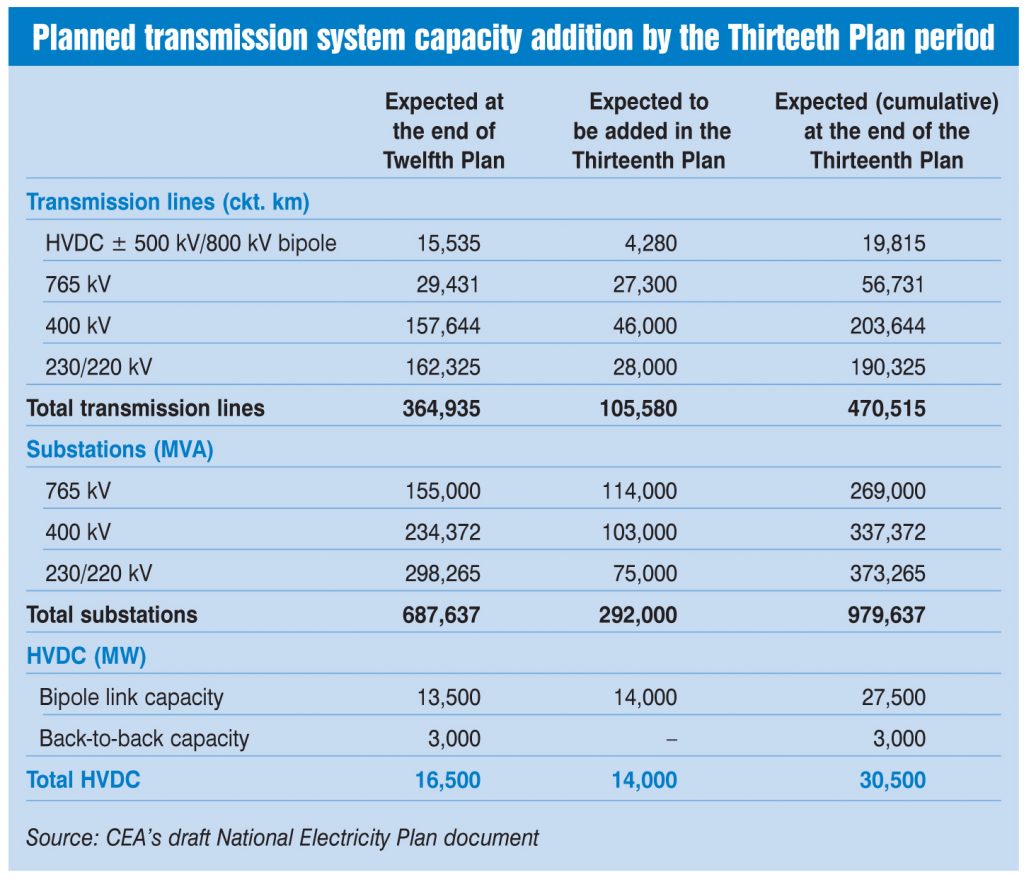 During the Twelfth Plan period, which will come to a close in March 2017, around 107,454 ckt. km and 287,836 MVA of transformer capacity is likely to be achieved. The total HVDC capacity proposed to be added during the Thirteenth Plan is expected to be around 14,000 MW, which would take the total capacity to 30,500 MW by the end of the plan period.

The total interregional transfer capacity is close to 63,650 MW at present, which would increase to 72,350 MW by March 2017. During the period 2017-22, an additional 45,700 MW is expected to be added, taking the total transfer capacity to around 118,050 MW, almost double the current size. In comparison, during the Twelfth Plan period, around 29,700 MW of capacity has been added. Another key focus area will be reactive power management. 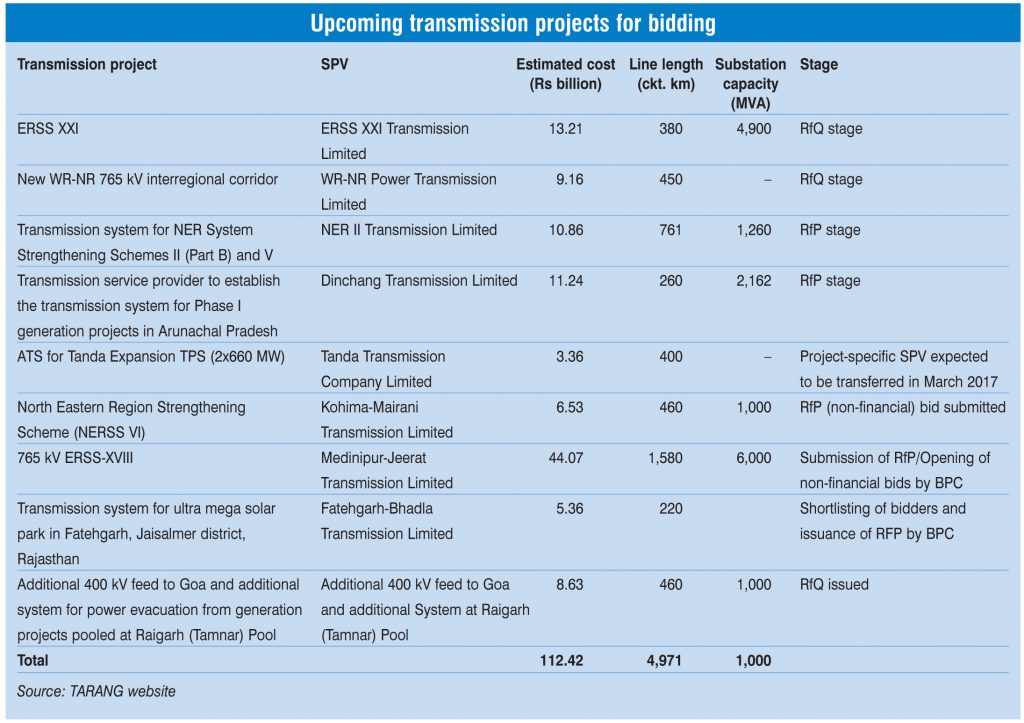 In December 2016, a comprehensive transmission plan for the second phase of the GEC was released by Powergrid under the Green Energy Corridors-II report. The report outlines a strategy to integrate 20,000 MW of capacity from 34 proposed solar parks in 21 states, out of a total solar capacity addition target of 100,000 MW. The plan comprises interstate and intrastate transmission schemes with 7,200 ckt. km of transmission lines and 28,700 MVA of transformation capacity at an estimated cost of about Rs 127 billion. Of this, Rs 80 billion would be invested in inter-state transmission projects and Rs 47.45 billion for intra-state capacity. A large portion of financing for this project will come from German development bank KfW, which will provide a soft loan of around $1.1 billion.

Renewable energy management centres (REMCs) are also being set up to forecast renewable power generation and demand. These centres will be interconnected with the load despatch centres (LDCs) to gather real-time information, and monitor and control capacity addition.

Meanwhile, the projects under GEC-I (which is being implemented in four tranches – Parts A, B, C and D) are expected to be progressively commissioned in 2017-18. Around 17,000 ckt. km of lines and 34,650 MVA of substation capacity are envisaged to be added at the interstate and intra-state levels under GEC-I. For the interstate transmission projects pertaining to Parts A, B and C of GEC-I, a loan agreement for financial assistance of Euro 500 million from KfW has been signed by Powergrid. For Part D, Powergrid has taken a loan from the Asian Development Bank.

Over the next few months, nine schemes worth almost Rs 112 billion are expected to be auctioned, according to information accessed from the TARANG website, the portal launched by the power ministry last year to track upcoming transmission projects. The bid process coordinator for five of these projects, including the transmission system for the ultra mega solar park at Fatehgarh in Rajasthan, is PFC Consulting Limited. REC Transmission Projects Company Limited is the bid process (BPC) coordinator for the remaining four.

The bid process coordinators have started issuing the requests for qualification (RfQs) and requests for proposals (RfPs) for these projects. Interestingly, with these projects, this will be the first time that transmission projects will be auctioned through the reverse e-auction route on an electronic platform, marking a major shift from the old regime. The move is aimed at facilitating better price discovery.

The largest of these is a tender floated by PFC Consulting for the Rs 44 billion Eastern Region Strengthening Scheme (ERSS)-XVIII project to strengthen the electricity network in the region. The RfP for the project was submitted recently by the bidders. The qualified bidders for this project are Powergrid, Adani Transmission Limited, Sterlite Grid, Essel Infra Projects, Kalpataru Power Transmission Limited and Tata Power Company Limited. The project will be awarded on a build-own-operate-maintain basis.

Apart from significant investments in the grid, the transmission planning framework is also expected to see a significant change as further steps are taken for the introduction of the general network access (GNA) concept.

“With the one nation, one grid concept in place, we need to work towards grid strengthening and reliability. With the electricity market becoming active, we are seeing sellers and buyers opting for short-term open access. This leads to network congestion. A shift in approach is envisaged, with regulations introducing GNA and more predictability in network injection and drawal. A number of transmission projects may be introduced to execute this concept,” explains Alok Roy, CEO, Reliance Power Transmission Limited.

A major step in this regard was the release of a report in September 2016 by a committee appointed by the Central Electricity Regulatory Commission (CERC), elucidating the working of the GNA concept in transmission planning. The next steps are expected to involve in-principle approval by the CERC for the adoption of the new approach, followed by the notification of associated regulations on connectivity, long-term access and medium-term open access.

Another key aspect of India’s future transmission strategy is expected to be the strengthening of cross-border interconnections. India currently exports 540 MW of power to Bangladesh through the Bheramara (Bangladesh) link commissioned in 2013. By 2018, a capacity of 1,000 MW is targeted to be exported by enhancing the capacity of the Bheramara HVDC station. Another proposal for a 765 kV transmission link for interconnecting the northern part of the Bangladesh grid is under finalisation. This would allow Bangladesh to import up to 1,000 MW.

Currently, 300-320 MW of power is being supplied to Nepal. With the commissioning of 132 kV links (the Raxaul-Parwanipur and Kataiya-Kushaha line) and the upgradation of the 400 kV D/C Dhalkebar-Muzaffarpur line, power export to Nepal would increase by 250 MW. Further, the 400 kV Muzaffarpur (India)-Dhalkebar (Nepal) line is expected to be operated at its rated voltage by December 2017, which would further enhance power transfer to Nepal by 300-400 MW.

There are three interconnections with Bhutan at present. To evacuate power from the 4,482 MW of hydro projects that are envisaged to come up in Bhutan by 2021-22, two additional 400 kV links (Punatsangchu HEP-Alipurduar and Jigmeling-Alipurduar) are expected to be operationalised during the Thirteenth Plan period. A proposal for a 2×500 MW HVDC bipole line from India (Madurai) to Sri Lanka, along with HVDC terminals, is also under study and discussion.

To achieve the Thirteenth Plan targets, it is crucial to address the multiple issues hampering transmission infrastructure development. As many as 125 transmission projects are behind schedule by more than two years on account of right-of-way issues, forest clearances and other issues, according to statistics monitored by the Ministry of Power.

In fact, non-timely completion of the GEC project is a key cause of concern for the industry. According to Raj Prabhu, CEO, Mercom Capital Group, “For a project that has already had its share of delays and is being touted as the cure-all for grid issues, the renewable energy sector is sceptical whether it will get done in time to make an impact. We have already had curtailment and evacuation issues in several states, with a 4 GW solar market this year. Next year, solar demand is forecasted to more than double that, and there is a legitimate concern that the current grid infrastructure will be inadequate to handle this capacity, let alone wait until 2020 for the green energy corridors to come up.”

The urgency in building new systems would thus be critical. “The gestation period for wind and solar plants is just 6-18 months as compared to 60-80 months for conventional plants. Hence, transmission infrastructure needs to be built in one third the usual time. This will require the use of cutting edge construction technology, faster environmental clearances, and quicker project awards,” says Agarwal.

The good news, however, is that funds mobilisation through new avenues is expected to gain traction. Private transcos are increasingly looking at investment infrastructure trusts (InvITs), a new asset class launched by the Securities and Exchange Board of India, for raising funds. InvITs are trusts that manage income-generating infrastructure assets, typically offering investors regular yields and a liquid method of investing in infrastructure projects. “The year 2017 may be a year when developers set up InvITs to unlock their equity and look for fresh capital to build further on their portfolio,” Roy notes.