In a first, the Ministry of Power (MoP) has notified the “guidelines on Cross-Border Trade of Electricity”. The key objective is to facilitate and promote cross-border electricity trade, and ensure greater transparency, consistency and predictability in regulatory approaches across jurisdictions while maintaining grid security.

This is in line with the South Asian Association for Regional Cooperation (SAARC) framework agreement for energy cooperation (electricity) signed in November 2014. The agreement recognises that cross-border electricity trade complements the region’s resource endowments and helps meet its electricity demand. The latest guidelines, notified in December 2016, have been framed to ensure that such transactions are aligned with the existing laws and requirements for physical infrastructure development, reliable and stable system operations, economic and commercial aspects, system demand, and settlements and reconciliation of the obligations.

Further, the need for greater clarity on the policy stance with respect to cross-border trade through the power exchanges has resulted in the formulation of these guidelines. The Central Electricity Regulatory Commission (CERC), while hearing petitions seeking approval for the above, requested the MoP to give guidance on the issue (see Box).

At present, cross-border electricity trade in India takes place with Bangladesh, Bhutan and Nepal under bilateral MoUs and power trade agreements. These contracts will continue to be in place till their expiry. India also started supplying power to Myanmar across the Moreh-Tamu border in April 2016 following Myanmar’s request during the first meeting of the India-Myanmar Joint Consultative Commission in July 2015. Subsequently, in October 2016, the two countries signed an MoU on power and are considering strengthening the transmission network to increase power supply in the future.

India’s power grid is interconnected with Nepal’s grid through 12 radial links at 132/33/11 kV, which, along with the recently commissioned 400 kV Muzaffarpur (India)-Dhalkebar (Nepal) link, enable about 400 MW of power export to Nepal. With Bangladesh, India’s grid is connected through two 400 kV links allowing exports of up to 600 MW. In the case of Bhutan, India imports around 1,540 MW of power through synchronous interconnections associated with the Chukha (at the 220 kV level), Kurichu (132 kV) and Tala (400 kV) hydro projects, besides the 124 MW Dagacchu hydro project. Further, several interconnections have been planned with these countries to enhance power trade. With the increase in trade in the region, grid operation protocols covering safety, scheduling and despatch, metering, accounting and deviation settlement need to be harmonised.

Institutional framework: To clearly define the institutional framework governing cross-border trade, the guidelines require the MoP to designate an authority to facilitate the approval process and lay down the procedure for electricity trade between India and its neighbours. In line with this, the MoP has nominated the member, power system, Central Electricity Authority (CEA), as the designated authority. The CERC will frame the appropriate regulations for such trade, which will be binding on all participating entities. 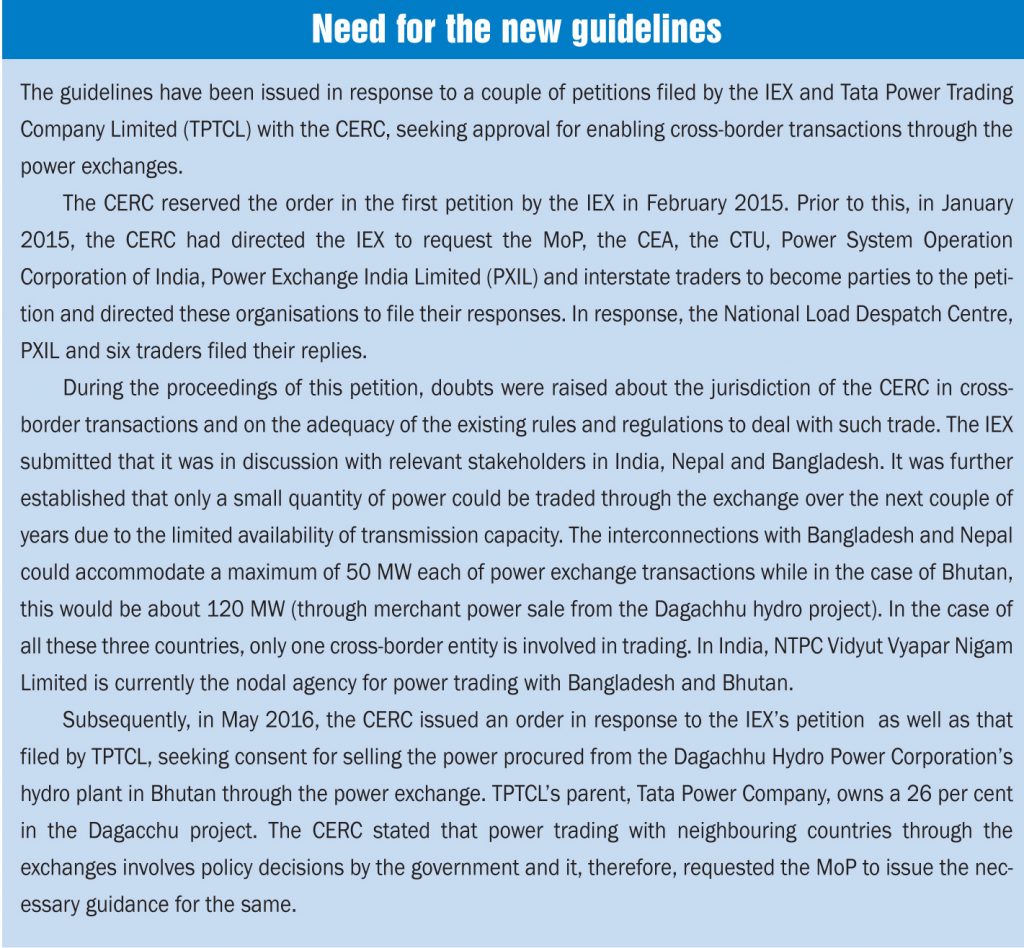 Given that such transactions have strategic national and economic importance, the guidelines specify eligibility conditions for participating in it. After obtaining one-time approval from the CEA, Indian entities can import electricity from overseas generation projects or licensed traders, which must be either wholly owned by the Indian government or at least 51 per cent owned by an Indian organisation (public or private). This one-time approval rule also applies to projects and companies with 100 per cent equity owned or controlled by the government of a neighbouring country with which electricity trade is taking place. The CEA has to be intimated about any changes in the equity structure of such companies and fresh approval has to be obtained for trade in this case. The eligibility of other entities to participate in cross-border trade will be determined by the CEA on a case-to-case basis.

Discoms and PSUs are allowed to export electricity if surplus capacity is available with them. Coal-based projects owned by private companies are eligible for exporting electricity only if surplus capacity is certified by the CEA. The MoP may also identify sources from which power can be exported. Project developers in neighbouring countries participating in cross-border trade with India are required to submit technical information to the CEA along with commercial and financial information if required. 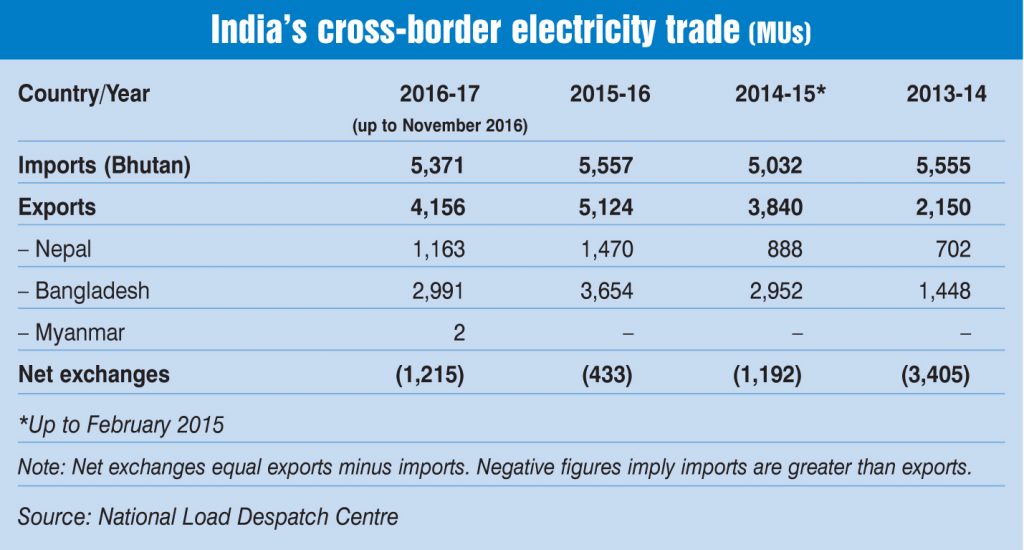 Such entities could opt for term-ahead, intra-day or contingency contracts. Other categories may be included for cross-border trade based on the MoP’s review in consultation with the CERC. The CEA is expected to periodically prescribe the quantum of electricity for cross-border transactions on the exchanges.

The CERC regulations on cross-border electricity trade will determine the transmission access priority for such transactions besides the associated transmission charges, scheduling, accounting and deviation settlement. For the settlement of grid operation-related charges as per the regulations, the MoP will nominate a nodal agency for each neighbouring country.

Generators exclusively exporting power can build cross-border interconnections with appropriate approvals and at costs decided in the agreement entered into with the neighbouring country. Such approvals will be governed by the provisions of the Electricity Act, 2003.

Dispute resolution: Disputes within Indian territory will be settled as per the provisions of the Electricity Act, 2003. Disputes involving entities from other countries could be settled through the Singapore International Arbitration Centre or as mutually agreed to by the participating entities.

The next step after notifying the guidelines will be the issuance of relevant regulations by the CERC after consultations with stakeholders. This could take place during the current fiscal. Once the regulations are in place and the participating entities have obtained the requisite approval from the CEA, cross-border trade could commence in a limited way on the exchanges. The quantum of trade on the exchanges would be small due to the limited availability of surplus transmission capacity in the existing cross-border interconnections. In the short term, one factor that could free up some transmission capacity for such trade with Nepal would be the operation of the Muzaffarpur-Dhalkebar line at its rated voltage of 400 kV. Currently, this line is being operated at 132 kV, which is proposed to be enhanced to 220 kV by March 2017 and subsequently to 400 kV when the 400 kV Dhalkebar substation in Nepal is commissioned. This will enable the transfer of 300-400 MW of capacity as compared to the current 160 MW. The existing transmission capacity in Bangladesh is almost fully utilised while that in Bhutan may allow power import from the 124 MW Dagacchu hydro project. Currently, the exchanges have not been allowed to facilitate cross-border transactions in the day-ahead market, which was requested by the Indian Energy Exchange (IEX) through its petitions to the CERC. Given the experience with the other products allowed by the guidelines, these restrictions could also be removed to create free-flowing electricity trade with the neigbouring countries.

“The guidelines have allowed a limited window for trade on the exchanges. However, we should not delay the introduction of day-ahead contracts for such transactions. This market has the advantages of enabling greater competition, improved liquidity and better utilisation of transmission capacity, which is well established worldwide including the European Union,” says Rajesh Mediratta, business development, IEX.

The guidelines could prove to be a turning point in the creation of a regional electricity market and a robust cross-border electricity infrastructure. The guidelines give preferential treatment to overseas power generators and trading companies, in which the majority stake is held by Indian firms (public or private). It has also simplified the process for all government-owned companies of neighbouring countries. This may be contrary to the expectations of foreign investors in hydropower projects, particularly in Nepal and Bhutan, who are looking to export electricity to India. That said, the guidelines have not barred other companies from participating in cross-border electricity trade and have clarified that they will be dealt with on a case-to-case basis. In fact, greater clarity in policy and regulations will help in fast-tracking the development of the huge untapped hydro potential in the neighbouring countries. India has also taken the lead in promoting cross-border trade through Indian power exchanges, which will be a first in the region. The latest developments will provide the building blocks for the formation of a larger regional electricity market in the medium to long term. This will, in turn, help attract greater investments in power generation and transmission infrastructure in the region, and enable its optimal utilisation. The evolution of such a market has begun with Bangladesh, Bhutan, India, Myanmar and Nepal as participants.