India is dependent on coal-based power generation to meet its current power demand. However, the coal used in these power plants is usually of low grade with 30-45 per cent ash content as opposed to imported coal with ash content of 10-15 per cent. Given the huge installed coal-based power capacity, the quantity of ash produced in India is a big source of air and water pollution, and poses a challenge in terms of its disposal.

The government has regularly released mandatory targets for thermal power plants (TPPs) to manage their ash production as well as achieve the target of 100 per cent utilisation in a phased manner. The latest amendment made in January 2016 by the Ministry of Environment, Forest and Climate Change extended the deadline for achieving 100 per cent fly ash utilisation to December 2017. The amendments also require TPPs to bear the entire cost of ash transportation up to 100 km, and share it equally with the user for distances between 100 km and 300 km. 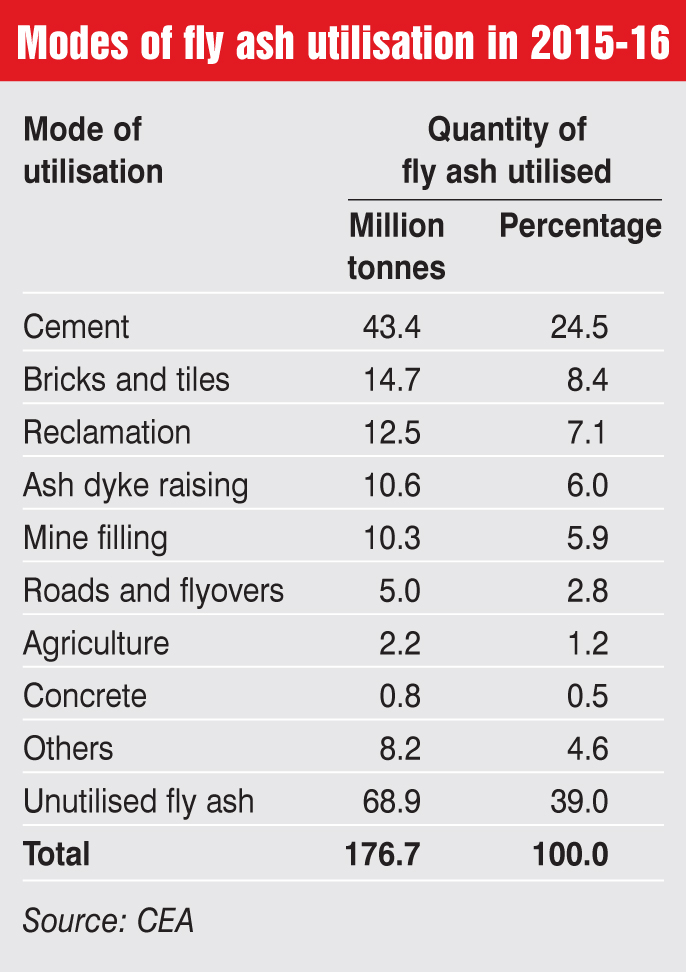 The Central Electricity Authority (CEA) monitors ash generation from and management of TPPs throughout the country and releases a biannual report analysing the findings. The latest report was released in October 2016 and provides an insight into the ash management and utilisation trends in 2015-16. For this purpose, data from 151 coal-based power stations with a cumulative capacity of about 145 GW was analysed. During 2015-16, these power stations consumed 536.64 million tonnes (mt) of coal and produced 176.74 mt of fly ash, of which about 60.9 per cent or 107.7 mt was utilised, compared to 55.69 per cent in 2014-15.

The average ash content from TPPs was found to be 32.94 per cent. Of the 151 plants tracked, 48 achieved 100 per cent ash utilisation, while 37 achieved 75 per cent to 100 per cent. Another 14 per cent were able to utilise 60-75 per cent of the ash produced, while 45 TPPs were unable to achieve even 60 per cent. Seven power stations did not generate any significant fly ash. 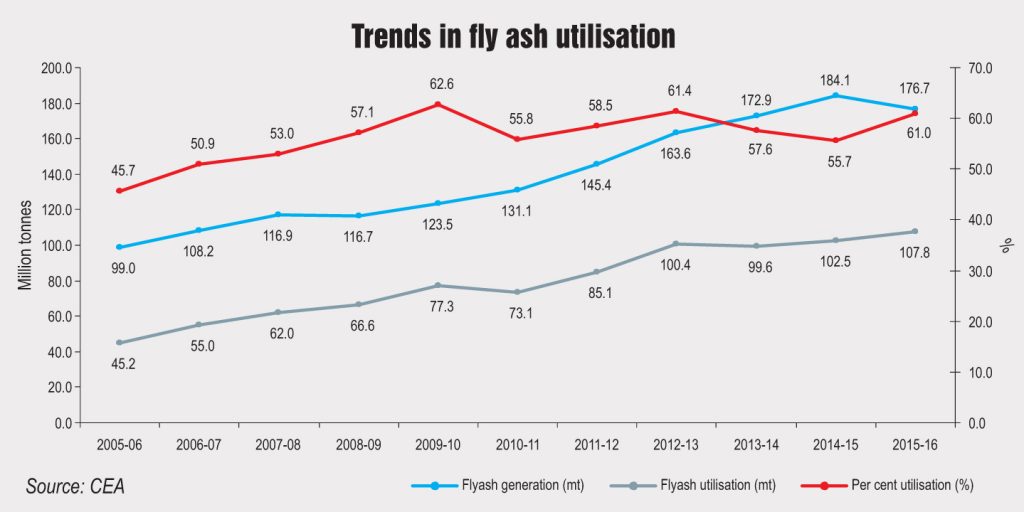 The CEA has made certain recommendations for better utilisation of fly ash. While it recommends technological upgradation of coal- and lignite-based power plants so that fly ash is produced in dry form, renovation and modernisation efforts should include the development of fly ash-based industries and promote its use within the TPP. The use of fly ash should be extended for laying railway lines, wasteland development and agricultural purposes.

In sum, while the utilisation of fly ash has been improving over the years, it will require concerted efforts to reach the target of 100 per cent utilisation by 2017, as stipulated in the January 2016 notification. This will not only result in better utilisation of the by-product but will also lead to the development of a new industry. However, it is necessary to strictly monitor and regulate the use of fly ash according to the prescribed regulations.