Given the growth forecast in renewable energy capacity, utility-scale energy storage systems (ESS) are expected to play a crucial role in helping grid operators maintain system stability, while facilitating the efficient integration of renewables into the network. Globally, the US continues to take the lead in ESS deployment while many other countries have begun to provide the requisite policy push to effectively use energy storage to meet their clean energy goals. According to the International Energy Agency’s (IEA) Energy Storage Technology Roadmap of 2014, around 310 GW of new storage capacity could be required by 2050 across the US, Europe, China and India. In the medium term, estimates indicate that at least 15 GWh of energy storage capacity will be installed in India by 2020.

A well-defined policy and regulatory framework to support energy storage is so far absent in India. However, a handful of grid-connected energy storage projects (other than pumped hydropower storage) have been awarded over the past year or so or are being bid out (see Box). The first steps to put in place a regulatory framework for ESS have been taken by the Central Electricity Regulatory Commission (CERC) issuing a staff paper, “Introduction of Electricity Storage System in India”, in January 2017. The paper covers the probable grid-level applications of ESS, operational framework and recovery of electricity storage services in detail, and is open for stakeholder comments until March 6, 2017.

Power Line presents some of the key features of the staff paper.

The CERC has published the staff paper with the intention of generating discussion among the stakeholders on storage technologies and ascertaining users’ perceptions on the various issues regarding the deployment and operation of grid-level storage technologies. Specifically, stakeholder comments have been sought on the need for storage systems, criteria for development of storage facilities and the associated transmission system, the policy changes required, the commercial viability of storage systems, the tariff model for multiple uses, operational or performance parameters for cost recovery, regulatory reporting requirements of financial and non-financial data by storage systems, and the methodology to deal with the scheduling, accounting and open access issues associated with the measurement of output of generation and energy storage at two different points.

Given that energy storage is an emerging technology and is still at a nascent stage of development world over, there is a need to recognise its utility in the present context through a suitable regulatory framework. In this scenario, appropriate mechanisms have to be put in place to compensate such resources for the multiple values, including operational flexibility that they provide. Therefore, the central regulator’s initiative has come at the right time as clarity on the regulatory framework will help channelise investments into this segment. In the immediate to medium term, the demonstration projects that are under way across the globe are expected to help storage technologies gain further maturity and become commercially viable for utility-scale applications. 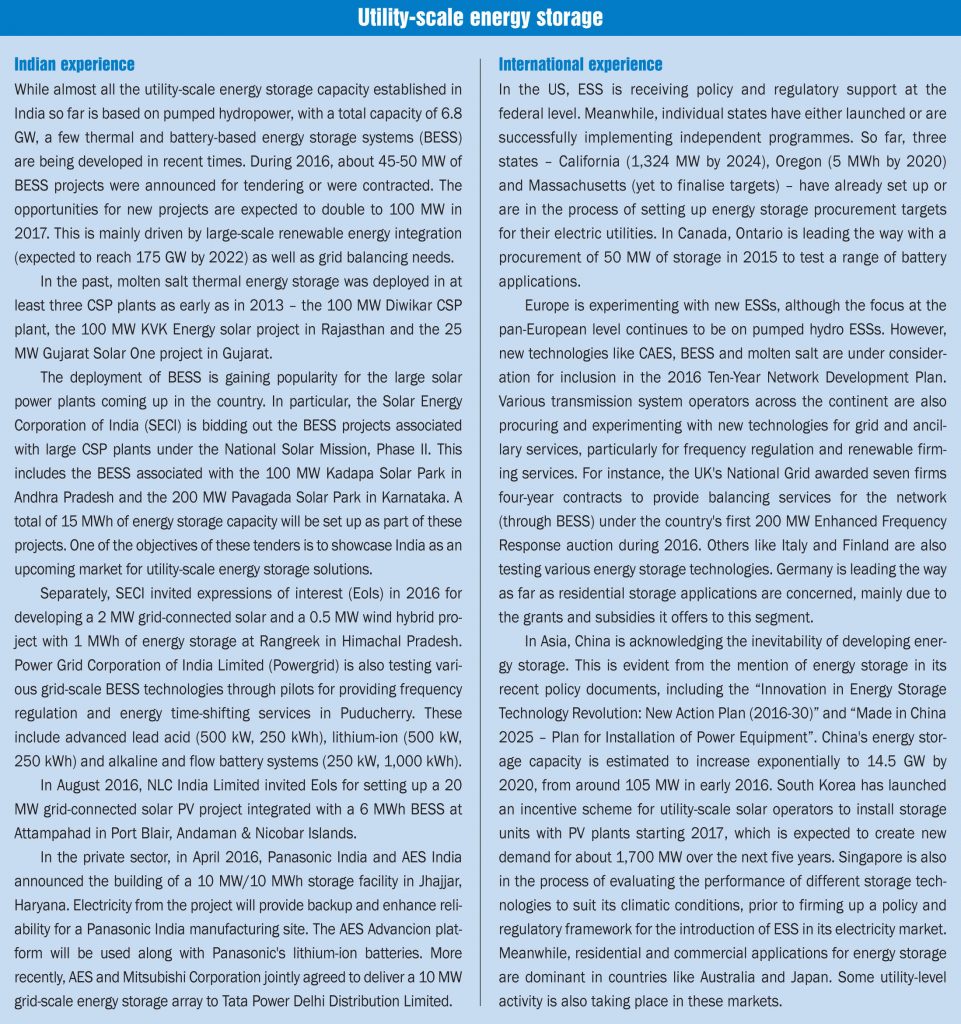