Tariffs for coal-based plants have increased over the years due to the dependence on imported coal, which is relatively more expensive than domestic coal, and delays in the execution of projects, which led to an increase in capital costs. Recently, several developments, including the augmentation of domestic coal supply and rationalisation of coal linkages, have helped lower the cost of coal-based power generation. However, several others, such as an increase in domestic coal prices, more stringent environment norms and revised freight charges, have put an upward pressure on costs. 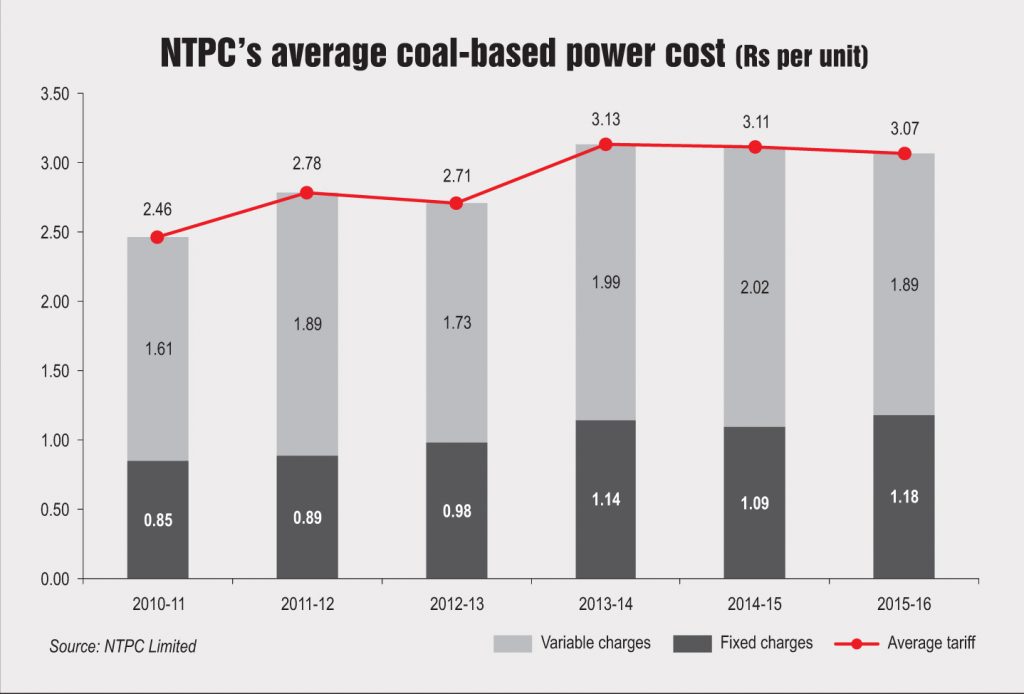 Power generation costs depend mainly on the capital costs, operations and maintenance (O&M) costs and fuel costs, with fuel costs comprising the single biggest component. The overall generation costs of coal-based power plants have been increasing over the past few years.

While the substitution of imported coal with domestic coal led to a decline in fuel costs in 2015-16, there has been an upward pressure on the cost of generation in 2016-17 due to a revision in coal prices by CIL and coal freight charges by the Ministry of Railways (MoR). CIL revised the pithead run-of-mine prices of all grades of non-coking coal in May 2016, raising the price of thermal grade coal supplied to the power sector by 15-18 per cent. As per ICRA, this is estimated to increase the cost of generation of coal-based power plants by 9-10 paise per unit. While generating companies and independent power producers (IPPs) with cost plus-based power purchase agreements (PPAs) would be able to pass on this increase to the power procurer, the ability of IPPs with competitive bid-based PPAs to pass on such an increase depends on the extent to which the energy charge in the bid tariff can be escalated because of such reasons.

Further, the MoR revised freight charges in August 2016, leading to an increase of 7-14 per cent in transportation costs for plants located 200-700 km away from the mines and a reduction of 4-13 per cent for those situated beyond 700 km. The impact of these revisions on the variable cost of power will be specific to each plant, depending on the distance from the associated coal mine. In addition, the Railway Board has notified the levy of a coal terminal surcharge of Rs 110 per tonne (Rs 55 per tonne at both the loading and unloading points) for distances beyond 100 km. As per ICRA, the levy of the coal terminal surcharge would lead to an increase in the variable cost of generation by 7-8 paise per unit.

For power plants dependent on imported coal, the recent rise in international coal prices and the depreciation of the Indian rupee are expected to have a negative impact on their cost of generation. The average price of Indonesian, South African and Australian coal increased from $51-$53 per tonne in April 2016 to $69 per tonne, $84 per tonne and $93 per tonne respectively in October 2016.

With regard to capital costs, most of the coal-based power projects that have been under implementation since 2008 have experienced a significant increase in capital costs owing to delays in execution due to challenges related to land acquisition, environmental clearances and funds access. For projects using imported boiler, turbine and generator equipment, the depreciation of the Indian rupee has been one of the major reasons for the escalation in capital costs. Over 80 per cent of the projects currently under implementation are already delayed, which has resulted in an overall cost overrun of about Rs 600 billion. As per ICRA, for a sample of projects with an aggregate capacity of 35 GW, the average escalation in the capital cost is 38 per cent.

With revised pollution norms notified by the Ministry of Environment, Forest and Climate Change in December 2015, the pressure on the fixed cost of generation has increased further. In order to comply with the new standards, coal-based power projects are required to invest in additional equipment, which would cost Rs 6 million to Rs 10 million per MW as estimated by ICRA, based on the age of the plant. The additional investment is likely to result in an increase in the capital cost of generation for these projects by 13 paise to 22 paise per unit, depending on the capex incurred. The revised norms are also likely to result in additional O&M costs.

Over the past two to three years, there has been a slowdown in competitive bidding for long-term power procurement by utilities. State-owned discoms have been buying power at a cheaper rate from trading markets as compared to signing fixed rate PPAs with thermal power plants. As per ICRA estimates, about 25 GW of capacity in the private IPP segment  still  does not have long-term PPAs and remains exposed to price and volume risks in the short-term trading market, given the absence of long-term PPA bids. This has also impacted the ability of such IPPs in securing fuel supply agreements since tying up capacity under long-term PPAs is one of the conditions for such agreements. Only four states – Andhra Pradesh, Kerala, Telangana and Uttar Pradesh – have invited bids to sign long-term PPAs in the past two to three years. The tariffs discovered continue to remain relatively high – in the range of Rs 4.0-Rs 4.3 per unit. The Ministry of Power notified the guidelines for short-term procurement of power in April 2016 and made it mandatory for all procurers to procure short-term power by using the Discovery of Efficient Electricity Price (DEEP) e-bidding portal. As against the tariffs quoted under Case I bidding, which were in the Rs 4 per unit range, the tariffs in the bids under DEEP were lower, mainly in the range of Rs 2.50 to Rs 3.50 per unit.

In a positive development in the tariff compensation issue, the Central Electricity Regulatory Commission (CERC) issued the final order on tariff relief for the imported coal-based projects of Adani Power Limited and Coastal Gujarat Power Limited. The CERC has allowed tariff relief under force majeure to both the projects for the rise in coal prices due to a change in Indonesian regulations. However, the implementation is subject to the approval of the Supreme Court. The relief is expected to have limited impact on retail tariffs in the procuring states. As per ICRA, the impact of this relief will vary from 1 paise to 6 paise per unit, with a relatively high impact on the discoms of Gujarat and Haryana. Consequently, timely pass-through of the additional cost by discoms under the fuel and power purchase cost adjustment framework will be crucial to prevent their cash flow position from getting adversely affected.

Despite the recent hike in domestic coal prices and railway freight rationalisation, domestic coal-based plants remain the cheapest source of power supply in India. Hence, coal-based generation is expected to continue to remain the major source of power supply to meet baseload power requirements in the foreseeable future. With the improved availability of coal from domestic sources and various initiatives taken by CIL to augment domestic coal output, the dependence on imported coal is expected to gradually decrease, which will be beneficial for coal-based power generation projects. Further, the Ujwal Discom Assurance Yojana, the restructuring package for the distribution segment, is likely to resolve the issue of poor power offtake by discoms. However, the cost of generation is expected to remain under pressure for recently commissioned/upcoming IPPs due to a significant rise in capital costs. n

With inputs from a presentation by Sabyasachi Majumdar, Senior Vice-President, ICRA Limited