North Eastern Electric Power Corporation Limited (NEEPCO) was incorporated in 1976 with the objective of harnessing the enormous power potential of the country’s north-eastern region (NER). The company has come a long way since then. In February 2016, the central government-owned utility fully commissioned the NER’s third largest gas-based power project, the 101 MW Monarchak combined cycle power plant (CCPP), in Tripura. The project was originally scheduled to be commissioned in 2005; however, it faced major delays due to gas procurement issues between NEEPCO and the Oil and Natural Gas Corporation.

The utility has scaled up its generation capacity to 1,287 MW. As of March 2015, it had a share of about 36.82 per cent in the total installed capacity of the Northeast across the thermal, hydro and renewable segments. Besides, it contributed over 38 per cent to the total generation in the region during 2014-15.

Further, new projects aggregating 17,285 MW are at various stages of development and conceptualisation.  About 89 per cent of this capacity falls in the hydropower segment.  There is also a focus on the development of the region’s renewable potential and diversification into coal-based projects.

comes from three hydroelectric plants (HEPs) with a capacity of 755 MW, four gas-based projects aggregating 527 MW and a 5 MW solar photovoltaic (PV) project. The company’s HEPs include the 405 MW Ranganadi HEP (Arunachal Pradesh), the Northeast’s largest HEP, the 275 MW Kopili HEP (Assam) and the 75 MW Doyang HEP (Nagaland). The Kopili HEP comprises three power stations – the Kopili power station (4×50 MW), the Khandong power station (2×25 MW) and the Kopili Stage II power station (1×25 MW). The HEPs cumulatively generated 2,187 MUs during April-December 2015, about 23 per cent higher than the 1,775 MUs generated during the corresponding period in 2014. However, as per the Central Electricity Authority’s (CEA) generation statistics, the company’s generation from its hydro projects declined at a compound annual growth rate (CAGR) of about 6.5 per cent between 2010-11 and 2014-15.

Of the Agartala extension project, two steam turbine gas units – Unit 1 and Unit 2 of 25.5 MW each – began commercial operations in September 2015 and July 2015 respectively. The project was approved in June 2011 at a cost of Rs 2.97 billion and the engineering, procurement and construction contract was awarded to Thermax Limited in July 2011.

In December 2015, NEEPCO also commenced commercial operations of the 65.42 MW GT unit of the Monarchak CCPP. The remaining 35.58 MW of the project capacity was recently commissioned, in February 2016. Bharat Heavy Electricals Limited (BHEL) was the principal contractor for the project. NEEPCO will supply unscheduled power from the plant at Rs 3.88 per unit until the finalisation of the tariff by the Central Electricity Regulatory Commission.

As per the CEA, between April and December 2015, the Kathalguri CCPP, the Agartala GT project and the Monarchak CCPP (operating at monitored capacities of 291 MW, 109.5 MW and 65.4 MW respectively) cumulatively generated around 1,900 MUs. In terms of performance, during 2014-15, the Kathalguri CCPP and the Agartala GT project operated at plant load factors (PLFs) of 68.3 per cent and 84.54 per cent respectively as compared to the national average PLF of 20.79 per cent for gas-based power plants. Firm fuel supply agreements with public sector gas companies have helped NEEPCO maintain significant PLFs even in times of fuel shortages.

The company’s solar PV project is located on the premises of the Monarchak CCPP and is the largest grid-interactive solar plant in the NER. The plant was implemented by BHEL at an estimated cost of Rs 428.9 million and has been operating commercially since February 2015.

In terms of year-on-year performance, NEEPCO’s total income increased by about 9.92 per cent in 2014-15 from

At present, NEEPCO has 770 MW of hydro capacity under construction. This primarily comprises the 600 MW Kameng HEP (Arunachal Pradesh), the 110 MW Pare HEP (Arunachal Pradesh) and the 60 MW Tuirial HEP (Mizoram), which are expected to be commissioned in March 2017, March 2016 and October 2016 respectively. Apart from these projects, NEEPCO also has about 14,628 MW of planned hydro capacity in the pipeline. Of this, around 80 per cent (11,700 MW) will be set up in the form of joint venture (JV) projects and the remaining 20 per cent (2,928 MW) as ownership projects. 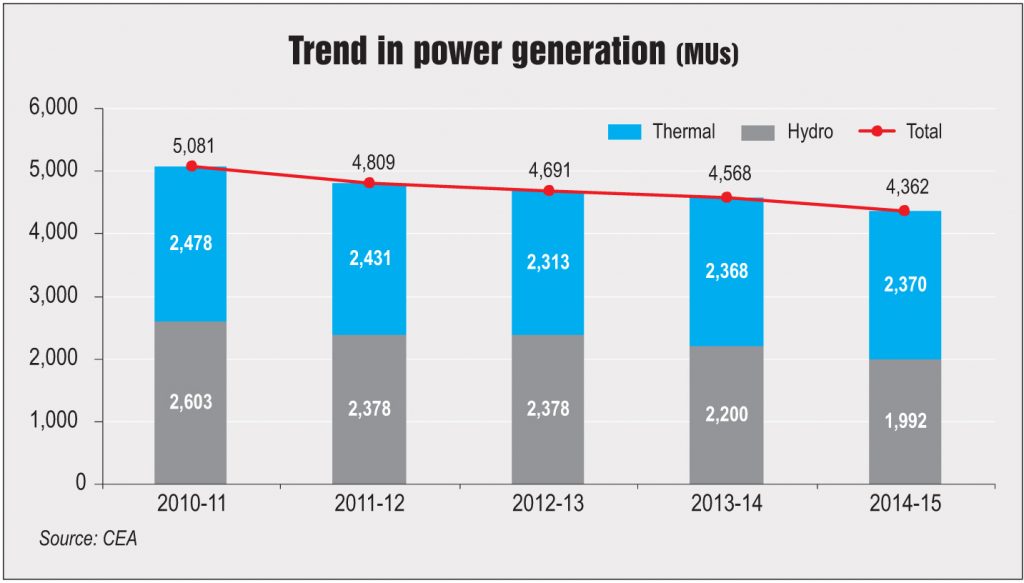 In the thermal segment, NEEPCO has an upcoming capacity of 1,880 MW, comprising two coal-based power projects – the 500 MW Garo hills thermal power project (TPP) in Meghalaya and the 1,320 MW Margherita TPP in Assam – and two gas-based CCPPs – the 35 MW Rokhia project and the 25 MW Baramura project in Tripura.

NEEPCO has formulated a strategic business plan to install 2,500 MW of renewable energy generation capacity during the period 2015-16 to 2019-20 in order to fulfil its commitment made at RE-Invest 2015. Also, the company has shown interest in setting up solar ultra mega power projects at Kargil and Leh.

At present, the company’s project pipeline in the renewable energy segment consists of three grid-interactive solar power plants aggregating 7 MW of capacity in Assam, which are in the pre-construction phase. In addition, NEEPCO’s JV projects under the renewable category include a 50 MW grid-interactive solar power project in Andhra Pradesh and a 100 wind power project in Gujarat.

The geotechnically sensitive terrain, inaccessible geographic locations and inhospitable climatic conditions are major impediments in the operation and efficiency of power plants in the Northeast. Besides hampering the operations of the existing projects, these factors also hinder the execution of the company’s expansion plans. Transportation and logistics of overdimensional power equipment is another issue of concern for the company.  NEEPCO also needs to resolve issues pertaining to the procurement of natural gas. Delays in natural gas supply along with other factors have lowered generation in the past few years. The Monarchak CCPP was delayed for almost 13 years due to gas supply issues.

NEEPCO is poised to play an important role in tapping the region’s huge power potential. This can be attributed to its vast experience in the operation of power projects in the Northeast, despite bottlenecks. Timely execution of the company’s expansion plans will not only boost the region’s power generation capacity, but also contribute towards its holistic development.