One of the important challenges for the country is to ensure energy availability for all. In order to meet the power demand, a number of steps are being taken on both the supply and demand side. Focus on energy efficiency and conservation has been one such measure on the demand side. With the aim to make energy-intensive sectors more efficient, the Bureau of Energy Efficiency (BEE) launched the Perform, Achieve and Trade (PAT) scheme in 2012, under the National Mission on Enhanced Energy Efficiency.

PAT is a market-based mechanism to enhance the cost effectiveness of improvements in energy efficiency in energy-intensive large industries and facilities. It is done through the issuance of energy savings certificates (ESCerts) traded between overperforming and underperforming units identified as designated consumers (DCs).

In its first phase (2012-15), the scheme covered 478 DCs. The second phase (2016-19) is currently under implementation and will cover 621 DCs across 11 sectors. The scheme mandates DCs to achieve a prescribed reduction in their specific energy consumption. The quantified energy savings are then converted into ESCerts. When a DC achieves and surpasses its target, it is permitted to sell its excess savings in the form of ESCerts. Moreover, if a DC fails to achieve its targets, it necessarily needs to purchase the appropriate number of ESCerts to meet its energy savings targets. In 2016, in order to facilitate the trading of ESCerts, the Central Electricity Regulatory Commission notified regulations for the trading of ESCerts on power exchanges. A look at the status of the scheme, the outcome from Phase 1 and the way forward…

Under Phase I of PAT, 478 DCs were covered across eight sectors such as aluminium, cement, chlor-alkali, fertiliser, iron and steel, paper and pulp, thermal power and textiles. These units cumulatively consumed close to 165 million tonnes of oil equivalent (mtoe) of energy. Overall, the units were required to cumulatively achieve a 4.05 per cent reduction in their average energy consumption by the end of the cycle, or an annual reduction of around 6.686 mtoe of energy and approximately 23 million tonnes (mt) of carbon dioxide.

The energy savings target was exceeded by 29 per cent in this phase, with a total savings of about 8.67 mtoe from 427 DCs along with a reduction of 31 mt of carbon dioxide. Sector-wise, except thermal power generation plants, all sectors managed to significantly over-achieve the target.

Based on the experience of PAT Cycle I, several changes have been incorporated for the future cycles. The timeline for the scheme has been revised. PAT will now follow a rolling cycle, wherein the commencement of a new cycle will not wait until the completion of the previous cycle. Further, in order to provide sufficient time for evaluating energy savings, the duration of the monitoring and verification phase has been kept to four months, scrutiny by the state designated agency to 45 days, BEE scrutiny to two months, etc. Also, the methodology for setting the savings targets has been revised to include historical trends of sector-specific efficiency improvements, national policy objectives and global best practices. On the other hand, for baseline data, single-year-based data against the average historical data across years will be used. Further, the baseline data will also accommodate variations in capacity utilisation across sectors. Some of the other changes brought in the scheme are the removal of certain rules like the early issuance of ESCerts, which were found to be irrelevant and not availed of by any DC in PAT I. BEE is also organising workshops and developing sector-specific pro formas to educate the new DCs on subjects like data collection, audit verification, normalisation, etc.

The second phase commenced in April 2016 and the baseline year for it has been taken as 2014-15. The period for the second cycle is 2016-19, and the assessment year is 2018-19. The objective of Cycle II is to expand the ambit of the scheme so that industrial units getting covered in this phase account for more than or equal to 50 per cent of the energy consumption in the country. Accordingly, PAT Cycle II covers 621 DCs in total. In addition to the 478 DCs, this phase will include more number of industrial units from the existing sectors (about 89 new DCs from iron and steel, paper and pulp, cement, textiles, TPP, aluminium, chlor-alkali and fertiliser sectors). Further, it will include more units (about 84 DCs) from three new sectors (railways, electricity discoms and refinery). The combined energy consumption of the 11 sectors is estimated to be 227 mtoe, while the target for energy savings has been set at 8.87 mtoe. 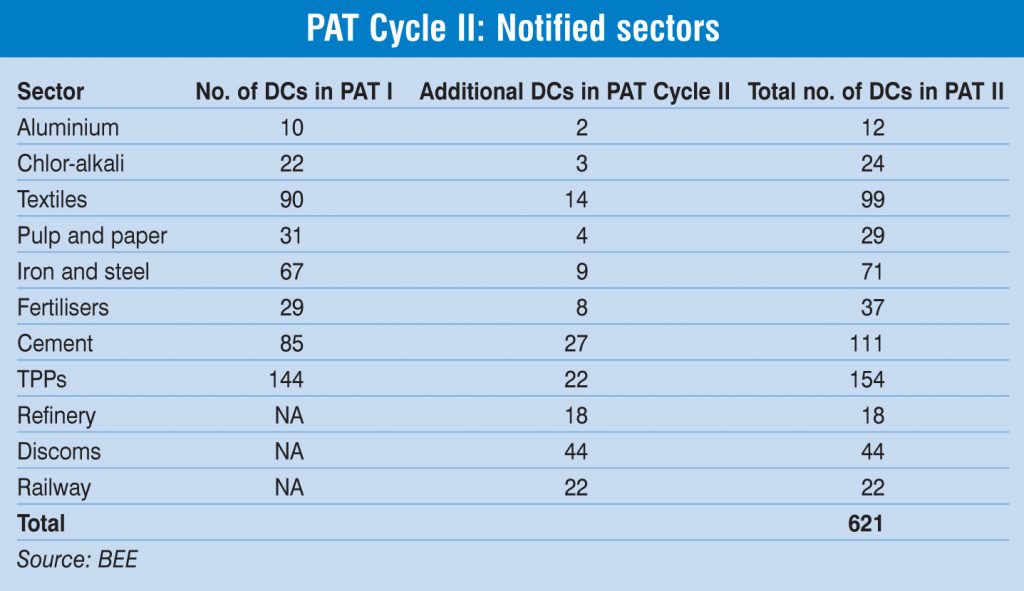 Clearly, the opportunity for energy savings is immense across various industries, given that the achievements under Cycle I have been well in excess of the targets set. With the successful implementation of PAT Cycle I, BEE is now geared up to efficiently implement PAT Cycle II. With the widening and deepening of the PAT scheme, the outcome from this cycle is expected to be interesting.