In order to promote the efficient use of domestic coal, the Ministry of Power (MoP), on February 20, 2017, announced the methodology for the use of domestic coal allocated to states, in generating stations run by independent power producers (IPPs). This is in continuation of the MoP’s previous notification, released in June 2016, wherein it had allowed flexibility in the utilisation of coal among state and central generating stations. At the same time, it had announced its plan to formulate a separate methodology for IPPs, and directed the Central Electricity Authority (CEA) to notify a methodology for flexible coal utilisation in four other possible scenarios. Based on the MoP’s directions, the CEA issued the methodology for flexible coal use in four of five possible scenarios. These include flexibility in the use of coal aggregated with the state either in its own generating stations (Case 1) or in stations of another state’s utilities (Case 2), or in central generating stations (CGSs) (Case 3) and the use of coal assigned to CGSs at their own plants or at other efficient plants (Case 5).

The methodology for Case 4 involving IPPs was left out by the CEA. This has now been announced by the MoP. In this case, the state supplying coal will invite tariff bids from IPPs for the use of domestic coal from its aggregated coal allocation and the IPPs will supply power to the state in lieu of the transfer of such coal.

The idea is to bring down generation costs as the policy allows domestic coal to be utilised by the most efficient power plants. Further, there can be savings on account of transportation in cases where coal can be transferred to power stations closer to the allocated block.

General principles: The energy generated under the Case 4 arrangement will be treated as transfer of coal. The landed power cost from the IPP (including transmission charges and losses), which is the price bid at the buyer’s (state) periphery, must be lower than the variable cost of the state generating station whose power is to be replaced by the power supplied by the IPP. The IPP will have to make its own assessments about transmission corridor availability prior to the submission of price bids. A state-notified nodal agency will conduct the bidding process.

The buyer will have to make a reference to the Ministry of Railways (MoR) regarding the operational feasibility of coal transportation to the shortlisted IPPs after the opening of the requests for qualification (RfQs). The request for proposal (RfP) bids of only those qualified bidders will be opened that have been approved for the same by the MoR. The techno-commercial feasibility of the transaction (including the availability of transmission capacity) must be worked out beforehand and examined by the IPP. The use of coal by the central sector in IPPs will be taken up separately.

E-bidding process: The buyer can procure power in lieu of coal either by directly using the e-bidding portal or through an authorised representative. The bidding will be carried out only through the e-reverse auction (e-RA) procedure, which is a two-stage process comprising the RfQ stage and the RfP stage.

Prospective bidders have to be registered on the portal, for which a one-time non-refundable fee will be applicable. For participation in the e-bidding process, a requisite fee of Rs 500 per MW for the maximum capacity, excluding taxes, will be charged. However, this amount will be refunded to non-successful bidders after the completion of the process. The successful bidders will be charged only for the allocated quantum and the balance will be refunded. Both the RfQs and RfPs will be invited at the same time. However, RfP bids or initial price offers (IPOs) of only qualified bidders will be opened. 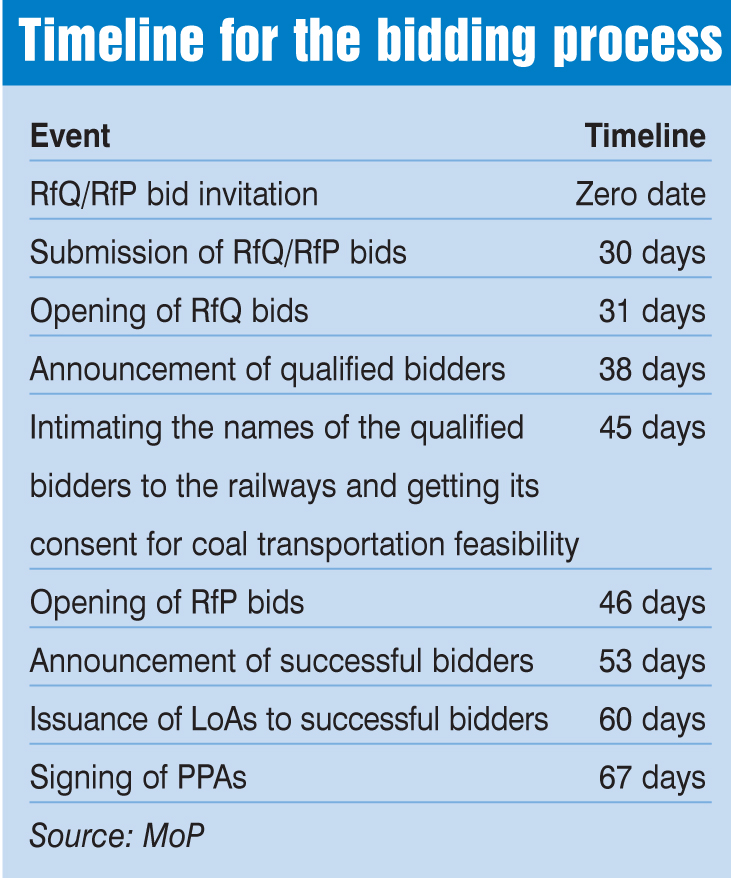 Bidding requirement: The buyer must specify the power requirement, its duration, delivery point and the date of supply commencement along with the details of coal availability (including the source, quantity, quality and price) and the ceiling tariff. The ceiling tariff will be the variable generation cost of the state power station whose power is to be replaced.

Preparation of bids: To qualify for the RfQ stage, the bidder has be an IPP with a commercially operational coal-based station with units of 200 MW and above, and must have an operating capacity equal to or more than the quantum of power required by the buyer.

Bidders are required to submit an earnest money deposit (EMD) for the capacity they intend to offer at the rate of Rs 30,000 per MW on a round-the-clock basis (30 days, 24 hours). This amount will be reduced on a pro-rata basis in case bids are invited on an hourly basis. The EMD will be forfeited if the bidder withdraws the bid during the bid validity period, that is, up to the signing of the power purchase agreement (PPA), or for the non-submission of the contract performance guarantee (PG) by successful bidders. The refund of the EMD will be made to non-successful bidders within 10 days of the bid validity period expiry and to successful bidders after they furnish the PG. The bidder has to quote for a minimum bid quantity of 100 MW or 50 per cent of the required quantity, whichever is lower.

For evaluation, bidders will be arranged in an ascending order of the quoted price bids (below the ceiling tariff), and the first selected bidder will be the one with the least quoted tariff. If the power offered by this bidder is equal to the required power by the state, then it will be the successful bidder. Otherwise, it will be the first successful bidder and the balance power requirement will be procured from the subsequent selected bidders until the requirement is met. The subsequent bidders, however, have the option to reject the quantum of balance power being offered if it is less than the quantum of power available with them. The buyers can accept or reject the tariff discovered through the process and annul the process without giving any reason.

The entire bidding process must be carried out electronically. To ensure competitiveness, there need to be at least two bidders for each requisition. After the opening of the IPOs, the shortlisted bidders will be intimated individually through system-generated emails. The e-RA process will start within 120 minutes of the opening of the IPOs. The bidders have the option to reduce the quoted tariff by 1 paisa or its multiples, and to increase the quoted quantum of power by 1 MW or its multiples up to the corresponding value of the submitted EMD. During this process, the prevailing lowest tariff will be visible to all the bidders. After the e-RA process, the bidders will be ranked in accordance with the tariff offered in ascending order. After selection, a letter of award (LoA) will be issued by the buyer, which needs to be signed and returned by the selected bidders. The PPA must be signed within 15 days thereafter. However, if the timelines are not met or if the successful bidder fails to acknowledge the LoA or sign the PPA, the procurer may forfeit the EMD/PG.

Timelines: The entire bidding process from the invitation of the RfQ and RfP bids to the signing of the PPA must be completed within 67 days.

Performance security: Successful bidders are required to furnish bank guarantee within 10 days of the selection date, at the rate of Rs 200,000 per MW per month (30 days, 24 hours) during the contract period. The PG for power procurement on an hourly basis will be calculated on a pro-rata basis.

Tariff approval: The quantum of power procured and tariff discovered through the bidding process must be within the annual revenue requirement approved by the appropriate commission and the same will be considered to be deemed approved by the commission.

Responsibilities: The seller is responsible for obtaining open access as well as for bearing the charges of load despatch centres, as well as the applicable cess and taxes on coal and transportation. The buyer must make arrangements for coal supply and power procurement, assist the seller in coordination with the coal company and the transporter, and bear third-party sampling charges as well as any increases in coal costs and taxes. The buyer also has to pay a compensation of 10 per cent of the tariff for the quantum of shortfall in the actual schedule below 80 per cent of the contracted power on a monthly basis.

Tariff payment and payment security mechanism: Tariff settlement must be done on a monthly basis. The buyer needs to open an unconditional, irrevocable and revolving letter of credit (LC) in favour of the seller for the contract period or 12 months, whichever is less. The amount in the LC must be two times the average monthly billing amount.

Coal quantity assessment and reconciliation: For the evaluation of the quantum of coal to be allocated to the successful bidder, the buyer must use information on the gross calorific value of coal for the grade specified by the coal company and the gross station heat rate (kCal per kWh) provided by the bidder. Quarterly reconciliation must be carried out with respect to coal consumed for generation and supply of electricity corresponding to the quality and quantity of coal at the loading end. Any excess or shortfall in the quantity should be adjusted in the next quarter. Further, coal quality at the loading end should be vetted by a third-party sampler.

Defaults, force majeure and dispute resolution: In case of seller defaults by way of delays or shortfalls in the supply of power or the use of coal for other purposes, the buyer may terminate the agreement after giving  15 days’ notice. In this case, the seller has to pay 10 per cent of the energy that would have been scheduled at the quoted rate for one month or the balance contract period, whichever is higher. A similar payment has to be made by the buyer in case it defaults in making payments to the seller or the coal company or in opening an LC of the requisite amount within 30 days from the due date.

During force majeure events, including restrictions imposed by load despatchers in scheduling, natural calamities and transmission constraints, no coal transfer will be made to the seller. Disputes will be resolved by the inter-ministerial subgroup constituted for the purpose under the similar flexibility scheme for the state and central gencos. Commercial disputes will be decided by the appropriate commission.

The policy allows for amendments to be made on the basis of the operational experience gained during its implementation. Through this policy, the MoP has clarified its policy stance and its intent to improve the efficiency of coal-based power generation across sectors. If implemented in its true spirit, the policy is expected to bring about a significant reduction in the cost of power generation.