Madhya Pradesh Power Transmission Corporation Limited (MPPTCL), which was set up in 2001 and is responsible for electricity transmission in the state, has been an early adopter of new technologies. A pioneer in supervisory control and data acquisition (SCADA) implementation, it has installed this system for monitoring, operation and control of the transmission system of the entire state, making it the first state transco to do so. MPPTCL has also implemented an automatic demand management system (ADMS), one of the most advanced systems in the country. It was also the first state utility to adopt an insulated aerial platform for the hotline maintenance of transmission lines.

The company has a good operational performance record with a normative system availability of 98.16 per cent to 99.44 per cent since its inception. Its transmission losses have been at 3 per cent or below in the previous three fiscals. Today, the company operates 31,363 ckt. km of transmission lines and 316 substations, with an aggregate capacity of 46,923 MVA. MPPTCL is also one of the few utilities to adopt new business models by developing transmission projects through the public-private partnership mode.

The transco has outlined a significant capex of Rs 63.73 billion for the next five years (2017-18 to 2021-22), and is confident about adding more than 8,000 ckt. km of transmission line length and 17,000 MVA of substation capacity. The biggest priority areas for MPPTCL are expected to be developing infrastructure for the evacuation of renewable energy. Besides developing green energy corridors for upcoming renewable energy plants in the state, it is also tasked with project management consultancy support for the evacuation infrastructure of the upcoming 750 MW Rewa ultra mega solar project. Network upgradation and modernisation are also on the cards with the installation of high-temperature low-sag (HTLS) conductors, monopoles and gas-insulated substations.

The SCADA system implemented by MPPTCL comprises three control centres – at Jabalpur, Bhopal and Indore – and integrated around 330 extra high voltage (EHV) substations. Thus, effective control and operation of all the EHV substations through real-time information is being carried out. The local data monitoring system installed at each EHV substation has a mini SCADA.

Further, the ADMS installed by the transco is being used to meet the requirement of automatic demand management like rotational load shedding in all the three distribution companies of Madhya Pradesh, using transmission SCADA through approximately 3,000 feeders at the 33 kV level emanating from EHV substations.

MPPTCL has also installed an emergency restoration system (ERS), which plays a vital role in disaster management for the restoration of 400 kV, 220 kV and 132 kV lines. When a breakdown occurs, both circuits are restored using various bypass ERSs.

The insulated aerial platform, which is used for conducting and following hotline maintenance operations on the 132 kV, 220 kV and 400 kV single circuit and double circuit transmission lines, has been another important initiative. The insulated aerial platform has a working height of 38.1 m and a side reach of 15.9 m, and can be rotated by 360 degrees. 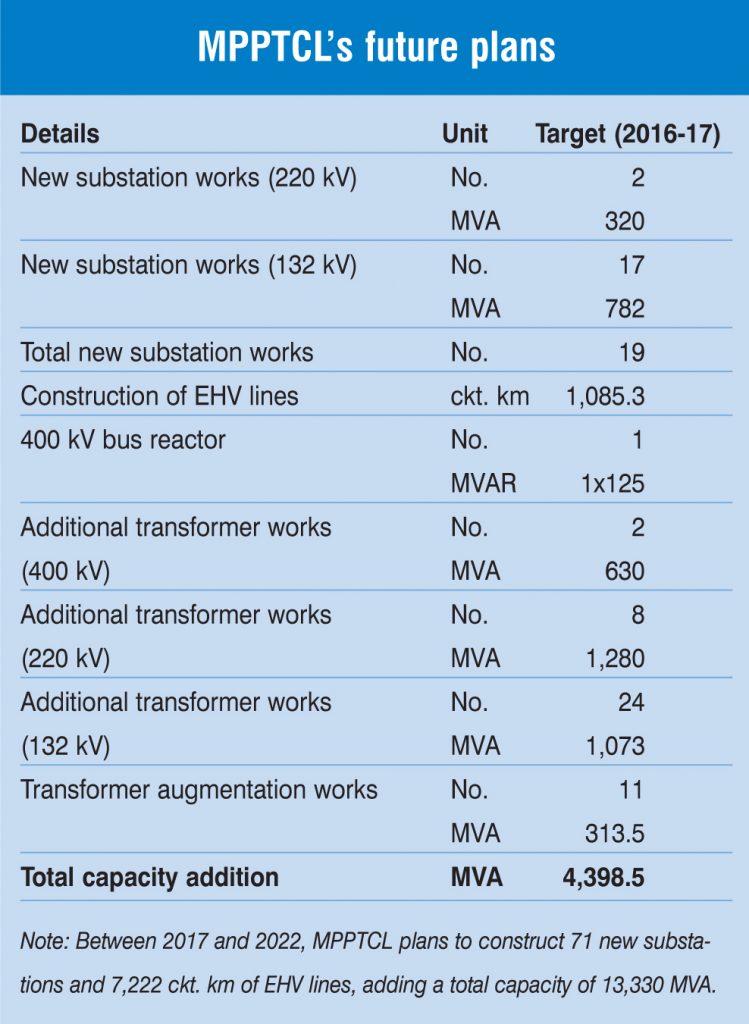 One of the key investment areas identified by the transco is green corridors. MPPTCL anticipates a total capacity of 5,847 MW of power from renewable sources to become available over the next five years. The company has conducted system studies and identified transmission system strengthening and interconnection works to evacuate this power. The estimated cost for the transmission system strengthening projects will amount to Rs 35.75 billion, divided into two phases. Phase I, at an estimated cost of Rs 21 billion, includes the addition of 11 substations and 2,882 ckt. km of transmission lines. Phase I will be funded by a soft loan from German bank KfW (40 per cent), a grant from the National Clean Energy Fund (40 per cent) and the remaining 20 per cent will be contributed by the Madhya Pradesh government. In Phase II, expected to cost Rs 14.75 billion, six substations and 1,357 ckt. km of transmission lines will be added.

MPPTCL will be providing project management consultancy support for the development of internal evacuation systems for two ultra mega solar projects coming up in Madhya Pradesh – the Rewa Ultra Mega Solar (RUMS) project and RUMS II. RUMS, sanctioned by the Ministry of New and Renewable Energy, will be set up in Rewa district and will be the largest solar project in the country at a single location. The project will be executed by Rewa Ultra Mega Solar Limited, a 50:50 joint venture between Madhya Pradesh Urja Vikas Nigam and Solar Energy Corporation of India. Power generated at RUMS will be evacuated by three pooling substations, interconnected to a Powergrid Corporation of India Limited substation. The three pooling substations are proposed to be constructed by MPPTCL at a cost of Rs 2.4 billion, which will be borne by Rewa Ultra Mega Solar Limited.

MPPTCL also plans to undertake renovation and modernisation (R&M) of old substations. It received a grant of Rs 927 million in March 2016 from the Power System Development Fund (PSDF) to renovate and modernise old EHV equipment of 400 kV and 220 kV capacity substations. The R&M works are to be completed by 2017-18. The project cost is Rs 1.03 billion and the PSDF funding will cover 90 per cent of this amount, with the remaining being contributed by the Madhya Pradesh government and MPPTCL.

Additionally, to counter the challenges being faced by the company, it is implementing certain new technologies. MPPTCL has identified a few lines where normal conductors are to be replaced with HTLS conductors. It has also planned to utilise the existing corridor of 132 kV North Zone-Jaitpura line to set up 220 kV multi-circuit monopoles. Gas-insulated substations are also proposed to be set up.

According to MPPTCL, some of the key challenges faced by it are difficulties in acquiring land and right of way, creating long distance high capacity transmission lines to enable minimum cost per MW of transfer, and minimising adverse impacts on the environment in a profitable manner. Furthermore, with scarce land availability, there is a growing need for reducing land use for setting up transmission systems, particularly in urban areas. Another key challenge is flexibility in line loading and regulation of power due to a wide variation in demand on a daily as well as a seasonal basis. There is an increased need to regulate power flow in the transmission network for grid security and optimisation.

These challenges notwithstanding, MPPTCL’s proactive initiatives promise a positive future outlook for the transmission company.