Over the past few years, the number of substations installed at the transmission level has increased significantly, with the overall capacity registering a compound annual growth rate (CAGR) of 12.7 per cent between 2011-12 and 2015-16 to reach 643,949 MVA. During 2015-16, a total of 62,850 MVA was added to the transmission network, marking an increase of 10 per cent in the total capacity.

As per the Central Electricity Authority’s (CEA) draft National Electricity Plan Transmission 2016, the total substation capacity is expected to reach over 979,637 MVA by 2022, recording a CAGR of over 7 per cent during the five-year period.

Power Grid Corporation of India Limited (Powergrid) leads the transmission segment, with its investment forming a major proportion of the total investment expected in the segment. The utility carries more than 45 per cent of the power generated in the country. Powergrid incurred a capital expenditure of Rs 1,060 billion during the five-year period spanning from 2011-12 to 2015-16. During the last four years of the Twelfth Plan period, Powergrid accounted for 65 per cent of the total substation capacity addition in the country. It has set a capital expenditure target of Rs 225.5 billion for 2016-17, of which about Rs 179.08 billion has been incurred as of December 2016.

An analysis of Powergrid’s under-construction substation capacity shows that the utility plans to commission over 100,000 MVA of capacity till 2019-20. Of this, about 65 per cent of addition is likely to take place at the 765 kV level followed by the 400 kV level (35 per cent). In addition, about 9,000 MW of 800 kV high voltage direct current (HVDC) substation capacity is under implementation. The utility has envisaged a capex of over Rs 1,000 billion over the next four years. Some of the key ongoing projects of the company are the North East/ Northern Western Interconnector-I Project, Part-A of Transmission System for the Gadarwara Super Thermal Power Station (STPS), system strengthening for IPPs in Chhattisgarh and other generation Projects in Western region, additional system strengthening for Sipat STPS and Transmission links for the import of power from Bhutan.

At the state level, the Indian government’s Power for All programme is expected to be a key enabler for state transmission utilities to invest in transmission network augmentation and upgradation. In addition, the demand for power is expected to grow with increasing rural electrification and easing of discom financials, following the Ujwal Discom Assurance Yojna. The increased demand will further push for the enhancement of state transmission systems.

Significant network capacity addition is also expected from private transcos. As per the CEA, interstate transmission system projects aggregating Rs 108 billion are likely to be awarded soon as their bidding process has been initiated. 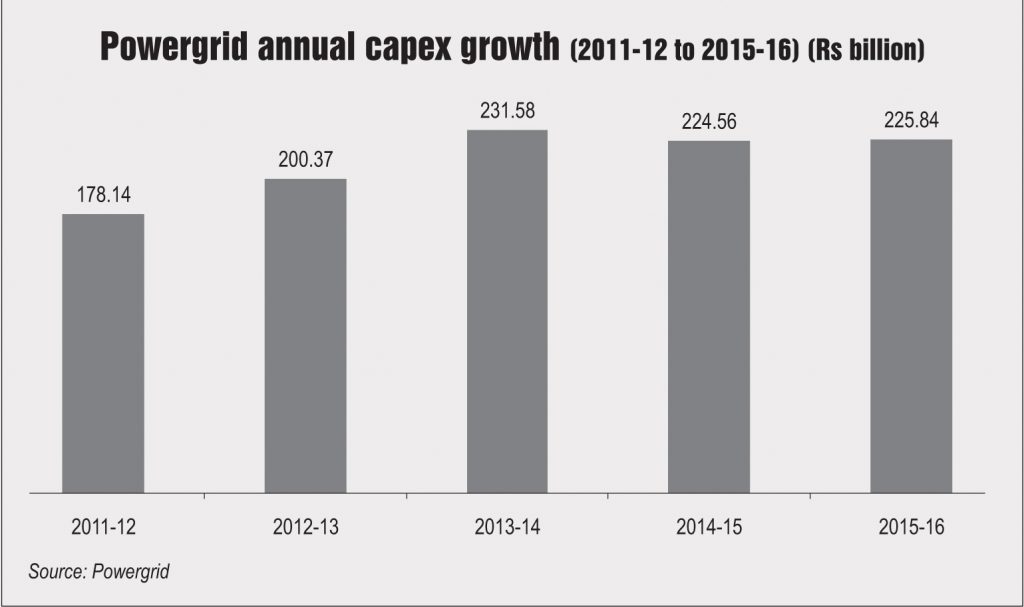 A major growth area in the transmission segment is the ongoing green energy corridors project, which is expected to drive substantial substation capacity addition over the next few years. In order to facilitate the grid integration of large scale renewable energy, two phases of green energy corridors are under implementation. The Green Energy Corridors-I (GEC-I) will connect major renewable energy pockets of Tamil Nadu in the southern region, Gujarat in the western region through Rajasthan, and Punjab in the northern region. Under GEC-I, a total of 34,650 MVA of substation capacity is envisaged to be added at the interstate and intra-state levels. The first phase of the programme is expected to operationalise by April 2017 while the entire GEC-I is scheduled for completion in May 2019.

The GEC-II will evacuate 20,000 MW of capacity from 34 solar parks across 21 states. Under the transmission scheme, over 28,700 MVA of substation capacity will be added along with other transmission infrastructure. Further, the government has recently approved Rs 81 billion to add 20 GW of solar capacity, thus doubling the target to 40 GW. The addition has further increased business opportunities for transmission equipment manufacturers.

A capex of Rs 2,600 billion is expected to be incurred during the Thirteenth Plan period (2017-22), marking a steep increase of 44 per cent from the capex earmarked for the Twelfth Plan period. The capex which will be utilised for the augmentation of the transmission system in the country will be equally divided between interstate and intra-state projects. Of the Rs 2,600 billion, Rs 910 billion is estimated to be invested in substations, constituting almost 35 per cent of the total capex.

During the Thirteenth Plan period, the total alternating current transformation capacity addition is likely to be 292,000 MVA, of which around 39 per cent will be added at the 765 kV level, 35 per cent at the 400 kV level and the remaining at the 220 kV level. Further, around 14,000 MW of HVDC capacity is expected to be added during the period, which will take the total capacity to 30,500 MW. 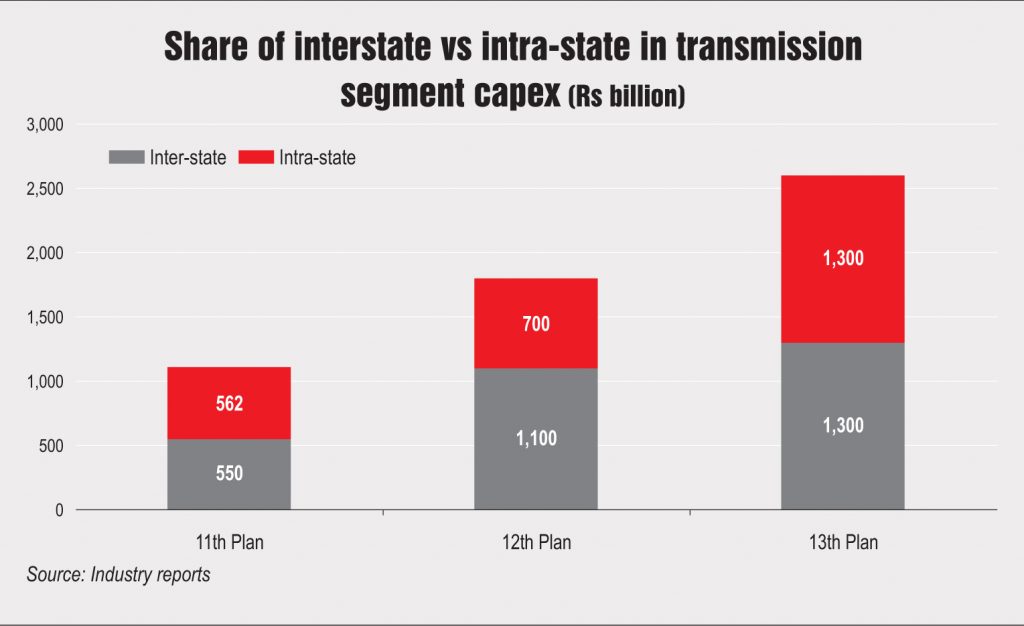 Going forward, with transmission network infrastructure expansion set to pick up pace in the next few years, immense opportunities for technology providers, equipment manufacturers and suppliers will be created.