To accommodate the growing grid capacity, the distribution network is undergoing rapid development, mainly at the substation level. Further, the need for evacuation facilities to meet the ever-increasing demand for power has resulted in considerable growth of the distribution system in the recent past.

According to an analysis of 23 major discoms’ expenditure for 2015-16, about 34 per cent of the total capex was spent on distribution network strengthening, including distribution substation projects. Some of the largest investments in distribution strengthening schemes were made by Paschimanchal Vidyut Vitran Nigam Limited (Uttar Pradesh), Dakshinanchal Vidyut Vitran Nigam Limited (Uttar Pradesh), Hubli Electricity Supply Company Limited (Karnataka) and Punjab State Power Corporation Limited (Punjab). Based on the capex projections of 39 discoms for 2016-17, the estimated expenditure is likely to be Rs 594.07 billion. The Integrated Power Development Scheme (IPDS) and the Deendayal Upadhyaya Gram Jyoti Yojana (DDUGJY) are likely to be the two major drivers for investments.

The IPDS was launched in November 2014 with the aim of increasing the quality and reliability of power supply in urban areas by strengthening the sub-transmission and distribution network, metering feeders, distribution transformers, and deploying smart meters and advanced metering infrastructure. The scheme covers 3,583 towns across 29 states, with Uttar Pradesh, Maharashtra, Madhya Pradesh, Tamil Nadu and Rajasthan accounting for 46 per cent of the project areas in the scheme.

Under the IPDS, the discoms are required to deploy new substations including gas-insulated switchgear (GIS) substations and associated lines. In addition, they have to undertake the expansion of the existing substation infrastructure along with deploying higher capacity transformers. The renovation of existing substations also must be carried out by the respective discoms.

Of the total outlay of Rs 326.12 billion, 29.41 per cent (about Rs 95.9 billion) has been earmarked for new substations and distribution transformers. 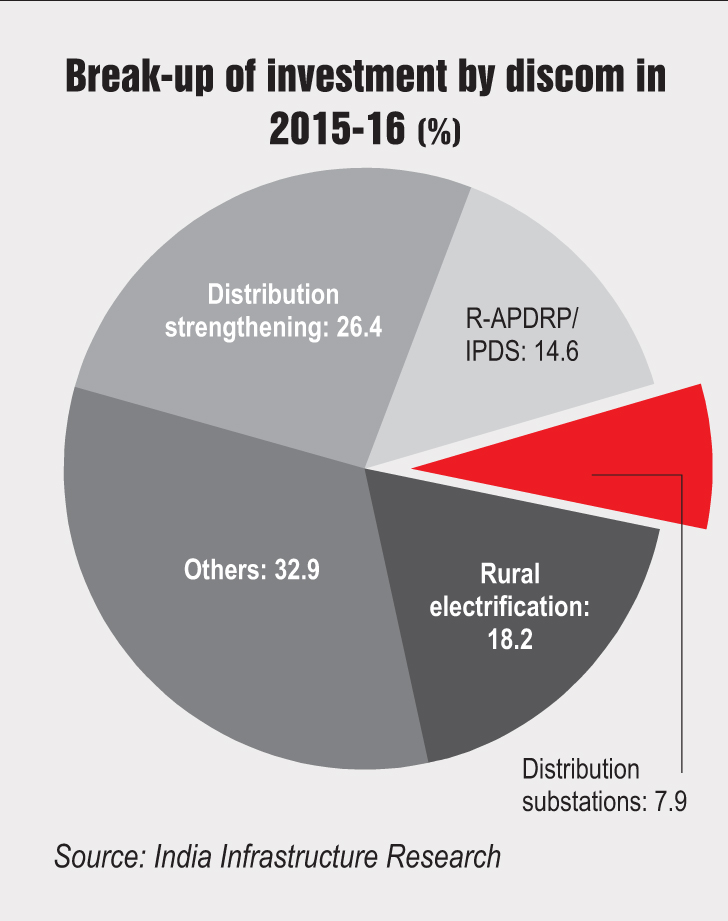 The DDUGJY was introduced in December 2014 with the aim of improving power quality and the distribution infrastructure in rural areas. It provides 100 per cent subsidy to connect all 33 kV and 66 kV substations in the area. The scheme is being executed by state discoms in their respective areas, with a funding liability limited to 5-10 per cent of the total outlay.

The DDUGJY project has a total outlay of Rs 421.1 billion. Of this, Rs 40.45 billion has been allocated for the installation of 1,620 new substations and augmentation of 1,615 33/66 kV substations during the course of the scheme. Uttar Pradesh and Bihar have together been allocated 33 per cent of the total DDUGJY spend while the top five states account for about 48 per cent of the total allocation for the projects.

Given the current state of the power sector in India, discoms will have to carry out their substation plans within the stipulated time to enable better power distribution, especially to areas that are still without proper grid access. However, the success of plans and schemes for substation development is dependent on the teams deployed by discoms for this purpose, the availability of better quality equipment vendors and the procurement of equipment at competitive prices.