According to estimates of the Central Electricity Authority (CEA), as of March 2016, over 37 GW of India’s thermal fleet is more than 25 years old (35.5 GW in the government sector and 1.9 GW in the private sector). This calls for renovation and modernisation (R&M), a technologically and economically viable option to overcome technological obsolescence and achieve optimum power generation. To give a fillip to R&M activity, the government is working on an ambitious programme that involves proactively upgrading old and inefficient thermal projects with new supercritical units of nearly 18.5 GW of capacity. A look at the R&M market potential and prospects for boiler, turbine, generator (BTG) suppliers…

Another key initiative by the government has been the replacement of power plants older than 25 years with new supercritical sets, which has created opportunities for BTG industry suppliers. In July 2016, in consultation with state utilities, the CEA undertook an exercise to identify old and inefficient plants, which could be replaced with more efficient supercritical equipment. As per the CEA’s assessment, of the total installed capacity of 32,830 MW operating for more than 25 years (as of September 2015) in the central and state sectors combined, about 22,170 MW could continue operations for a significant time period. Units in this category have either undergone R&M/LE works or are awaiting the same. A total capacity of 7.7 GW was identified for retirement and replacement with 18.5 GW of supercritical units. Since these projects already have land, and other essential inputs and clearances in place, they are expected to come up a lot faster. Till April 2017, 4.3 GW of capacity has been retired. Meanwhile, of the new units to come up, there are some 13 projects of 6,608 MW in the state sector, which would be replaced with new 660 MW and 800 MW units aggregating 16,580 MW. Also, there are two central sector projects aggregating 1,130 MW that will be replaced with 1,980 MW capacity. Proposals for the new units are at various stages of evaluation.

In line with these initiatives, the country’s biggest power generator, NTPC Limited, has already given in-principle clearance to replace around 11,000 MW of its old and inefficient thermal power plants. Further, to encourage the shutting down of old inefficient plants, the government has  also put in place a policy for the automatic transfer of coal linkages awarded to old and ageing power plants (of over 25 years) to new plants of closest supercritical capacity. 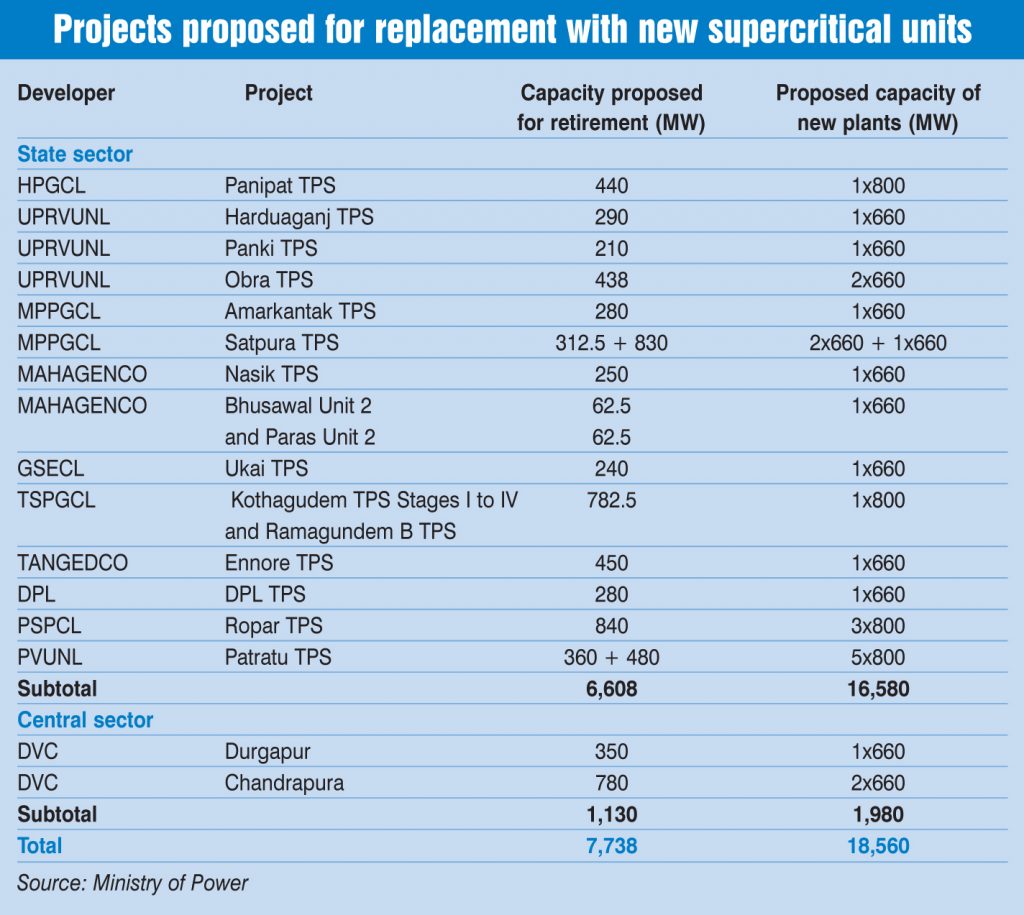 Although R&M is a lucrative option to overcome the current inefficiency in the sector, there are several bottlenecks that need to be addressed. To begin with, the shutdown period for plants must lie in the range of six to eight months. However, usually, such activities take much longer with units taking between 13 and 30 months for the same. Further, technical surprises are inevitable. Another major cause of delay is the carelessness exhibited by contractors who often quit their job midway. Despite the evident hurdles, the R&M space offers immense opportunity for power sector companies to harness the latent potential of their plants in a cost-effective manner.