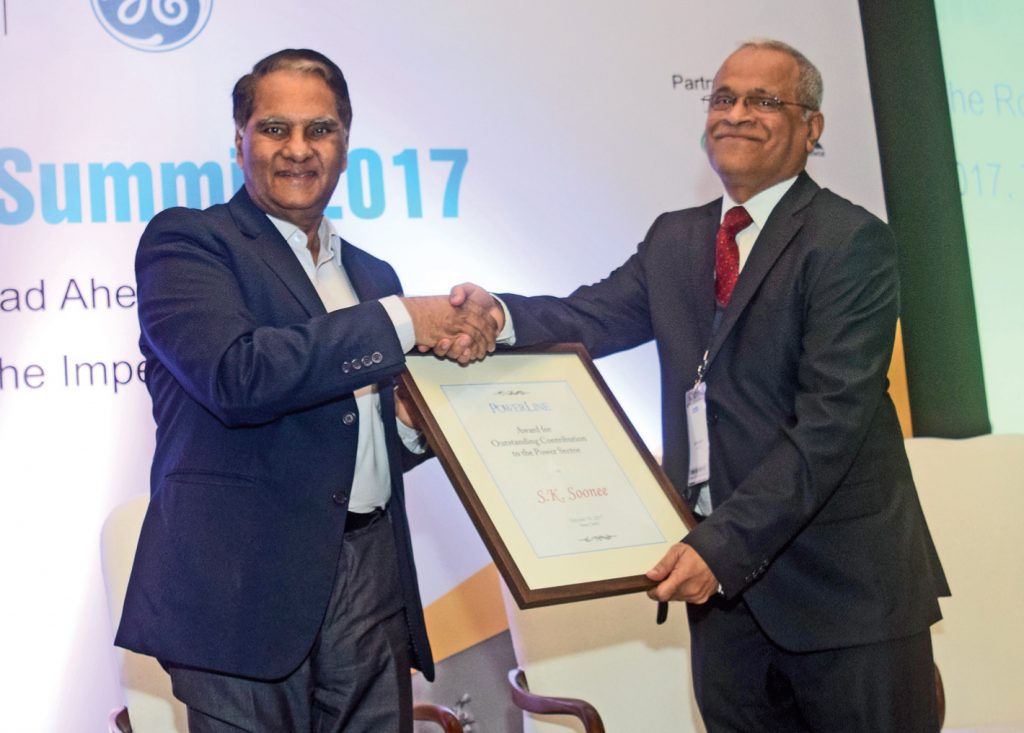 “Power Line does not give these awards easily,” noted Alok Brara, publisher, Power Line, at the award ceremony. “In its history of 20 years, we have given this award only once before, and the recipient was Mr Shahi.” Shahi, indeed, was a worthy recipient. He has had the unique experience of serving as secretary, Ministry of Power, to two successive governments (BJP-led and Congress-led) and is credited for some key policy initiatives and reforms in the sector.

Soonee’s contribution to the sector has been transformational. He is recognised for his work in the area of power systems and market development. “He has contributed to the formulation of  a number of key policies and  regulations. He has even developed institutions.” Moreover, as Brara said: “He is not only willing to teach, but he is also not afraid to learn. For that, we are proud to present him this award.”

Soonee has almost four decades of experience in power system operations. He has been instrumental in achieving the integration of the state grids to form regional grids, which were then integrated to form the national grid and now, the SAARC grid. He specialises in operations, planning, commercial settlement, restoration, and power pooling and governance.

Commending him for his exceptional work and deep knowledge of the sector, Shahi said: “I must congratulate Mr Soonee, and in fact Power Line for recognising him for the outstanding contribution he has made, and continues to make, in a very complicated and complex segment of the power sector.” The Indian power transmission system today is second to none in terms of intellect, construction, design, commissioning and operations, Shahi added.

“Transmission has been one of the most complex areas in the power sector, which only a few people fully understand. This is something that needs to be analysed well and it is one area which will always pose challenges in one way or the other. We have in Mr Soonee someone who is a very knowledgeable expert on various aspects of the transmission system. I would like to congratulate him.”

Soonee has been the recipient of several industry and academic accolades in the past. These include the distinguished alumnus award from IIT Kharagpur, the CIGRE distinguished member award, and IEEE fellow from the Institute of Electrical and Electronics Engineers.

Accepting the award, Soonee said, “Thank you Power Line for the award. I am overwhelmed receiving an award from a towering personality, who has also been a mentor. It is an honour for me.”

“I would like to thank my predecessors and gurus. I would also like to thank my younger colleagues, who have high potential and help us in delivering our work. Thanks to the power sector for giving us the opportunity to serve the country. It gives me tremendous professional satisfaction to implement something pan-India.”

On Power Line’s journey, he commented, “During my college days, I used to always wonder why we cannot have a specialist magazine on power. The first copy of Power Line was a prized possession.”