New wind and solar projects continue to dominate recent global capacity additions. However, when dispatchable power is required, particularly in developing countries, coal remains the fuel of choice for utility-scale plants. Global coal consumption for power generation continues to rise primarily due to the rapid growth of the Indian, African and Asian power markets that value low cost solid fuels.

Every steam plant built today has unique design fuel requirements. For example, economic and policy constraints often dictate the use of difficult to burn indigenous fuels or co-firing with biomass or agro fuels. In addition, in most power markets, fuel flexible yet reliable plants are essential because renewable assets, particularly rapidly fluctuating solar and wind generators can inflate power prices while reducing power grid stability and reliability. Finally, plant owners desire the least expensive fuel available, often sourced globally, to avoid being tethered to a single fuel for the entire lifespan of the plant. Only circulating fluidized bed (CFB) combustion technology caters to all of these often-contradictory design requirements. 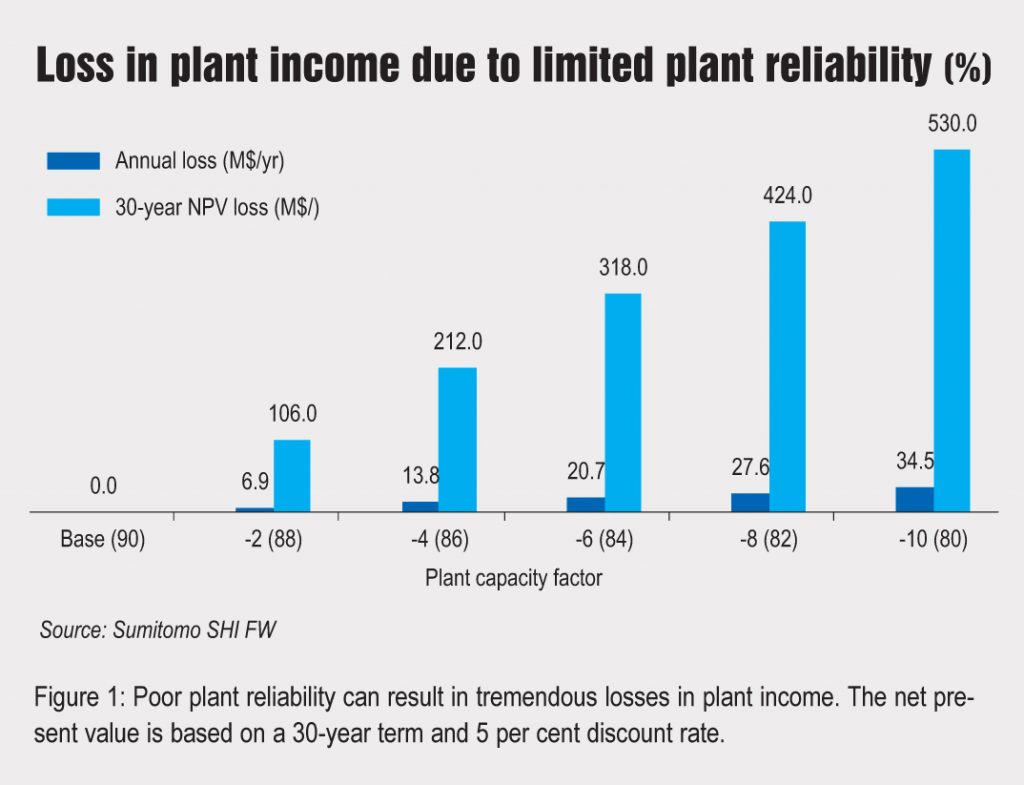 The traditional 6,000 kcal per kg global steam coal market has flourished for the past 50 years but lately it has experienced a rapid transition where price often trumps quality. As coal mines mature, mining operations move to lower quality coal seams. Indonesian coal, for example, dominates the global coal market with about 50 per cent of its exports being high-moisture sub-bituminous coal with gross as received higher heating value (HHV) ranging from 3,900 to 4,200 kcal per kg. Further, the best quality Indonesian coal reserves are expected to produce coal with average HHV not more than 5,200 kcal per kg in the future. The resulting trend is the growing supply of discounted coal, domestic lignites and waste coal that provide a significant economic advantage for fuel-flexible plants capable of burning low-rank and less expensive fuels. The shift towards a more flexible solid fuel market, where buyers and sellers are pleased to trade fuel quality for price, appears to be permanent.

The growing market for low quality solid fuel has dramatically increased the value of fuel flexibility for utility-scale plants and has been the key driver behind the large CFB plants coming online over the past 10 years. CFB plants, unlike pulverized coal (PC) plant designs, give plant owners a choice to stay with premium steam coal or to venture into the broader fuels market and leverage the available price discounts for low-rank coal, even for ultra-supercritical plant designs. 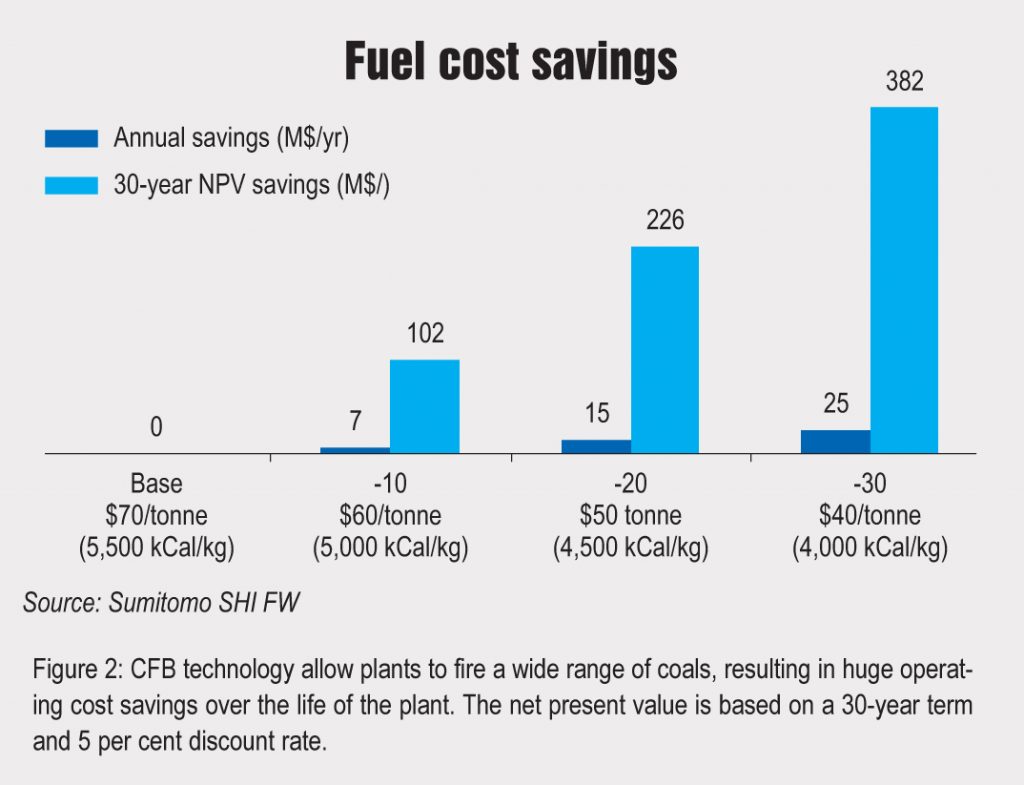 Changes in the global solid fuel market provide a market advantage to the owners of plants that are fuel agnostic. However, fuel flexibility means more than just being able to burn a wide range of coal or even coal and biomass mixes. It also means that plant reliability, maintenance, ease of operation and stack emissions must be largely unaffected over a very wide range of fuel quality including coal and biomass fuel mixes.

PC boilers have trouble burning low quality fuels due to their narrow fuel range that typically demands 5,500 kcal per kg (23 MJ per kg) HHV or higher energy content, fuel moisture below 30-35 per cent and volatility above 20 per cent. However, this is not the case with CFB technology. Modern CFBs technology can efficiently burn both low-rank coal and high energy fuels like petcokes and anthracites with heating values ranging from 1,500 to 8,500 kcal per kg (4-35 MJ per kg), fuel ash and moisture levels as high as 60 per cent and volatility down to 5 per cent.

Unlike conventional PC boilers that rely on an open flame, the circulating solids of a CFB are used to achieve high combustion and heat transfer efficiency. Fuel circulates until completely burned. The ash in the fuel does not melt or soften due to the CFB’s low combustion temperatures, which allows the CFB to avoid fouling and corrosion problems encountered in conventional boilers.

From an environmental aspect, the low temperature CFB combustion process minimises NOx formation and allows limestone to be fed directly into the furnace to capture SOx. In most cases, selective catalytic reduction (SCR) and flue gas desulphurization (FGD) systems are not needed for NOx and SOx control, dramatically reducing the plant’s first cost, annual operations and maintenance (O&M) cost, and water consumption.

For a PC boiler to control fouling, slagging and corrosion when burning low rank coal, such as high sodium lignite, the furnace cross section and height must increase considerably, as much as 45 per cent in height and 60 per cent in footprint. Further, unlike PC, CFB does not need soot blowers to control the build-up of deposits and slag in the furnace since the circulating solids keep the furnace walls, panels and steam coils clean, allowing for the most efficient heat transfer possible.

Finally, unlike PC boilers, the fuel does not have to be finely ground, dried or dispersed into the furnace by burners, thus avoiding the cost and maintenance of fuel dryers, mills, coal pipes and burners. For the CFB, the fuel is coarsely ground and dropped into fuel chutes using gravity to get the fuel into the boiler. 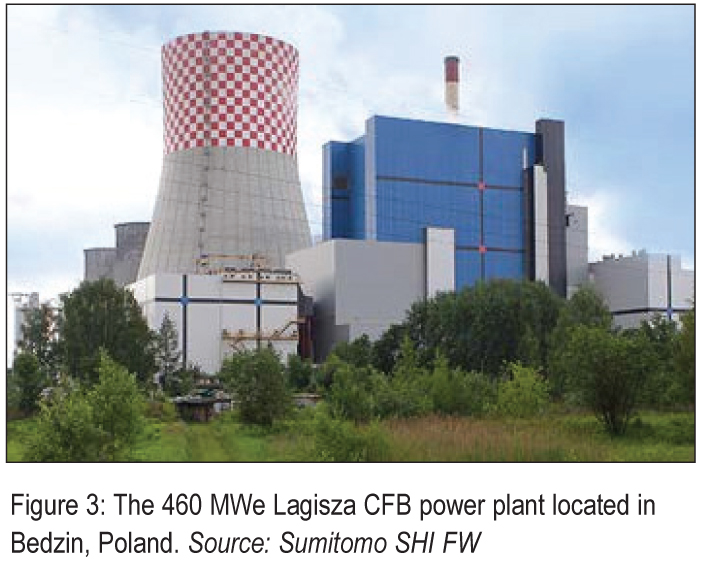 It is a well-known industry fact that steam generator outages are the single largest contributor to reduced plant availability, which therefore determines the project’s financial success (Figure 1).

For example, consider a 600 MWe supercritical coal plant that burns $50 per tonne (4,500 kcal per kg) Indonesian coal and sells power at $100 per MWh at a base 90 per cent capacity factor. A loss of four percentage points in the annual capacity factor will reduce the plant’s bottom line economics by $13.8 million every year or $212 million (NPV) over its 30-year operational life. In addition, CFB demonstrates up to average 5.5 percentage point superiority in plant availability factor over 15 years.

The cost of fuel is the largest item of the operating cost of any power plant. The magnitude of the fuel cost savings can be demonstrated by using the same supercritical plant example above firing $70 per tonne (5,500 kcal per kg) coal as a base (Figure 2). Reducing the cost of fuel by $10 per tonne will add $7 million to the plant’s bottom line every year and $102 million over 30 years. 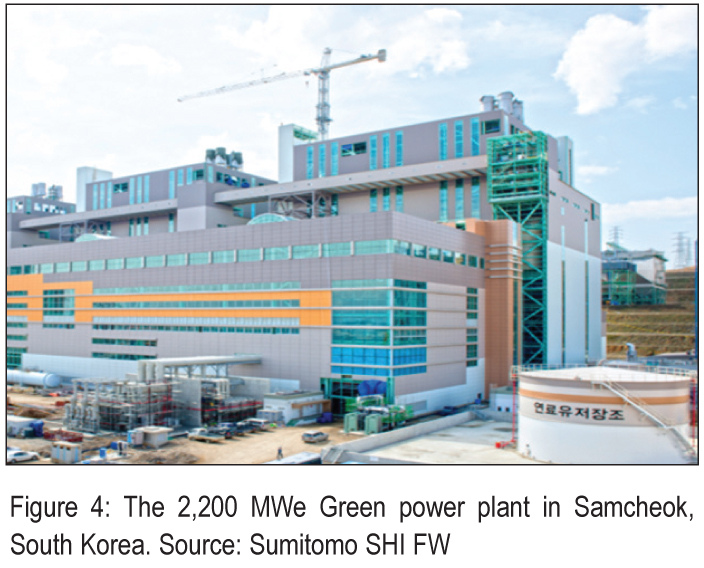 The Lagisza CFB power plant is the world’s longest operating supercritical CFB power plant (Figure 3). Tauron’s Lagisza power plant in Poland has been operational since 2009. At the heart of the plant is a 460 MWe supercritical CFB with an impressive net plant efficiency of 43.3 per cent  using bituminous coal. Most importantly, the plant meets its permitted stack emissions without SCR or FGD equipment, thereby saving Tauron over $100 million in its construction cost and millions each year in terms of O&M costs.

Another example of a utility-scale CFB plant is the 2,200 MWe Samcheok Green power plant in Samcheok, South Korea (Figure 4). The Samcheok plant has four 550 MWe CFBs utilising ultra-supercritical steam conditions. The plant is capable of meeting tighter stack emissions norms without using FGD equipment, saving Korea’s Southern Power Company over $250 million in construction cost. The plant is designed to burn a wide range of imported coal. The CFB technology is also capable of co-firing indigenous bituminous coal and up to 5 per cent biomass. The plant is designed to operate with a 42.4 per cent net efficiency and became commercially operational in December 2016,  making it the most advanced CFB plant in the world.