From facing a severe power crisis to achieving 24×7 power supply, Telangana’s power sector has come a long way. This can be attributed to the state’s power utilities that have performed efficiently to achieve the turnaround. Northern Power Distribution Company of Telangana Limited (TSNPDCL) plays a crucial role in the state’s power sector, catering to a consumer base of about 5.3 million as of April 2017. A. Gopal Rao, chairman and managing director, TSNPDCL, says, “Power cuts in Telangana are now a thing of the forgotten past. The people today enjoy 24-hour power supply like never before.”

Headquartered in Warangal, TSNPDCL (formerly Northern Power Distribution Company of Andhra Pradesh Limited) has continuously improved its performance since its formation in May 2014 after the enactment of the Andhra Pradesh Reorganisation Act, 2014, which led to the bifurcation of the state into Telangana and Andhra Pradesh. As per the annual rating released by the Ministry of Power (MoP), the discom’s performance rating improved to B+ in 2015-16. Further, it secured an A grade with a score of 72 in April 2017 for good performance under the Ujwal Discom Assurance Yojana (UDAY), becoming the eighth discom to achieve this.

Currently, nine hours of free power is being provided to agricultural consumers with plans to extend the supply to 24 hours. “Like no other state in India, the farmers of Telangana would enjoy 24 hours of free uninterrupted power supply from May 2018 onwards, as per the announcement made by the chief minister. The cost of infrastructure expansion for the same is estimated at Rs 1.2 billion,” says Rao. During 2016-17, a total of 42,713 agricultural services were released and in 2017-18 (April and May), 3,976 services were released.

TSNPDCL is undertaking distribution system strengthening and expansion works under various schemes of the central government such as the Deendayal Upadhyaya Gram Jyoti Yojana (DDUGJY) and Integrated Power Development Scheme (IPDS), as well as the state government. The MoP has sanctioned projects worth Rs 1.21 billion for rural areas in five circles of TSNPDCL under the DDUGJY. The works covered include rural household electrification at an estimated cost of Rs 657.5 million; system strengthening works at Rs 510.5 million; Sansad Adarsh Gram Yojana (Rs 32.8 million); and metering at an estimated cost of Rs 6.2 million.

TSNPDCL is also implementing the IPDS in 33 towns across five circles at an estimated cost of Rs 2 billion. The scope of work under the scheme includes the erection of 17 new 33/11 kV substations; capacity augmentation of 27 power transformers and 1,262 distribution transformers; and laying of 62.8 km of 33 kV lines and 620 km of 11 kV lines.

In addition, the discom is implementing a distribution network renovation drive, which includes rectification work in 2,419 villages under Phase I at a cost of Rs 2.04 billion. As a part of this programme, 13,487 bent and damaged intermediate poles, 2,227 damaged stays, 6,683 defective insulators and 363 km of damaged conductors have been replaced so far. In addition, rectification of 4,999 loose spans, 2,056 distribution transformer (DTR) earthing and 279 AB switches has been carried out. The DTR plinth has been raised in 230 locations, and 641 low level road crossings have also been rectified.

Besides, TSNPDCL is executing high voltage distribution system (HVDS) works, under which it is converting agricultural services from the low voltage distribution system to HVDS. For the current financial year, conversion of 29,742 agricultural services has been targeted at an estimated cost of Rs 1.5 billion. Of these, conversion of 1,241 services was achieved during April 2017.

The utility has also planned a 382 km 33 kV interlinking line programme at a cost of Rs 121.1 million. In addition, it converted 33 service agricultural connections from one-phase distribution transformers to three-phase ones in April 2017. The utility has further planned to convert 2,384 service connections during 2017-18. 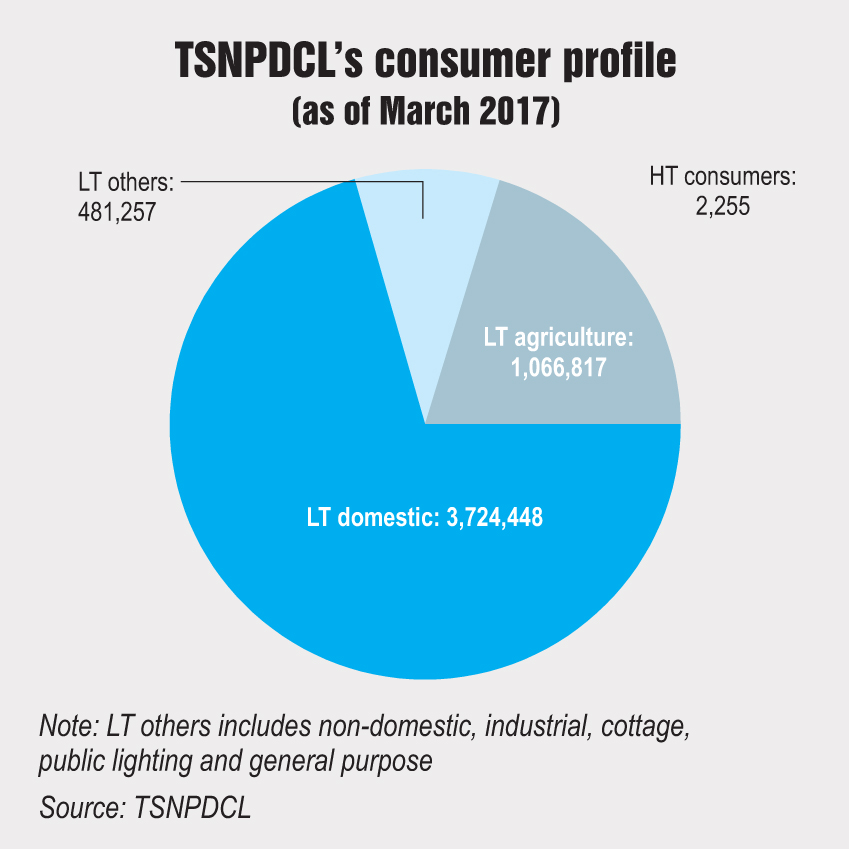 In order to improve its energy efficiency, TSNPDCL has distributed 169,000 bulbs in 10 nagarpalikas and an additional 18,650 bulbs are proposed to be installed at 33/11 kV substations, where yard lighting is poor. The utility has also released 27 services connections for lift irrigation and work is in progress for 17 services.

In the IT sphere, the TSNPDCL app was introduced to encourage consumers to report electrical exigencies such as fallen poles, conductor snap and electrical shocks. Swiping machines have been introduced at electricity revenue office counters for the payment of bills through cards. The utility also carries out regular discussions with consumers regarding the power supply condition and targets to release all domestic applications on priority and within the service-level agreement period.

One of the key concerns facing the discom is the high power purchase cost due to a sharp fall in the energy despatched from cheaper hydel sources. It has been observed over the past few years that the actual availability at hydel stations has been consistently lower than that approved by the state regulator. This can be attributed to the multi-purpose usage of hydro projects, wherein irrigation takes preference over power generation. Another key challenge for the discom is lower power procurement through long-term agreements.

In addition, with the increasing share of solar in the state, the discom needs to gear up for increased procurement of solar power in the coming months. By October 2017, the solar power capacity is expected to more than double to 984 MW in TSNPDCL’s area of jurisdiction. Besides, the timely availability of subsidy from the state government for the free power supplied to the agricultural segment and regular tariff increase are crucial for maintaining fiscal discipline especially post the implementation of UDAY. However, given the state government’s resolve to turn around the state’s power sector and TSNPDCL’s ongoing initiatives, these challenges will be surmounted. Going forward, the utility is expected to focus on the continuous reduction of AT&C losses and improvement in collection efficiency.