One of India’s most lauded and unique ultra high voltage direct current (UHVDC) projects is the North-East Agra transmission superhighway. Set up by the central transmission utility Power Grid Corporation of India Limited (Powergrid), this is the country’s first 800 kV HVDC link. It has the distinction of being the world’s first and longest 800 kV multi-terminal HVDC transmission project as well as the first to have 12-pulse converter terminals. The project also houses the world’s largest capacity-rated converter transformer.

Further, the project is extremely crucial from an energy security standpoint. With a length of 1,775 km and a power transfer capacity of 6,000 MW, it is helping deliver clean hydroelectric power from the hydro-rich north-eastern region to load centres in western India. It traverses difficult terrain in three regions across four states, extending from Biswanath Chariali in Assam to Agra in Uttar Pradesh via Alipurduar in West Bengal. The first pole was commissioned in November 2015, enabling bidirectional flow of up to 1,500 MW of power. The second 1500 MW pole was commissioned in 2016. Works on the Alipurduar terminal have also been completed and it is currently under testing.

The Biswanath Chariali-Agra transmission line is part of the Northeast-North/ West interconnector project. The line has a capacity of 6,000 MW.

The project was conceived in the backdrop of the 50,000 MW Hydroelectric Initiative, launched in 2003 for fostering the development of the 65,000 MW hydro potential of the Northeast. In order to harness this potential, robust transmission infrastructure was required to connect the north-eastern region with the northern and western regions. Thus, 12-15 high capacity transmission corridors of 5,000-6,000 MW each were envisaged by Powergrid while keeping in mind right-of-way constraints in the “chicken neck” area (a narrow 22×18 km stretch of land in Siliguri district of West Bengal, bordering Bangladesh and Nepal). After carrying out surveys through satellite imaging and GIS, it was decided to implement this line.

The North-East Agra project has four terminals located at three converter stations. The converter stations are located at Biswanath Chariali (Assam), Alipurduar (West Bengal) and Agra. The stations at Biswanath Chariali and Alipurduar, which have one rectifier terminal each, can handle a total of 6,000 MW of power (3,000 MW each), while the one at Agra with two terminals in parallel configuration can handle 6,000 MW. The project has been designed with a continuous 33 per cent overload feature, the first of its kind in the world. The earth electrode has been designed for 5,000 amperes direct current continuous current.

The converter stations at Biswanath Chariali and Alipurduar convert alternating current (AC) to DC for transmission over a single power line and deliver electricity to the station in Agra. At Agra, there is reconversion to AC for distribution to end users. Bharat Heavy Electricals Limited and ABB were given the turnkey responsibility for project execution, including system engineering, design, supply and installation of three HVDC converter stations. 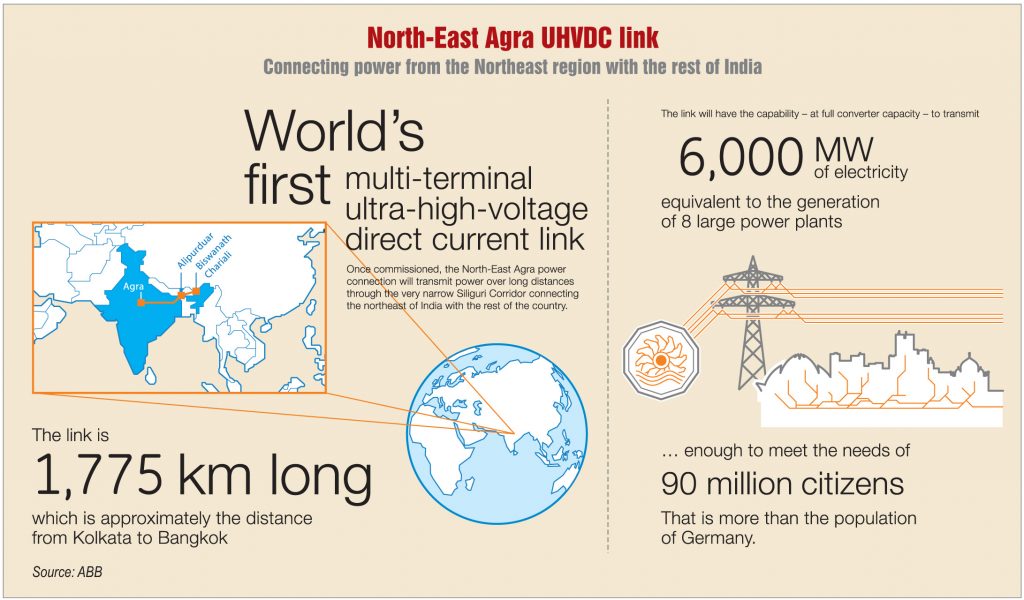 The 800 kV converters used in the project have each been configured as 12-pulse converters. Overall, there are 60 single-phase, two-winding, oil-immersed transformers deployed in the project. This is also the first time in the world that an 800 kV project has an indoor DC hall (75x75x 35 metres) for DC yard equipment, that is, smoothing reactors, DC filters, DC disconnectors, etc., at its Agra terminal. Provision has also been made at both rectifier terminals to install an additional bipole of 3,000 MW, which is to be operated as parallel converters to the present set-up. This has been done keeping in mind the future generation possibilities in the north-eastern region.

The transmission system is designed to operate in the bipolar, monopolar (ground return/metallic return) and hybrid modes of operation, thereby providing wide flexibility in the case of outages in different HVDC line sections and/or different converters. There is also a master control facility to control and coordinate power flow. If one converter trips during operation, the other pole will automatically compensate for the power lost. 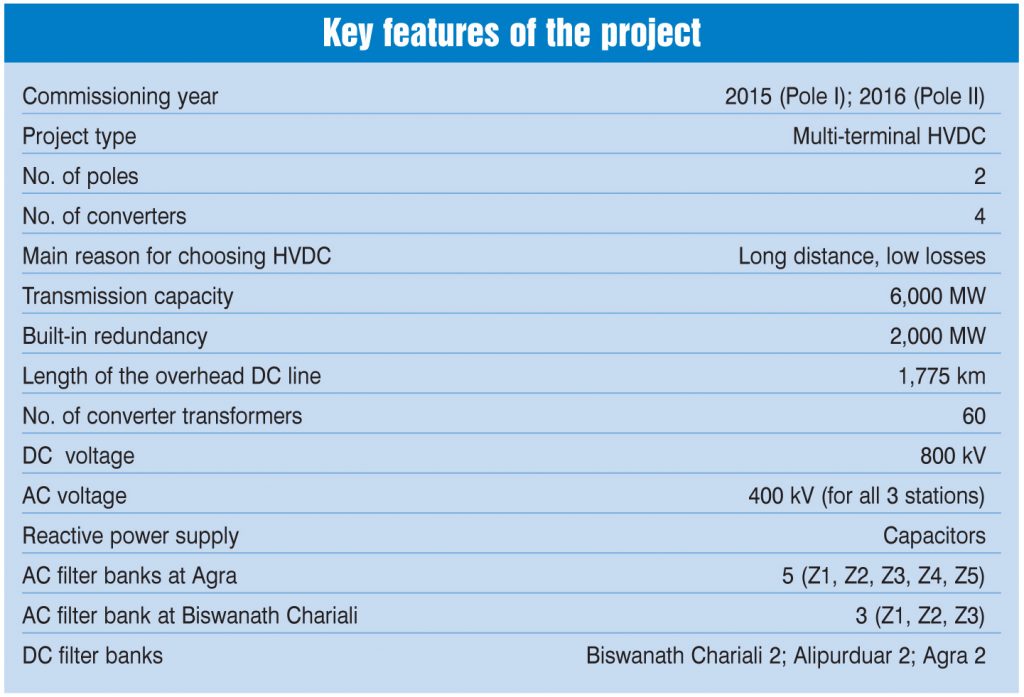 At full capacity, the North-East Agra UHVDC link will be able to supply enough electricity to serve 90 million people, based on the average national consumption. The deployment of HVDC technology will also help minimise the losses associated with bulk power transmission over long distances. In addition, the deployment of multi-terminal solutions will considerably reduce costs as compared to the alternative of operating separate links to Agra from multiple hydro plants. Overall, the line is expected to contribute towards maintaining a stable national grid.