India has a vast mineral potential with mining leases granted for long durations of 20 to 30 years. Approximately 87 minerals – four fuel related, 10 metallic, 47 non-metallic, three atomic and 23 minor – are being produced in the country, and the contribution of the mining sector to the country’s GDP is nearly 1.2 per cent.

A rise in infrastructure development, the manufacturing sector and automotive production are driving growth in the metals and mining sector in the country. The government has allowed 100 per cent foreign direct investment in the mining sector and exploration of metal and non-metal ores under the automatic route, which will propel growth in the sector, aided further by the power and cement industries. Demand for iron and steel is set to increase, given the strong growth expectations of the residential and commercial building industry.

In addition, the country holds a fair advantage in the cost of production and conversion costs in steel and alumina production. India is the third largest steel producer, with a production of 97.38 million tonnes (mt) of crude steel in financial year 2017 and the largest producer of sheet mica in the world, and has the seventh largest bauxite reserves at around 2,908.85 mt in financial year 2017.

As per a McKinsey Global Institute report, the development of the mining sector in India is important if the country wishes to achieve 7 per cent plus GDP growth in the future. The report states that the sector can contribute $47 billion to India’s GDP by 2025. Given the size and importance of India’s metals and minerals industry, and being one of the highest-energy-consuming and carbon dioxide-emitting industries, there is vast scope for setting up combined heat and power (CHP) plants (if both power and steam are required for process operations) and waste heat recovery (WHR) plants (if only power is required). Since this sector’s operations mostly do not require steam, the latter has more potential. For example, iron and steel industry statistics show that the consumption of electricity in blast furnaces, sinter plants and coke oven batteries are 39 per cent, 12.5 per cent and 11.9 per cent respectively of the total electricity consumption. During their process, these three units generate a lot of heat, which was conventionally wasted. Now, technology has been developed to generate power from this waste heat.

Direct-reduced iron (DRI), also called sponge iron, is produced from the direct reduction of iron ore (in the form of lumps, pellets or fines) to iron by a reducing gas or elementary carbon produced from natural gas or coal. By recovering the waste heat, a 100 tpd DRI kiln can generate 1.6 MW of usable power, that is, 11 MUs per year. The savings are Rs 22 million per year (grid power costs Rs 2.50 per kWh). All the waste gases from the sponge iron plant can be used to produce steam, which drives a turbine to generate power. Other waste like coal fines and char can generate an additional 1.5 MW of power in a fluidised bed combustion (FBC) boiler, which can save another Rs 20 million-Rs 21 million per year. Thus, the cost of power can be as low as Re 0.80 per unit. 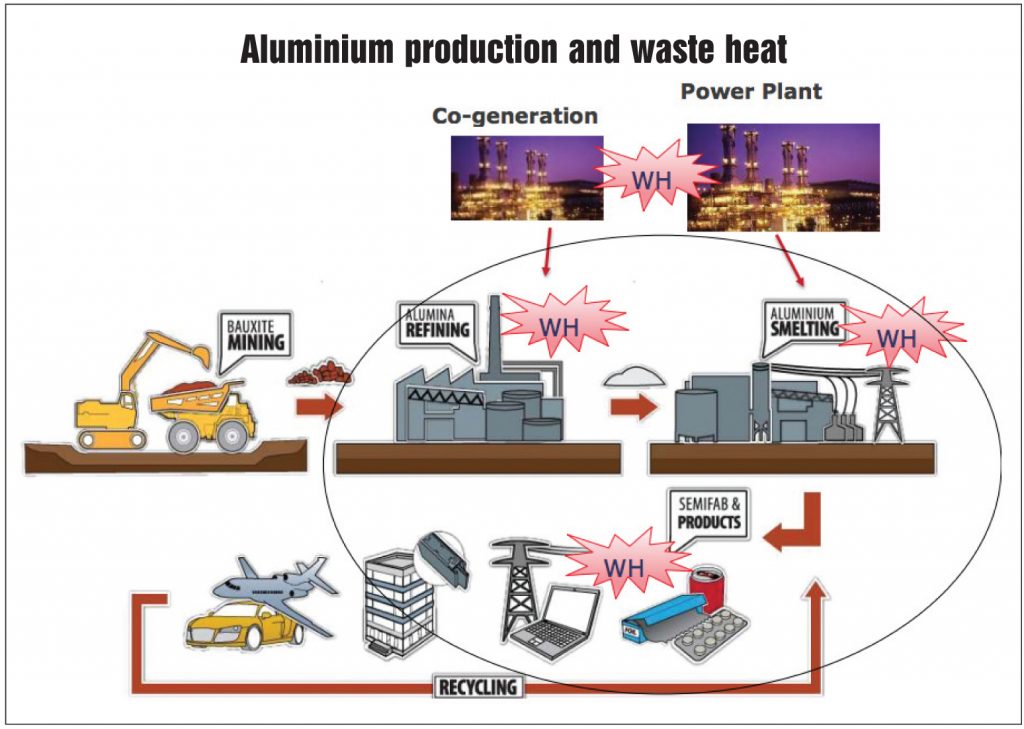 These are the basic reasons for recovering waste heat:

The Ministry of New and Renewable Energy (MNRE) has offered several financial and fiscal incentives for biomass-based cogeneration projects in the form of central financial assistance, concessional import duty, excise duty, tax holiday for 10 years, bank loans of up to Rs 150 million for biomass-based power generators as part of priority sector lending, etc. The benefit of concessional customs duty and excise duty exemption is available on the equipment required for the initial setting up of biomass projects based on certification by the ministry. In addition, the state electricity regulatory commissions have determined preferential tariffs and renewable purchase standards, while the Indian Renewable Energy Development Agency provides loans for setting up biomass power and bagasse cogeneration projects.

Due to the above incentives, CHP is well established in the sugar and distillery sector, but has huge potential still in other sectors, including metals and minerals. For example, industries in this sector could set up a CHP plant using local renewable (agri-waste) fuels, but this is not as cost-effective as applying WHR technologies. Due to this and other drawbacks such as slow approval of projects, the achievement of non-bagasse-based biomass cogeneration (off-grid/captive) stands at only around 660 MWeq as of September 30, 2017, as per the MNRE.

Given the current and expected growth in the metals and minerals sector, CHP/WHR has huge potential to deliver energy savings and reduce costs. Other benefits include additional heat and energy production that can be exported/used by local communities, high overall efficiency (80 per cent or more at the point of use), and additional guarantee of continuity in energy supplies for the operator and consumer. The extent of the potential, though, is strongly dependent on a range of assumptions such as favourable policy measures and the availability of financing. Technology too has a key role to play in the sector’s future competitiveness. 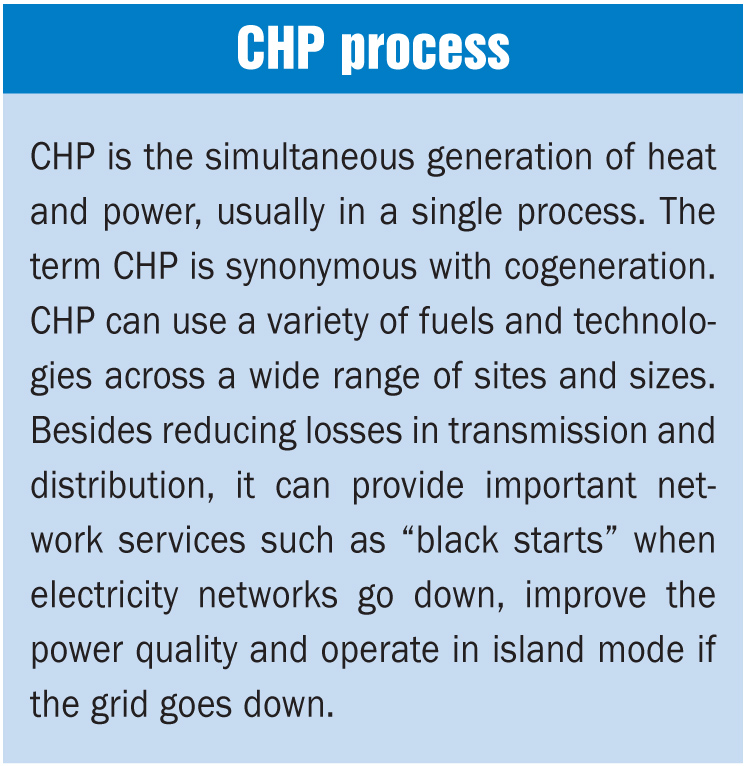 As per S.C. Natu, member secretary, Cogeneration Association of India, “CHP in the metals and minerals industries mainly relates to WHR and coal-based captive power plants, where steam and power are generated from coal or waste heat and used entirely for power generation, as there are little or no process steam requirements in this sector. The potential for such power projects, particularly in the small and medium sectors, is quite substantial. However, it remains untapped, mainly due to lack of knowledge and experience about the benefits of CHP/WHR applications, non-availability of demo projects for their scale and type of industry, lack of access to financing and incentives, and inadequate in-house capacity for designing, developing, implementing, operating and maintaining these projects. Specific supportive financing schemes from the concerned ministries and financial institutions, as well as skill upgradation and information dissemination efforts will go a long way in harnessing this potential.” 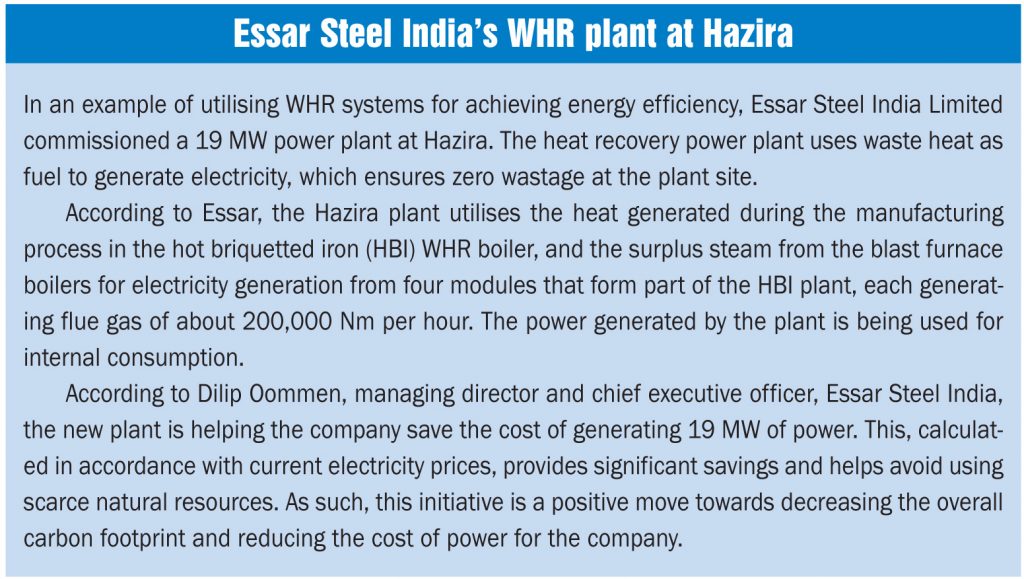