Karnataka Power Transmission Company Limited (KPTCL), the sole transmission company in Karnataka, is one of the largest transcos in the country. It is also among the few transcos to have consistently undertaken activities to modernise and upgrade its network. It has ensured that its network not only has high system availability but also meets the state’s energy requirements reliably.

The transco has been a front runner in automating its entire power network with a state-of-the-art supervisory control and data acquisition (SCADA) system. In fact, the  system will be upgraded by next year with real-time operational tools. In addition, KPTCL has deployed a first-of-its-kind VSAT (very small aperture terminal) communication network, which helps the utility monitor, control and deliver electricity. Further, it plans to set up a renewable energy management centre (REMC) to ensure efficient integration of renewable energy capacity in the state.

KPTCL  was  formed  by  carving  out  the  transmission  and  distribution  functions  of  the erstwhile  Karnataka  Electricity  Board.  However,  in  the  second  round  of  unbundling,  in  2002,  KPTCL  retained  the transmission and bulk supply functions while the distribution function was handed over to five newly formed distribution companies. Subsequently, as  per  the  provisions  of the  Electricity  Act,  2003,  KPTCL  was  divested  of  its  bulk-supply  business  with  effect  from  June  9,  2005.

KPTCL is now responsible for  transmitting  power in the state, as well as construction and maintenance of stations and lines of 66 kV and above. It also serves as the state load despatch centre in Karnataka.

KPTCL has established a satellite communication network under which VSATs have been provided at all substations from the 33 kV to the 400 kV levels, and at all generating stations. The VSAT network provides voice communication and SCADA connectivity. It has an uptime of 99.6 per cent and has grown from 22 VSATs in 1996 to 1,400 VSATs at present.

Further, the transco has a SCADA system which provides real-time visibility on key parameters across 1,400 locations in the state. These parameters include load, current and voltage of all lines and transformers ranging from the 11 kV to the 400 kV level. KPTCL’s SCADA system architecture includes 13 control centres – one main control centre, one backup centre and 11 area load despatch centres. It is powered by 72 servers and 210 operator workstations. By December 2018, KPTCL is planning to upgrade its SCADA and energy management systems with the latest technology and real-time operational tools.

In addition, KPTCL is implementing an optical fibre communication network on its entire 220 kV and 400 kV system to cover all major generating stations. This network will provide real-time data and will be used for ensuring grid security. The project, spanning 6,000 km of fibre, will connect 160 locations. It entails an estimated cost of Rs 2.92 billion and is scheduled for completion by March 2019. 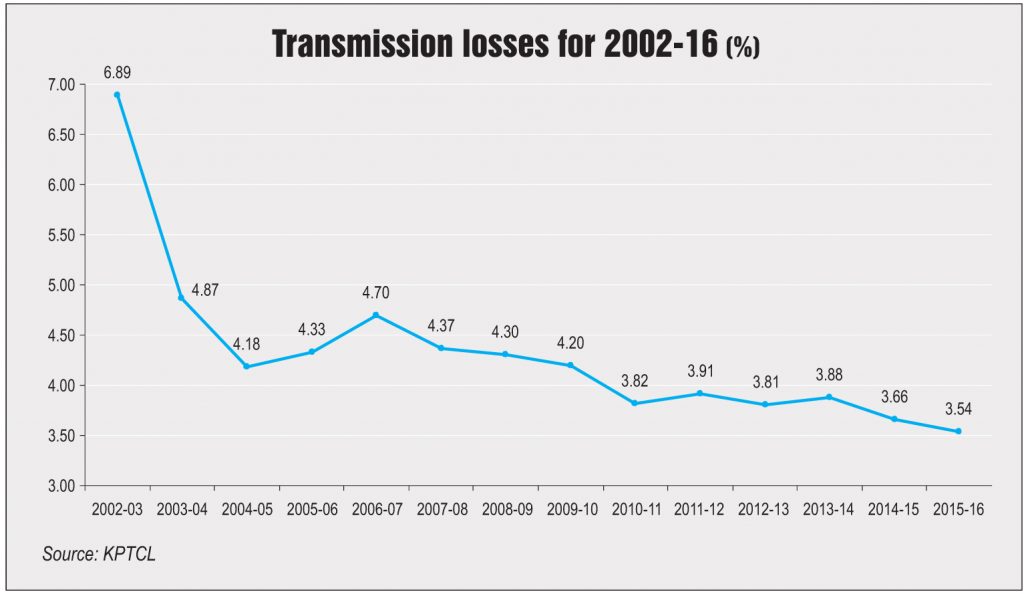 KPTCL, along with the unbundled discoms, has undertaken a joint initiative to replace all 11 kV feeder meters and interface point meters across the state with standardised DLMS meters with a remote downloading facility. Through this project, the utility aims to replace around 17,000 meters by August 2018.

In addition, KPTCL is taking measures to ensure efficient integration of the existing and upcoming renewable energy capacity in the state. It will be among the first few transcos to have an REMC, which is currently being implemented by the Ministry of Power and the Ministry of New and Renewable Energy. The REMC will facilitate wind and solar generation forecasting and ensure near 100 per cent visibility of renewable generation on a real-time basis. This monitoring through SCADA will allow for proper day-ahead scheduling of renewable energy generation and ensure smart despatching of power supply. The REMC is expected to be implemented by August 2018.

KPTCL has several network expansion projects and capacity upgradation plans on the anvil. However, some of the key challenges facing the timely execution of these projects are the significant cost of land, right-of-way issues, etc. To this end, the utility has deployed new transmission technologies, which require less space and enhance the transmission capacity of the corridor. These include the use of 400 kV multi-circuit monopole transmission lines, 400 kV quad moose DC lines, deployment of GIS substations at several locations as well as hybrid switchgear in its network.

The utility is also expanding its human resource base and investing in cross-functional training to ensure smooth functioning of the system and better management of the growing network. Net, net, KPTCL’s efforts to overcome the transmission bottlenecks in the state are a step in the right direction. Moreover, with the increased focus on renewable energy integration with the grid, the transco is geared up to face the challenges ahead. n

Based on a presentation by Thyagaraj Ramachandran, Executive Engineer, KPTCL, at a recent Power Line conference