Lowering its fuel cost burden has been one of the key focus areas of Indian Railways. In view of the huge cost savings possible from transitioning to electric traction, Indian Railways has intensified its focus on rail electrification. It plans to undertake 100 per cent electrification of its broad gauge network by 2021-22, as against 50 per cent of the broad gauge network electrified as of March 31, 2017.

In order to achieve this objective, the ministry has taken a number of initiatives. These include adopting the engineering, procurement and construction (EPC) mode for awarding electrification works, increasing the number of executing agencies and focusing on improved contract management.  Besides this, in order to meet the electrification needs of the railways, the Ministry of Railways is setting up dedicated transmission lines to ensure power supply at reasonable costs and improve the reliability of power supply.

The ministry’s electrification plans are expected to create huge opportunities for equipment manufacturers in the country. It will generate additional demand for cables, conductors, switchgear, insulators, etc. 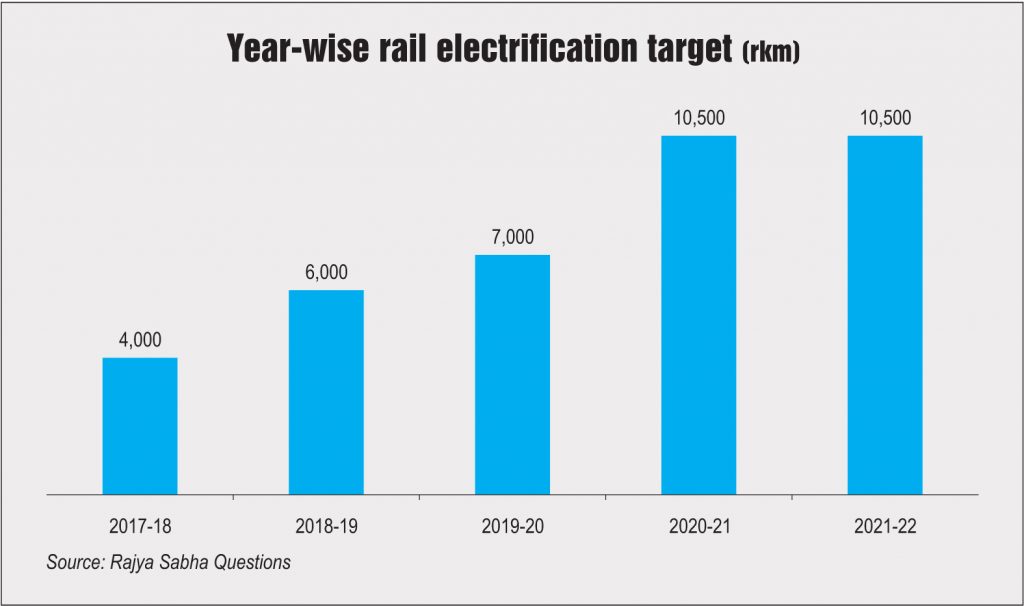 Towards 100 per cent electric traction

The year 2017 recorded an all-time high level of electric traction commissioning of 2,367 rkm. Meanwhile, a target of 4,000 rkm of electrification has been set for financial year 2017-18. Besides, the ministry plans to increase the pace of electrification to 6,000 rkm per annum in 2018-19.

One of the key initiatives taken by Indian Railways to achieve the target of 100 per cent electrification is a change in the mode of awarding project work. First, the railways has adopted the EPC mode for electrification awarding. Second, it plans to award individual tenders as large as 1,500 km. This would not only lower electrification costs due to better economies of scale but also make the tenders more appealing to large companies. Hitherto, Indian Railways has been awarding tenders for smaller lengths of 30-40 km. This move will bring down electrification costs substantially, from Rs 10 million-Rs 20 million per km at present. In August 2017, the Ministry of Railways had awarded its first-ever EPC contract to Larsen & Toubro Limited. The Rs 10.5 billion contract entailed the electrification of 781 km of rail tracks.

To conclude, rail electrification will go a long way in improving the overall cost economics of Indian Railways. Besides, it will open up a huge market for transmission and distribution equipment providers.