The renovation and modernisation (R&M) of coal-based thermal power plants (TPPs) is crucial, both from an environmental and an economic perspective. As of February 2018, there are a total of 622 coal-based power plant units in the country, of which 197 have been operating for more than 25 years. Given that a large number of generating units are old and have outlived their designed life, R&M has been recognised as a cost-effective option to restore the rated capacities of these plants. It helps improve generation, minimise inefficiencies and extend the life of the plants. Moreover, R&M is required for minimising emissions from the existing fleet of old TPPs, thus ensuring compliance with environmental norms.

The government initiated the R&M programme for thermal power units in 1984 in order to improve their performance. During 2012-17, the Central Electricity Authority (CEA) identified a total of 135 thermal power units with an aggregate capacity of 29,367 MW for R&M and life extension (LE). However, of these, works for only 37 units totalling 7,202.26 MW were completed during this period. Going forward, R&M and life extension (LE) works for 64 units aggregating 14,705 MW are being considered for the 2017-22 period.

Another key initiative taken by the government has been the replacement of power plants older than 25 years with new supercritical units. According to the CEA’s data, around 32,830 MW of capacity had been operating for more than 25 years, as of March 31, 2015. Of this, around 5,860 MW was considered for retirement in a phased manner while 4,800 MW was taken up for R&M. In addition, around 10,180 MW of old units were identified for replacement with supercritical units. Of this, an aggregate capacity of 6,542 MW has already been retired between September 2015 and November 2017. 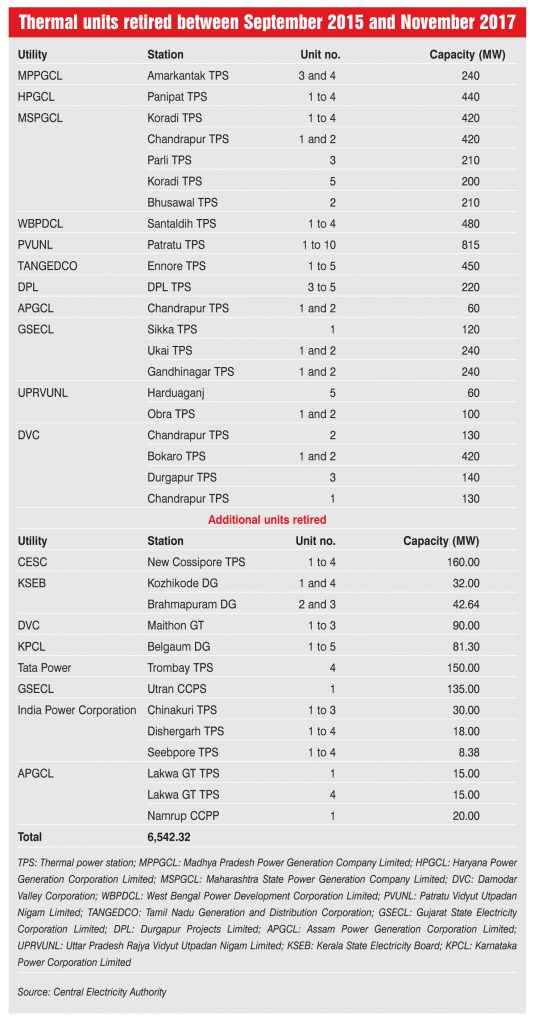 The CEA has also implemented a year-wise flue gas desulphurisation (FGD) phasing and electrostatic precipitator (ESP) upgradation plan, in view of the environmental norms notified for thermal power stations. As per the plan, a total of 415 and 231 units will be taken up for FGD phasing and ESP upgradation, respectively, during 2018-22.

In addition to the CEA’s initiatives, a few pilot R&M projects in India have been financed by some external funding agencies such as KfW Development Bank, the World Bank and the European Union. KfW and the World Bank have provided grant for technical assistance in R&M-related studies and the preparation of feasibility reports/detailed project reports (DPRs) at selected TPPs. In addition, the Ministry of Economy, Trade and Industry (Japan) has agreed to share its technical expertise and support the actual implementation of mutually agreed techno-economic R&M solutions in India.

The pace of R&M works at coal-based plants has been rather slow. As per a study conducted by the CEA, the actual plant shutdown period for R&M works varies from 13 to 30 months, instead of the scheduled six to eight months. In order to minimise the shutdown period and avoid time and cost overruns, the necessary preparations for material/ equipment procurement need to be made in advance. Further, in order to prevent technical faults during R&M, DPRs should be prepared by consultants on the basis of residual life assessment studies. Moreover, project management guidelines for R&M works should be identified, defined and standardised.

Often, contractors/subcontractors leave their work midway. To address this problem, utilities have made provisions for liquidated damages for delays in the completion of work at the chargeable rate of 0.25 per cent per week of the contract value. The decision to undertake R&M or replacement would depend on techno-economic aspects and may be considered on a case-to-case basis by the concerned power utilities. Despite various roadblocks, R&M and LE offer potential solutions for improving power plant performance in a cost-effective manner. Going forward, clear timelines, adequate financial support and comprehensive analyses can change the way R&M works have been executed so far.