The chemicals industry in India is an important contributor to the economy, sustaining a variety of downstream industries such as textiles and pharmaceuticals. With a market size of $145 billion, India is the seventh largest producer of chemicals worldwide and the third largest producer in Asia, after China and Japan.

Based on estimates available for 2011-12, the gross primary energy consumption of the petrochemicals sector was  120 million GJ or 2.85 million tonnes of oil equivalent (mtoe). Production of propylene and ethylene consumed the maximum energy with almost 63 per cent of the cumulative energy consumption for the entire sector. Says Vivek Taneja, business head at Thermax, “The petrochemicals industry is amongst the most energy and carbon-intensive industries in India. Given the national commitments made at COP21 in Paris, such carbon-intensive industries have a moral responsibility to reduce their energy and carbon intensity. A carrot-and-stick approach under the Perform, Achieve and Trade (PAT) scheme is already in place for achieving this.” 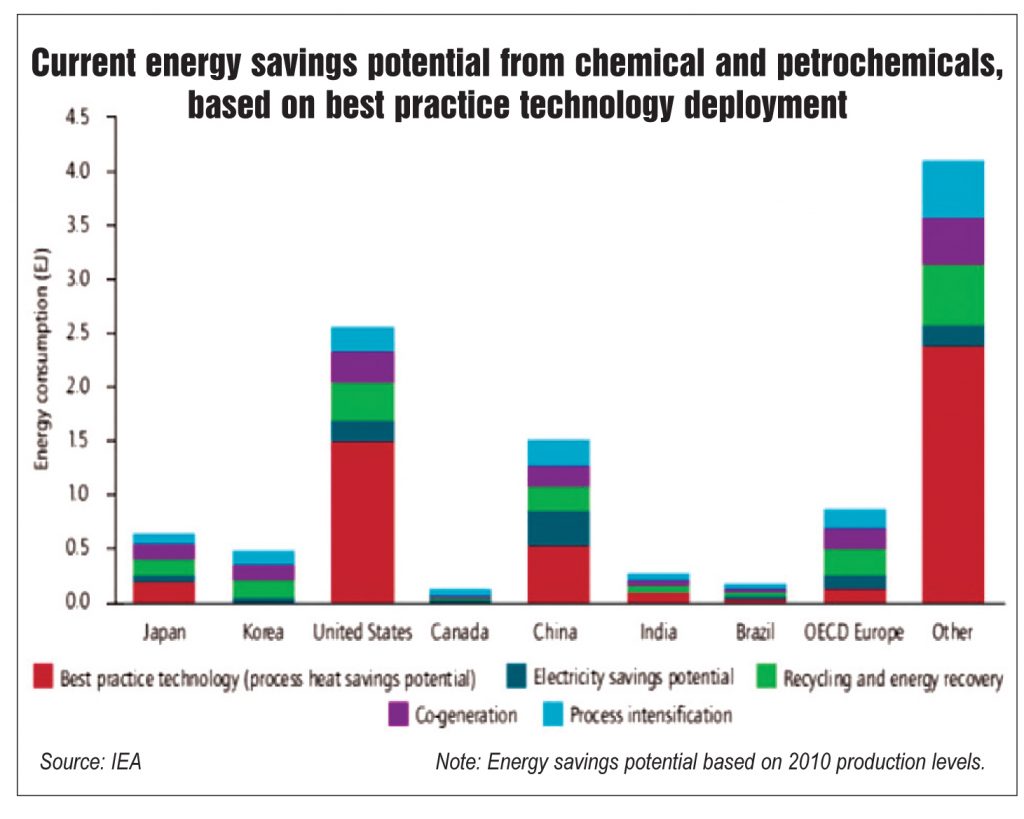 One of the eight identified missions under the National Mission on Enhanced Energy Efficiency (NMEEE) is the PAT scheme, which is a market-based mechanism to enhance energy efficiency by providing specific energy consumption targets with an option to trade the additional energy savings in the form of energy saving certificates. The Bureau of Energy Efficiency (BEE), under the Ministry of Power, has implemented this scheme in eight industrial sectors in the first phase, which includes the chlor-alkali industry. (The size of the Indian chlor-alkali sector at 3.3 million tonnes is 4 per cent of the world market.) To become a designated consumer (DC) under the PAT scheme, the notified threshold limit for the chlor-alkali industry was 12,000 tonnes of oil equivalent (toe) of energy consumption per annum. By the end of the first PAT cycle, energy savings equivalent to 0.093 mtoe annually were achieved, which was around 72 per cent higher than the savings targets of 22 notified DCs for the industry.

Under PAT Cycle II, 24 DCs are now covered in the chlor-alkali industry, with an energy savings target of 0.101 mtoe assigned to it. To widen coverage, in November 2017, the central government, in consultation with BEE, notified 12 energy-intensive industries as DCs for PAT Cycle IV, which now includes the petrochemicals industry as well. Petrochemical units with gas crackers or naphtha crackers or both, and with energy consumption of 100,000 mtoe per year and above, are included as DCs. 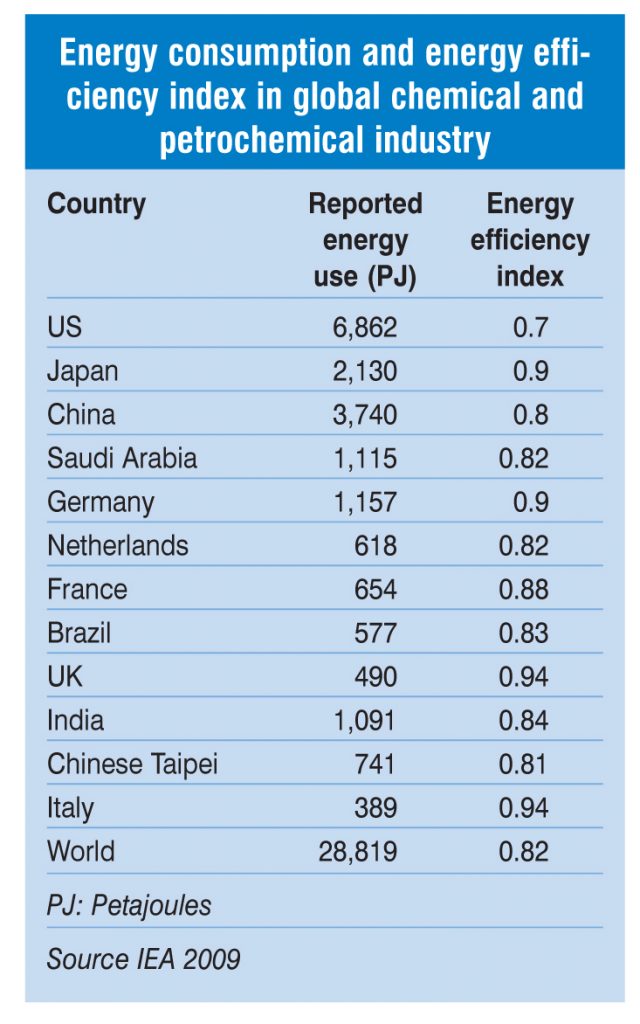 Apart from the implementation of best practice technologies (BPTs) in chemical processes, there are further opportunities for reducing energy use and CO2 emissions in the short to medium term. These are process integration, combined heat and power (CHP), recycling and energy recovery.

CHP offers significant, economy-wide energy efficiency improvement and emissions reduction. The country’s existing system of centralised electricity generation charts an unsustainable energy path, with increasing fuel consumption and carbon emissions, while continuing to waste over two-thirds of the energy contained in the fuel. At least half of this wasted energy could be recaptured if the country shifts from centralised generation to distributed systems that cogenerate power and thermal energy. Besides saving energy and reducing emissions, distributed generation addresses emerging congestion problems within the electricity transmission and distribution grid.

CHP also represents an opportunity to make significant progress towards meeting the country’s Kyoto commitments on greenhouse gas reductions. The local air quality improvements and opportunities for economic growth presented by CHP are equally compelling. CHP presents an opportunity to improve the “bottom line” for businesses and public organisations, while also providing a path for improving the environment.

The private sector also needs to take a leadership role. The primary barriers to greater CHP use are regulatory and institutional, not technical or economic. The private sector must work with government regulators and policymakers to ensure that competition and incentives for innovation are encouraged, while creating a favourable regulatory environment for CHP. And the private sector should actively pursue the adoption of CHP — for both environmental and bottom-line benefits.

All industrial plants that use steam, electricity, air-conditioning and chilling, and that have access to natural gas, biogas or liquid petroleum gas, or coal/renewable fuel, and can utilise heat (which can be in the form of steam, hot water, oil or hot air) can set up CHP plants. 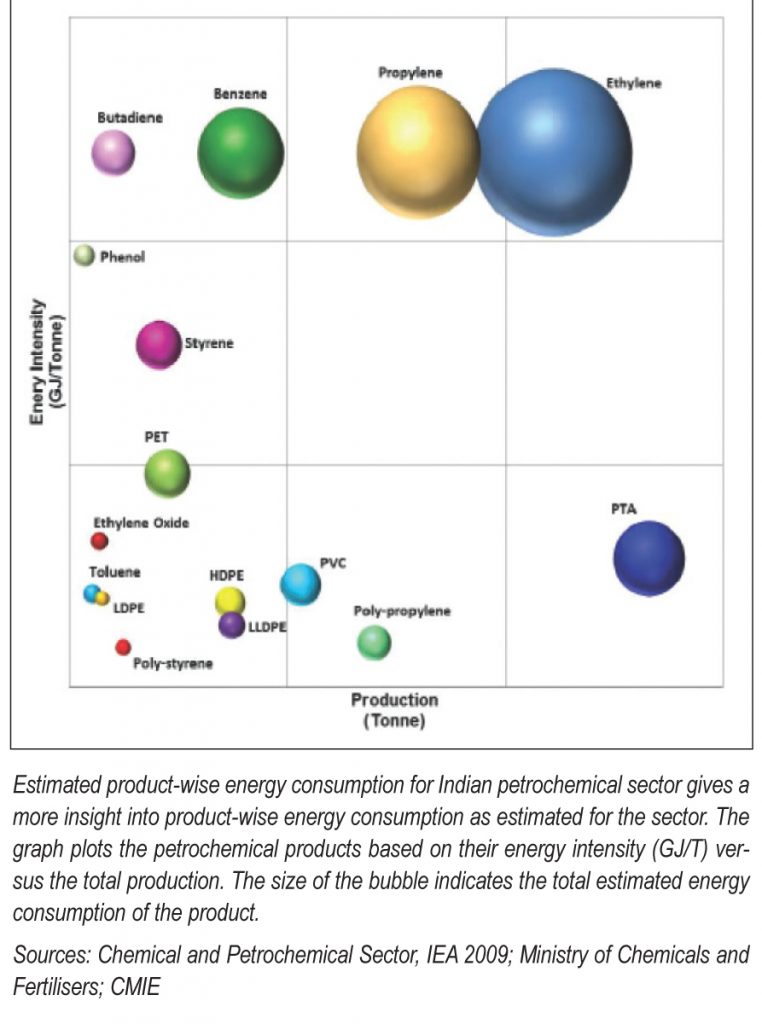 Shriram Alkali & Chemicals, Jhagadia at Bharuch, Gujarat, is located on a large-scale industrial estate developed by the Gujarat government especially for “water-intensive chemical industries”. It has been operating since March 1996. The technology used is membrane-cell-based, with caustic soda production of 171,000 tonnes per annum (tpa). It installed a captive power plant of 55 MW, based on coal. It studied its energy consumption patterns and, with inputs from experts/staff, carried out several energy efficiency measures relating to the processes and operations. During the period 2011-12 to 2014-15, it reduced its energy consumption from 9,747 kCal per tonne of NaOH to 8,631 kCal per tonne of NaOH. 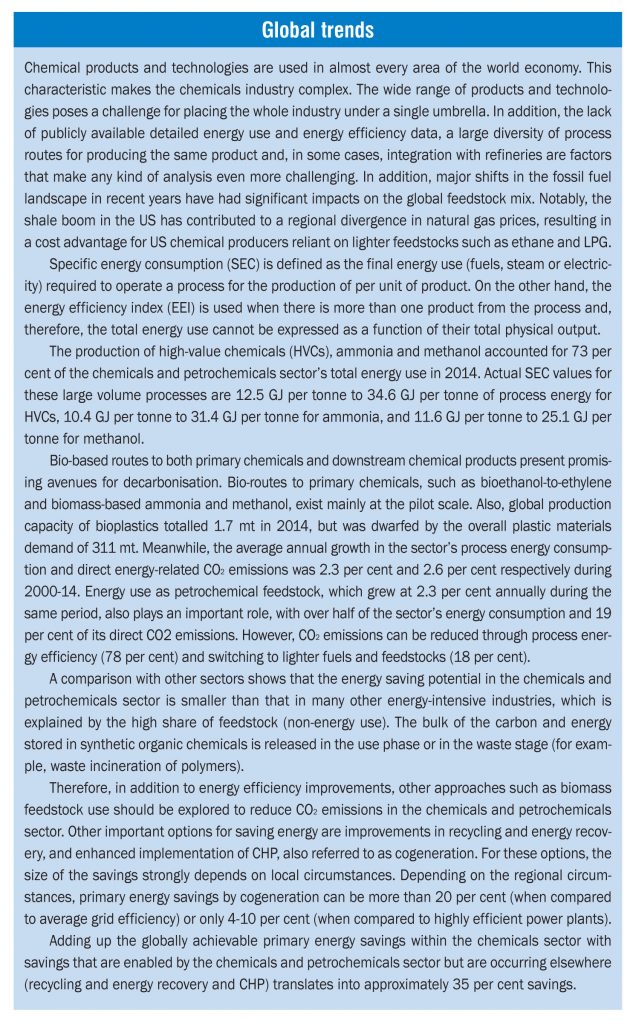 Two sector-specific mitigation options should be given priority in the short-to-medium term. The first is fostering best practices among the existing plant operators to lower energy and emissions intensities for key production processes. The second is removing barriers to enhancing resource-efficient production and waste treatment. As per Vivek Taneja, Thermax, “Input primary energy can be optimised by an effective play of renewables with trigeneration options. Using trigeneration options can increase the power plant efficiency of a right-sized plant up to 90 per cent as compared to conventional power plant efficiency of a mere 35 per cent or so. Waste heat and industrial waste usage can be additional levers, if used effectively, and in synergy with others. The main mistake most industries make is to look at each process in a siloed approach and not in an integrated manner. It is important that experts with experience and know-how across power generation, plant maintenance, heat and mass transfer across various processes and industries, energy efficiency, resource efficiency and in-depth knowledge of waste-to-wealth options, assess the plant and then offer solutions.”

Since achievable CO2 emission reductions are in the order of 20-35 per cent based on unchanged current fuel use and feedstock mix in the chemicals and petrochemicals sector, progress must be made primarily on data availability and data quality to assess accurate potential and take necessary steps. Also, there is an urgent need for global benchmark data, ideally for approximately 50 to 100 most energy-intensive chemicals. Besides the appraisal of policy initiatives, stronger collaboration is required between energy experts in companies and energy statisticians in order to improve the quality and international consistency of production and energy statistics. Moreover, available statistics fail to provide insights into the breakdown of power use of the sector. As per Deepak Zade, senior vice-president (energy and carbon services), MITCON, “Energy audits can help the industry in identification of areas of improvement in the overall energy performance of complex chemical/petrochemical plants, and ISO-50001 is a great tool for an effective and sustainable energy management system. The good news is that in the last decade, the industry has focused more on energy efficiency, that is, adoption of energy efficient equipment, cogeneration through CHP, waste heat recovery, and use of renewable energy, which has improved the overall energy performance.”

To conclude, there are important tasks ahead for authorities, and the sector to raise the quality of energy and CO2 data collection and methodology to a level comparable with other sectors, notably iron and steel, aluminium and cement.