There has been a long-standing debate in the power sector regarding the deployment of measures to improve power quality and grid reliability. Among the array of solutions that have emerged to cater to the dynamic needs of the grid, a promising one is microgrids. Microgrids have gained momentum as they offer uninterrupted power supply and can help in the global commitment to electrify the rural segment.

Further, as technologies become cheaper, flexible and reliable, microgrids are poised to become an integral part of the global energy industry, bringing about transformation, especially in developing countries where access to electricity is limited. According to the thirteenth edition of the Microgrid Deployment Tracker published by Navigant Research in December 2017, over 20 GW of microgrid projects or project portfolios have been identified worldwide. Of the global share, Asia-Pacific leads, followed by North America. In the former case, the microgrids are mostly remote, off-grid systems, whereas in the case of the latter, the microgrids – particularly those in the US – tend to be connected to a utility grid.

A look at how microgrids are being deployed globally…

In Africa, the majority of the rural population lacks access to electricity due to the absence of an enabling grid infrastructure. Owing to the costs involved in setting up grid infrastructure in remote locations, microgrid technology is increasingly being deployed to address power supply issues. As per industry estimates, approximately 150 commercial microgrids are currently operating in the whole of sub-Saharan Africa and this number is expected to reach 7,000 by 2021. Commercial enterprises such as mines and shopping malls in the continent are also turning to microgrid investments in an attempt to lower their energy costs, diversify sources of supply and ensure price certainty.

The concept of microgrids has also been picking up in remote villages. A case in point is the Entesopia village in Kenya. The village is powered by an 8.5 kW modular solar microgrid and supplies electricity to more than 60 homes and businesses including a petrol pump operator, a small cinema hall and a number of welding shops. Kenya is expected to emerge as a high growth potential market with nearly 2,000-3,000 microgrids by 2021. Further, there are many other communities in the continent, that have been relying on microgrid solutions to meet their daily energy needs.

A number of internationally supported and funded initiatives promote microgrids and assist the development of the sector in Africa. The British and French development agencies Department for International Development (DFID) and Agence Française de Développement (AFD) offer a “Green Minigrids” Euro 30 million support facility for developers in the East African region. Another important initiative is “Power Africa” by USAID, which caters to microgrids under their “Beyond the Grid” category.

The government is also taking active interest in spurring investment in this segment. Mozambique, for instance, recently invited investors to participate in the development of $500 million off-grid renewable energy projects, including mini-grid and microgrid projects, in remote areas across 10 provinces. 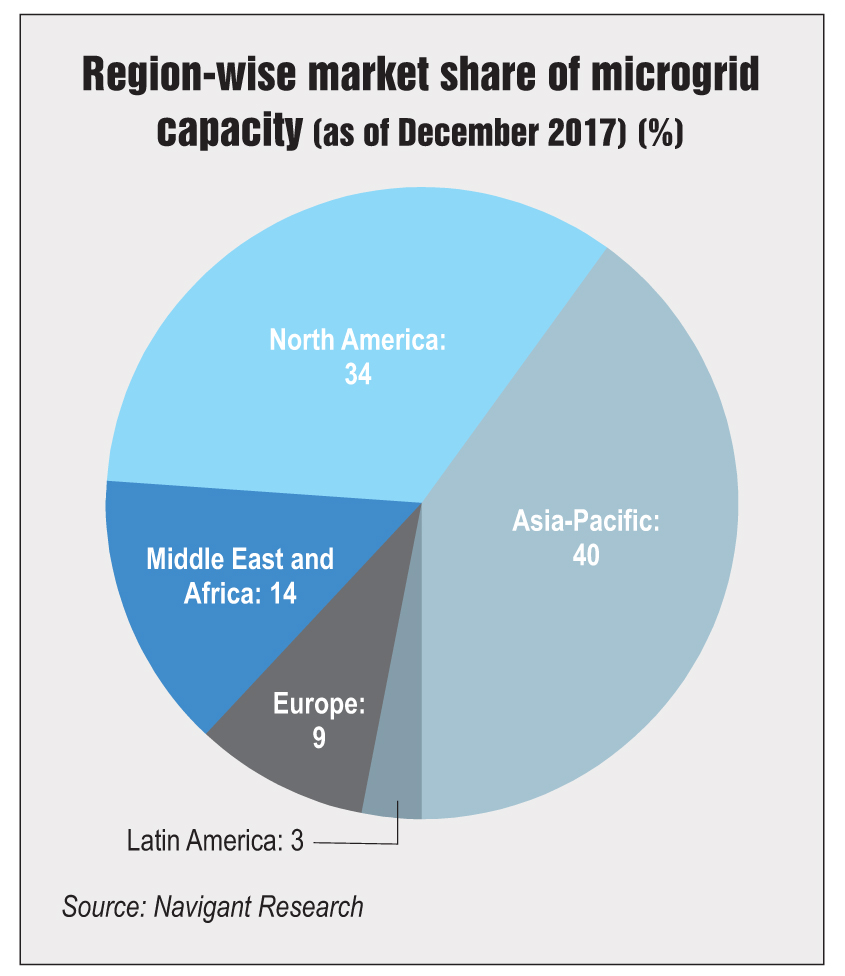 In 2010, China’s National Development and Reform Commission mandated the development of efficiency programmes and load management systems to ensure enhanced annual electricity savings. This, coupled with the country’s commitment to reduce its carbon dioxide emissions by 2030, has been the driving force behind the development of renewable energy-integrated microgrids in the country.

In 2015, the National Energy Administration (NEA) introduced a programme for developing 28 microgrid demonstration projects. The objective of these demonstrations was to showcase plausible technologies and understand the benefits of microgrid technology better. One of the most successful demonstrations was the Tianjin eco-city microgrid. The project was focused on enhancing renewable energy integration through microgrids.

The country’s first microgrid commenced operations in Beijing in early 2016. The project comprises three wind turbines and numerous solar panels located in the incubator in the Badaling economic zone. The microgrid supplies electricity to some or all of the incubator’s electric equipment. In addition, during the same year, the country also connected its largest solar plus storage microgrid to the grid in Tibet. Moving forward, China plans to install 4,000 MW of new microgrid capacity by 2020.

Contrary to the belief that microgrids are more suited to underdeveloped/ developing nations, Canada has achieved significant success in the microgrid space. The country has been actively involved in the development of microgrids in areas occupied by remote indigenous communities. In 2016, the Sustainable Development Technology Canada (SDTC), the clean technology funding arm of the Canadian government, announced a $12.4 million project to link three widely dispersed microgrids in Toronto, Nova Scotia and Maine. The project, aimed at creating a microgrid of microgrids, was majorly funded by private players with SDTC contributing $4.1 million. Each of the three projects deployed software to make the linking process easier.

A recent development in the segment has been Ontario Power Generation’s plan to develop a solar and battery storage microgrid for the Kiashke Zaaging Anishinaabek/Gull Bay First nation in Ontario. The project is an attempt to significantly scale down diesel consumption by the tribal community by more than 29,000 gallons per year. This, in turn, is expected to reduce the annual carbon emissions by 340 tonnes. The installation is a part of a larger initiative of making electricity accessible to the indigenous communities of the country.

The experiences across countries highlight that the microgrid concept is gaining popularity across the globe, spanning the underdeveloped, developing and developed nations. While the basic purpose of installing microgrids remains the same, the issues targeted and the approaches chosen differ. In underdeveloped nations, microgrids offer an alternative source of electricity supply in a cost-effective framework. The main objective is to ensure electricity access in remote and isolated areas.

However, the issues faced in the implementation of microgrids pertain to financial constraints and lack of advanced technological offerings. Developing naions, on the other hand, face the challenge of ensuring that microgrids match up to the constantly evolving technological solutions. Further, microgrids are expected to function as parallel systems for third world countries, complementing the major grid and not substituting it. The developed countries offer an interesting insight. While the purpose of installation for first world countries to the scale varies considerably. Microgrids in the developed countries are equipped with advanced technological features and primarily attempt to address last-mile connectivity issues. For these nations, the larger objective is the seamless integration of microgrids with the national grid.

Microgrids hold immense potential for transforming the global energy landscape. India, in particular, can learn important lessons from the microgrid experiences across the world. In the backdrop of the country’s commitment to electrify all households, and ensure reliable and quality power supply to all its citizens, microgrids can play a strategic role in attaining these objectives. However, government involvement is the key. The deployment of microgrids at the local/community level would require government involvement, both from a financial as well as a planning perspective. Collaboration at the domestic and international level will be central to the large-scale deployment of microgrids in the country.